After a turbulent past, Vietnam has now become a major tourist destination and rightly so. It is a country of breathtaking natural beauty to which can be added a rich historical heritage experienced through interesting sites, all to be enjoyed on a Vietnam vacation. Vietnam is approximately the same size in area as Germany. Its coastline extends some 3445 kilometres/2140 miles along the eastern seaboard on the South China Sea. Inland, mountains and tropical forests each make up 40 % of the total landscape.

Why Consider a Visit to Vietnam?

It is a very safe, friendly country and locals enjoy visits from foreigners on Vietnam tour packages. The principal religion here is Buddhism. Festivals play a large part in Vietnamese life ranging from family gatherings to national celebrations.  It is also a very diverse destination. The major cities of Hanoi, Hue and Ho Chi Minh City (formerly Saigon) all have their own unique character. Breathtaking scenery can be found everywhere from beautiful Halong Bay to the lush Mekong Delta. Vietnam has several beach resorts which are second to none. History abounds from the ancient Cham civilization right up to the fairly recent Vietnam War. All this and more will certainly attract the curious and discerning visitor.

What Are the Best Cities to Visit in Vietnam?

The best starting point is Hanoi, the country’s capital, known for its century’s old architecture and a rich culture with South-East Asian, Chinese and French influences. The latter influence is responsible for the city’s sweeping wide boulevards and the popularity of coffee and croissants. Tree-fringed lakes, ancient pagodas and quaint old quarters add to the charm of Hanoi.  The Ho Chi Minh mausoleum is a very special place for the Vietnamese. This is contained in a complex which also houses his former home, the Presidential Palace and the Ho Chi Minh Museum. In the centre of Hanoi is a delightful island in the middle of Hoan Kiem Lake. Here you will find Hanoi’s most visited temple reached by a small bridge.  An intriguing venue is the former Hoa La Prison, ironically originally nicknamed the “Hanoi Hilton” with its exhibits pertaining to Vietnam’s 20th Century war involvement. The Temple of Literature, founded in 1070, is an example of well-preserved traditional Vietnamese architecture and the One Pillar Pagoda, built of wood and originally constructed in the 11th century, is designed to resemble a lotus blossom. While in Hanoi, one should definitely undertake a trishaw ride and attend a performance of a unique water puppet show on Vietnam vacation packages.

Ho Chi Minh City, formerly Saigon, is a bustling and busy metropolis and is known for its French-colonial architecture which includes the Notre Dame Cathedral. At the same time, one can view both the present with designer malls and skyscrapers and the past with the alleyways, markets and temples that abound everywhere. While in Ho Chi Minh City, a must-visit on a Vietnam vacation is the Cu Chi Tunnels, a network of underground tunnels where the Viet Cong hid during the Vietnam War. At one time, there were 250 kilometres/155 miles of tunnels under the ground. The network, parts of which were several storeys deep, included trapdoors, constructed living areas, storage facilities, weapon factories, field hospitals, command centres and kitchens. 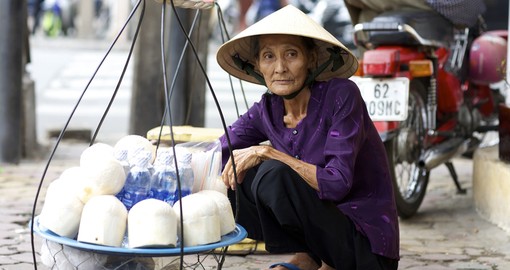 Hue was the seat of the Nguen Dynasty Emperors and former capital of Vietnam. Its major attractions are the 19th Century Citadel or Imperial Palace modelled after the Imperial Palace in Beijing and the several interesting tombs of former emperors dotted around the city mainly located on the Perfume River. One can enjoy a pleasant short cruise on the river to visit many of the tombs. Not far from Hue is the port of Hoi An with its atmospheric old town and winding, narrow streets and which also has attractive beaches to enjoy on Vietnam tour packages. Not too far from here is the archaeologically interesting ancient Cham civilization site of My Son.

Halong Bay is arguably one of the most fantastically beautiful places on earth with its more than 2000 islands rising up from the emerald waters of the bay. It is a UNESCO World Heritage site and is breathtakingly beautiful, with pristine beaches, limestone caves, inland lakes and floating villages. It is enhanced by towering limestone pillars and tiny islets on top of which is forest. The backdrop dramatically rises from the emerald lake water. One of the best ways to enjoy Halong Bay on an Asian vacation is on board a cruise vessel which can be for half a day or a cruise with accommodation for as long as 2 nights. You will sail by amazing caves and grottoes with stalactites and stalagmites. You can explore Halong Bay on a Chinese-style junk or a high-speed boat. No matter which way you view it on a Vietnam vacation, you will marvel at the emerald waters, the impressive rock formations, and the majestic beauty of Halong Bay.

Tours and Travel to Halong Bay

In the Central Highlands is where one can stay in the French-established hill resort of Dalat centred around a lake and a golf course and surrounded by hills, pine forests, lakes and waterfalls. It is known as the “City of Eternal Spring” for its distinctive temperate climate. The scenery in Dalat is very different from much of the rest of the country.

Located in south western Vietnam, the Mekong Delta is a network of distributaries emptying into the South China Sea from the Mekong River. Much of life in Mekong Delta revolves around the river with some villages accessible only by boat. Agriculturally rich, the Mekong Delta provides lush rice fields, yielding half of Vietnam’s supply of rice. In addition, dubbed as a ‘biological treasure trove’, the Mekong Delta features over 10,000 new species discovered in previously unexplored areas, all adding to the attraction of a Vietnam vacation. The Mekong Delta’s largest city, Can Tho, is the economic, cultural, and scientific centre of the region and is noted for its floating market, rice-paper-making village, and picturesque rural canals.

More information on travel through the Mekong Delta

The hill resort of Sapa is 4 hours away from Hanoi. A special train will take you there on an overnight journey. Established by the French, it is a town offering spectacular views of the surrounding valleys and rice paddies with mountains towering above on all sides.  It is here that you can find the colourful hill tribe people.

The Excellent Beaches of Vietnam

While on a Vietnam vacation, there are a number of attractive and pleasant resorts to choose from. Phu Quoc Island, the largest island in the country located in the Gulf of Thailand, is known for its idyllic beaches, fabulous sunsets, and tranquil atmosphere. The north of the island is made up of a UNESCO World Heritage-recognized national park. The south is where to find the beaches, some luxury resorts, as well as beachside activities. Inland, you can explore traditional villages, nature parks, and Buddhist pagodas. Nha Trang is located on the east coast surrounded by majestic mountains. This former fishing village is well-known for its beaches and seafood. Known as the “Riviera of the South China Sea,” it boasts miles of uncrowded beaches, offshore islands, and coral reefs. You can enjoy boat rides to the untouched small outer islands. Phan Thiet is both a fishing village and a beach resort located in south eastern Vietnam. Visitors will be immediately struck by the hundreds of colourfully-painted fishing vessels in the harbour. Mui Ne’s long beach here features pristine white sands and is great for walks or enjoying spectacular sunsets.

The most notable festival is Tet, the Vietnamese New Year which lasts for seven days and falls sometime between the last week of January and the third week of February. It is a time when families get together to celebrate renewal and hope for the upcoming year. The majority of other festivals take place in spring with a second flurry happens in the fall.

Enjoy the Cuisine in Vietnam

The cuisine of Vietnam is considered to be quite nutritious and healthy. Rice is a staple of most meals and cooking methods include grilling, frying, boiling and steaming. The colonial past of the country is reflected in the food with the north hosting a strong Chinese influence while the Hue area is spicier and has been influenced by the French and dishes in the southern parts of Vietnam tend to be hot and spicy. 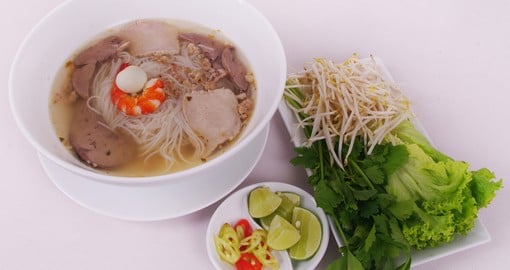 The best time to visit Vietnam is in spring, from February to April and the fall, August to October as the temperatures are moderately lower and the rainfall is lighter. Hanoi and North Vietnam have distinct winter and summer seasons. The cold but mostly dry winter lasts from November to April with the coolest months being January to March. Summer is from May to October when it is hot and humid and the area has its highest rainfall. The central coast is influenced by the northeast monsoon. Nha Trang has a wet season which begins in November and continues through to December. Hue and Hoi An have rain from September to February. The best time to visit these places is February to May. It gets very hot from June to August. Southern Vietnam has a dry season which lasts from December to late April or even May. The rainy season is from May to November. However, you only experience brief afternoon downpours. The climate of the central highlands including Dalat has cooler temperatures, especially at night.

What Type of Tours are Available in Vietnam

You can choose from a private guided tour or take one of our pre-arranged classic tours visiting the highlights. Stopover packages are available, all combinable, for Hanoi, Ho Chi Minh City, Hue and Hoi An plus the hill stations of Dalat and Sapa. Cruises can be taken in Halong Bay or the Mekong Delta. The beach resorts of Phan Tiet and Nha Trang offer add-on stays to enhance your Vietnam vacation. For history buffs, there is a   tour of the Battlefields.

A Perfect Week in Vietnam

The Best Ways to Explore Halong Bay in Vietnam

Thailand and Vietnam: The Perfect Introduction to Southeast Asia

At Goway we believe that a well-informed traveller is a safer traveller. With this in mind, we have compiled an easy to navigate travel information section dedicated to a Vietnam package.

Learn about the history and culture of Vietnam, the must-try food and drink, and what to pack in your suitcase. Read about Vietnam's nature and wildlife, weather and geography, along with 'Country Quickfacts' compiled by our travel experts. Our globetrotting tips, as well as our visa and health information will help ensure you're properly prepared for a safe and enjoyable trip. The only way you could possibly learn more is by embarking on your journey and discovering Vietnam for yourself. Start exploring… book one of our Vietnam tours today!

FIRST-CLASS | PRIVATE-GUIDED: Experience the essential highlights of Vietnam. Travelling north to south, you’ll explore the colonial avenues of Hanoi, cruise beautiful Halong Bay, see imperial treasures in Hue, relax on the beach in Hoi An, and learn about the history of the Vietnam War in Hoi Chi Minh City.