FIRST-CLASS | PRIVATE-GUIDED: A combination of three totally different aspects of Thailand – lively Bangkok with its Grand Palace and temples, Chiang Mai with its quiet charm and scenery and Ko Samui, a charming beach resort. 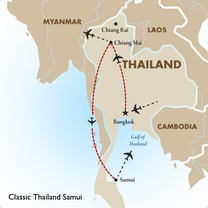 Thailand is often called the land of smiles and rightly so. The people will make an impression on you with their gentleness and polite, respectful approach. Perhaps this involves the major religion here, Buddhism which is all pervasive. However, besides the people, the visitor can enjoy a wide variety of experiences.

It might be helpful to consider Thailand as having 3 distinctly different areas of interest, namely Bangkok, Northern Thailand and the Southern beaches.

Your stay begins with a visit to the renowned Grand Palace, the former residence of Thai kings. In this complex, you will be able to relive the splendour and pageantry of the past. A highlight will be the impressive Emerald Buddha. After this, continue to Wat Po, one of the oldest and largest temples in Bangkok where the large Reclining Buddha is housed. In the evening, you will have an enjoyable cruise on the Chao Phraya River which traverses the city with spectacular sights to be experienced on both banks including the Temple of Dawn, the Grand Palace and many other interesting landmarks. During the cruise, Thai delicacies will be served.

The following morning, head outside the city to Damnoen Saduak to see the colourful floating market where the customers travel in their boats to the merchants who are lined up on the sides of the canals selling their wares. Also visit the tallest Buddha pagoda in the world, the Phra Pathom Chedi. After lunch at the nearby Rose Garden, you will be entertained by a Thai cultural show including music, singing and the martial arts. Return later back to Bangkok.

Chiang Mai is the principal city in the north surrounded by the highest mountains in the country and here the atmosphere is much more serene than Bangkok. It has a wall surrounding the old part of the city and also has over 300 temples. Chiang Mai, "The Rose of the North", is famous for its history, culture, ancient temples, lush hills, shopping and fascinating tribal people.

During your stay, visit the Wat Chiang Man Temple, the oldest in the city built in the 13th Century with its two statues of Buddha, one of which is made of crystal, the Wat Phra Singh, built in Northern Thai classical style with its exquisite wood carvings and the Wat Chedi Luang with its Lama style chedi (a conical shaped stupa). The last temple to be visited is the Wat Suan Dok built in the 14th Century and one of the most famous for Monk studies. After this, head to the Varoros Market, the expansive market where you can buy almost anything. The afternoon is free to explore further, shop etc.

The next morning, travel outside the city to Doi Suthep, a temple built on top of a mountain with amazing views of the surrounding countryside and even Chiang Mai in the distance. After this, visit a hill tribe village and meet the Hmong tribe close up with their colourful ethnic outfits and special way of life.

Fly the next day to the south of Thailand to the beach resort of Ko Samui, your home for the next 3 nights. Ko Samui is the third largest island in Thailand measuring 25 kilometres/15 miles long by 21 kilometres/13 miles wide. It is an island of natural beauty offering white sand, coral reefs and many coconut palms. There are several beach areas from which to choose. The best known are Chaweng (most developed with good nightlife), Lamai (similar to Chaweng), Bophut (laid-back with its colourful fisher’s village) and Mae Nam (scenically beautiful).

The day after arrival, travel by boat to Ang Thong National Park northwest of Ko Samui. It is a marine park consisting of 40 plus islands all different in size and shape of which only two are inhabited. Experience caves, hidden lagoons, steep limestone cliffs and white sand beaches. Arrive on the main island of Wau Ta Lab where your time is your own to explore, swim, snorkel or just relax. After lunch on board, head to Mae Ko Island which is stunningly beautiful.

The following day is totally at leisure to explore, swim, relax or go shopping as you wish.

Hotel's outdoor swimming pool is located at the ground level. Other hotel facilities also include Asian-inspired treatments, fully equipped gym room, steam room, hydro pool and yoga studio. There is also a trendy style bar right next to the lobby where light snack and lunch is served as well as being a cool place to hang out in the evening. Meeting facilities are available up to maximum of 90 covers. This is one of the trendy and branded hotel from England, most suitable for individual travellers. This design hotel is located at the north of Sathorn road, parallel to famous Silom Business district. It takes approximately 10-15 minutes drive to the riverside and close to famous shopping night bazaar at Patpong and Suanlum night bazaar within 10 minutes walk. Distance from Suvarnabhum Airport takes average 45 minutes by expressway. Endlessly airy and filled with natural light, these rooms are what make us a Bangkok business hotel with style. Each City Room (a number of which can be interconnected to Metropolitan Rooms) reflects our clean-lined aesthetic with Makha wood and cossetting textures. Size: 26 - 39 m2 / 280-420 sq.ft.

This morning, you'll be collected from your hotel at 8:00am to go behind the scenes for a closer look at Thailand's Buddhist culture. Start the morning with a trip to Wat Pho which is one of Bangkok's most enchanting temples. Arrive just as the resident monks gather for their morning chants and witness this deeply spiritual ritual to gain a better sense of Thailand's Buddhist heritage.

After the chants, take a walk around Wat Pho and see the vast collection of religious treasures on display. Admire the famed reclining Buddha image, which stretches 45-metres in length. Learn about the symbolism of the Buddha's intricate footprint and witness devotees making offerings to this revered image.

Your tour then continues to the nearby Grand Palace, which has served as the seat of Thailand's revered royal family for more than two centuries. Take a walk around the vast grounds, stopping in to explore the various temples, throne halls and museums within the compound. Visit the Emerald Buddha, the most revered Buddhist image in Thailand, and hear about its mysterious origins.
Following your tour of these iconic Bangkok monuments, you'll be returned to your hotel.

Take a loved one on a memorable and romantic evening cruise through the glittering city of Bangkok. Enjoy a sumptuous dinner while gazing at stunning iconic sights such as the illuminated Temple of Dawn and Grand Palace.

You'll experience the romance of Bangkok in style on the luxury Manohra rice barge cruise that has been converted into one of Bangkok's finest dining venues as you cruise along the Chao Phraya River. From the stunning Temple of Dawn, the illuminated Grand Palace, magnificent temples, striking bridges and other Bangkok's landmarks, this cruise offers a truly memorable evening experience in Bangkok.

While cruising down the river, you'll enjoy a sumptuous five-course dinner.

Following your cruise, you'll be returned to your hotel.

Half Day Klongs with Temple of Dawn & Royal Barge Museum

Today, be met at your hotel by your guide and take a longtail boat through Bangkok's canals to discover the true heart of the city. Start with a ride along the Chao Phraya River, also known as the 'River of Kings'. Admire the passing skyline where glittering pagodas stand in the shadows of towering skyscrapers. The boat then turns off the main waterway and onto the canals, or 'klongs'. See why Bangkok is often called the 'Venice of the East', while cruising along the intricate network of canals. Capture glimpses of small villages on the water's edge and enjoy the slower pace of life away from the city centre.

Make a stop at the Royal Barge Museum. See the eight spectacular boats used by Thailand's royal family to mark special occasions. Carved from teak and intricately decorated with gold leaf and mosaics, the barges are a truly impressive sight.

Afterwards, return to the boat and cruise back onto the Chao Phraya for one final stop to see Wat Arun, a 79-metre-high pagoda built in a style similar to Angkor Wat. Meaning 'Temple of Dawn', Wat Arun is one Thailand's most beautiful temples and the perfect last stop on the day's tour.

Following your tour, you'll be transferred back to your hotel.

Today, be met at your hotel by your guide and venture away from the city centre of Chiang Mai for an insightful look at Thailand's rich culture. Start with a visit to Wat Phra That Doi Suthep. Situated on a mountain rising high above the city, this sacred pagoda offers fabulous views of Chiang Mai and its surroundings. Walk up the stairs to see the exquisite gilded stupa and learn about Thai Buddhist beliefs.

Afterwards, continue higher into the hills, traveling by songtaew, a local truck. Drive along rough dirt roads to the Chang Khien Coffee Research Project. Enjoy a fresh cup of locally-grown Arabica coffee and hear about the North's flourishing coffee industry.

It's a short drive onwards to a village inhabited by the White Hmong hilltribe. Spend time exploring the village, meeting the inhabitants and learning about the traditions and customs of this unique ethnic group.

Following this insightful village visit, return to the songtaew and drive back to Chiang Mai. You will be transferred back to your hotel at the end of your day tour.

This evening, enjoy a lively night in Chiang Mai, wandering through the South Gate of the old city to the traditional street food market.

During the walk, you will be tempted by the delicious aromas emanating from the various food stalls and simple carts. Your guide will be on hand to introduce the many local dishes on offer. And of course, you will be able to try all the dishes you fancy. Some of the local specialities include deep fried pancakes, deep fried taro, kanom jeen (rice noodles with curry soup), kanom krok (Thai coconut pudding), noodle soup, pad Thai, and the summer favourite of sweet mango with sticky rice. You might also have an opportunity to sample the local rice whisky.

After the evening's gastronomic adventure, you'll be returned to your hotel with your stomach filled with delight.

Belmond Napasai in Koh Samui, Thailand is a secluded luxury beach resort in Maenam Beach, on the fashionable north coast of Koh Samui. Accommodation comprises a selection of beautiful Koh Samui-style private cottages and bungalows some with private pools.