Delve into the scenic delights of New Zealand with a small group of fellow explorers. Combine natural beauty with creative comforts as you overnight in the rainforests of Franz Josef at the foothills of Mount Cook and journey into the far south to the wild and pristine landscapes of Stewart Island. 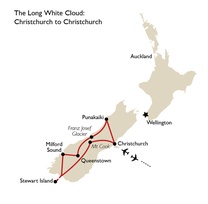 This 12-day motorcoach tour is an intensive exploration of New Zealand, taking in all of its major islands and cities.

Christchurch is the largest city on the southern island of New Zealand with a population of just under 400,000. The city is still rebuilding from the earthquakes of 2010 and 2011 that devastated most of its historical sites. While the city remains in the process of redevelopment (with some great pop-up projects for urban explorers to discover), its Botanical Gardens, Canterbury Museum, and International Antarctic Centre are still great highlights, undamaged by the quakes.

From Christchurch head to Punakaiki on the TranzAlpine Train and see the famous Pancake Rocks at Dolomite Point. These limestone rock configurations on the coast turn into vertical blowholes at high tide. Continue on to Franz Josef Glacier, which explorer Julius von Haast named after the Emperor of Austria and Hungary in 1859. Close to Franz Josef is Mount Cook or Aoraki, the highest mountain in New Zealand. It’s a popular spot for experienced climbers due to its extreme difficulty.

In Queenstown on the shores of Lake Wakatipu in the Southern Aps, you can satisfy your wildest outdoor ambitions. Skydive from airplanes, bungie jump from bridges or jet-ski across the waters. You can also slow down the pace by visiting the historic mining towns or vineyards around the valley, or by enjoying the many golf courses and spas in town. Nearby Milford Sound is one of the top travel destinations on the planet. This fjord in southwestern New Zealand is just stunning from Mitre Peak (Rahotu) to the open sea. No surprise Mitre Peak is the most photographed mountain in the country! In fact, Rudyard Kipling once dubbed Milford Sound as the Eighth Wonder of the World.

In New Zealand’s far south, Stewart Island is almost entirely a conservation area. Only 381 people live on the island, mostly in the sole settlement of Oban. The jungles of Rakivra National Park make up the rest. Stewart Island is the best place in the world to see the reclusive kiwi bird in its natural habitat.

Return to the mainland, sweeping in for a closer look at Mount Cook as you spend the night at Aoraki, just a few miles from the mountain’s peak. Return to Christchurch for your onward flight the following day.

On arrival in Christchurch you will be transferred by private car to your hotel. Spend some time at leisure to relax or explore on your own. Perhaps visit the International Antarctic Centre or Orana Wildlife Park, New Zealand's only open-range zoo. This evening, join your Journey Director for Welcome Reception.

It's all aboard the TranzAlpine train. Rated as one of the world's great scenic railway journeys, you'll travel in comfort across the Canterbury Plains through the Southern Alps. From Arthur's Pass, visit the small town of Hokitika, the heritage and cultural centre of the West Coast, and meet a local greenstone (jade) carver for a jewellery demonstration. Later we continue to Franz Josef. Your eco-friendly accommodation is set amid native bush, with an emphasis on relaxation and rejuvenation. This evening, why not enjoy Franz Josef's local geothermal hot pools or perhaps a massage?

After a relaxed start we explore this area, where a local guide explains the history behind the mighty Franz Josef Glacier. Later, you may want to get up close and personal with the glaciers on a helicopter flight. Your flight will hover over the snow face and may land high up in the valley so that you can walk across the ice fall - subject to weather conditions (optional experience - at own expense).

This morning it's time for an adventure as we travel in a purpose-built fully enclosed river jet boat and journey down the Haast River. After a lunch stop at Makarora we head to Queenstown, taking time to stop to explore the historic gold-mining village of Arrowtown on the Arrow River, with an orientation tour on arrival. Tonight, dinner is included at your hotel.

Today is your choice of sightseeing, you could join a wine tour, view The Lord of the Rings film locations and scenery of Queenstown and Glenorchy on a scenic tour or spend time having a relaxing massage in the spa.

Make the most of your extended stay in Queenstown. Why not sit back and enjoy a peaceful cruise across Lake Wakatipu aboard New Zealand's oldest steamship, the TSS Earnslaw, to Walter Peak Station (Optional Experience - own expense). Otherwise, you could simply relax, shop or enjoy time at one of the many cafes and restaurants while soaking up the alpine views. Tonight, we have a highlight dinner at one of Queenstown's exclusive restaurants.

Travel south along the shores of Lake Wakatipu to Te Anau on the shores of the South Island's largest lake. Later you'll travel through the rain forest of World Heritage Fiordland National Park, sighting glaciers and mountain ranges before driving through the hand-hewn Homer Tunnel to the amazing Mirror Lake. Afterwards, walk to see the Chasm on your way into Milford Sound. Tonight, stay at the magical Milford Sound Lodge, with views of the Cleddau Valley.

Wake up to the startling beauty of Milford Sound. Learn more about breathtaking Fiordland National Park with an informative talk by a local expert. Later, board the Southern Discoveries vessel for a half day exploration of Milford Sound, often called the 'eighth natural wonder of the world'. Sail out to the Tasman Sea, looking for wildlife along the way, for a visit to the Underwater Observatory and the opportunity to go sea kayaking in Harrison Cove.

We leave the majestic Fiordland National Park for the fertile sheep-dotted pastures of South Otago. Travel through Te Anau known for its beautiful lake and on to the country musical town of Gore at lunchtime, before arriving in Dunedin, New Zealand's southernmost city. Enjoy dinner tonight at Parcels Restaurant at your hotel.

This morning, join an exclusive tour of Larnach Castle. Your afternoon is at leisure. Perhaps ride the historic Tairei Gorge Railway or take a wildlife cruise of the Otago Pennisula.

Travel up the east coast of the South Island via Omarau and Timaru. Once back in Christchurch embark on a sightseeing tour of the city to learn about its rebirth after the devastating 2011 earthquake.

Say farewell to your fellow travellers as your Inspiring Journey comes to an end and we transfer you to Christchurch Airport for your onward flight.