Delve into the scenic delights of New Zealand with a small group of fellow explorers. Combine natural beauty with creative comforts as you explore Franz Josef Glacier, cruise along picturesque Milford Sound, and gaze upon the bubbling mud pools and geysers of Rotorua. 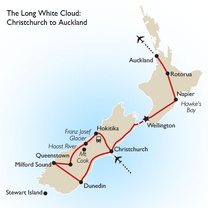 This 19-day motorcoach tour is an extensive exploration of New Zealand, taking in most of its major cities and attractions, including Christchurch, Wellington, Auckland, and Milford Sound. It features a mix of moderate and first-class accommodations, shared tours, and is a great way to see most of the country on one itinerary.

Your journey begins in Christchurch, the largest city on the South Island, which is known as the nation’s Garden City. While the city is still feeling some of the aftereffects of the 2010 and 2011 earthquakes that devastated its city centre, it has largely rebuilt and has many highlights worth visiting, including the Botanic Gardens, which rank among the best in the region. After exploring Christchurch, board the TranzAlpine Train and ride to Hokitika, where you’ll learn about jade carving, before continuing on to Franz Josef Glacier, one of the largest glaciers in the country. Spend a day exploring the frozen reaches of the glacier before hopping on board a river jet boat to ride down the Haast River and reach Queenstown on the banks of Lake Wakatipu in the Southern Alps.

Queenstown is New Zealand’s adventure capital and the perfect place to satisfy your wildest outdoor ambitions. Sky dive from airplanes, bungee jump from bridges, or jet-ski across the waters. You can also slow down the pace by visiting the historic mining towns or vineyards around the valley, or by enjoying the many golf courses and spas in town. You’ll have two days to follow your fancy before heading into Fiordland National Park, where mountains, glaciers, and fjords crisscross the landscape. There you’ll head to Milford Sound, one of the top travel destinations on the planet. This mystical fjord culminates in Mitre Peak (Rahotu), the most photographed mountain in the country. In fact, Rudyard Kipling once dubbed it the “Eighth Wonder of the World.”

Leave Fiordland National Park behind and pass into the fertile pastures of South Otago and reach Dunedin, the southernmost city in the country. Dunedin is best known for its Victorian and Edwardian architecture built during the Gold Rush of the 19th century. It’s also the gateway to the nearby Otago Peninsula, where you’ll have a chance to spot albatross and yellow-eyed penguins. You’ll have a day in Dunedin to tour Larnach Castle and then explore at leisure in the afternoon.

Connect back to Christchurch and travel along the Pacific coastline on route to Kaikoura and Picton. Then cross the Cook Strait and reach Wellington, the capital of New Zealand known as “Windy Welly.” You’ll head on a sightseeing tour to see the city’s parliament buildings and visit Te Papa, the Museum of New Zealand. You’ll have another day to explore the city in whichever way you’d like. Head to Weta Workshop to learn about the special effects and props behind The Lord of the Rings trilogy, or head on a guided walking tour to see the Victorian timber homes strung along the hillside.

From Wellington, head through dairy farmland on route to Hawkes Bay, one of the most famous wine regions in New Zealand and home to Napier, the country’s centerpiece for Art Deco. A tour will get you up to date on the earthquake that destroyed the city in the past as well as the modern wine culture that defines the city. Further north lies Rotorua, the geothermal marvel that has mud pools, hot springs, and Pohutu Geyser, which rises 30m high. The city is one of New Zealand’s main tourist hubs, as well as home to the largest population of Maori in the country. Head to the Whakarewarewa Living Village to delve into Maori culture, watch traditional performances, and enjoy a Hangi feast, which is cooked in an underground oven. Another day in Rotorua, you’ll head on a trek through the nearby redwood forest and Rainbow Springs Nature Park, where you have a chance to spot a kiwi alongside the clear mineral springs.

Continue north and stop off at the Waitomo Caves to explore an underground world lit up by bioluminescent glow worms. Your final stop is Auckland, the largest city in the country, which is consistently rated as one of the most livable cities on the planet. Join your tour group and toast your trip together with a Farewell Dinner. You’ll then say goodbye to your fellow travellers and connect to the airport to return home.

On arrival at Christchurch Airport you'll be driven by private car to your hotel. Spend some time at leisure to relax or explore on your own. Perhaps visit the International Antarctic Centre or Orana Wildlife Park, New Zealand's only open range zoo. In the evening meet your Journey Director for a Welcome Reception.

It's all aboard the TranzAlpine train. Rated as one of the world's great scenic railway journeys, you'll travel in comfort across the Canterbury Plains through the Southern Alps. From Arthur's Pass, visit the small town of Hokitika, the heritage and cultural centre of the West Coast, and meet a local greenstone (jade) carver for a jewellery demonstration. Later we continue to Franz Josef. Your eco-friendly accommodation is set amid native bush, with an emphasis on relaxation and rejuvenation. This evening, why not enjoy Franz Josef's local geothermal hot pools or perhaps a massage?

After a relaxed start we explore this area, where a local guide explains the history behind the mighty Franz Josef Glacier.

This morning it's time for an adventure as we travel in a purpose-built fully enclosed river jet boat and journey down the Haast River. After a lunch stop at Makarora we head to Queenstown, taking time to stop to explore the historic gold-mining village of Arrowtown on the Arrow River, with an orientation tour on arrival. Tonight, dinner is included at your hotel.

Enjoy Queenstown your way! Why not join a wine tour; view The Lord of the Rings film locations and scenery of Queenstown and Glenorchy on a scenic tour or spend time having a relaxing massage in the spa.

Make the most of your extended stay in Queenstown. Why not sit back and enjoy a peaceful cruise across Lake Wakatipu aboard New Zealand's oldest steamship, the TSS Earnslaw, to Walter Peak Station Otherwise, you could simply relax, shop or enjoy time at one of the many cafés and restaurants while soaking up the alpine views. Tonight, we have a highlight dinner at one of Queenstown's exclusive restaurants.

Travel south along the shores of Lake Wakatipu to Te Anau on the shores of the South Island's largest lake. Later you'll travel through the rainforest of World Heritage Fiordland National Park, sighting glaciers and mountain ranges before driving through the hand-hewn Homer Tunnel to the amazing Mirror Lake. Tonight, stay at the magical Milford Sound Lodge, with views of the Cleddau Valley.

Wake up to the startling beauty of Milford Sound. Learn more about breathtaking Fiordland National Park with an informative talk by a local expert. Later, board the Southern Discoveries vessel for a half day exploration of Milford Sound, often called the 'eighth natural wonder of the world'. Sail out to the Tasman Sea, looking for wildlife along the way, for a visit to the Underwater Observatory and the opportunity to go sea kayaking in Harrison Cove.

We leave the majestic Fiordland National Park for the fertile sheep-dotted pastures of South Otago. Travel through Te Anau known for its beautiful lake and on to the country musical town of Gore at lunchtime, before arriving in Dunedin, New Zealand's southernmost city. Enjoy dinner tonight at Parcels Restaurant at your hotel.

This morning, join an exclusive tour of Larnach Castle. Your afternoon is at leisure. Perhaps ride the historic Tairei Gorge Railway or take a wildlife cruise of the Otago Pennisula.

Travel up the east coast of the South Island via Omarau and Timaru. Once back in Christchurch embark on a sightseeing tour of the city to learn about its rebirth after the devastating 2011 earthquake.

Travel along the rugged Pacific Ocean coast this morning to Kaikoura, where sperm whales can often be seen not far from shore. Pass the pink tinged crystallisation ponds of the Lake Grassmere Salt Works, then travel to pretty seaside fishing village of Picton. Later cross the Cook Strait to the North Island where you have a city sightseeing tour taking in New Zealand's parliament buildings, and a visit to Te Papa, the Museum of New Zealand. Tonight, enjoy dinner at your hotel.

Today see Wellington your way! You may wish to experience Weta Cave, home of the creative wizards behind The Lord of the Rings and The Hobbit trilogies. Go on a guided city walking tour around Wellington or a guided tour of Te Papa Museum of New Zealand. Your Journey Director can assist in booking your optional experience.

Travel through the dairy farming land of Manawatu to Napier in Hawkes Bay. This evening, enjoy dinner at your hotel.

Enjoy a relaxed start before we venture out to explore the region of Hawkes Bay. Relive the glamour and style of the jazz era with a luxurious vintage car tour. You'll be met your driver, in Art Deco costume, who will provide a fascinating commentary as you are driven in style, through Napier and surrounding areas. You'll learn about the earthquake that destroyed the city, hear stories of the people that led the rebuild, and discover the Art Deco style. This evening, enjoy wine tasting and dinner at one of their world-famous wineries.

Enjoy a leisurely start before continuing the journey to nearby Rotorua. Visit the spectacular Huka Falls, the only outlet of water from Lake Taupo, and then it's on to Rotorua. On arrival in Rotorua an orientation tour takes in views of Lake Rotorua. Later, you'll visit the Whakarewarewa Living Village for an insight into Maori life and how they interact with geothermal activity. Tonight, an evening of culture, history and scrumptious food awaits you at the Tamaki Family Marae. Wander through the ancient forest village and learn about Maori art forms and traditions, followed by a concert featuring local performers. Experience an authentic Maori Hangi meal, steamed underground in the traditional way.

Ascending to the breathtaking Redwoods Treewalk, enjoy an elevated bird's eye view of the 115-year-old redwood giants and view the beautiful surrounds of the forest from a unique perspective. Next stop is Rainbow Springs Nature Park. Discover native flora that grows around the crystal clear mineral water springs and you might even spot a kiwi or two!

Make your way to the famous Waitomo Caves for an exclusive 5-star Eco Glow Worm experience. Your guide sets the scene for a cave experience where you will see glow worms, cave formations and appreciate the beauty of Footwhistle Cave. Later, travel through the dairy farming district of Waikato, and onto Auckland. This evening, Toast your trip together tonight at a Celebration Dinner.

Say farewell to your fellow travellers as your Inspiring Journey comes to an end and we transfer you to Auckland Airport for your onward flight.

Prices are "from" per person based on twin/double share accommodation and for travel in low season. Seasonal surcharges and blackout dates may apply. Limited seat/spaces and all pricing is subject to change and availability. Rates for single travellers are available on request - please inquire. Itinerary effective 11 Oct ’16 - 1 Oct 17. Tours prior may follow a different itinerary.