Highlights of Britain : London to Edinburgh

Travel through the idyllic English and Scottish countryside visiting the iconic and historic cities of Oxford, Chester and York as well as enjoying the spectacular scenery of the Cotswold’s, Snowdonia National Park, the Yorkshire Dales, the Lake District and the Scottish Lowlands. 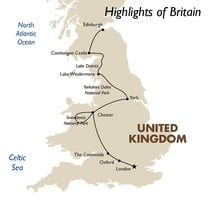 Depart from London and travel to Oxford, famous for its university and known as the “City of Dreaming Spires”. Enjoy a guided walking tour taking in some of the colleges here. Afterwards, continue to a traditional 18th Century woolen mill in the Cotswold’s after which drive through beautiful rolling countryside and quaint villages to your overnight stop in this region. Dinner tonight will be at the famous Pudding Club.

The next morning, leave for the city of Worcester with its 12th Century cathedral where you will find the tomb of King John. Arrive later at the idyllic village of Much Wenlock with its thatched roofed cottages and then at Ironbridge where the first bridge made of cast iron was manufactured. Continue to Chester for a 2 night stay.

The following day brings you to the rugged Snowdonia National Park with its outstanding natural beauty in the form of mountains, streams, cascading waterfalls and verdant valleys. Also visit Caernarfon Castle, an imposing 13th Century fortress situated on the waterfront.

Spend the next morning discovering the charms of Chester, one of the best preserved walled cities in Britain with its medieval centre and other parts dating back to the Roman era. Leave Chester later and cross over the wild backbone of England, the Pennine Hills to Haworth, a quaint town and home of the Brontes who were inspired to write novels such as Jane Eyre and Wuthering Heights here. Continue to York for 2 nights’ accommodation.

Your day in York gives you time to explore all the highlights of this old city including the city walls, the outstanding York Minster, the Castle Museum, the Jorvik Viking Centre with its reconstructions from the Viking era and the Shambles, the narrow thoroughfare of timbered houses and shops.

Depart from York and call in at Castle Howard, a large stately home and scene of many TV and movie programmes. After this, enjoy a scenic ride through the Yorkshire Dales to the Lake District in North West England and a 2 night stay on Lake Windermere.

A tour of the Lake District includes Beatrix Potter’s Hill Top Farm, some of the many picturesque villages to be found here and Dove Cottage, former home of the famed poet, William Wordsworth. Later, enjoy a short cruise on Lake Windermere.

Depart from the Lake District and travel through Cumbria to Hadrian’s Wall. Visit Birdoswald Roman fortress before crossing the border into Scotland where you will spend overnight in the Scottish Lowlands.

Your final day brings visits to Hermitage Castle, a sinister atmospheric eerie ruin, Abbotsford House, former home of Sir Walter Scott with its historic relics and Rosslyn Chapel before arriving in Edinburgh to complete your tour.

Hilton London Paddington is one of London's grandest Victorian hotels, and offers a full range of modern facilities in a fantastic location. The world's first palatial terminus hotel, this was the vision of Isambard Kingdom Brunel, a 19th century versatile, audacious engineer whose designs revolutionized public transport and modern engineering. With four London Underground lines at its doorstep - Circle, Hammersmith and City, District, and Bakerloo - this is one of London's best-connected hotels. With the capital, and the south and west of England conveniently accessible by rail and road, Hilton London Paddington is ideally positioned to connect those staying for business or leisure.

After meeting the group, we'll leave the capital behind us and set a course for the 'dreaming spires' of Oxford - where a walking tour awaits.

Then: it's off to the Cotswolds, where we'll spend some time exploring charming villages full of honey-coloured cottages. Tonight's dinner at the world-famous Pudding Club promises to be a memorable one!

There will be plenty of time to enjoy this morning at your leisure before we board the mini-coach and make tracks to Stratford-upon-Avon - the picturesque Tudor market town where William Shakespeare was born.

We'll discover more about the crusades of saints and kings on a tour of Worcester Cathedral before our road turns towards the rugged ancient landscapes of Wales this afternoon.

This evening, we'll dine together in Denbighshire.

Prepare for a soul-stirring sight this morning - the magnificent Snowdonia National Park (an Area of Outstanding Natural Beauty) is our next stop.

Tonight, we'll meet back at the hotel for a sumptuous gastropub dinner.

Today's itinerary has a distinctly musical theme. After breakfast, we'll leave Wales behind us and move on to Liverpool - the welcoming (and fiercely proud) city that gave birth to The Beatles. What better way to get into the 'Beatlemania' spirit than with a bus tour and visit to The Beatles Story museum? Toes still tapping, we'll round off the day in York.

We've a full day to spend getting to grips with York, starting with a walking tour of the Old Town. There's centuries of history to uncover along the medieval Shambles and Snickelways - and plenty of photo opportunities to be claimed!

Today, we'll rewind to the glory days of the English country estate with a tour of magnificent Castle Howard. Our path will then take us through Yorkshire Dales National Park, passing by rivers, tiny villages and centuries-old stone walls. The invigorating Lake District will be the spectacular conclusion to the day's journey.

Our first stop on the shores of Lake Windermere will be Beatrix Potter's Hill Top Farm - the place where she wrote many of her beloved children's stories. We'll then visit Hawkshead Grammar School, which was attended by none other than William Wordsworth, before dropping by his former home: Dove Cottage. This afternoon, there will be just enough time to take to the water on a lake cruise before we return to our accommodation for the evening.

Today, we'll visit Birdoswald Roman Fort in Cumbria before pressing on to the Scottish Borders. A traditional haggis dinner and bagpipe demonstration will provide us with a grand ending to our final night.

We'll make stops at the grand Abbotsford House and beautiful Rosslyn Chapel before reaching Edinburgh, where our tour will finish.

As the newest Principal hotel, it has undergone a multi-million restoration and refurbishment: all of our bedrooms and suites have been given a smart, new look, inspired by the golden age of travel and a genuine sense of Scottish hospitality. Guests familiar with PRINCIPAL will find familiar touch points, including the red bedside telephone, tuck box of treats and a vintage post box.

Our beautiful internal courtyard, The Garden - an oasis of calm with a glass roof - is now open from breakfast through to the wee hours. Inspired by the flavours of the Eastern Mediterranean, our new restaurant, BABA is brought to you by the team behind Glasgow's award-winning Ox and Finch restaurant.

Blue Roads Touring have hand-picked an extensive portfolio of quality properties across Europe and to ensure the very best experience on each of our tours, hotels may vary to those listed in this itinerary.

Mobility: All of our tours involve walking and require our guests to board and disembark our vehicles several times a day making this tour unsuitable for those with reduced mobility.