The New Zealand dollar is the official currency in New Zealand. Credit cards are accepted throughout the country, but ATMs are also common if you prefer to take out cash.

English is the official language of New Zealand, but some of the locals also speak Maori and Samoan as well. You won’t have communication troubles, no matter where you travel in the country.

New Zealand is truly a year-round destination. It has moderate weather patterns that allow you to enjoy outdoor activities at all times of year. Summer (December to March) is the most popular season, but spring and fall are great options, with fewer crowds and more affordable prices. The winter (June to September) offers many opportunities for skiing in the Southern Alps on the South Island.

The climate in New Zealand varies throughout the year, as it has four distinct seasons. In the summer, the temperature hovers between 20°C/68°F to 25°C/77°F, while in the winter, it dips to 12°C/53°F to 16°C/61°F. The far north of the North Island has subtropical weather in the summer months. Conversely, the mountains of the South Island have much cooler temperatures. Elsewhere, the temperature is usually milder, due to the proximity to the ocean, with some rain and abundant sunshine.

New Zealand is one of the most appealing nations on the planet, so it has something for everyone. In particular, it’s beloved by outdoor enthusiasts, as its long coastline, winding fjords, snow-capped peaks, and verdant plains offer a beautiful setting like no other. Travellers can also get in touch with a world-class food and wine culture, with some of the world’s best wines made in New Zealand’s agricultural regions. Cultural travellers can learn about the history of the Indigenous Maori, while travellers with the need for adrenaline kick can get their rush across the South Island, where they can bungee jump, kayak, jet-ski, and skydive. 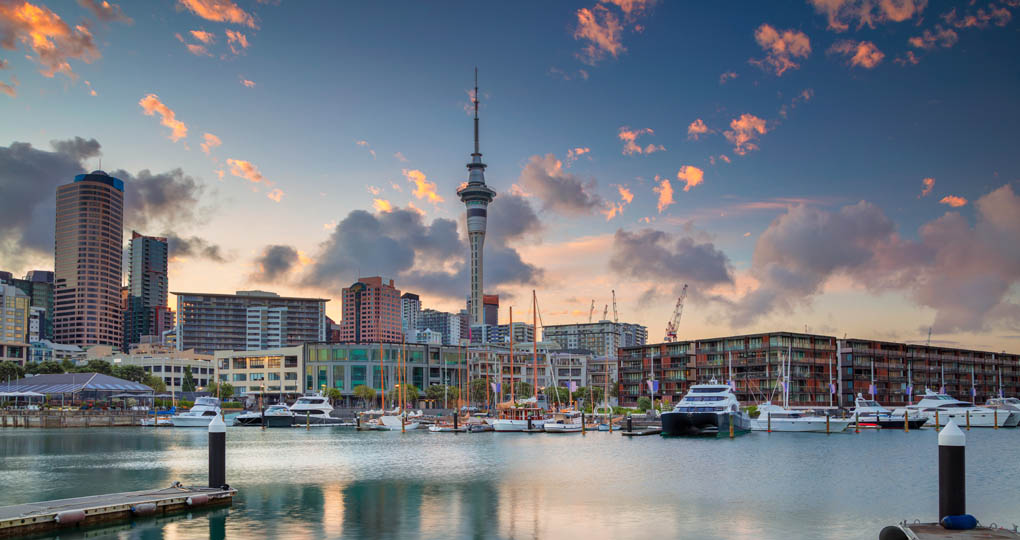 There are direct flights from San Francisco, Los Angeles, Chicago, Houston, and Honolulu to Auckland. There are also many connecting flights through Fiji, Tahiti, and the Cook Islands, which offer island stopover options.

Vancouver is the only Canadian city with a direct flight to New Zealand through Air New Zealand and seasonal options through Air Canada. There are also many connecting flights through American cities and Asian gateways, offering plenty of stopover options. 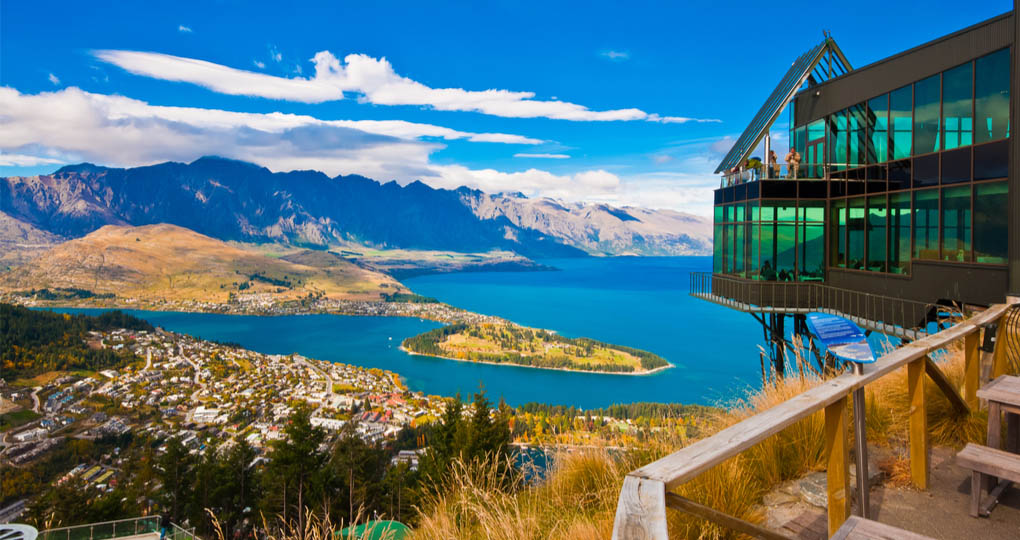 Known as the Adventure Capital of New Zealand, Queenstown sits on the shores of Lake Wakatipu and offers travellers the chance to unleash their inner adventurer. Travellers can jet-ski across the lake, bungee jump into canyons, and even skydive over the hillside. Those people looking for a more leisurely stay can visit nearby wineries or hike through the surrounding foothills. Queenstown is also the perfect base for a day trip to Milford Sound. In the winter, the city attracts skiers who want to take to the slopes of the Remarkables.

Known as the City of Sails, Auckland is beloved for its twin harbours, making it one of the most beautiful port cities on the planet. There are many popular attractions in Auckland, including the Sky Tower and the Auckland Domain, a city park that’s set inside a volcanic crater. It’s also easy to arrange a harbour cruise that enjoys views of the city from the water before taking in Waiheke Island or Rangitoto Island.

Rotorua combines nature and culture like few other places. The city itself is a tourist hub for the region, but it’s located on a geothermal hotspot, making it a great place to see mud pools, geysers, and hot springs. Te Puia is a great place to watch geysers erupt or mud pools boil. Rotorua is also one of New Zealand’s Maori centres. Te Puia has a Maori museum that explores the history of New Zealand’s Indigenous people, while Whakarewarewa offers a recreation of a living Maori village in the midst of the geothermal park. After a visit to the museum and the geysers, travellers can unwind in abundant hot springs.

Wellington is the capital of the nation that’s often referred to as the “coolest little capital in the world.” Despite its modest size, it’s a beautiful city surrounded by rolling hills and windswept coastline. Travellers can ride the famous red cable car up to the hill overlooking the city and enjoy views of the city and the surrounding water. Movie fans will want to visit Weta Workshop to see behind the scenes of The Lord of the Rings series.

Other Highlights of New Zealand Off the Beaten Path 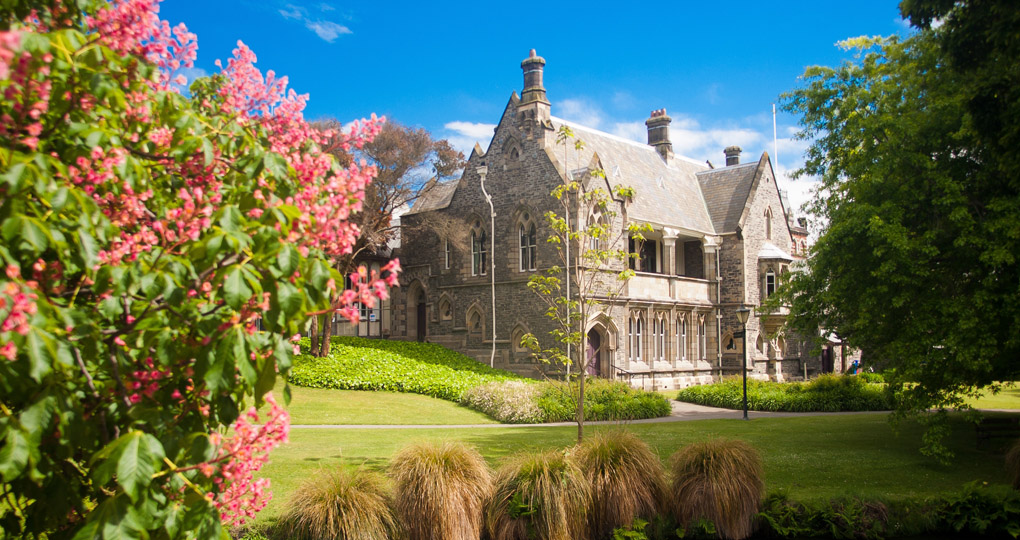 Christchurch is the most English city in New Zealand and the main urban centre on the South Island. The city itself continues to rebuild from the earthquakes of 2010 and 2011, but it remains one of the prettiest spots in the country, with the celebrated Botanic Gardens a particular attraction. It’s also a good jumping off point into the region of Canterbury, which is known for its pastoral fields and wineries.

These two glaciers on the South Island are unquestionably the most impressive in the nation. Located close to each other, the glaciers are accessed from the small towns that bear their respective names. Travellers can take a helicopter above the glaciers to see them from the air, or do a heli-hike where they’re deposited onto the glacier to explore on a guided experience (complete with crampons).

This national park located on the top of the South Island is renowned for its golden beaches, thick forests, and mountain ranges. It’s easily accessed from Richmond and Nelson, so it’s good for a nature day break or multi-day hiking and beach experiences.

This northern bay on the North Island is home to more than 140 subtropical islands that offer the ultimate beach escape far from the crowds. The region is known for its peaceful atmosphere and significant Maori landmarks, such as the Waitangi Treaty Grounds, where the treaty between the British and Maori was signed. Travellers can hike the crest of the bay, rent a boat to go big-game fishing, or relax on the undeveloped beaches, staying in a charming bed and breakfast in the evening. 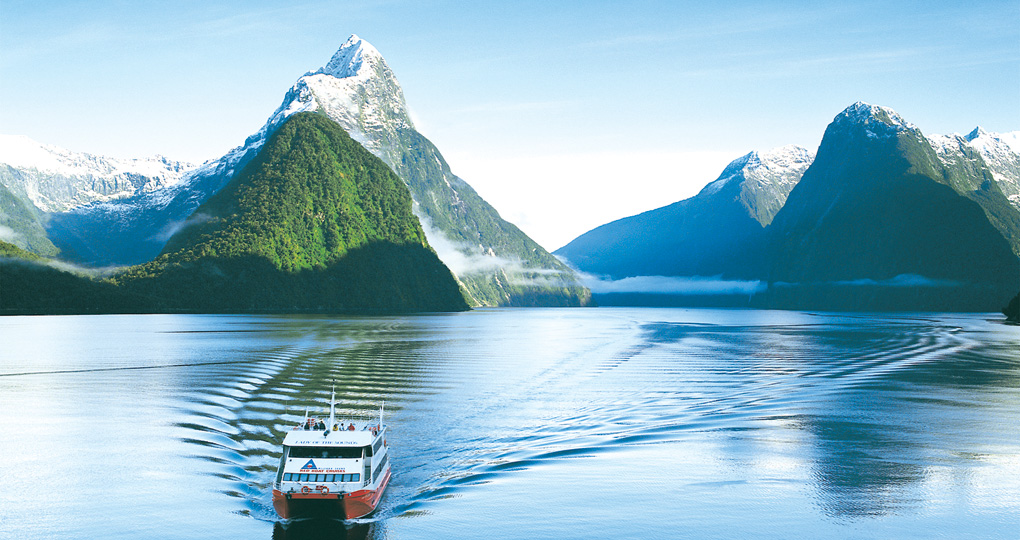 This fjord on the South Island is arguably New Zealand’s most beautiful location. The fjord culminates in Mitre Peak, a towering mountain that overlooks the water. It’s as picturesque as locations get. Near the fjord, there are rainforests and waterfalls to discover, as well as colonies of penguins, dolphins, and fur seals. A cruise is the best way to experience this natural landmark, but you can also hike along it for an equally enjoyable experience.

See behind the scenes of The Lord of the Rings at the Hobbiton Movie Set, which was constructed on a sheep farm in the Kaimai Ranges during the production of the films and remains to this day. You can visit Bag End, enjoy a pint at the Green Dragon Inn, and pause under the Party Tree to take in the enchanting atmosphere. It’s a must for any movie fan.

The Waitomo Caves on the North Island are home to an abundance of glow worms, who light up the underground cave system with their bioluminescence. You can ride a boat along the underground river, admire the stalactite and stalagmite formations, and gaze upon the glow worms which approximate the stars of the Night Sky.

Relax in the Polynesian Spa in Rotorua

The geothermal activity of Rotorua makes it a great place to soak in a hot spring. The Polynesian Spa recreates the hot spring traditions of the local Moari and offers various thermal pools to soak in while enjoying the views of the valley and Lake Rotorua. 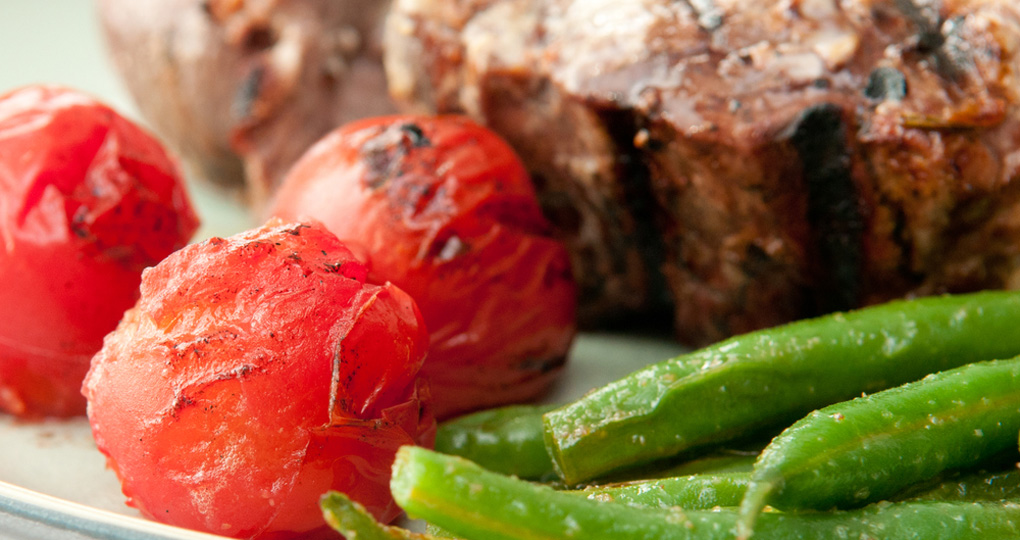 A hangi is a traditional Maori method of cooking food in an underground oven. Food is prepared, covered, and buried in the ground, steamed by the coals until perfectly done. Typical foods cooked this way are chicken, pork, and vegetables, as well as seafood. If you visit Rotorua, a hangi feast is a great way to engage with the country’s culinary traditions.

Due to the abundant coastlines, seafood is king in New Zealand. No matter where you are in the country, you’ll have your pick for delectable kinds of seafood, from oysters and mussels to freshwater crayfish or koura. Bluff Oysters are considered some of the best oysters in the world and green-lipped mussels are native to New Zealand.

Lamb is another cornerstone of the New Zealand diet. There are many more sheep than people in the country, so you’ll always find lamb chops, lamb steaks, racks of lamb, and lamb burgers offered on menus across the country. The lamb is arguably the best in the world, so you can’t go wrong no matter what you choose.

There are many wine regions across New Zealand in which you can try renowned vintages, such as Pinot Noir and Sauvignon Blanc. You can pair a visit to a winery with a stop by a dairy farm for the ultimate wine and cheese experience. 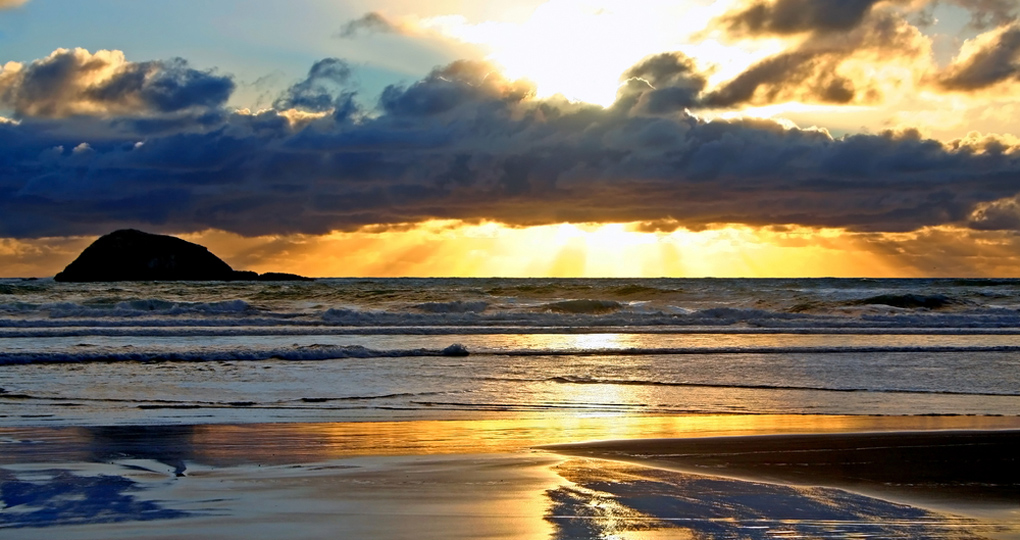 As a country with a renowned natural environment, New Zealand has taken many steps to protect its natural resources and infrastructure. Public transportation in cities such as Auckland are easy and convenient ways of getting around. Flights are available between the North and South Island, but travellers can opt for the three-hour ferry ride as well. There are farm-to-table dining experiences that offer the chance to support local economies and enjoy the fruit of the land. Local seafood is regulated according to sustainable fishing certifications, so you can rest easy ordering dishes across the nation. When you’re venturing into nature, be sure to stay on hiking trails, avoid disturbing local species, and take trash with you. Use reusable water bottles to avoid plastic waste and don’t take natural souvenirs with you, such as wildflowers and shells.

New Zealand is easy to combine with a trip to Australia or South Pacific islands such as the Cooks, Fiji, and Tahiti. You can also pair New Zealand with various gateway cities in Asia, such as Hong Kong, Taiwan, and Tokyo, making for many stopover options.

Most Popular Itineraries for New Zealand

FIRST-CLASS | TAILOR-MADE: This is the ultimate classic New Zealand tour. Begin in Auckland and then it’s on to Rotorua, next head South to the capital, Wellington before embarking on the scenic South Island with stops in Queenstown, the West Coast and Christchurch. Experience one of the most scenic rail journeys in the world as the TransAlpine takes you from Greymouth to Christchurch.

FIRST-CLASS | TAILOR-MADE: Travel from Auckland to Christchurch, visiting Rotorua, Queenstown and Milford Sound in between. Visit the rainforest and black sand beaches in Auckland, experience the Maori culture in Rotorua, cruise the magnificent Milford Sound with its rugged mountain peaks and cascading waterfalls, pass through the beautiful landscape of Otago before arriving in Christchurch.

Best of Both Islands Self Drive

FIRST-CLASS | SELF-DRIVE: An excellent way to acquaint yourself with both islands, this self-drive program brings you to must-see destinations throughout New Zealand including Rotorua and the rugged Glacier region while also setting aside ample free time to simply unwind.