I’m not sure you’re aware of this, but New Zealand is a pretty gorgeous country. Shocking information, I know, but it’s true. This being the case, it should be obvious why this South Pacific nation is a popular filming location for Hollywood movies. You can explore these movie locations on New Zealand tours.

From the moment Peter Jackson arrived on the world stage with The Lord of the Rings: The Fellowship of the Ring in 2001 and viewers saw the gorgeous landscapes featured in the movie, the world breathed a collective sigh of astonishment. Everyone thought, "What a gorgeous world! I wish I could visit it." Well, soon enough, people found out that you could travel to this fantastical world as it was actually New Zealand, one of the most geographically-diverse and beautiful countries on the planet.

After The Lord of the Rings, other filmmakers flocked to New Zealand to capture its beauty on screen and delight audiences with its natural marvels. You can easily explore the world you’ve seen on the silver screen when you enjoy New Zealand tours that take in these highlights. It’s another reason on a long list of reasons to head to this beautiful country.

See the Home of Middle Earth

You have to start with The Lord of the Rings. Although the idea of celebrating New Zealand as our very own Middle Earth is old hat at this point, there’s no avoiding the fact that The Lord of the Rings and The Hobbit movies remain the most famous films to ever shoot in New Zealand. No matter where you go on the island, you’ll come across locations from this film series.

Chief among these locations is the Hobbiton film set near Matamata, southwest of Rotorua. First constructed in 1999 during the making of The Lord of the Rings trilogy, this erstwhile farming village became a haven for tourists after the franchise became a hit. You can visit the village of Hobbiton on various New Zealand tours - although be sure to book in advance as the tour is popular. The typical tour includes a visit to Bilbo and Frodo Baggins’ home, Bag End, the Party Tree seen during Bilbo’s birthday at the beginning of The Fellowship of the Ring, and the Green Dragon Inn, the local watering hole in the film franchise. 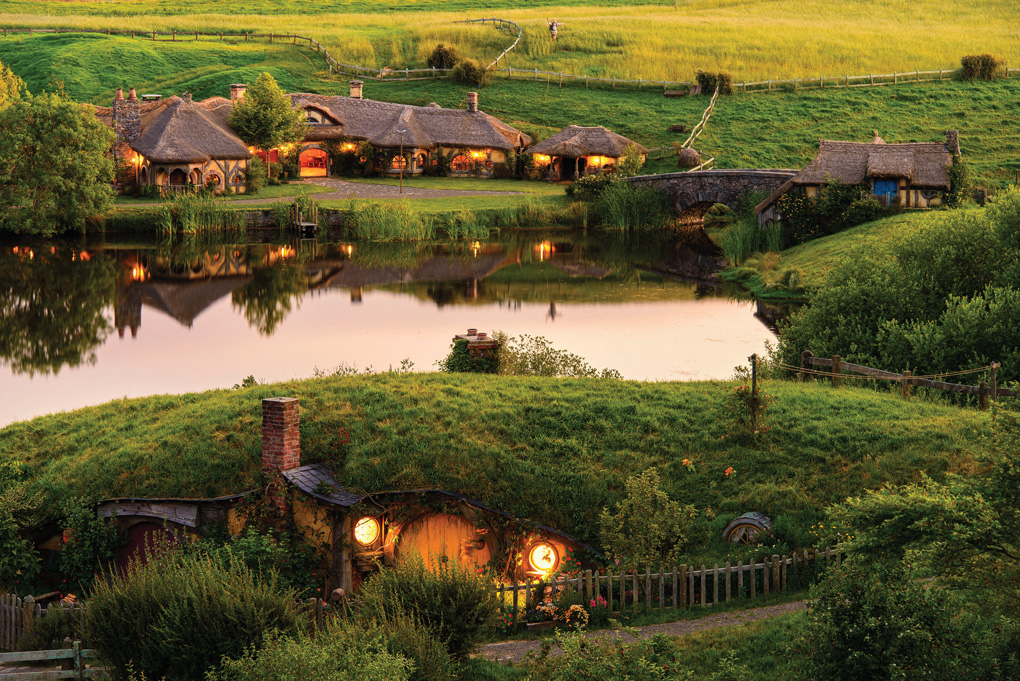 Even if you’re not so diehard as to schedule a trip to the Hobbiton set, there are still other The Lord of the Rings shooting locations in New Zealand that you should explore. To the south of Matamata, just below Lake Taupo, you’ll find Mount Ngauruhoe, a stark, ashen hill depicted as Mount Doom in The Return of the King. The dark lava landscape of this stratovolcano is a fascinating sight. On the South Island, you can also see spots like Mount Sunday, a golden hillside in the Canterbury region that served as the location of Edoras, the capital of Rohan, and Skippers Canyon, a picturesque forested canyon and river used to shoot the scene in The Fellowship of the Ring where Arwen saves Frodo from the Ringwraiths.

The Capital of New Zealand and the Film Industry

The capital of New Zealand, Wellington, is the centre of the country’s film industry. Thus, locals affectionately dub it "Wellywood." A large part of what makes Wellington so important is that it’s home to Weta Workshop, a visual effects and props company founded by Peter Jackson back when he was making horror movies.

Apart from making their name on The Lord of the Rings, Weta Workshop has also been responsible for the effects work in Avatar and the new Planet of the Apes films. You can tour Weta Workshop to learn about the process behind computer-generated visual effects and see how movie props are made. If you’ve ever wondered how digital artists are able to make films so fantastical and yet still realistic, this is the tour for you. 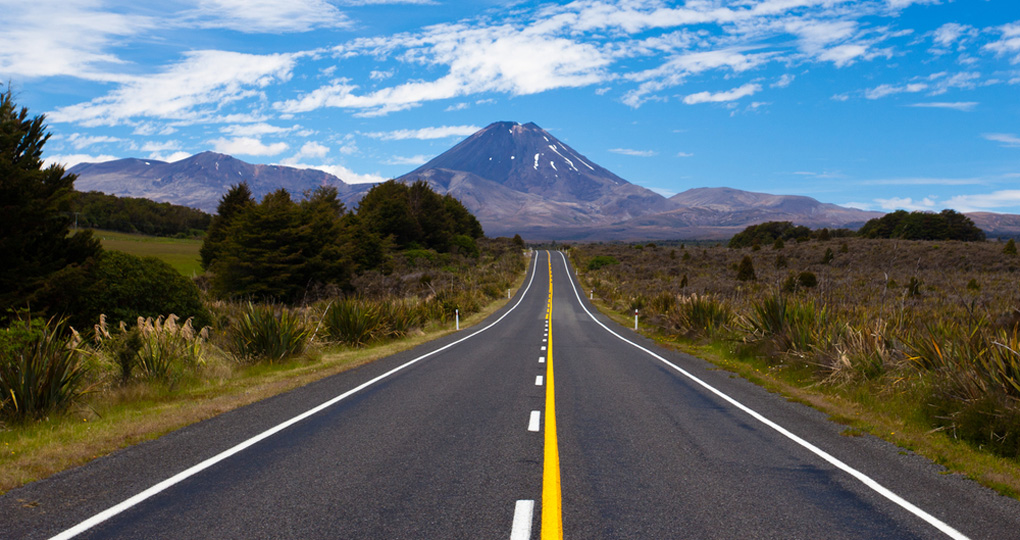 Wellington is also home to studios where more recent blockbusters like Ghost in the Shell have filmed. As well, the city itself has been transformed to stand-in for various cities around the world, such as 1930s New York in the 2005 remake of King Kong.

The Picturesque Beaches of Auckland

Although it doesn’t drive the film industry in New Zealand like Wellington, Auckland has seen its fair share of big movies film within or near its city limits.

For instance, the 1993 period drama, The Piano, shot many of its key scenes on KareKare Beach and Piha Beach, not far from the city. The film was the first New Zealand film to win the Palme d’Or at the Cannes Film Festival and director, Jane Campion, became only the second woman to ever be nominated for Best Director at the Academy Awards. You can easily visit either of these beaches on New Zealand tours. KareKare is located around 50 minutes to the west of Auckland, while Piha Beach is another 10 minutes north. Both beaches contain stark black sand and are some of the most popular surfing spots in the whole country.

The Piano isn’t the only Kiwi film to shoot around Auckland. In fact, it seems that the North Island’s capital is the place to shoot homegrown films. Two of the best independent films of recent years hail from director, Taika Waititi, a New Zealander of Maori descent who directed the upcoming Marvel superhero film, Thor: Ragnarok. Both of his independent features, Boy and Hunt for the Wilderpeople, shot in and around Auckland. These films take advantage of Waihau Bay and the Waitakere Ranges, both gorgeous locations to the west of Auckland. If you’re wanting to experience some lovely wilderness close to a city centre, you should put Waihau Bay and the Waitakere Ranges on your itinerary.

There’s also Muriwai Beach just to the north along the coast, which has also been used for big Hollywood films. It was the main location in the 2013 remake of the horror classic, Evil Dead, and the related TV show, Ash vs. Evil Dead. Don’t worry, the gorgeous forests and beaches don’t look so scary in daylight. In fact, they’re downright stunning. 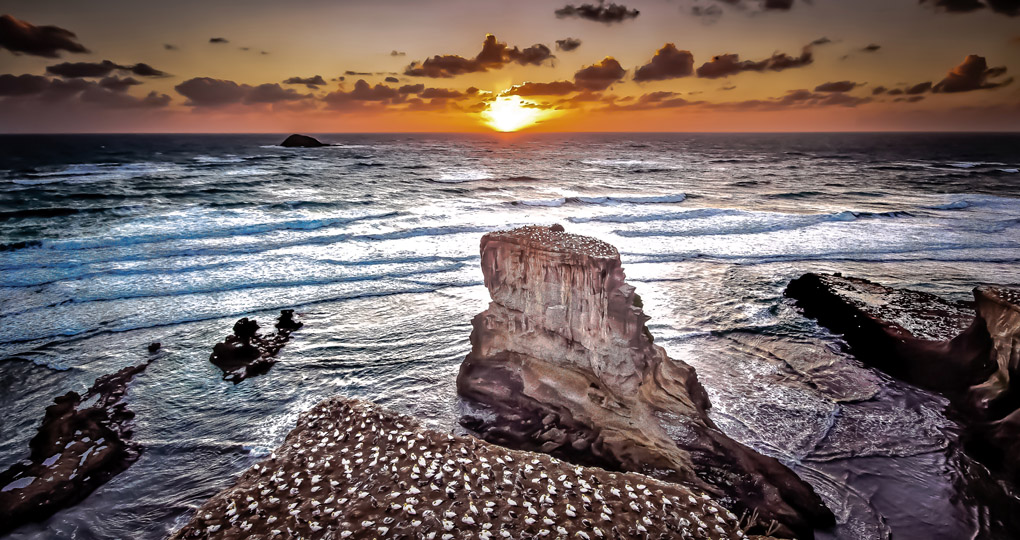 Movie productions don’t only stick to Auckland and Wellington for location shooting on the North Island. New Zealand tours allow you to visit some of the natural, beautiful sites used for shoots.

On the Coromandel Peninsula, in the island’s northeast, you’ll find the beach landmark of Whanganui-A-Hei or Cathedral Cove. This lovely rock arch was used in the film, The Chronicles of Narnia: Prince Caspian, to depict the location where the Pevensie children return to Narnia. It’s a lovely location regardless of whether you’ve seen the movie or not, and well worth a visit if you happen to be in the area. 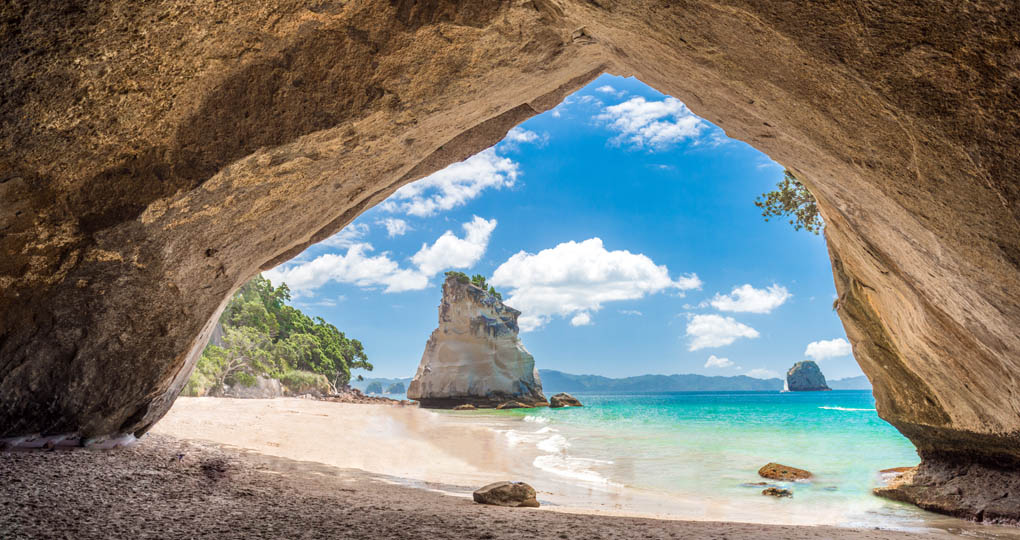 On the diagonal opposite side of the island is Mount Taranaki, which was a central backdrop in the Tom Cruise film, The Last Samurai. With its resemblance to Mount Fuji in Japan, it’s not hard to see why the producers decided it was the ideal spot to recreate Japan in New Zealand. Another hill, Mount Victoria, located in the municipal area of Wellington, shows up in many films. It served as a filming location in early scenes of The Fellowship of the Ring and more recently was a major location in Disney’s Pete’s Dragon. Pete’s Dragon also filmed in the Bay of Plenty and Rotorua, taking advantage of the redwood forests that look like they’d belong in northern California.

The South Island’s Natural Splendour is a Perfect Backdrop

Don’t assume the North Island gets all the attention when it comes to Hollywood productions. The South Island, with its impressive natural beauty, is equally attractive to filmmakers wanting some natural splendour to make their movie pop.

Flock Hill lies around 90 minutes west of Christchurch and served as the location for the final battle in The Chronicles of Narnia: The Lion, the Witch, and the Wardrobe. The area is most notable for the limestone rocks scattered across the hillsides. Take a walk through the rocks and make your way to Cave Stream, a water-filled tunnel with incredible views. The Elephant Rocks further south were also used in the movie to depict the camp of the lion, Aslan.

A bit further south you’ll find Aoraki or Mount Cook, the highest mountain in the country. It was the main location of filming for the rock climbing drama, Vertical Limit, back in 2000. While the movie might be forgettable, the mountain certainly isn’t. At 3,764 metres, it’s a formidable peak. If you have any interest in rock climbing while on New Zealand tours, this is the place to test your skills. Just don’t do so idly. Aoraki is not an easily climb.

Milford Sound and its incredible Mitre Peak continue to be New Zealand’s most-photographed landmark. The area around Milford Sound also provided some lush environments for the recent science-fiction horror movie, Alien: Covenant. Director, Ridley Scott, transformed the beautiful landscape into an otherworldly beachfront, infusing its tranquility with some alien horror.

On the southern tip of the South Island is the lovely stretch of Oreti Beach. The long stretches of coastline served as a location in The World’s Fastest Indian, the 2005 biopic starring Anthony Hopkins as Burt Munro, the motorcyclist who broke the land speed record. Even if you have no interest in motorcycles, the beach is a gorgeous spot for photographs or to head on a long stroll. 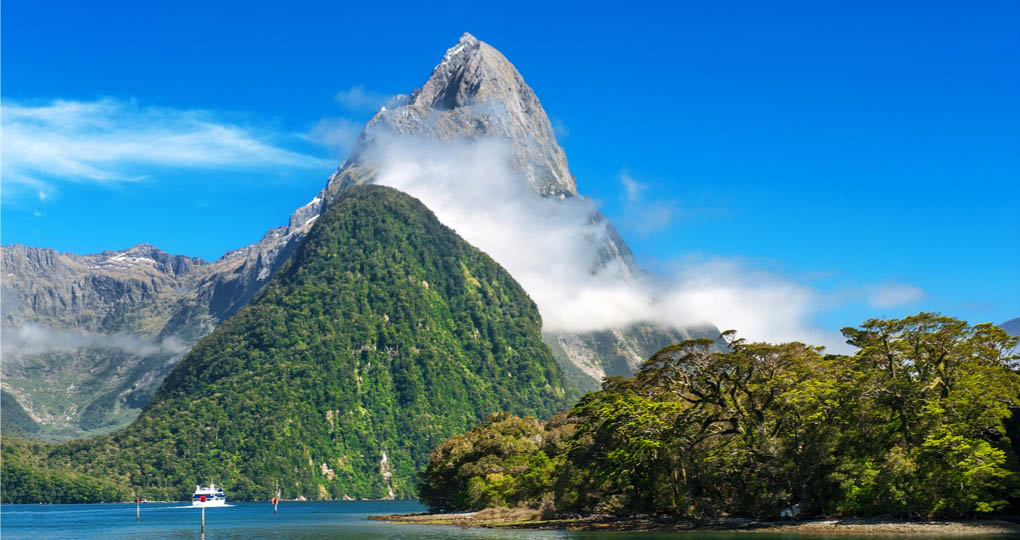 New Zealand’s incredible landscape continues to astound Globetrotters heading to the country and those people who only get to engage with it up on the movie screen. But why settle for the movie version when you can experience these locations for yourself on New Zealand tours? Movies are wonderful, yes, but experiencing a magical landscape in the real world is even better.

MODERATE | TAILOR-MADE: Spend three days exploring Auckland, known as the “City of Sails” because of the many yachts in the harbour. See the sights and scenery that have made this city a favourite with tourists.

FIRST-CLASS | SELF-DRIVE: Drive from Auckland to Wellington discovering the many highlights that the North Island has to offer. Stop in Coromandel Peninsula and Rotorua then visit Lake Taupo and Napier along the way.