Have a “Devilish” Good Time with the Outsiders of the Tasman Peninsula, on Your Australia Vacation

When European explorers first heard the chilling screams and snarls of the Tasmanian Devil in the island’s forests at night, they first thought such sounds could only come from some supernatural evil, lurking in the dark. When they finally caught sight of the culprits, the jet black fur, red ears, sharp claws, and vampire-esque fangs, it probably didn’t do much to dispel the myth! And so the name sticks today – Tasmanian Devil.

Yet, seeing Tasmania’s most famous native animal in daylight, sitting there silently, a streak of white across its chest, little claws hooked around a log and a somewhat dejected expression in its eyes, you have to wonder how a creature’s public image could go so horribly wrong. Tasmania’s most instantly recognizable beast seems adorable. Almost cuddly.

Then comes feeding time and… okay, thanks. We’ll pass on those cuddles.

Notoriously vicious, yet impossibly cute, there’s no denying Tasmania’s signature critter has an image problem. Blame Warner Brothers, or the fact that outside of Tasmania, they’re confined to wildlife parks, where they spend most of the day lazing in the shade of logs and other shelters, often out of visitors’ sight. That leaves the mostly unseen devils represented by their reputation for being bad tempered scavengers whose days are divided between eating and fighting.

Come to Tasmania and you’ll see some less visitor-shy devils, ready to offer a more objective view (or at least a cuter one).

Despite their status as the world’s largest carnivorous marsupial, the Tasmanian Devil has never really been an “apex” predator, nor one of evolution’s great success stories. Once found throughout Australia, the mainland devils were eradicated when the Aboriginal people introduced dingoes as hunting dogs. Since Australia’s new (and reigning) top dog never reached Tasmania, the remaining devils staked their claim, and have been the island state’s unofficial mascot ever since.

In recent years however, the native devil population in Tasmania has faced a new threat, making protected areas and wildlife reserves more crucial to their survival than ever. An easily spread and lethal facial tumour disease has decimated the Tasmanian Devil population throughout the island, creating pressure to isolate and protect healthy devil colonies and regions. One such region is the Tasman Peninsula, a handy hour’s drive from Hobart, and one of the city’s most popular day trips.

The Tasman Peninsula’s main attraction is Port Arthur, one of the oldest and most notorious historic penal settlements in Australia. Port Arthur was usually the fate of convicts deemed the worst of the worst, unable to contribute to the growth of increasingly well-heeled Sydney Town. In addition to Port Arthur’s harsher conditions, the Tasman Peninsula offered a natural barrier to escape in that it was completely surrounded by water, except for the small isthmus known as Eaglehawk Neck.

That same isolating geography has become the local Tasmanian Devil population’s best shield against disease. Along with a colony in Tasmania’s remote northwest, the Tasman Peninsula’s devils are the island’s best hope for eradicating facial tumour disease and sustaining a healthy population of these animals into the future. 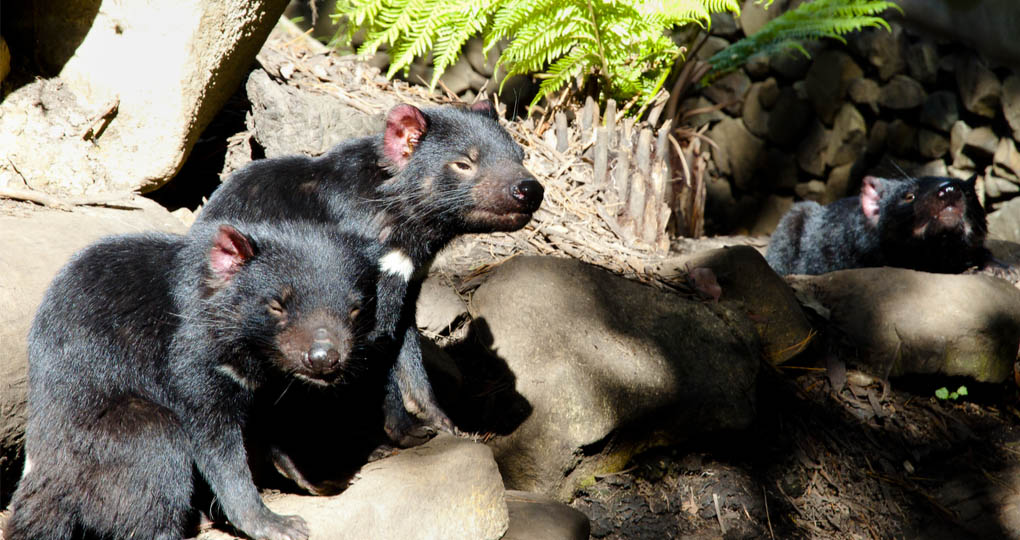 One unique wildlife park located just a short drive from Eaglehawk Neck is Tasmanian Devil Unzoo. With an innovative design that immerses visitors in the animal’s habitat rather than trying to contain them in enclosures, the infamous Tassie Devil is the star. That doesn’t mean visitors wander free with the devils, whose bite (relative to size) packs the strongest force of any carnivorous mammal on Earth. Rather, they can pop their heads up from the underground “devil den,” perhaps coming nose to nose with the beasts (safely separated by glass), embodying a philosophy of “who’s watching who?”

While Tasmanian Devils in mainland wildlife sanctuaries tend to sleep the day away, in Tasmania, they know that daytime is feeding time, and so are much more visible. A devil feeding is one of the more thrilling things you can witness in Tasmania on your Australia vacation. Even watching just one devil wrestle in a tug of war (remember that powerful bite) for its lunch gives you new appreciation for the tenacity of these animals, who will happily devour either fresh meat or carrion, bones, fur and all.

As you leave Tasmanian Devil Unzoo behind and approach Port Arthur, it’s possible to draw certain parallels between that hardscrabble existence (not to mention the image problem) and the lives of the men imprisoned here. As in many applications of justice through history, public perception and social influence played as much a part in who was sentenced to Port Arthur as the severity of the crime. The men – and sometimes boys, imprisoned and schooled on a nearby island – who wound up here were usually not expected to return to the mainland, let alone England, even if they survived their sentence. That sentence typically involved floggings, savage guard dogs, work on chain gangs that could lead to serious injury or worse – accidents during Port Arthur’s short-lived stint as a mill claimed the lives of several convicts – and solitary confinement, even in the prison chapel. Each man was confined to his own booth during the service, meaning he could see only the minister, never his fellow inmates. 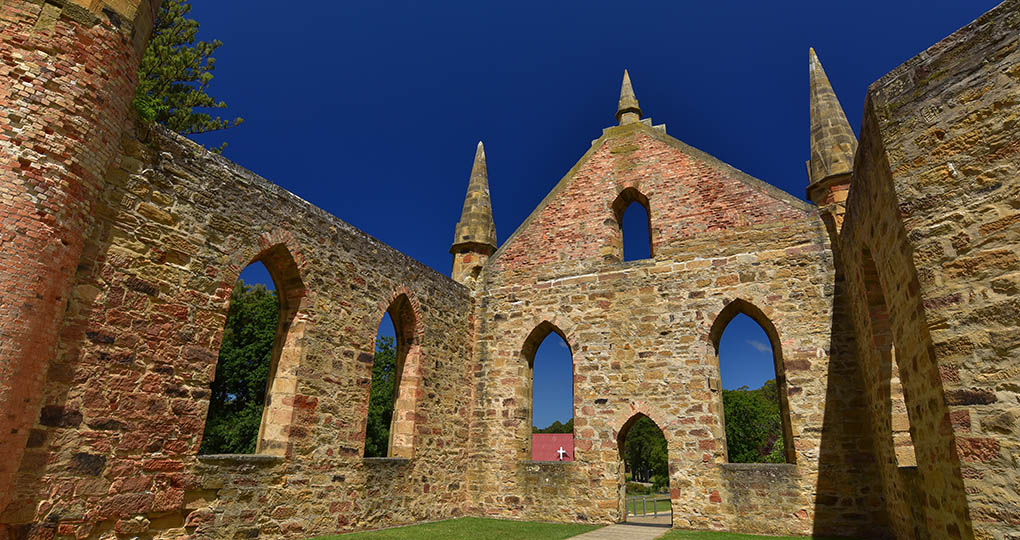 Evidence of these hardships is still visible at the Port Arthur Historic Site. Fronted by a sleek modern visitor’s centre and museum, the ruins of the former colony offer up the stories of convicts, guards, and the few free settlers who made Port Arthur home. They range from heartwarming to haunting – quite literally if you care to stick around after dark for one of Australia’s most atmospheric ghost tours. A cruise around Carnarvon Bay, circling the Isle of the Dead, which contained the colony’s cemetery, completes the experience while showing off the natural beauty of the area. 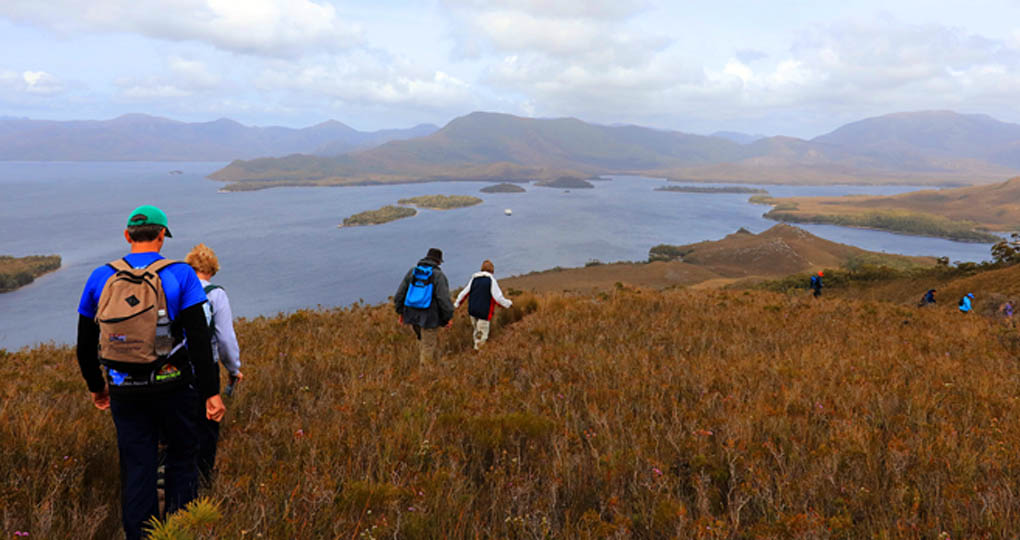 If you’re particularly interested in the history of Port Arthur and its “residents,” you’ll want an entire day to explore, rather than trying to squeeze a visit into a few hours in between touring elsewhere on the Tasman Peninsula. Those with a casual interest will probably be satisfied with a short introductory tour, a cruise on the bay, and a couple of hours to explore on their own. But if you’re wanting to explore the entire site, visit the Isle of the Dead, the children’s island, or explore the onsite museum in any depth, you’ll probably want to stay longer. Those taking a ghost tour on their Australia vacation will obviously need to linger after dark.

Whether you’ve come for the history, the snarling, adorable wildlife, or to try and squeeze in both, a day on the Tasman Peninsula should absolutely be on your list if you’re coming to Hobart.

Just try to resist the urge to pet the Tasmanian Devils. Seriously. Buy a stuffed toy one instead. Some of them even growl and snarl.

Experience Tasmania’s wilderness and wildlife first hand as you explore Mount Field National Park, the oldest park in Tasmania. As you tour the park, you’ll pass through rainforest and alongside waterfalls, and spot Tasmanian Devils, wombats, wallabies, quolls, and all manner of incredible marsupials at Bonorong Wildlife Sanctuary.

This six day walk is a journey within Tasmania’s World Heritage Area that features a huge diversity of flora and fauna. Spend nights in a private hut nestled away in this remarkable park.

Embark on a cruise from Australia’s largest city to the southern island of Tasmania. Visit the icons of Sydney, like the Harbour Bridge and Opera House, before heading south aboard the Norwegian Jewel to take in Burnie, the "City of Makers," and the ascending café culture of Hobart.