An Africa Vacation Inspired by The Lion King

Whether you first saw the original version back in 1994, are a fan of the new photorealistic computer-animated remake, or were stunned by the immensely-popular Broadway show, odds are that if you’ve seen a version of The Lion King, you’ve wanted to go to Africa. And of course you do!

With its stunning designs, lively songs, and heart-tugging story about a lion reclaiming his throne, The Lion King is not only a great film, but a great showcase for the African landscape and animals that are as beguiling in 2020 as they were in 1994. So in order to accommodate your inevitable desire to see Africa after watching the film, we’ve highlighted some of the spots to visit in order to enjoy an Africa vacation inspired by The Lion King.

Where can you see the sights from The Lion King in Kenya?

Before work began on The Lion King, the animators visited Hell’s Gate National Park in Kenya to gain inspiration for the designs in the movie. For instance, the criss-crossing valleys during the wildebeest stampede scene come directly from some of the valleys in the park. As well, they apparently came up with the design for Pride Rock after seeing some of the rock formations in Hell’s Gate.

Located to the northwest of Nairobi, Hell’s Gate is one of the smallest parks in the country, making it relatively free of tourists. But it’s also a great spot to explore since you can venture through most of the park on foot or by bicycle. The one big thing lacking in Hell’s Gate is the absence of lions, which is a bit odd considering the park inspired a movie called The Lion King. However, that lack of predators means an abundance of herbivores such as giraffes, zebras, antelopes, and even warthogs (get ready to meet Pumbaa!). You can hike or bike through the park to see the animals, as well as the abundance of geysers and hot springs in the park. 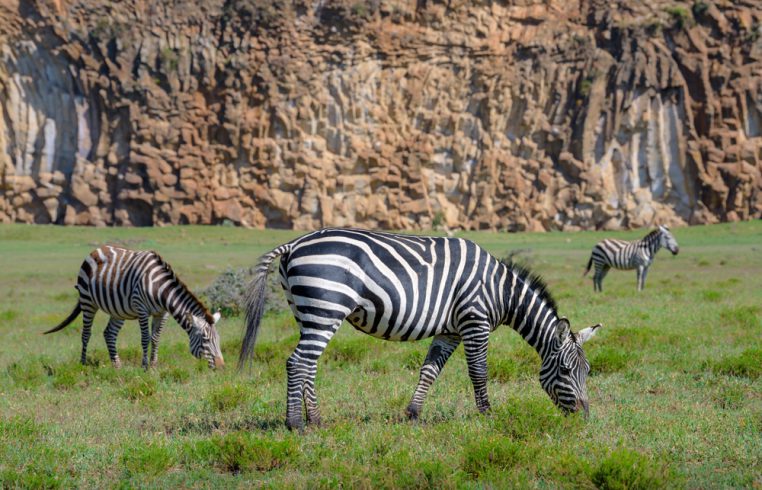 As for finding the real life Pride Rock, there’s no one rock that fits the bill. Instead, animators were inspired by a few rocks in the park. Fischer’s Tower is the most notable of the park’s rock formations. Sitting in the northeastern corner of the park, Fischer’s Tower rises 22m above the ground and is arguably its most iconic sight. It doesn’t much resemble Pride Rock, but it’s stunning nevertheless. While Hell’s Gate isn’t listed in any Goway packages, it is available on request as an extension from Nairobi during your Africa vacation in Kenya.

Masai Mara is the most popular park in Kenya and home to the Kenyan half of the Great Migration. Since you can’t see lions in Hell’s Gate, you ought to head into Masai Mara to see the lions or simba (“simba” is lion in Swahili) that you missed out on earlier. In addition to being able to see lions in Masai Mara, you’ll also get to see all manner of animals featured in the film, from warthogs (Pumbaa) to hornbills (Zazu) and hyenas (Shenzi, Banzai, and Ed). As mentioned, Masai Mara is also home to the Great Migration of wildebeest and zebras that see over a million animals migrate between Tanzania and Kenya each year.

Head to Masai Mara around August and September to see the herds enter the park during the Great Migration. You can also visit Masai Mara year-round as part of an Elewana Sky Safari or a Kenya Odyssey with Goway. The Elewana Sky Safari takes travellers on an 8-day trip from Amboseli National Park to Meru National Park before reaching Masai Mara. The Kenya Odyssey visits Mt. Kenya and Lake Nakuru in addition to Masai Mara on an 8-day itinerary.

A Kenyan safari is also a great option for a family vacation. Kids get to see Simba and live out their fantasies of The Lion King in real life, while parents get to enjoy an unforgettable safari. Goway has several family vacations across Africa to consider.

Samburu is another great place to see some sights on an Africa vacation as they appear in The Lion King. Co-director Roger Allers explicitly mentioned that Samburu was used as a general reference point when animating the film, so you may find yourself stumbling across landscapes that look suspiciously familiar to the Pride Lands. Located to the north of Nairobi, Samburu has a semi-arid landscape that attracts some of the most unique animals in Kenya, including gerenuks, Grevy’s zebra, and oryx. Samburu was also home to a lioness that made news headlines when she adopted several orphan antelopes and oryx. Although this particular lioness hasn’t been seen in over 10 years, odds are you’ll spot other lions in the area.

Are there any spots from The Lion King in Tanzania?

The Serengeti is the most famous park in Tanzania, and possibly the entire world. It’s certainly synonymous with the golden savannah, migrating herds, and mighty giant cats that define the African wilderness for so many people. So if you want to see the incredible display of wildlife as seen in the opening moments of “Circle of Life” in The Lion King, the Serengeti is the place to go.

Located along the northern border with Kenya, the Serengeti is home to the southern portion of the Great Migration and the ultimate place to see an overwhelming demonstration of wildebeest like in the movie (without, you know, the stampede and all that). A Migration Safari with Goway takes you to the Serengeti in addition to Ngorongoro Crater, which is the world’s largest, inactive volcanic caldera and home to a startling number of animals in a relatively small area.

FIRST-CLASS | SMALL GROUP: Witnessing Tanzania's great migration is a once in a lifetime experience. A natural phenomenon where over a million wildebeests and hundreds of thousands of zebras and gazelles migrate north annually.

What other regions should you visit to see things from The Lion King?

Although The Lion King is not explicitly set in any one country, it’s obviously fashioned after East Africa and Kenya in particular. But that doesn’t mean that you should restrict your sights to Kenya when heading on an African safari. Even if you’re looking to recreate specific experiences from The Lion King, other countries will help you see what you’re looking for.

For example, the Kalahari Desert that stretches across Southern Africa between parts of Botswana, Namibia, and South Africa is home to meerkats. These small mammals live in communal burrows and are among the most adorable animals to see on safari. You’ll find the real-life Timon in several parks camping out on raised land to get a good view of the surrounding landscape. They sometimes even climb on each other’s heads for better views. Even if you get near them, odds are they won’t spook, as they’re fairly used to the presence of humans. You’ll also find some hyenas and black-maned Kalahari lions (which look kind of like Scar) in Southern Africa. So look beyond East Africa when trying to recreate The Lion King in real life. 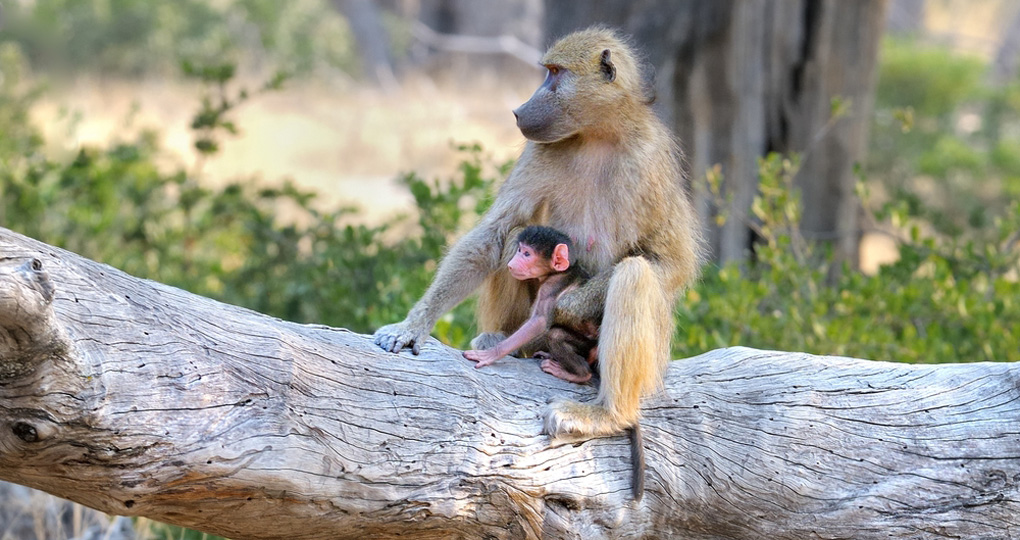 Of the major animals of The Lion King, the only one you cannot see in East or Southern Africa is Rafiki, the wise mandrill that serves as mentor and shaman for Simba. While formerly classified as baboons, mandrills are actually their own species of primate that lives in the dense rainforests of Central Africa. In particular, they live in Cameroon, Gabon, Equatorial Guinea, and the Congo, which is bad news for travellers, as these countries are much more difficult and dangerous to travel to. So unless you’re seeing a mandrill in a zoo, it’s unlikely you’ll spot one in real life.

However, you can instead focus on other primates during your time in Central Africa. While there are no mountain gorillas in The Lion King, that shouldn’t stop you from heading to Rwanda or Uganda to go on a gorilla trek into the forest to spot these mighty apes. Once you come face to face with a mountain gorilla in the mountainous rainforests of Bwindi Impenetrable Forest or Volcanoes National Park, you’ll be glad you veered off the movie itinerary and sought out some of the other incredible animals that live on the continent.

Since The Lion King is an animated film, you don’t have the luxury of visiting its real-life filmmaking locations, but you can still use the film as inspiration for an Africa vacation, to seek out the magnificent animals that it highlights. Whether you’re heading on game drives across the Masai Mara and Serengeti, gazing upon Fischer’s Tower in Hell’s Gate, or spotting meerkats in the Kalahari Desert, you’ll experience some of the marvels of the African wild and feel like you’ve entered a world as wondrous as anything found in the Pride Lands.

FIRST-CLASS | SMALL GROUP: Kenya is often described as the African continent in microcosm. You will see some of the best parks in Africa from Lake Nakuru to Masai Mara, home of the “Big Five” and the Masai people.

MODERATE | ESCORTED COACH: Spend two weeks discovering all that makes South Africa one of the world’s most diverse and colourful destinations. Take in natural sights such as Blyde River Canyon, explore the historic lands of the Zulus and Swazis, follow the magnificent South African coastline, and immerse yourself in the beauty, wine, and culture of the Cape. On this tour, a maximum of 40 guests are escorted by a local professional tourist guide. All departures are guaranteed with a minimum of 2 guests. Transportation is in air-conditioned luxury vehicles and tours are only conducted in English.

An African safari touches something deep within all of us, for it is an experience that will never be forgotten. Explore some of the finest national parks and game reserves in Kenya and Tanzania, with expert guides on hand to help bring to fruition the Africa safari you’ve always dreamed of. At a moderate price point, this small-group trip is great for solo travellers too.