Things to do in Chile

Every country has its outstanding and special attractions. Goway has selected its Top 12 Things to do in Chile (not in any particular order) for you to enjoy on your visit to this destination. 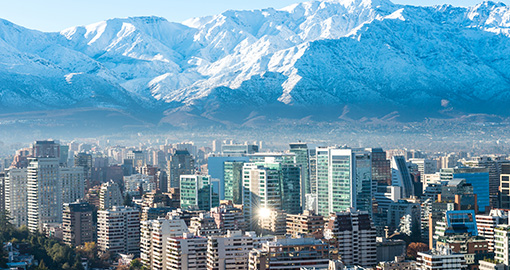 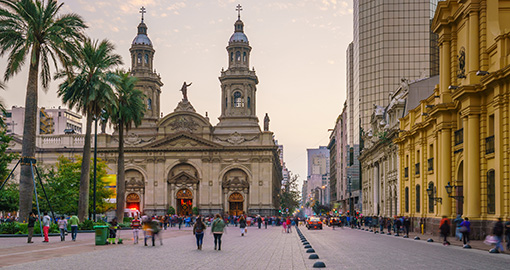 The Plaza de Armas is the main square in Santiago. Surrounding the square are historic buildings such as the Metropolitan Cathedral of Santiago, the eye-catching Central Post Office Building, the Palacio de la Real Audiencia de Santiago (Royal Palace) and the building that serves as the seat of local government for Santiago. Most of these buildings were constructed in the 19th Century. Also around the square, you will find malls which sell artisanal merchandise and also cafes. The Chess Club of Santiago meets at the outdoor stage every weekend. All you have to do, on a Chile vacation, is walk up and ask for a game and you can play against Chile’s finest chess players. 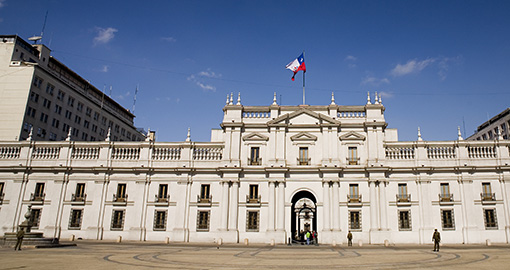 La Moneda Palace is the seat of the President of the Republic of Chile. It also houses the offices of three cabinet ministers. It is very large and occupies an entire block in the area known as Civic District. It was originally a colonial Plantation house was designed by Italian architect Joaquín Toesca and was opened in 1805. It is the only structure in the pure Italian neoclassical style that exists in Latin America. A traditional changing of the guard ceremony takes place every two days. A formal ceremony dating back to the 1850’s, it lasts about 30 minutes and includes a band playing, troops with horses parading into the square, and much pomp and circumstance. Free guided tours of the palace are available online. They must be requested at least seven days in advance. 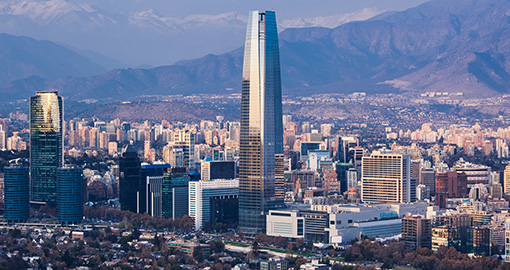 The Costanera Centre is a business and commercial complex skyscraper consisting of 4 towers. The complex includes a six-floor shopping mall, two high-end hotels and an office building. The Gran Torre Santiago Tower 300 metres/980 feet tall and is the tallest building in Latin America and the second tallest in the Southern Hemisphere. You can take an elevator up to the viewpoint of this building and n walk around the observation deck where you can see a 360° panoramic view over the city. Watching the sunset from here is spectacular. 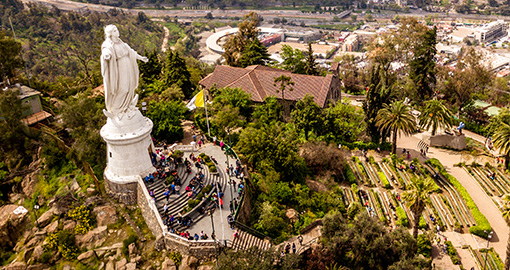 This hill (also known as Cerro San Cristobal) towers above the city in its midst. The views of Santiago and the Andes Mountains from the top are spectacular. On its summit, there is a sanctuary dedicated to the Immaculate Conception, with a 22-metre statue of the Virgin Mary, an amphitheatre and a chapel. Within the pedestal, there is a small chapel in which Pope John Paul II prayed and blessed the city of Santiago in 1987. The statue is lit up at night. The hill houses Santiago's largest public park, the Santiago Metropolitan Park. On Chile vacations, to get to the summit, you can take the Bellavista Funicular or walk up by road which takes anywhere from 30/45 minutes. At the foot of the hill are the Chilean National Zoo and a Japanese garden. 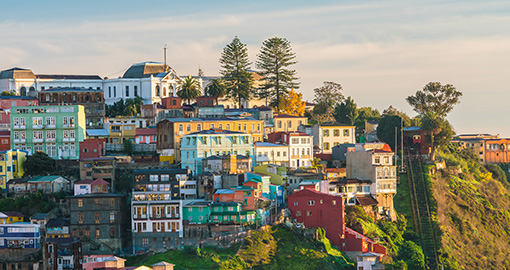 Valparaíso is located in the hills above the Pacific Ocean. It is a special historical city and a UNESCO World Heritage site known for its bohemian culture. The city has 45 hills, a number of which are reached by elevator from the centre of the city. They are used as transportation for residents as well as for visitors who want to enjoy the interesting and brightly coloured houses in the hilltop neighbourhoods and the panoramic views from the lookout points. Check out Cerro Bellavista residential neighbourhood for its 20 or so colourful murals and Cerro Polanco neighbourhood with its over 70 murals and reached by a vertical elevator. Also check out the harbour and take a boat cruise which will not only give you different views of the city but colonies of sea lions. 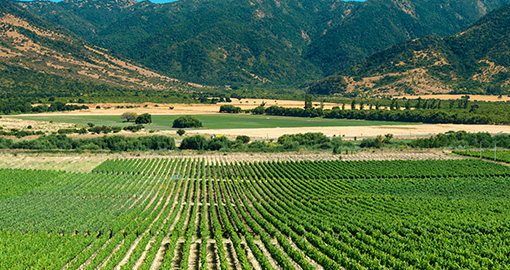 Chile is known for its excellent wines. On a Chile vacation, you can visit the wineries in the various wine-growing regions which are not too far from Santiago. The nearest to Santiago is the Maipo Valley which is home to some excellent Cabernet wines. This wine region spreads from Santiago to the Andes Mountains. Another wine region is the Aconcagua Valley 72 kilometres/40 miles from Santiago near to the highest mountain in the Americas, the imposing Aconcagua Mountain. Here you can enjoy wine tasting combined with spectacular views. A third region is the Colchagua Valley, 100 kilometres/62 miles from Santiago and recognized as the best of the wine regions in Chile featuring wines such as Carmenere, Syrah and Malbec. 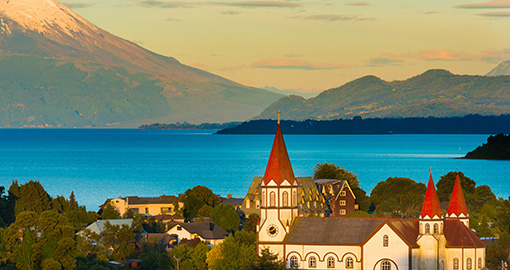 This region south of Santiago has snowcapped volcanoes, deep clear glacial lakes, rivers which run through dense forests and spectacular national parks and nature reserves. Also contained in this region are quaint villages and fishing ports. There are excellent national parks with hiking and trekking routes for you to explore. In these parks, you will find waterfalls, thermal springs and endless natural beauty. You can head to the top of the Osorno Volcano; travel on horseback to the slopes of the Cabuco Volcano You can go fishing, rafting or kayaking on any of the lakes and rivers in the region. Eco-lodges are available. Two centres in which to stay to explore the Lakes District are Puerto Varas and Puerto Montt. 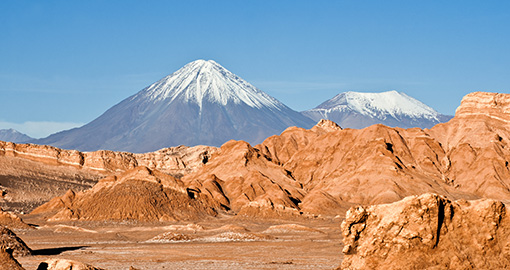 The Atacama Desert stretches a distance of 1000 kilometres/620 miles to the north of Santiago. It is known as the driest place in the world with some areas having no recorded incidence of rain but there are two rivers that are fed by snow from the Andes which create numerous oases throughout the desert. The spectacular landscapes are breathtaking. There is exceptional nature in the form of salt flats, lagoons, volcanoes, natural hot springs and geysers. There is a rich variety of flora with over 500 different species. The night sky is beyond belief and has been recognized as the clearest sky anywhere. In fact, several countries have set up observatories here to study astronomy. On Chile vacations, you can stay at one of the excellent lodges and partake in some of the numerous activities available such as crossing the desert on a bicycle, trekking excursions and hiking up the highest volcanoes. Not all activities need to be strenuous. You can participate in 4 wheel drive tours of the area or simply relax at a lodge. 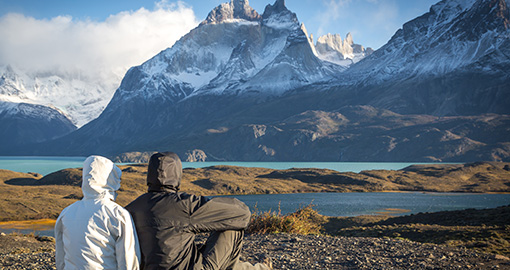 Patagonia is a vast region which takes up a fair amount of the south of Chile. The Torres del Paine National Park, one of Chile’s largest and most important national parks, is an area of amazingly scenic beauty with glaciers, waterfalls, rivers, lakes and lagoons plus it includes a large portion of the Southern Patagonian Icefield. The terrain consists of steppe, shrubland, forest and desert providing a unique habitat for a large amount of wildlife. Activities include trekking, horseback riding, climbing and fishing. There are eco-lodges in the region. 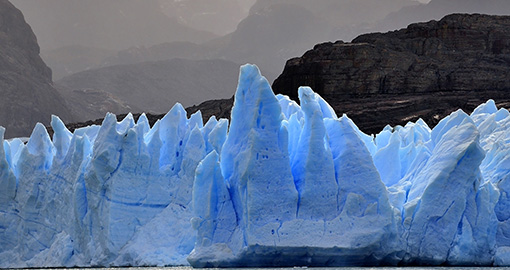 The glaciers of Chile cover almost 3% of the land area of the country and have a considerable impact on its landscape and water supply. 80% of South America’s glaciers lie in Chile. The largest glaciers in Chile are the Northern and Southern Patagonian Ice Fields. Some of the glaciers that can be visited on a Chile vacation are the Grey Glacier in the Torres del Paine National Park, one of the most spectacular in the world where you can get very close to it and the San Rafael Glacier which is reached by a small boat. 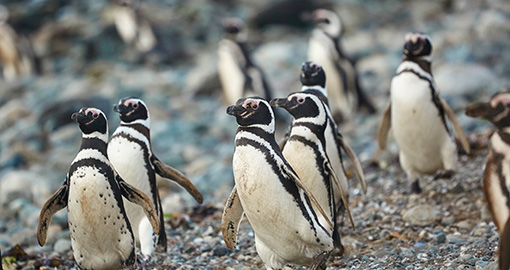 The tiny Isla Magdalena is located in the Strait of Magellan about two hours and 35 kilometres/22-miles from Punta Arenas. It is Chile’s most important penguin colony and also one of the best rookeries in Patagonia for getting a close view of this species. It’s easily accessible from nearby Punta Arenas. There are an estimated 120,000 Magellic penguins residing on the island. The penguins on Isla Magdalena are surprisingly fearless of humans, although as a way of protecting the species, visitors must stay on the designated walkway. It is an ideal spot for photographers or nature lovers wishing to be close up to friendly penguins. 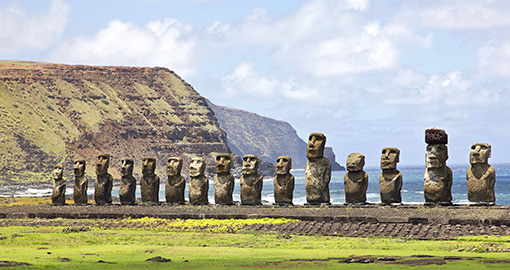 Easter Island, also known as Rapa Nui, is a Polynesian island and special territory of Chile situated in the southeastern Pacific Ocean, 3700 kilometres/2300 miles off the coast of Chile and reached by plane from Santiago. Easter Island is perhaps best known for the Moai, monolithic statues that dot the landscape and which date back to 1100-1680 AD. A total of 887 Moai have been discovered and it is believed that they were created in honour of sacred ancestors who watch over the villages. There is an air of mystery that surrounds this island making it unique and enchanting.