Things to do in Guatemala

Every country has its outstanding and special attractions. Goway has selected its top 6 things to do in Guatemala (not in any particular order) for you to enjoy on your visit to this destination. 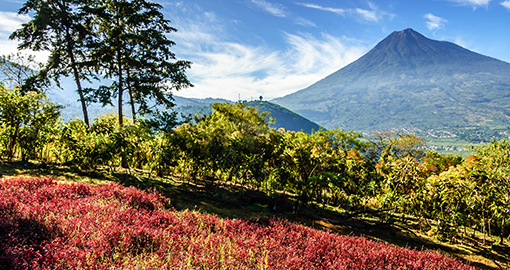 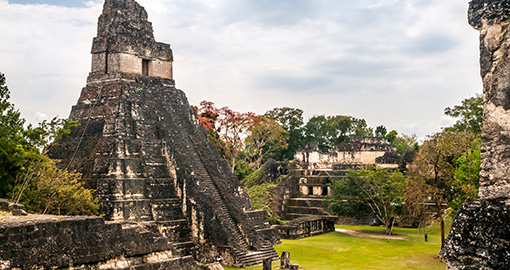 Tikal is the archaeological site where the Mayan civilization settled around 900 BC. However, most of the buildings were constructed in the 8th Century AD when Tikal was the greatest city in the Mayan world and one of the largest archaeological sites of the pre-Columbian Maya civilization. The city was abandoned in the 9th Century AD. It was officially rediscovered in 1848 as it had been overgrown by jungle foliage. Today it is a UNESCO World Heritage site with 3000 buildings covering around 16 square kilometres/6 square miles. Tikal is to Guatemala what the Great Pyramids are to Egypt. Some of the more important buildings to view on a Guatemala vacation are the Temple of the Grand Jaguar which has yielded treasures including items giving evidence to Mayan beliefs and the Temple of the Masks, so-called because of huge stone masks guarding the stairway. From atop Tikal's pyramids, Maya astronomers tracked the movements of Venus and other visible planets. 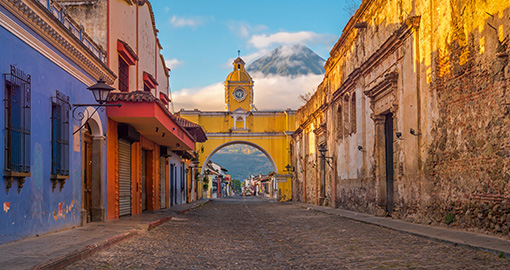 Antigua is a city in the central highlands of Guatemala famous for its well-preserved Spanish Baroque-influenced architecture and its mild climate. It has been designated a UNESCO World Heritage site. Antigua is a very attractive and charming city with its cobblestone streets full of brightly coloured colonial buildings and a favourite place for ex-pats to enjoy retirement. Its setting is spectacular with three large volcanoes hovering over the horizon. For many years, it served as the seat of Spanish power in the region from 1543 to 1776. Besides its colonial architecture, it has its modern side with a lively cultural scene and good quality restaurants and bars. Antigua’s most photographed attraction on a Guatemala vacation is the mustard-yellow El Arco de Santa Catalina (Santa Catalina arch), the last remains of a 17th Century nunnery, built so the women could cross the street without being seen. A few blocks away is the 500-year-old Iglesia de San Francisco el Grande with its spiral columns. The site has a small museum and the tomb of Saint Pedro de San Jose Betancur, who was canonized. 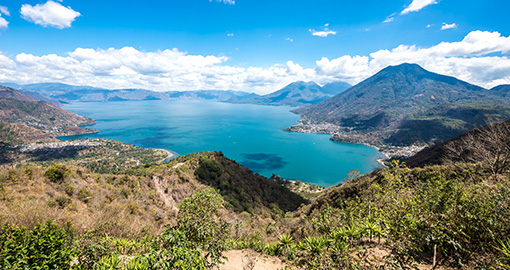 This is a most beautiful and picturesque large lake 50 kilometres/31 miles northwest of Antigua surrounded by three volcanoes. It is a filled volcanic caldera formed over 84,000 years ago. It is considered Guatemala’s most important tourist attraction and is surrounded by a number of villages in which the Mayan culture is still prevalent and the locals wear traditional dress. Several Mayan archaeological sites have been found around the lake including one under the surface of the lake. The largest village, Panajachel, was a hippy haven in the 1960s attracted by the lake’s beauty. The sunsets from Panajachel are the best on the lake. Panajachel offers a huge selection of Guatemalan-made goods. You can spend hours on a Guatemala vacation looking through it all. There are nearby nature reserves where you can take part in activities such as hiking, biking and bird watching. 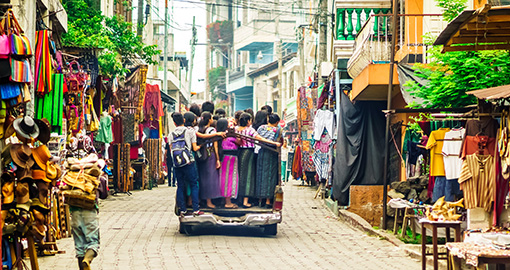 Chichicastenango is a town located in a mountainous region about 140 kilometres/85 miles northwest of Guatemala City. Apart from its charming cobblestone streets and red-tile roofs, it is known for its colourful market which is one of the biggest in the country. It takes place on Thursdays and Sundays. Vendors sell handicrafts, woodcarvings, masks, ceramics, candles and textiles. Souvenir items are at one end of the market catering to foreigners and food items, which are for the locals, are at the other end. Women’s blouses are a special item. All goods are brought in by people from the surrounding villages. Next to the market is the 400-year-old Church of St. Tomas. It is the principal place where Mayan prayer leaders practice their rituals. There are 18 stairs that lead up to the church, each one representing one month of the Mayan calendar year. 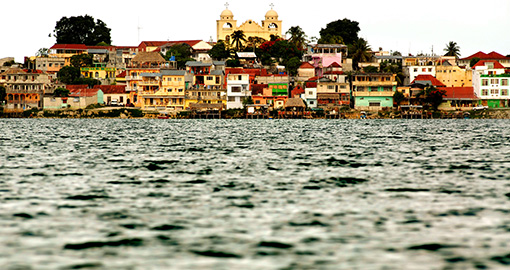 Flores is a town on Lago Peten Itza connected to the mainland by a causeway on the other side of which lie the twin towns of Santa Elena and San Benito. All three are often referred to as Flores. For many, the main reason to visit Flores is its proximity to Tikal, the most famous Mayan ruins on a Guatemala vacation. The town is full of colonial, red-roofed buildings, narrow cobblestone streets, a historic church and a Spanish plaza. The charming streets are full of restaurants. It is a quiet and peaceful place. The nearby Cave of the Serpent is a cave with many formations that resemble animals, people plus stalagmites and stalactites. The Petencito Zoo is home to monkeys, jaguars and raccoons. 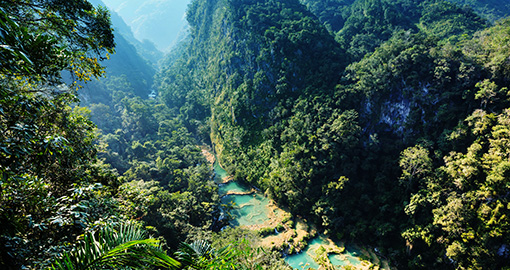 Semuc Champey is a natural monument near the town of Lanquin hidden in lush mountainous jungle. It consists of a natural 300 metre/970-foot long limestone bridge, under which the Cahabon River passes. On top of the bridge is a series of stepped, turquoise pools, a popular swimming attraction. To fully appreciate its beauty, it should be seen from above, not just by swimming in the pools. You can take a 45-minute hike through the jungle to the viewpoint, El Mirador.

The jewel in the crown on a Guatemala vacation must be Tikal, one of the largest and most important Mayan archaeological sites in existence. Tikal was at its peak over one thousand years ago with 100,000 inhabitants. There are around 3000 structures including many temples, towering pyramids and other relics plus excavation activities are still discovering many more.