FIRST-CLASS | PRIVATE-GUIDED: Jeju is known for its stunning natural scenery, fine beaches, waterfalls, cliffs, excellent seafood and mild weather. A stay here will be varied and rewarding with much to see and do. 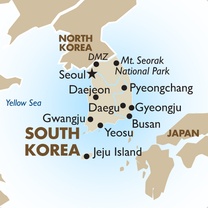 Jeju Island is a place of myths and legends. According to legend, three demi-gods emerged from Samsunghyeol which is said to have been on the northern slopes of Mount Halla and became the creators of the Jeju people who founded the Kingdom.

One in five of the population earns their living from the sea, and in many families, the women have been divers for generations. At 1950 metres/6350 feet, Mount Halla is the highest peak in Korea visible all over the island. Jeju is a popular tourist destination and offers not only good weather and beaches but exceptional natural landscapes.

On arrival, check into your hotel and then commence your sightseeing starting with the Dragon Head Rock where you can see the Haeneo woman divers working to catch seafood and then head to Samseonghyeol Shrine where according to legend, it was here that three demigods emerged from the ground to become the founding fathers of Jeju, the Halla Botanical Garden and the Jeju Folklore and Natural History.

The next day, it’s time to take in some of the stunning beauty of the island. Start with the Sangumburi Crater, an extinct volcano. The crater is 100 metres/325 feet deep. Over 400 species of plants and animals live inside the crater. Next is the Manjang Lava Cave, one of the longest lava tubes in the world. The cave is academically significant as rare species live in the cave and it is considered to be a world class tourist attraction.

After lunch, visit the Seongsan Sunrise Peak which rose from under the sea in a volcanic eruption over 100,000 years ago. With 99 sharp rocks surrounding the crater, it looks like a gigantic crown. The sunrise from the crater is magnificent.  Then it’s on to the Folklore Village and finally head to the Jeju “Mysterious Road” which connects 2 highways and earned its name, as objects and liquid appear to roll and flow up the hill instead of down, actually an optical illusion

Private transfer from your hotel in Seoul to the regional airport. Fly to Jeju Island. On arrival, meet your guide and begin a half-day tour. Visit Hallim Park, the park reaches almost 100 thousand square meters and has a variety of gardens that can be enjoyed in any season. Also visit the O'sulloc Tea Museum and Jusangjeollidae Seaside Cliff to see stone pillars piled up along the coast, a designated cultural monument. As well, see Cheonjeyeon Waterfalls. Transfer to your hotel at the end of the tour.

Transfer to the airport for your regional flight back to Seoul. Meet on arrival in Seoul and transfer to your hotel.

We can also offer this tour on a join-in/group basis. If interested, please inquire with your Goway destination specialist.