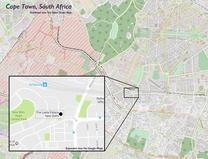 The Imperial, New Delhi's landmark Hotel, is located on Janpath. The restored 1930's Victorian style building is a perfect combination of old-world charm and modern day conveniences. A unique four story, low rise, The Imperial is just steps away from the renowned shopping and commercial district, Connaught Place.

Museums, theatres, monuments, parks and cultural centres are within close proximity to the Hotel. The Vice Regal Lodge - now the President's Palace, Parliament House and the North and South block nerve centre of the offices of the Government of India are also located close to the Hotel.

The Leela Palace New Delhi is an imposing, inspiring and right at home among the grand landmarks of the New Delhi's Diplomatic Enclave, this iconic palace style hotel makes a significant statement in terms of architecture and intent. Its architecture is inspired by Lutyens, art and embellishment by Mrs. Madhu Nair and its levels of refinement and generosity of space mirror the great palaces of the world. Breath-taking vision superbly realised. Offering hotel guests superior services and a broad range of amenities, The Leela Palace New Delhi is committed to ensuring that your stay is as comfortable as possible.

Your exploration of Old Delhi begins with a visit to the Red Fort, a symbol of Shah Jehan's Mughal power and elegance, also known as the greatest wonder of all the cities of Delhi. India's history has been closely linked with this fort. It was from here that the British deposed the last Mughal ruler - Bhadur Shah Zafar, marking the end of a three - century long Mughal rule. It was also from its ramparts that the first prime. Minister of India, Pandit Jawharlal Nehru, announced to the nation that India was free from colonial rule.

The Mughal emperor, Shah Jahan, after ruling from Agra for eleven years, decided to shift to Delhi and laid the foundation stone of the Red Fort in 1618. For its inauguration in 1647, the main halls of the palace were draped in rich tapestry and covered with silk from china and velvet from Turkey. With a circumference of almost one and a half miles, the fort is an irregular octagon and has two entrances, the Lahore and Delhi Gates.

Your tour continues with a visit to India's largest mosque Jama Masjid, originally known as 'Masjid-I-Jahan-Numa', meaning 'The mosque with a commanding view of the world'. This mosque was commissioned by the Mughal Emperor Shah Jehan and was completed in 1656.

For your next escapade, special mode of transportation has been arranged -- brightly colored cycle rickshaws, the best way to navigate the narrow, bustling alleyways taking you through the bustling "Chandni Chowk," literally translated as "Silver Square", which was designed by Jahanara Begum, Shah Jehan's favorite daughter. It was commercial hub of the Mughal era and at that time inhabited by the well-to-do families of the city.

Your tour ends with a visit to Raj Ghat, a simple square platform of black marble found on the banks of the Yamuna, at the spot where Mahatma Gandhi was cremated following his assassination on 31st January 1948. The memorial has the epitaph Hey Ram, (literally translated as 'O' Ram', but also translated to 'O God'), believed to be the last words uttered by Mahatma Gandhi