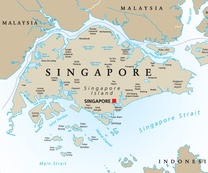 Singapore is certainly a small country with a population of only 4 million but there are a large number of reasons to spend time here. It is very much a modern garden destination in many respects with its downtown skyscrapers and 50 parks and 4 nature reserves. But it also retains its old colourful districts which are influenced by the ethnic mix that exists here. Chinese, Malay and Indian cultures stand side by side and can also be seen individually in neighbourhoods such as Chinatown and Little India.

The attractive SingaporeRiver dissects the city and one enjoyable experience is to stroll along its banks through Boat Quay and Clark Quay where one can eat, drink and take in the local neighbourhoods. Apart from the ethnicity of Singapore, another major attraction is the amazing shopping much of which is centered on Orchard Road but also in the many night markets. For the culturally inclined, there are art galleries, museums and a very contemporary performing arts centre.

Start your exploration of Singapore by visiting the downtown commercial core travelling by the Padang Cricket Club, Parliament House, the Supreme Court and City Hall. Then it’s on to MerlionPark where the symbol of Singapore, the Merlion, a mythical beast, is located some 8.6 metres/28 feet tall and weighing 70 tons. After, visit the first of the several traditional neighbourhoods. Stop at the Thian Hock Kong Temple, the oldest in Singapore with its brightly coloured façade and head to Chinatown with its restored shop houses. Digress from the neighbourhoods to enjoy the serene NationalOrchidGarden which is also known as the Botanical Gardens. Next comes Little India with its large Indian community, one of the most colourful and attractive neighbourhoods.

In the evening, marvel at the sights and sounds of Boat Quay along the banks of the SingaporeRiver with its bright lights, lively nightlife and many eating establishments.  Then take in Bugis Street, an entertainment area with an unusual atmosphere. Stop at the famous Raffles Hotel and head to the Long Bar for, naturally, a Singapore Sling. Finally have dinner at a local restaurant.

The next morning begins with a visit to the MalayVillage which depicts the lifestyle of the 50’s and 60’s here in the form of replicated kampong (village). Then visit the Changi Chapel and Museum which is a memorial to events in Singapore during World War 2.

Get a glimpse into contemporary Singapore travelling through ChangiVillage with its beaches and seafood restaurants and Tampines New Town, a modern neighbourhood to complete your exploration of this dynamic country.

Rendezvous Hotel Singapore draws its inspiration from its surrounding Arts and Heritage district [Bras Basah Bugis]. The hotel is within proximity to the key districts of the city - a 10-minute walk from the Orchard Road shopping belt and a 10-minute drive from the Central Business District. Just 5-minute walk from the hotel are the Bras Basah and Dhoby Ghaut MRT Stations, which will connect you across the whole of Singapore. Rendezvous Hotel Singapore offers 298 comfortable rooms and suites featuring state-of-the-art amenities that have been designed with your high-performance business and leisure needs in mind.

An orientation tour that showcases the history, multi racial culture and lifestyle that is Singapore. See the city's colonial heritage as we drive around the Civic District past the Padang, the Cricket Club, Parliament House and the National Gallery Singapore. Stop at the Merlion Park for great views of Marina Bay and a picture-taking opportunity with the Merlion, a mythological creature that is part lion and part fish. The tour continues with a visit to the Thian Hock Keng Temple, one of the oldest Buddhist-Taoist temples on the island, built with donation from the early immigrants workers from China before driving past Chinatown. From there we proceed to the National Orchid Garden, located within the Singapore Botanic Gardens(a UNESCO World Heritage Site), which boasts a sprawling display of 60,000 orchid plants comprising of 400 species and more than 2,000 hybrids. Our final stop at Little India will enthral you with the scent of spices, jasmine, orchid garlands and exotic fruits.

Discover the awe-inspiring world of life in the ocean at S.E.A. Aquarium, the world largest aquarium. Explore more than 800 species of marine animals such as majestic mantra rays and over 200 sharks through the world's largest window to the ocean.

With the Sentosa Line, enjoy another cable car ride as you fly over the tree-tops with a panoramic view of Siloso Beach. Watch out for the gliders on the Megazip as you arrive into the last station on the Sentosa Line Siloso Point Station.

Explore Fort Siloso Skywalk, a hidden gem tucked away in a corner of Sentosa! Take the glass elevator up the imposing 43-metre tall tower, you get a commanding view of the surrounding area extending out to the sea and the Southern Islands off Singapore. At the viewing platform, there is a portion with glass-bottom, those who dare may stand and look down.

End you day at Sentosa with the Award Winning Outdoor Night Show Wings of Time set against the majestic open sea. Be Mesmerized by a multi-sensory presentation of water display, laser show, fire effects and spectacular music as you soar through space and time in a magic adventure.