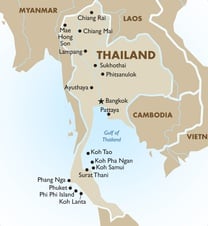 This 8-day Thailand escape begins with four nights in Bangkok, then takes you on to a health resort in Phuket for some dedicated R&R.

Landing in Bangkok, transfer to the Como Metropolitan Bangkok, your home for the next four days in Bangkok. A city tour helps you get your bearings and includes a visit to the spectacular Grand Palace. Visit the Emerald Buddha and Reclining Buddha temples, unwinding with a 30-minute massage at the latter. A boat then speeds you to colourful Wat Arun. The rest of your time in Bangkok is taken at leisure, and options are plentiful. Take advantage of the facilities at your hotel, or explore more of the Thai capital.

Transfer to Phuket on the Andaman Sea, and check into Amatara Wellness Resort, the island’s only luxury resort spa tucked away in a quiet corner of the island. This 5-star hotel promises rejuvenation and an escape from the worries of the world. Amatara Resort & Wellness is committed to health and wellness. Personalized wellness practices designed by on-hand Wellness Consultants, and delicious, healthy cuisine from the organic restaurant, The Retreat. Staying in one of the resort’s gorgeous rooms, from its 22 pavilions to 48 suites to 35 villas with private pools, you’ll have the freedom to enjoy the resort’s luxury amenities and recharge with spa treatments and personalized wellness plans. You’ll have two full days at leisure to relax, enjoy the resort’s activities and treatments, and explore the surrounding charms of Phuket.

On arrival at Bangkok airport, you will be transferred to your hotel.

The balance of the day is at leisure

Start the morning with a trip to Wat Pho, arguably Bangkok's most enchanting temple. Arrive just as the resident monks gather for their morning chants. Witness this deeply spiritual ritual and gain a better sense of Thailand's Buddhist heritage. After the chants, take a walk around Wat Pho and see the vast collection of religious treasures on display.

The tour then continues to the nearby Grand Palace, which has served as the seat of Thailand's revered Royal family for more than two centuries. Take a walk around the vast grounds, stopping in to explore the various temples, throne halls and museums within the compound. Visit the Emerald Buddha, the most revered Buddhist image in Thailand, and hear about its mysterious origins.

Take a break for lunch in a riverside restaurant, enjoying delicious Thai food with fabulous views. Then continue onwards to visit Wat Trimitr, on the edge of Chinatown, which houses the world's largest solid gold Buddha.

Afterwards take a long-tail boat and move away from the high rises of the city and venture through the quiet canals upon which the city was originally built. Catch glimpses of the olden days, passing by charming neighbourhoods built on the water's edge. Return to the main waterway, the Chao Phraya River, to visit Wat Arun and admire its incredible decoration with ceramic tiles depicting figures of Chinese soldiers and animals.

After a full day of exploring Bangkok, you'll be returned to your hotel in the late afternoon.

Early this morning, you'll will be picked up from your hotel at 7:00am to escape from the buzz of Bangkok for an adventure by bike and boat. Travel south of the city to the Mae Klong Delta area and visit Lad Plee Floating Market. Walk through the market to see wooden houses perched on the edge of the canal including one that once was an opium den. Continue to DamnoenSaduak, Thailand's biggest and most famous floating market.

After discovering the sights and sounds of the floating market, embark on a long-tail boat to cruise a maze of canals cutting through local villages and various plantations. This eye-opening boat ride offers a glimpse of traditional Thailand where locals are going about their daily life with the canal as the focal point. After the boat ride, start your bikejourney to Wat Bang KhaeNoi, a temple famous for its teakwood carvings. Continue passing through coconut plantations, fruit orchards and along quiet backroads. Stop often for photos and to explore Wat Bang Kung, a quirky temple held up by a huge banyan tree.

Take a rest at midday and enjoy lunch at a scenic riverside restaurant. Then it's back on the bikes for more riding on picturesque trails toward Amphawa Floating market. Explore this colourful canal side market and its nearby temples before returning to your hotel in Bangkok.

Transfer to the Bangkok airport for the short flight (not included in price) to Phuket.

On arrival, transfer to the resort where the rest of the day is at leisure.

Two full days to enjoy the many facilities of the resort.

Following breakfast, transfer to the airport for your onward flight.

Part of the package price above is a choice of 1 of the 6 following programs offered at the wellness resort. Please let your Asia Expert know which is the one you would like at time of quote or booking;