If you head on a vacation to Iceland, you won’t be lacking for sightseeing options. The country is full of beautiful natural landmarks. You could stop every few minutes and find some fascinating waterfall, beach, or rock formation to occupy your attention.

But if you’re like me, you’ll probably want to see the tried and true spots in addition to hidden gems. Thus, you’ll likely find yourself exploring the Golden Circle during a part of your Icelandic vacation.

The Golden Circle is the most popular tourist route in Iceland. It runs between three major attractions to the east of Reykjavik: Thingvellir National Park, the geothermal pools of Haukadalur, which includes the Great Geysir and Strokkur, and Gullfoss, one of the largest waterfalls in the country. It’s accessible on a day trip from Reykjavik, either as part of a coach tour or driving in your own rental vehicle. The entire route is around 300km looping from Reykjavik and will take the better part of the day if you spend a couple hours at each landmark.

If you have the option to choose between a coach tour and an independent self-drive, pick the self-drive as it will let you go at your own pace and spend as much or as little time at each site as you like. Furthermore, the Golden Circle is very popular, and thus, almost always busy. Driving yourself lets you avoid the usual tourist hours or visit the sites in whichever order you choose. Most coach tours start at Thingvellir and end at Gullfoss, which means they visit Thingvellir in the mid-morning, Geysir around noon and Gullfoss in the afternoon. So if you want to avoid the peak crowd hours, visit these spots in a different sequence.

MODERATE | SELF-DRIVE: A wonderful way to leisurely enjoy Iceland on your own, stop as you please and for as long as you wish to take in the extraordinary beauty of Iceland's incredible Golden Circle. Volcanoes, glaciers, lava fields, hot springs, gushing waterfalls and more are all yours to discover and in the span of just a few days.

What are the landmarks on the Golden Circle?

Thingvellir is usually the first stop on Iceland’s Golden Circle, about a 45-minute drive northeast of Reykjavik. This national park is important for two key reasons. One is that it’s located on the rift between the tectonic plates for North America and Eurasia. The ravine that you walk into is the actual rift between the two plates, which is fascinating and gives the park its stunning, rugged look, with jagged rocks seemingly jutting out of the ground on both sides of the trail. The second is that Thingvellir used to be home to the original Icelandic Parliament, known as the Althing, which was established in 930AD. It combines the natural and cultural appeal that defines Iceland as a destination. 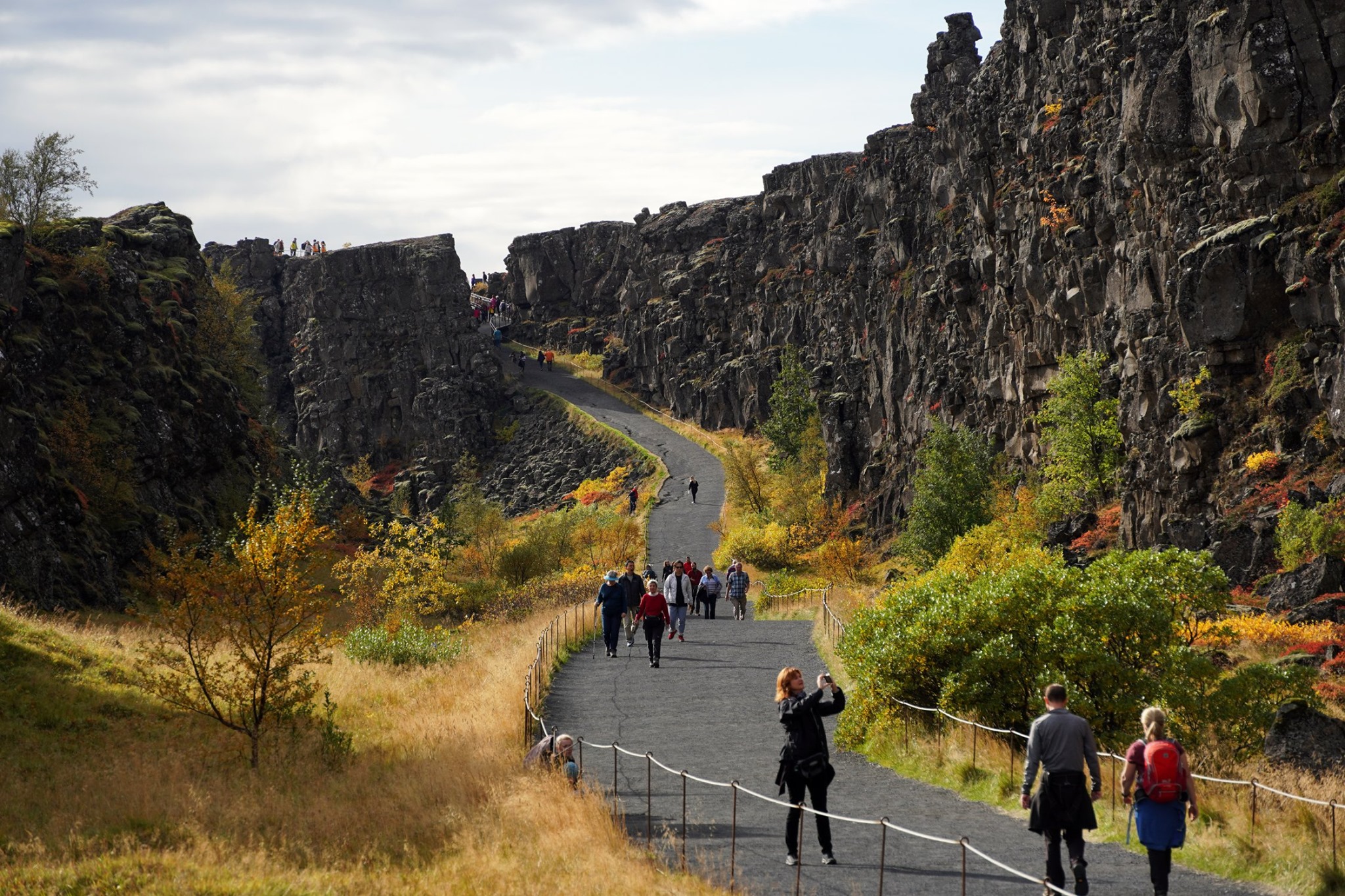 When you arrive at Thingvellir, you’ll either get off your coach or park your car. If you’re driving, be sure to pay for parking or you’ll get a ticket. It may not be abundantly clear that the parking is pay parking, but there are laser scanners that will register your license plate on your way out and charge your rental company if you haven’t paid. So be sure to pay at the machines near the washrooms and avoid any hassle.

Once you leave the parking lot and main information centre, you can head for a walk along the looping trails throughout the park. Right at the start you’ll walk down a ramp between the rift itself and see the jagged rocks of the tectonic plates right off the bat. Once you reach the bottom of the hill, you’ll reach a fork in the trail. If you follow the right trail to its end, you’ll reach Silfra, where you can actually go snorkelling in the water between the plates. The water is chilly, but you’ll have large wet-suits to keep you warm. The water here is so clean and pure that you can actually drink directly from the stream if you wish.

You’ll find Thingvellirkirkja, the local church, a bit northwest of Silfra, alongside some other small buildings running next to the stream. There are various trails that follow the streams, some connecting to other parking lots, which give you different options if you want to start your walk away from the main starting point. If you head all the way north along the trails, you’ll eventually have the option of heading up the hill or turning back. Keep going up the hill and you’ll reach Oxararfoss, a lovely waterfall that’s hidden from view on the main trails. But if you walk up the hill and curl around the rocks, you’ll reach this lovely spot. Snap a picture in front of it and then head back down the hill and continue back south.

You’ll pass the Logberg or the Law Stone along your way back, which is where the original Althing used to be located. There’s no actual structure remaining, but there is a flagpole that marks the likely spot of the old parliament. This is also where Iceland declared independence from Denmark on June 17, 1944. It was pouring rain that day, but that didn’t stop thousands of Icelanders from gathering together in the park to celebrate their newfound freedom. 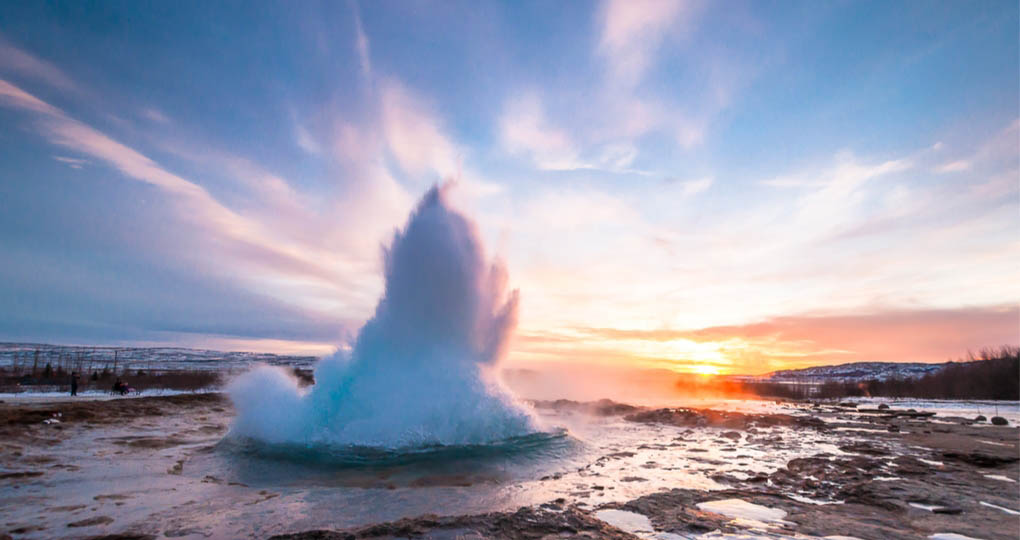 After Thingvellir, if you drive another 60km east you’ll reach the next stop on the Golden Circle, the geothermal area of Haukadalur, more commonly known as Geysir after the giant geyser at the area’s centre. Depending on which road you take and how many stops you make (there’s a lovely stop along the No. 36 right before you turn east onto the No. 365 that is worth savouring), you’ll reach Geysir about 40 minutes after Thingvellir.

Park near the information centre and gift shop and cross the street to reach the boiling mud pools and geysers. Be sure to keep your distance from them and not cross over the ropes and touch the water. Even the little streams coursing off onto the road are near boiling. There are several geysers and bubbling mud pools here, but two key ones to pay attention to: Geysir and Strokkur.

Strokkur is the first one you’ll reach and the main attraction. It explodes every five to 10 minutes, so if you stick around long enough, you’ll enjoy quite the sight. Some eruptions are only a few metres tall, while others can reach at least 10 metres in the air. It’s worth spending at least half an hour around Strokkur to experience the variety of its eruptions. Sometimes the eruption will come with what can only be described as a low sonic boom, where the earth itself heaves with guttural power. It’s striking to witness.

The Great Geysir is not nearly as regular as Strokkur. In fact, it hasn’t erupted in years. However, you can still admire the size of this particular pool and say that you’ve seen the original geyser once you visit. Thing is, the word “geyser” actually comes from the name Geysir, not the other way around. It’s the original, even if it’s a bit quiet compared to more flamboyant Strokkur. The final stop on the Golden Circle is Gullfoss, the Golden Waterfall, which is around a 10-minute drive east of Geysir. It gets its name from the fact that sunlight can make the water look golden on clear mornings or late afternoons. It’s one of the largest waterfalls in all of Iceland and consists of two waterfall systems. The larger one is further up the river and the narrow one is down below, with water coursing from one to the other before plunging into the earth.

You’ll probably hear the waterfall before you ever see it; it’s that loud. Once you park, you’ll have the chance to check out the visitor centre, gift shop, and restaurant, but unless you need to make a washroom break, it’s best to get your camera ready and check out the waterfall itself.

There are two paths to follow to enjoy views of the waterfall: one along the top of the cliff and another that heads alongside the water down below. I recommend doing the top path first as it gives you the fuller view of the waterfall. As well, it’s always easier to hike up before hiking down (do it the other way around and you may be tired for the uphill walk). There are several curves in the trail leading to good spots to view the waterfall from, but make sure to go to the further point along the trail to get an unobstructed view of the waterfall in its entirety. This is the best spot to appreciate the sheer size of Gullfoss.

Afterwards, return the way you came and head down the lower path hugging the cliffside along the waterfall. You’ll reach a rocky outcrop that you can climb up to get right in front of the waterfall (just be careful on the wet rocks). The water is loudest here and you’ll get wet from the mist and occasional splashing water, so make sure to wear something waterproof. Apparently this outcrop is known to get submerged during the rainy season, so it may not be accessible depending on when you visit.

If you follow both paths, you’ll get to enjoy the waterfall up close and from afar. It’s a beautiful waterfall and although it’s not the largest in the country, it wouldn’t be a proper Icelandic vacation if you didn’t see it along with the rest of the Golden Circle.

Reykjavik and the Golden Circle

DELUXE | TAILOR-MADE: Discover trendy Reykjavik and the beautiful scenery of the Golden Circle and South Iceland on this introductory tour of Iceland. Based in Reykjavik, you’ll experience a taste of the city’s culinary scene before exploring Solheimajokull, the Golden Circle, and the subterranean chambers of Thrihnukagigur Volcano.

FIRST-CLASS | SMALL GROUP: Journey through Iceland from Reykjavik to discover a country of natural beauty that includes majestic waterfalls, impressive lava flows, huge glaciers, volcanic craters, gushing hot springs, a folk museum and the opportunity to see seals and puffins close up. Along the way, an expert English-speaking guide will draw out the wonders of the Land of Fire and Ice to you and like-minded travellers on this small group exploration.

MODERATE | ESCORTED COACH TOUR: Explore the natural wonders of Iceland on this coach tour beginning and ending in Reykjavik. During your journey across the island nation, you’ll gaze upon the Golden Waterfall of Gullfoss, explore the area surrounding Eyjafjallajokull Volcano, and venture to the face of Vatnajokull Glacier, all beneath the living northern sky.