The Indian Rupee (INR) is the main form of currency in India, and as in many developing nations, cash is still more common than credit and debit cards in India. It’s easy to take out cash at ATMs, which are located at all banks, shopping malls, markets and many other locations.

Hindi is the main language spoken across India. You’ll find English is also spoken by the majority of people in major cities, such as Delhi and Mumbai.

India is a hot destination year-round, though the ‘winter’ season from October till March is the best time to visit the country as temperatures are more moderate, even chilly in some parts of the country.You will also get to experience some of India’s most colourful and lively festivals like Diwali and Holi, which are celebrated between these months.

Most of India experiences a subtropical climate, resulting in very hot summers, a humid rainy season, and mild winters. The country has five seasons, Spring(Mid February til April), Summer (April till June), Monsoon (July till September), Autumn (Mid October till mid-December), and Winter (December till February), each bringing a very different appearance, flavour, and range of activities to your travels.

India tends to be more ideal for cultural travellers than someone looking for an idyllic escape at a beach resort. If it’s your first time to India, popular stops like Delhi, Jaipur and Agra are a great introduction to the country. However, with each city offering a different experience of food, religion, culture and history, there’s no doubt India is the perfect place to channel your spiritual side. 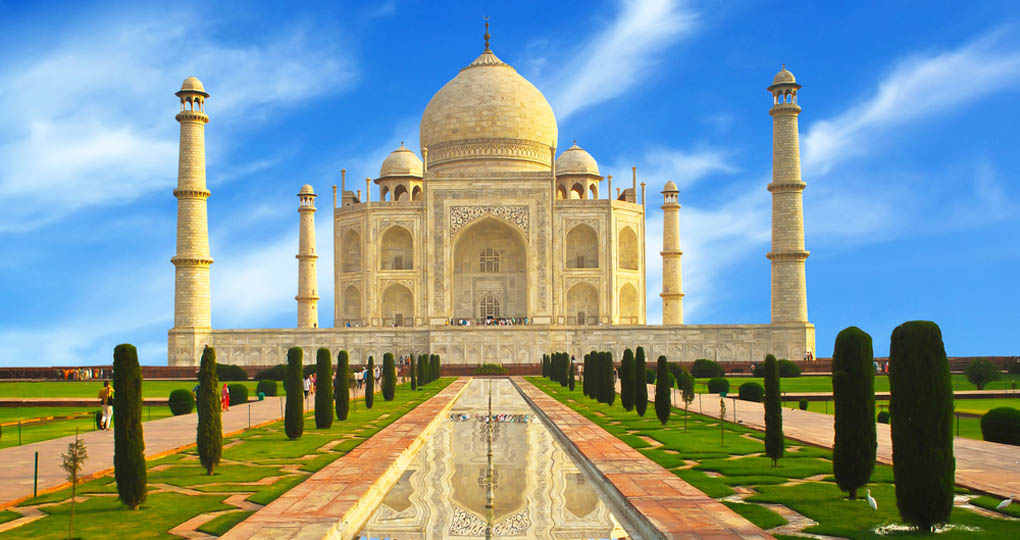 In the United States, many major cities have direct flights to New Delhi and Mumbai, including New York, Chicago, Dallas, and Los Angeles.

In Canada, most direct routes go through Vancouver or Toronto, with connections available to these cities from other parts of Canada. 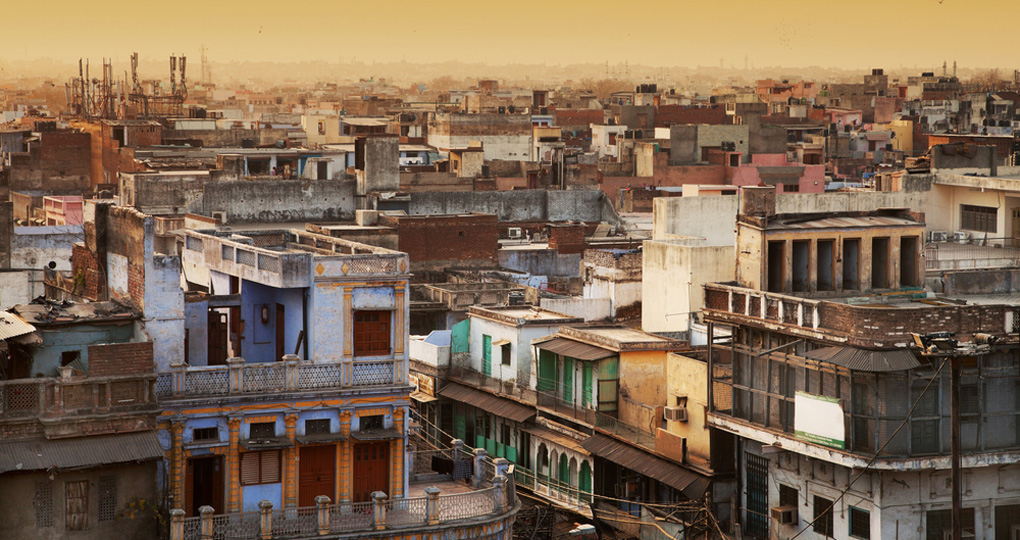 Located in northern India, Delhi is India’s capital and largest metropolis. It’s considered one of the oldest cities in the world, immersed deep in an enriched cultural history. Also known as the ‘Eternal City,’ Delhi is said to have been destroyed and built 11 times, and today is the starting point for many India tours.

Stretched across the banks of the Yamuna River, in the northern Indian state of Uttar Pradesh. Agra is considered one of the most important Mughal cities. Built-in that period are three UNESCO World Heritage sites - Fatehpur Sikri, Agra Fort, and the world-famous Taj Mahal.

Built during the 18th century as India’s first ‘planned city’, Jaipur attracts travellers looking to visit its impressive palaces and forts like Amber Palace and Hawa Mahal. Nicknamed the ‘Pink City’ for its coloured buildings, it's also the capital of Rajasthan. Rich in culture and tradition you can find many beautiful handicrafts, fabrics and jewelry here.

Considered the most romantic city in India, Udaipur is situated in the heart of the Aravalli Mountains and is famed for its lakes and Rajout-era palaces. Visitors flock to Udaipur for its beautiful scenery and stunning architecture, whitewashed buildings, temples, and Havelis (traditional mansions).

Situated on the banks of the Ganges River in Northern India, Varanasi is the oldest living city in the world and a very important stop on many India tours. Witness devotions such as burial rituals or people coming to wash their sins away in the Ganges waters. Known as the ‘holiest city in India’, Varanasi has been a pilgrimage site for Hindus for many centuries.

Sitting on the west coast near Goa , Mumbai is the largest city in India. Famous for being at the centre of the Bollywood film industry, Mumbai is also the economic, commercial, entertainment, and fashion capital of India. The city has a deep cultural history and is home to three UNESCO World Heritage sites like the Elephant Caves and Chhatrapati Shivaji Maharaj Terminus.

Cochin (also known as Kochi) is situated on the southwest coast of the Indian peninsula and is the largest city in Kerala. A major harbour from the times of the British and Portuguese, it embodies a blend of Indian and Western culture. A great place to find unique sarees, handicrafts and jewelry. You also find many architectural and historical sites in Fort Kochi. 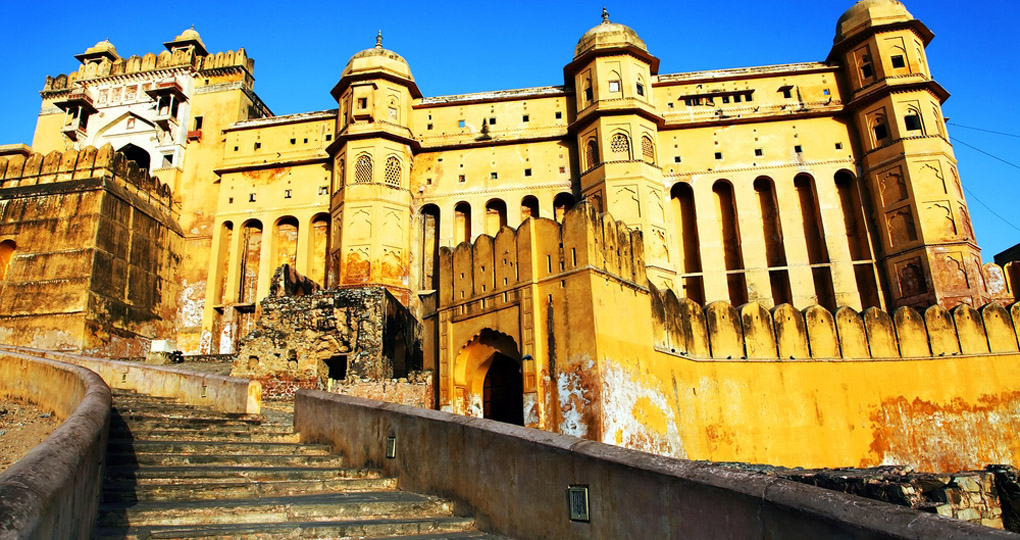 Other Highlights of India Off the Beaten Path

Jodhpur is a popular tourist destination, featuring many palaces, forts and temples, set in the stark landscape of the Thar Desert. It is popularly known as Blue City and Sun City. The old city circles the Mehrangarh Fort and is bounded by a wall with several gates.

The golden city of Jaisalmer stands courageously as India’s western sentinel. The golden rays of the setting sun draw a heavenly picture on its sands, and the magnificent wood and stone-carved mansions and buildings display the love of the Rajputs toward the fine arts.

Goa is a state located on the western coast of India, along the Arabian Sea. Goa is India’s smallest state, known for its beaches in Palolem and Baga. Not only a great city for nightlife and beaches, Goa includes a blend of Portuguese, Indian, and Islamic architecture. 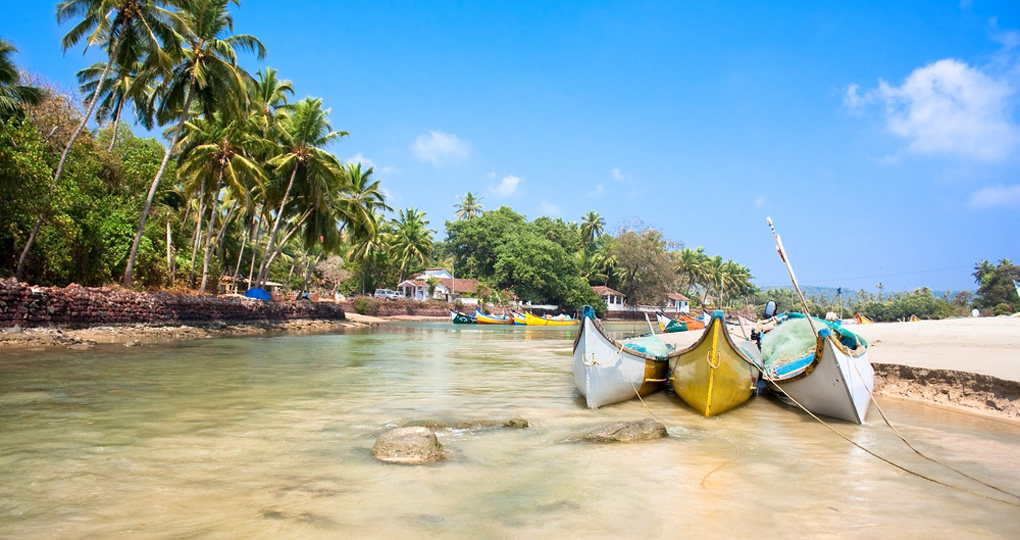 Top Activities and Experiences in India

Arrange an early morning visit to the Taj Mahal for a truly atmospheric first glimpse of this wonder. Watching the sunrise over this magnificent monument, spend an hour in tranquil solitude exploring the serene ground, inducing the various gardens with your guide.

Another early morning, this time for a boat ride along the Ganges. For centuries, these waters have drawn religious pilgrims looking to bathe in the healing waters of the river. Many of these rituals are performed at sunrise, making it the perfect time to take in the scents, sights and sounds of the holy river.

Ever wonder what it was like to live like royalty? For centuries India was divided into kingdoms, and many of its heritage palaces have been converted into boutique hotels. Experience pure luxury and spend the night at Rambagh Palace in Jaipur, Taj Lake Palace in Udaipur, or in Jodhpur at the Umaid Bhwan Palace, built by the Rathore dynasty.

Driving deep into the dense jungle of Ranthambore, you’ll explore Ranthambore National Park by jeep. Following trails used for tiger tracking, you’ll not only have the opportunity to see tigers but also exotic birds, sloth bears, leopards and hyenas.

There’s no denying India has some of the most magnificent palaces and forts in the world. Today, most have either become UNESCO heritage sites, like Red Fort in Delhi, or have been converted into luxury hotels like the Lake Palace in Udaipur. Stepwells, also known as Bawdi or Baoli in India were historically used to irrigate crops but also provided a stairway for people to access the water below. Many stepwells are still used across India. The most popular ones can be found in Gujarat, Chand Boari in Rajasthan or Agrasen Ki Boli in Delhi.

If you’re looking for a spiritual experience, either personally or to satisfy your curiosity, few destinations are more deeply rooted in spiritually then India. While many consider Varanasi to be one of the holiest places in India, there are many spiritual sites to visit. Explore Puri’s Jagannath temple (one of the most popular pilgrimage sites in India), the living temples of Tamil Nadu, India’s spiritual capital in Bodhgaya (where Gandhi was enlightened) or the Basilica of Our Lady of Good Health (Velankanni), known around the world as the church of miracles. You can also visit The Lotus Temple (Baháʼí), Jama Masjid (Muslim), Akshardham (Hindu), the Golden Temple (Sikh) and Sarnath (Buddhist).

India has amazing handicraft and textile shopping. Hire a driver for the day and check out some of the best shopping areas in Delhi, Jaipur or Mumbai. You’ll marvel at the colourful textiles, fragrant spices and stylish Indian clothes, jewellery and furnishings for the whole family.

Explore the backwaters in Alleppey

Lush green palm trees, fishing villages, coconut groves and paddy fields are only part of the beautiful landscapes you’ll see while cruising through the ‘backwaters’ of Alleppey. Sit back and relax as you glide past small villages, observing rural village life, coconut harvesting, and ending with a delicious lunch onboard. 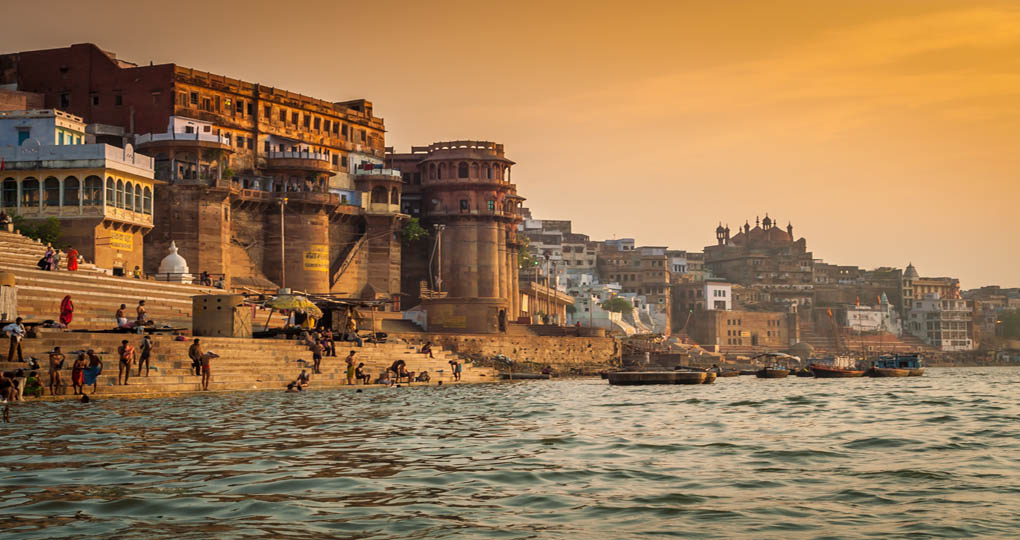 A popular Indian street food, with a base of puffed rice, peas, spices and other vegetables. Originating from North India, this dish can be found in basically any city throughout India.

One of the best Indian dishes, Biryani is traditionally made with basmati rice and cooked with various spices, meat, fish, eggs and vegetables. Foodies take note, this dish is full of flavour with a punch of spices.

This is a world-famous Indian dish. Chicken is marinated with spice and cooked in a cylindrical clay oven known as a Tandoor. The chicken is then prepared with yoghurt and spices. If you’re not into heavy Indian spices, this is a perfect mild option.

A staple in South India, this is a fermented crepe or pancake made from rice batter and black lentils. Dosa can be filled with vegetables and sauce and is often eaten as a quick meal.

A popular tropical fish that many say can be cooked in over fifty ways. In Bengal, it can be smoked, fried, steamed or baked, and is prepared with mustard seed paste, curd and eggplant. 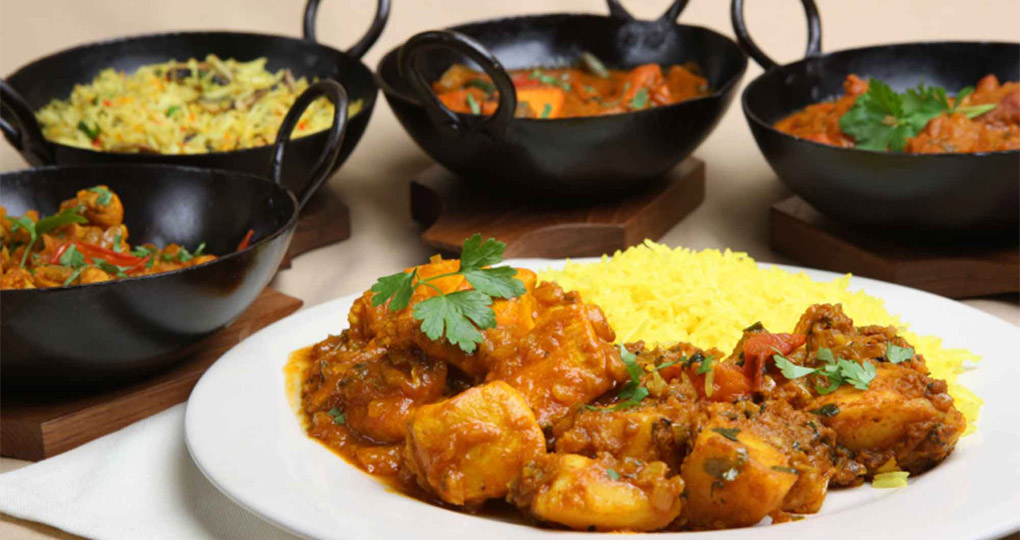 Most Popular Itineraries for India

Experience the Essential Golden Triangle as a tantalizing introduction to India. Walk the streets of bustling Delhi, visit the breathtaking Taj Mahal in Agra and end your trip in colourful Jaipur with its sprawling markets and stunning Amber Fort. India Odysseyis the perfect longer locally escorted tour, concentrating on the colourful destinations of Northern India. The sights and sounds plus the ambience will captivate you.

Bring a refillable water bottle, if possible. Tap water is not safe to drink but many places will have filtered water that you can fill your own bottle with rather than purchasing bottled water. Carry your own reusable or bamboo straws to avoid the use of plastic straws when ordering drinks. When shopping, say no to plastic bags, instead bringing your own reusable one to carry your purchases in.

Many airlines fly direct to and from India, but adding another destination during your travel is still fairly easy. If you’d like to experience more of South Asia, Sri Lanka and Nepal are good options. Tokyo, Singapore, Hong Kong, and Shanghai are also options to add on a city break, particularly as stopovers, depending on your airline. For some contrast, consider visiting Dubai or Doha for a few days in the glamorous corner of the Middle East.

FIRST-CLASS | PRIVATE-GUIDED: Experience the Golden Triangle as a tantalizing introduction to India. Walk the streets of bustling Delhi, visit the breathtaking Taj Mahal in Agra and end your trip in colourful Jaipur with its sprawling markets and stunning Amber Fort.

FIRST-CLASS | PRIVATE-GUIDED: Immerse yourself in all the wonders of South India on this 15-day private tour which takes you from Chennai to Mumbai with so many highlights in between. This is a great tour for travellers who have perhaps been to India before and are looking to explore further!