The History of Rovos Rail

There's a story behind all of the Rovos Rail locomotives, their acquisition and restoration. Each one has a distinctive character and charm and all are named after members of owner Rohan Vos' family. The first engine acquired was No 2702 Bianca, a Class 19D locomotive built by Borsig in 1938. It was purchased in 1986 from Loewenthal's Scrap Metal. Dunn's Locomotive in Witbank was commissioned to return the 50-year old workhorse to running condition.

The Rovos Rail staff then carried out cosmetic improvements, including a superb paint job, making Rovos Rail's first loco a beautiful sight. No 2701 'Brenda', a Class 19D locomotive with coincidentally a number just one digit away from Bianca, was bought from Chick's Scrap Metal while staged at Volksrust in Natal and restored at the workshops in Witbank. 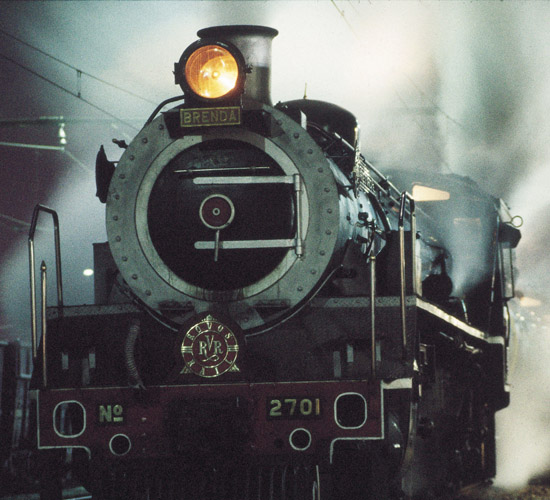 Rohan Vos had had his eye on No 3360 Shaun since he first saw it standing on the scrap line at Witbank, way back in 1986. It was purchased a decade later and restored by Rovos personnel. The oldest engine in the stable is also the smallest. No 439 Tiffany a Class 6 locomotive, is one of 40 locomotives, the first of which was delivered in 1983, and was built by Dubbs & Co. The Vos family first saw the dainty locomotive on the platform at Winburg Station in the Eastern Free State, For Rohan and Anthea Vos; it was love at first sight. The engine was purchased in 1987 and returned to the rails by Dunn's of Witbank. The locomotive is named for their youngest daughter.

The latest addition to Rovos Rail is a Class 25 NC locomotive that has been converted from a coal burner to an oil-fired engine. It completed an 18-month overhaul and refurbishment, which brought a gleam to every bit of brass and a glow to the faces of the team of people who had painstakingly restored her to her prime. A highlight of the official opening of the new Capital Park Station on the 7th of May 1999 was the christening ceremony performed by Rohan's mother, Mrs. Marjorie Vos, as she cracked a bottle of champagne across the 'bows' of Class 25NC No 3484.

Use of steam has become increasingly difficult over the past years, as more and more water and coaling facilities have been scrapped. Wherever practical the trains may be drawn by any one of the five vintage steam locomotives. Where facilities no longer exist, diesel or electric locomotives will be used. Rovos Rail will, however, endeavour to ensure that arrivals and departures in Pretoria are steam hauled.