Things to do in Morocco

Every country has its outstanding and special attractions. Goway has selected its Top 9 Things to do in Morocco (not in any particular order) for you to enjoy on your visit to this destination. 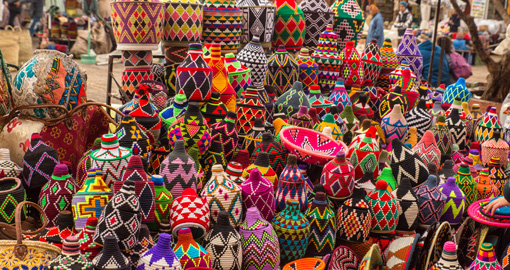 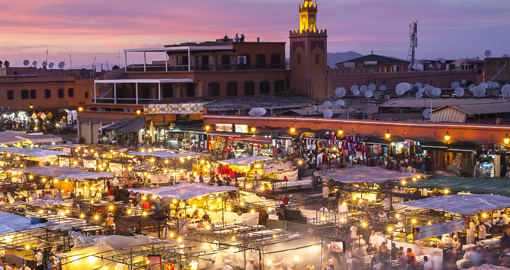 This is both a square and a market in Marrakesh located in the medina quarter (old city) which is a must-visit on Morocco vacations. During the day, the square is occupied by merchants selling everything from leather goods to orange juice. There are also a number of traditional snake charmers. As the day progresses, acrobats, musicians, fortune-tellers, artists, male dancers called Chleuh Dancing Boys, story-tellers relating tales in Berber or Arabic (entertainment for the locals), magicians, peddlers with magic potions and, as darkness falls, the square is filled with food stalls. 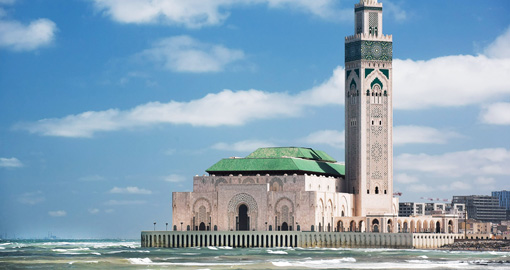 The Hassan II Mosque is the largest mosque in Morocco, the second largest in Africa and the 3rd largest in the world after those in Mecca and Medina It is a major landmark in Casablanca. It was built in 1993 to commemorate the king’s 60th birthday. Its minaret is the world's tallest at 210 metres/690 feet in height. It has 60 stories and is topped by a laser beam which is directed towards Mecca. It stands on a promontory overlooking the Atlantic Ocean. The walls are made of hand-crafted marble and it has a retractable roof. The mosque can hold as many as 105,000 worshippers, 25,000 inside the mosque hall and another 80,000 on the mosque's outside ground. The prayer hall is spectacular and 6,000 craftspeople worked to assemble it. It represents a mixture of Islamic and Moroccan architectural styles Tours are conducted in several languages. 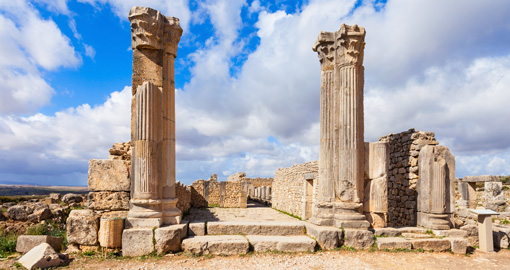 Volubilis is a partly excavated Berber and Roman city near the city of Meknes and is commonly considered to be the ancient capital of the kingdom of Mauretania. It was developed in the 3rd Century BC as a Phoenician settlement. Under Roman rule from the 1st Century AD, it expanded significantly with a number of major public buildings including a basilica, temple and triumphal arch. It continued to be inhabited for another 700 years but by the 11th Century, it was abandoned. Although only about half of Volubilis has been excavated, a number of major public buildings are visible. Many private buildings, including the mansions of the city’s elite, have also been uncovered. They are noted for the mosaics that have been discovered in a number of buildings. It is a UNESCO World Heritage site on trips to Morocco, listed as being "an exceptionally well-preserved example of a large Roman colonial town on the fringes of the Empire". 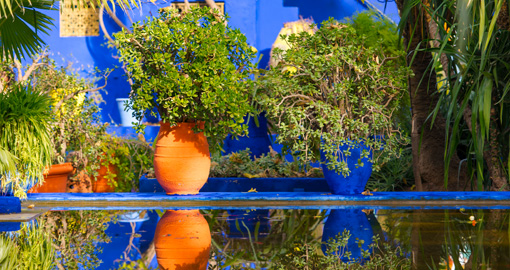 This garden was created in the 1920s by the French painter Jacques Majorelle. It is a two-and-a-half acre botanical garden and an artist's landscape garden. Inside is a Cubist villa designed by French architect, Paul Sinoir in the 1930s. The property was the residence of the artist and his wife from 1923 until the 1950s. In the 1980s, the property was purchased by fashion designers, Yves Saint-Laurent and Pierre Berge who worked to restore it. Today the garden and villa complex is open to the public. It contains marble pools, banana trees, bamboo groves, coconut palms and bougainvillaeas. Perhaps unsurprisingly as the garden was designed by a painter, it is composed and coloured like a painting. The villa itself houses the Islamic Art Museum of Marrakech, the Berber Museum and the Musee Yves Saint Laurent. It also features a collection of Majorelle's paintings. The garden contains an important collection of cacti and sculptures. 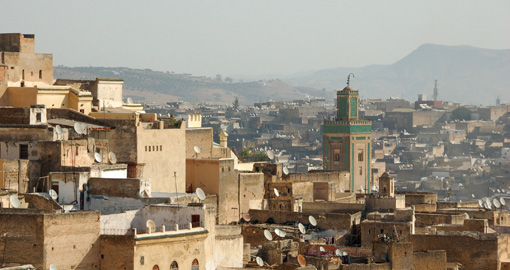 Fez is considered the cultural and spiritual capital of Morocco and largely consists of two old medina (old city) quarters, Fez el Bali and Fez Jdid. The Medina of Fez is considered one of the most extensive and best conserved historic towns in the Arab-Muslim world. It was founded in the 9th Century AD at around the same time that Islam arrived in Morocco The medina of Fez is listed as a UNESCO World Heritage site and is one of the world's largest urban pedestrian zones. It contains the University of Al Quaraouiyine which was founded in 859 AD and is the oldest continuously functioning university in the world. Fez has been called the "Mecca of the West" and the "Athens of Africa”. Fez el-Bali is also the site of the Mausoleum of Moulay Idris II, an important religious and cultural site. Fez el-Jdid is the site of the enormous Royal Palace, still used by the King of Morocco today. On Morocco vacations, you will see men sitting on stools making copper pots and workers in front of large looms. 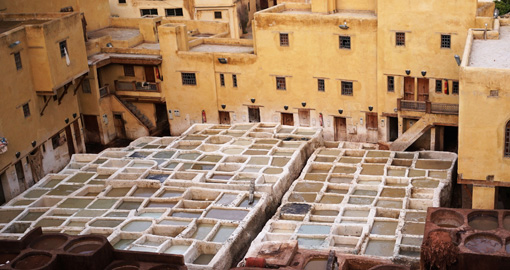 Chouara Tannery is one of the three tanneries in Fez. Built-in the 11th Century AD, it is the largest tannery in the city and is located in the Fez el Bali, the oldest medina quarter. The tanning industry has been continually operating in the same fashion as it did in the early centuries and is considered one of the main tourist attractions. The tanneries are packed with round stone vessels filled with dye or white liquids for softening the hides. Hides of cows, sheep, goats and camels are processed here by soaking into the vessels. The leather goods produced in the tanneries are exported around the world. After the dyeing process, they are dried in the sun. The hides produce high-quality leather goods such as bags, coats, shoes and slippers. The production process consists of manual labour and involves no modern machinery. This has been going on since the medieval era. Leather shops offer everything from Moroccan backless slippers to copies of designer jackets and purses at a fraction of the usual price. 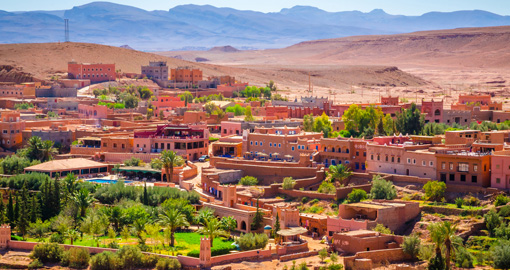 The Berbers are a people indigenous to North Africa west of the Nile Valley. They have a rich cultural history that dates back to prehistoric times, over 4000 years ago. Their influence affected commerce on trading routes between the Sub-Saharan region to the northern Moroccan cities. Today, it is still possible to still find many traditional Berber settlements in the mountains of Morocco. Although the Berber people do not live exclusively in rural settlements, these communities offer an interesting insight into the Berber tradition and history. A guided visit to a traditional Berber Village on trips to Morocco is a unique experience. Tours can be taken from Marrakesh. On arrival, you will see homes carved into the hillside with the backdrop of the majestic Atlas Mountains behind them. The Berber people are renowned for their hospitality and you are invited into a small home and offered to share a glass of Moroccan mint tea. Afterwards, you can ask your hosts any questions about Berber life.

Stay in a Riad, Marrakesh 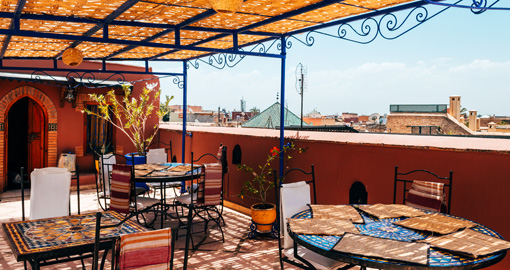 Staying in a riad in the old medina of Marrakech is a unique experience. The word riad means garden but it is applied to townhouses. This is one way in which to immerse yourself in the local ambience. Most properties are old and are furnished in the traditional style. They generally have less than 10 rooms and are built around an open courtyard with trees/ plants and a water feature (small pool or fountain or both) and usually have a rooftop terrace. They offer peace, calm and tranquility which contrasts with the rest of Marrakesh. You can sip tea by the fire, have a typical Moroccan dinner in the dining room or simply relax on the terrace. The windows in the rooms will open up to the courtyard instead of outside. And will be individually furnished. Each room will have its own unique features and personality with its woodwork and detailed paintings. 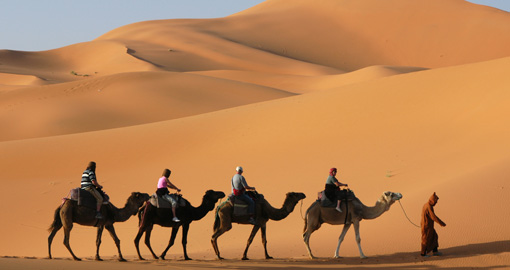 From Fez, you can join a tour on Morocco vacations for an overnight stay in the Sahara Desert in the Middle Atlas Mountains. You sleep in a tent among the sand dunes while enjoying activities such as riding a camel, horse riding, quad biking, and sand boarding You will have dinner under the stars and then retire to your Berber tent. In the morning, you can watch the sunrise over the desert. Beware that the desert can be cold at night.