Things to Do In India

Every country has its outstanding and special attractions. Goway has selected its Top 14 things to do in India (not in any particular order) for you to enjoy on your visit to this destination. 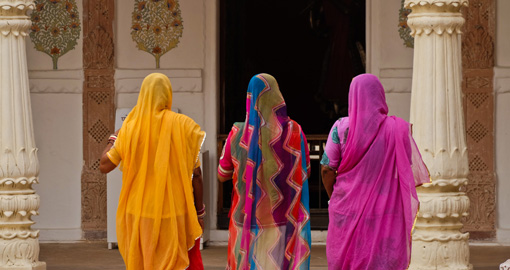 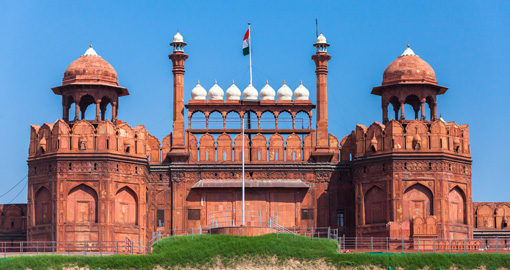 The Red Fort is a historic fort constructed in 1639 by the Emperor Shah Jahan and was the principal residence of the emperors of the Mughal dynasty for nearly 200 years until 1856 and houses a number of museums. It is made of red sandstone and measures 3 kilometres/2 miles around its perimeter. The high walls were designed to keep out invaders. The imperial apartments consist of a row of pavilions, connected by a water channel. The vaulted arcade leads to a treasure trove of buildings such as the Drum House, the Hall of Public Audiences, the white marble Hall of Private Audiences, the Pearl Mosque, the Royal Baths and the Palace of Colour. In the evening, on India tours, a sound and light show re-creates events in India's history connected with the fort. 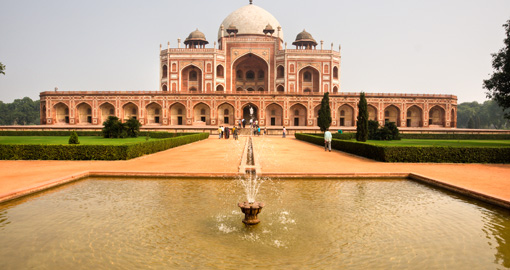 This was built by the wife of Humayun, a Mughal emperor in the mid 16th Century nine years after his death. and is considered to be the predecessor of the Taj Mahal. A century after its construction, Humayun’s tomb inspired the construction of the more famous Taj Mahal. The structure is one of the best examples of Mughal architecture and the tomb is strongly influenced by Persian architecture. Humayun and his wife are buried in the red and white sandstone, black and yellow marble tomb. The garden, divided in four main parts by walkways or flowing water, is created to resemble the paradise garden described in the Koran. From the 17th to the 19th Centuries, the garden was gradually filled with the tombs of Humayun’s descendants and his entourage. Several other Mughal emperors are buried inside Humayun’s mausoleum. Nowhere else in India contains such a high number of tombs of the Mughal emperors and their relatives. 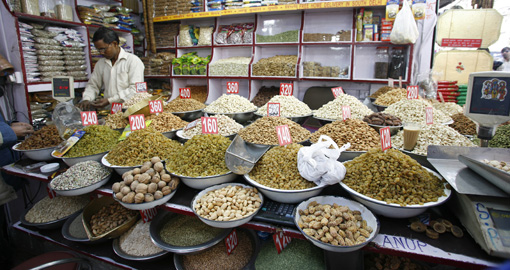 Chandni Chowk (which means Moonlight Square) is one of the oldest and busiest markets in Old Delhi. India. The market was once divided by canals to reflect moonlight and remains one of India’s largest wholesale markets. Chandni Chowk’s speciality is its variety of merchandise and other commodities such as food, books, clothing, electronic and consumer goods, shoes and leather goods. Located at the western end of Chandni Chowk is a street entirely dedicated to all kinds of spices, dried fruits, nuts and herbs. This densely populated market has been around for more than three centuries. On a trip to India, you can buy curios and souvenirs here. Even if not shopping here, it is a sight worth seeing and is a typical example of hectic and lively everyday Indian activity. 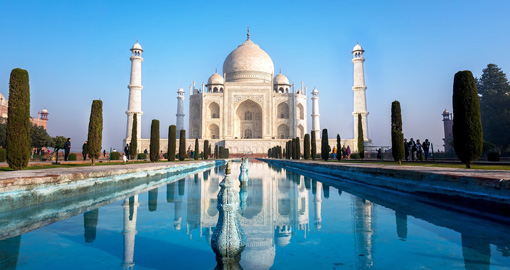 The Taj Mahal in Agra is a tribute to love and beauty and is easily the most identified as the most important buildings in India. It was built between 1631 and 1648 by Emperor Shah Jahan for his beloved wife who died giving birth. It took 22 years and 20,000 workmen to complete. It is regarded by many as the best example of Mughal architecture and a symbol of India's rich history. It is carved out of white marble and is an outstandingly beautiful structure. It not only changes colour according to the time of the day but also with every change in the season. The semi-precious inlaid stones reflect the glow of the moon. It is on a full moon night that the silvery brilliance of the Taj Mahal is shown. Dawn and dusk are especially attractive times to view the Taj on India tours. It is not a palace or a temple or a mosque. It is simply a monument which houses the tombs of Shah Jahan and his wife. The Taj Mahal is surrounded by landscaped formal gardens. 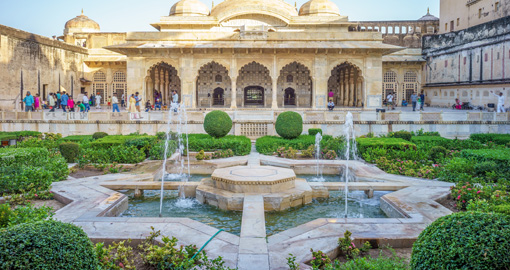 The Amber Fort is situated on a hill just outside of Jaipur and is reached from below either on foot or more easily on the back of an elephant or in a jeep. While many of the early structures have either disappeared or been destroyed, those dating from the 16th Century onwards are in a remarkable state of preservation. The palace was the residence of the Rajput Maharajas and their families. Upon arrival at the Amber Fort, visitors are faced with two flights of steps, one leading to the Shila Mata with its enshrined image of a goddess and the other to the main palace complex which is divided into four main sections, each with its own courtyard. Once inside the latter, there are a number of rooms with artifacts from the past as well as a perfectly landscaped garden. Looking either through the windows or from the terrace, there are amazing views of the surrounding countryside. 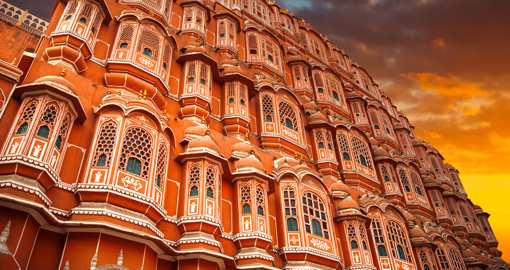 Built in 1799, the Hawa Mahal, also known as the Palace of Winds, is one of the Jaipur’s major landmarks although it is actually little more than a facade. This five-storey building, which looks out over the main street of the old city, is a stunning example of Rajput artistry with its 953 pink, delicately honeycombed sandstone windows. It was originally built to allow the women of the royal household to watch the everyday life and processions in Jaipur. Most people, on trips to India, come here to see the beautiful facade but you can also climb to the top for a view of the city below or look through the latticed windows to experience what the ladies used to see.

The Gateway of India, Mumbai 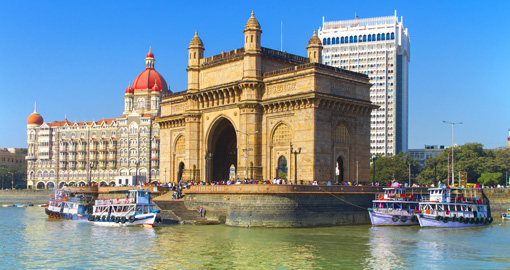 The Gateway of India is an arch monument which was built during the 20th Century to commemorate the landing of King George V and Queen Mary on their visit to India in 1911. It is 26 metres/85 feet tall and completed in 1924. The Gateway was later used as a symbolic ceremonial entrance to India for Viceroys and the new Governors of Mumbai. It is located on the waterfront at the Apollo Bunder area and overlooks the Arabian Sea. It has been referred to as the Taj Mahal of Mumbai and is the city's top tourist attraction. Today, it serves as a memento of British Colonial rule over India. 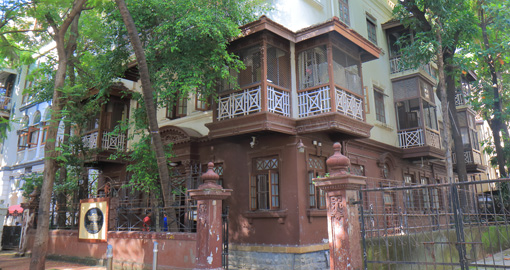 This was Mahatma Gandhi's Mumbai home and headquarters for around 17 years from 1917 to 1934. In 1955, the building became a memorial to Gandhi. Today, it is open to visitors. Inside is a library with a statue of Gandhi where people offer tributes. A staircase is dotted with Gandhi's pictures depicting his life and leads to the first floor which has a photo gallery with photographs from his childhood up to his assassination, along with press clippings. The room that Gandhi used during his stays there is on the second floor where, through a glass partition, you can see two of his spinning wheels, a book and his bed on the floor. 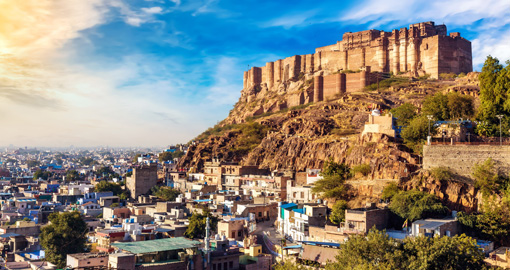 The Mehrangarh Fort, built around 1460, is perched on a 150 metre/490 foot high hill and is the most remarkable and magnificent fort in Rajasthan as well as being one of the largest forts in India. It is enclosed by imposing thick walls and inside, there are several palaces known for their intricate carvings and expansive courtyards. Battle scars of a cannonball hit by attacking armies from Jaipur can still be seen. The museum in the Mehrangarh Fort is one of the best museums in Rajasthan. In one section of the fort museum, there is a selection of old royal palanquins (a type of sedan chair), costumes, paintings and decorated period rooms. The views from the fort of the city and surrounds are spectacular. 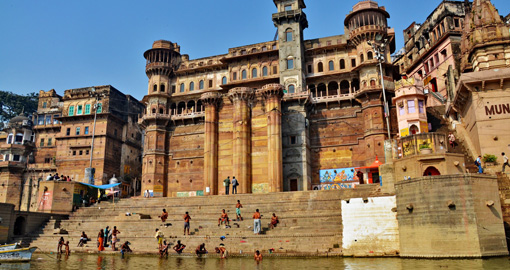 Ghats are riverfront steps leading to the banks of the River Ganges. Varanasi has 88 Ghats. Most of the Ghats are for bathing and ceremonies while two Ghats are used exclusively as cremation sites. Hindu worshippers flock to these Ghats every day to bathe in the holy River Ganges believing that the muddy waters of the Ganges will wash away all the accumulated sins of their life. Huge crowds of pilgrims gather to take part in an ancient ritual which involves making offerings to the rising sun. The oil lamps and flowers set afloat on theriver at dusk make a fascinating sight. Morning boat rides on the Ganges across the Ghats is a popular visitors’ attraction when on India trips.

The Backwaters of Kerala 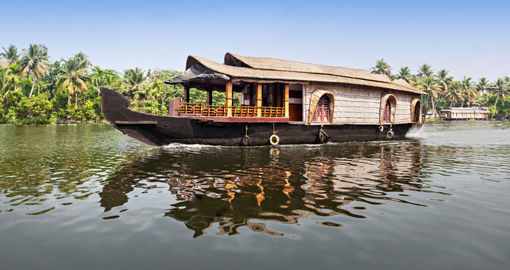 The Backwaters of Kerala is a network of 1500 kilometres/900 miles of canals, both manmade and natural, 38 rivers and 5 large lakes which extend from one end of Kerala to the other. The Backwaters can be explored by renting a boat for one or several days. If you sail for more than a day, the boat usually comes with a navigator and a cook. Boats vary in style and run to luxurious houseboats. This network of lagoons, lakes, canals, estuaries and deltas flows into the Arabian Sea. The backwaters are one of the largest fresh-water sources and rich in marine life as well being known for its natural beauty. The most beautiful and accessible part of the Backwaters is Ashtamudi Lake, the second biggest in Kerala. It is home to several endangered marine species and has a rich bio-diversity. Another attraction is the views of everyday life as you sail by typical, authentic local villages. 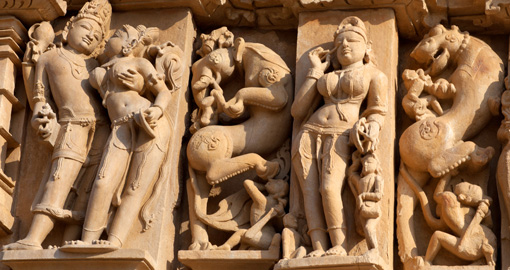 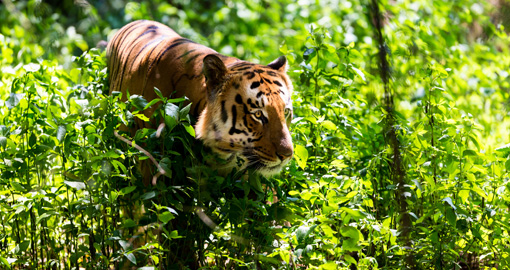 The Jim Corbett National Park is the oldest national park in India and was established in 1936 to protect the endangered Bengal tiger. it was named after Jim Corbett who played a key role in its establishment. Visitation is only allowed in selected areas of Corbett Tiger Reserve so that people get an opportunity to see its beautiful landscape and the diverse wildlife. Dense, moist deciduous forest covers almost 73% of the park and 10% of the area consists of grasslands. There are around 110 tree species, 50 species of mammals, 580 bird species and 25 reptile species. Bengal tigers, although plentiful, are not easily spotted due to the foliage which provides camouflage in the reserve. The tigers in the park have been known to kill much larger animals such as buffalo and even elephant for food. Leopards are found in hilly areas but may also venture into the low land jungles. In the summer, Indian elephants can be seen in herds of several hundred. 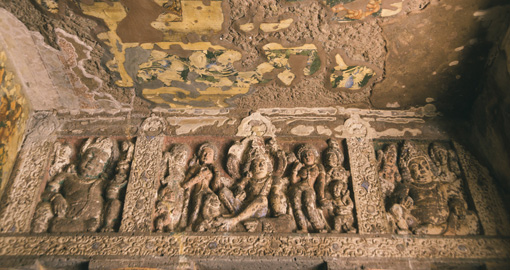 The Ajanta Caves are 29 rock-cut Buddhist cave monuments which date from the 2nd Century BC to about 480 AD near Aurangabad. The caves include paintings and rock cut sculptures of Buddhist deities described as among the finest surviving examples of ancient Indian art. The caves also present paintings depicting the past lives and rebirths of the Buddha. These are masterpieces of Buddhist religious art that influenced Indian art later on. The Ajanta Caves are a UNESCO World Heritage site.

The Ellora Caves contain Hindu, Jain as well as Buddhist caves, dating from a period similar to Ajanta. Ellora is one of the largest rock-cut monastery-temple cave complexes in the world, and, again, a UNESCO World Heritage site, featuring Buddhist, Hindu and Jain monuments, with artwork, dating from 600 to 1000 BC. One cave in particular features the largest single monolithic rock excavation in the world, the Kailasha temple, a chariot shaped monument dedicated to Shiva. The Kailasha temple excavation also features the gods, goddesses and mythologies found in Vaishnavism. There are over 100 caves at the site, 34 of which are open to the public. These consist of 12 Buddhist, 17 Hindu and 5 Jain caves. Each group represents deities and mythologies that were prevalent in the 1st millennium BC. They were built to illustrate the religious harmony that existed in ancient India.