Things to do in Vietnam

Every country has its outstanding and special attractions. Goway has selected its Top 14 things to do in Vietnam (not in any particular order) for you to enjoy on your visit to this destination. 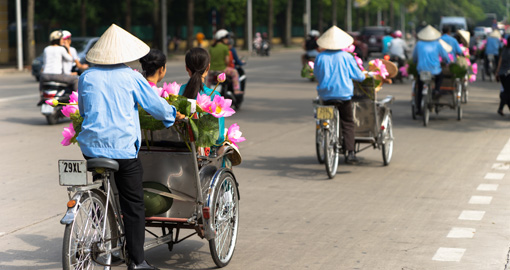 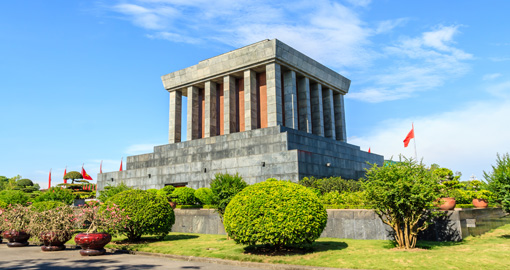 The Ho Chi Minh Mausoleum is where the embalmed body of Vietnam’s Revolutionary leader Ho Chi Minh is located protected by a military guard of honour. It is also known as the Ba Đình Mausoleum and, while on a Vietnam vacation, is open to the public. It was inspired by Lenin's Mausoleum in Moscow. Inscribed on the outside is the slogan "Long live The Socialist Republic of Viet Nam"). Talking, putting your hand in your pockets and photography are strictly prohibited in the mausoleum. A spectacle is the changing of the guard outside. Nearby is the Ho Chi Minh Museum which is dedicated to the life of the founder of modern Vietnam with photographs and official documents. 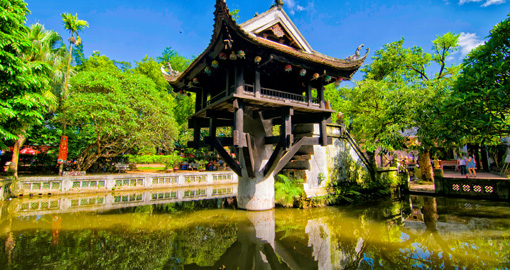 The Old Quarter is the historic district of Hanoi and used to be a residential and commercial centre during Imperial times where each of its 36 streets specialized in one specific trade or business. The crafts special to each area gave their names to the streets of the quarter such as Copperwares Street. Today, it is known for its small shops, markets and small bars and eateries. Most of the houses here were built in the 18th and 19th Centuries. Also, in this district, you will find the Temple of Literature, the oldest university in Vietnam dating back to the 11th Century with its series of attractive courtyards, pavilions and statues. Another ancient site is the One Pillar Pagoda where the legend goes that the Emperor who ruled in the 11th Century dreamed he met the Goddess of Mercy who gave him a male child. When this happened, he built a pagoda to celebrate.

The Hanoi Hilton is a pseudonym for the Hoa Lo used by the French Colonists in Vietnam for political prisoners and later, by North Vietnam for U.S. Prisoners of War during the Vietnam War. During this later period, it was sarcastically known to American POWs as the Hanoi Hilton. It was demolished in the 1990’s but part of it remains a museum. The displays show the prison during the French Colonial period including a guillotine room and the quarters of the prisoners from both periods. 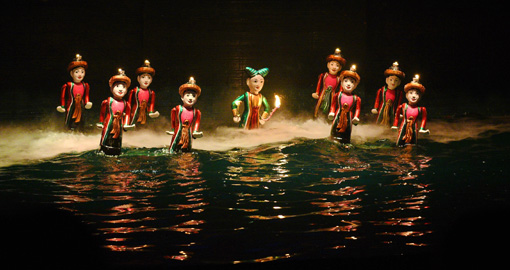 Unique on trips to Vietnam is the entertaining water puppet show, a tradition that dates back to the 11th Century. The puppets are made out of lacquered wood and the shows are performed in a waist-deep pool. The puppeteers are normally hidden behind a screen to control them and so, the puppets appear to be moving over the water. The water acts as the stage for the puppets and is a symbolic link to the rice harvest. Traditional music accompanies the show. 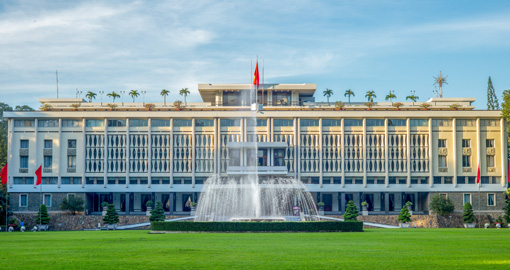 This relatively modern building in Ho Chi Minh City is associated with the fall of the city in 1975 when the first communist tanks arrived in the city. After a tank crashed through the gates, a soldier ran into the building to install a Viet Cong flag. In the late 1900’s, it was a palace and was the home and workplace of the President of South Vietnam during the Vietnam War. It t was called the Reunification Palace after the north and south of Vietnam became united. You can tour the building and view meeting rooms, the telecommunications centre, the war room. reception rooms and the president’s living quarters. 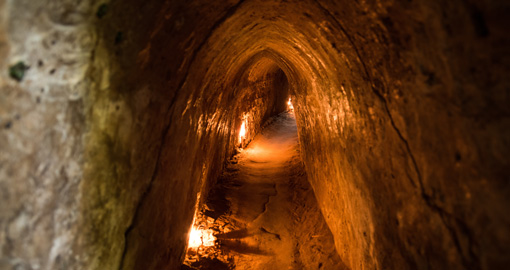 This 120 kilometre/75 mile-long complex of tunnels is a vast network of connecting underground tunnels which were the headquarters of the Viet Cong’s operations during the Vietnam War and a highlight of a Vietnam vacation. They were also used by soldiers as hiding places during combat, as well as serving as communication and supply routes. In addition, the tunnels were used as hospitals, a place to hide food and weapons as well as living quarters. The tunnel systems were very important to the Viet Cong in their resistance to American forces. Most of the time, soldiers would spend the day in the tunnels working or resting and only come out at night. Today, they have been turned into a war memorial park with two different tunnel display sites. Underground conference rooms, where campaigns were planned, have been restored 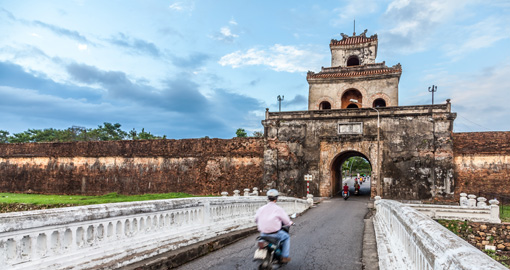 This UNESCO World Heritage site in Hue is Vietnam’s answer to the Imperial Palace in Beijing but not as grand or as extensive. It was built in the early 1800’s by the incumbent emperor of Vietnam. Thousands of workers built a wall and moat, 10 kilometres/6 miles long and then added courtyards, gardens and gates. The palace building itself, out of the original 160 buildings, only has 10 major sites remaining due to destruction during the Vietnam War. The buildings that still remain have been partially restored. The pagoda is a historic seven-story edifice and is regarded as the unofficial symbol of the city. It is located on a hill overlooking the Perfume River and was constructed in 1601 and has been destroyed and rebuilt several times. The temple contains a statue of a large marble turtle, a symbol of longevity. One of the most photographed landmarks in Vietnam is an octagonal, 27 metre/87 foot high tower; each of its seven storeys is dedicated to symbolizing different reincarnations of Buddha. The view from there to the hillside and to the Perfume River is spectacular. 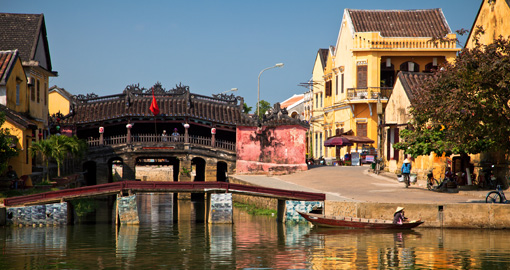 Originally Hoi An was an important trading port during the 17th and 18th Centuries and still retains much of its authentic architecture as well as having a distinct ambience with its old merchants’ houses, Chinese temples and narrow, colourful streets. It is a UNESCO World Heritage Site. The Japanese Bridge is one of the highlights and the most famous bridge in Vietnam due to its beautiful structure and graceful curves. It is 20 metres/65 feet long and connects two major streets. Not far from Hoi An is My Son, a historical site consisting of 70 architectural edifices ranging in size This is a cluster of abandoned and partially ruined Hindu temples dedicated to the worship of the god, Shiva,. It used to be the home of the Cham people who ruled from the 4th to the 15th Century. It is perhaps the longest inhabited archaeological site in Indochina even though much of its architecture was destroyed during the Vietnam War. This site can be compared to Angkor Wat in Cambodia and Borobudur in Indonesia. Dalat is an ex hill station developed by the French to escape the hot climate located in the South Central Highlands of Vietnam because of its year-round cool weather. It is dotted with attractive French Colonial villas and surrounded by farms producing strawberries, coffee and flowers. It has been described as the "City of Thousands of Pine Trees". One of the highlights here is the Hang Nga Crazy House, an outrageously designed artistic private home and described as a fairy-tale house with its sculptures representing animals, mushrooms and spider’s’ webs. There are three palaces and a summer home belonging to the last emperor of Vietnam. Not to be missed on trips to Vietnam is Halong Bay, a beautiful natural wonder dotted with 1600 limestone islands and islets which covers a large area. It is a UNESCO World Heritage site and is breathtakingly beautiful with pristine beaches, limestone caves, inland lakes and floating villages. It is enhanced by towering limestone pillars and tiny islets on top of which is forest. They dramatically rise from the emerald. Cat Ba is a beautiful national park and is home to 32 types of mammal, including most of the world's remaining golden-headed langur, the world's most endangered primate. There are good hiking trails here including tough route up to a mountain summit. Over a thousand species of plants have been recorded in the park including 118 trees and 160 plants with medicinal value. One of the best ways to enjoy Halong Bay is on board a cruise vessel for a half-day or a cruise with accommodation for 2 nights. You will sail by amazing caves and grottoes with stalactites and stalagmites. Some of these caves can be visited. Dau Go Cave is one of the most visited caves in the bay with formations in shapes of people, animals, and objects. Sapa is situated in northwest Vietnam, close to the Chinese border. It is known as a frontier town and offers breathtaking landscapes through which it is fun to hike. It is also the starting point for many climbers who want to reach the top of Fansipan Mountain, the tallest peak in Vietnam. The scenery here is spectacular with rice terraces surrounding the town. There are a number of hill-tribe people who come to Sapa to buy, sell and trade. Some of these tribes settle in Sapa but most of them live in small, close-by communities. The Sapa market, open daily, is the best place to see the local hill-tribe people Just outside Sapa are the Silver Waterfalls which have water cascading down from a height of 100 metres/325 feet. Not too far away from Ho Chi Minh City, while on a Vietnam vacation, the Mekong Delta is a lush mixture of rivers and canals that criss-cross through the region. It is a lively place with a number of small bustling towns and villages located on the banks. The mangrove forests teem with bird life. You can find numerous pagodas and Buddhist temples. To the south are off-the-coast islands with white sandy beaches. The main centre is Can Tho, the largest city in the Delta. It has a lively waterfront lined with exotic gardens where the major attraction is the floating markets. Nha Trang is located on the east coast of Vietnam and is the country’s best-known resort. It is also known for its fine sand beaches and scuba diving in its clear blue water. It is a now a popular destination for overseas visitors. The bay here is considered one of the world’s most beautiful. The local cuisine is famous for fresh seafood and the bird's nest soup is deemed one of the best in Vietnam.