Port Moresby is the capital and was named after Admiral Sir Fairfax Moresby. Other major centres are Lae, the second-largest city situated at the mouth of the Markham River; Madang, consisting of reef-fringed lowlands backed by some of the most rugged mountains in Papua New Guinea; the Eastern Highlands with its capital Goroka; Western Highlands Province with Mt. Hagen as the capital, and the Sepik River running 1,126 kilometres from source to sea, one of the world's largest waterways.

Locals are predominantly Melanesian and Papuan with some Negrito, Micronesian and Polynesian. More than 800 indigenous languages are spoken throughout P.N.G. Tok Pidgin and Hiri Motu are the two most widely used, but English is the official language in education, business and government circles.

At the 2001 census, Papua New Guinea had a population of 5,190,786, of which over 75% of households were residing in traditional dwellings, indicating that over three-quarters of the population still live a largely traditional life. There is still a considerable expatriate population of approximately 25,000. Western residents are almost always referred to as "ex-pats". The indigenous people are Papua New Guineans and are never referred to as natives. Tribal or regional names, such as Papuan, Tolai, Southern Highlander, Simbu, and Huli, are also acceptable.

First settled more than 30,000 years ago, the first recorded sighting by Europeans was in 1512 by two Portuguese explorers. Dutch explorers followed and named it New Guinea because of its similarities to Africa.

Interaction between regions has been largely restricted due to the topography of the land and the diversity of languages. Apart from areas where traders and missionaries exerted their influence, many tiny, independent villages account for most of the traditions and cultural heritage which is preserved today.

The country was divided between three nations, the Dutch, the Germans and the British towards the end of the last century. In 1905, Australia took over the British sector naming it 'The Territory of Papua' and then captured the German sector during WWI. The country became fully independent in 1975 and is now a member of the British Commonwealth with strong ties to Australia.

Animal life is as varied as its vegetation. High mountains and wide lowlands provide favourable environments for many kinds of animals. Agile wallabies are found in the savanna grasslands of the south coast, and shy forest wallabies live in the forests.

There are also slow-moving cuscuses, two kinds of echidnas, seven birdwing butterflies and bats, bandicoots, possums, gliders, and tree kangaroos. Also, more than 700 bird species including 38 of the world's 43 species of the spectacular Bird of Paradise, New Guinea eagles, and goura pigeons are to be found. There are also thousands of insects, plus more orchid species than any country in the world. 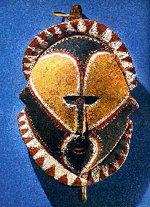 The village of Aibom, near the Chambri Lakes, is the only place on the Sepik that specializes in pottery. There is also pottery at Yabob and Bilbil villages near Madang and at Milne Bay.

There is a fascinating selection of masks, including ancestral and spirit masks which are traditionally the most important. Boys wore them with woven body shrouds or turnbuan which can also be purchased. Decorated boards are popular objects, as are boat prows, thought to be protective spirits to ward off sickness and evil.

Shields come in all shapes and sizes and are made of hiding stretched over a framework. Stools, Tables and headrests are ornate and carry intricate carvings while fishing hooks were suspended in the men's house and represented spirits which helped in fighting, hunting and warding off disease.

Skull racks for both enemies and relatives make novel souvenirs and are nicely decorated. Musical instruments, mostly hand drums, are made from wood with the skin of a snake, lizard or tree kangaroo stretched tightly over the mouth and glued to the rim with tree sap.

Finally jewelry, body ornaments and accessories are made up of a number of components including pigs' teeth, shells, orchid stems, dogs' teeth, seeds, snake spines, and pigs' tusks.

THE HIGHLANDS & THE SEPIK

The Sepik region is an immense grassland reserve, surrounded by one of the world's greatest rivers which run 1,126 km from its origins in the mountains to the sea.

The people along the river depend heavily on it for transportation, water and food. Their cultural links with the Sepik river are symbolized in many of their ancient and spiritual rituals, such as the manhood initiation. This requires the painful carving of flesh on the backs of young men with razor blades. The patterns are that of a crocodile lying on the banks of the river.

The history of the Sepik region reflects the influence over the years of the missionaries, traders, labour recruiters and administrators. Here river and crocodiles, man and nature have learned to live with mutual respect.

Parts of the Highlands remain untouched just as they were when first 'discovered' in 1933. In fact, some remote villagers have yet to see a non-Papua New Guinean.

The people are hardy and village life depends on subsistence farming. Visitors will be fascinated by the bright ochre colours and two-metre-high headdresses swathed in plumes of the Bird of Paradise worn by the tribal elders. Dancing is proud and fierce at traditional sing-sings, with drums beating long into the night.

The Eastern Highland Province is a one-hour flight north of Port Moresby or half an hour from Lae or Mount Hagen. Once there, you are surrounded by steep, rugged mountains covered in dense rainforest graduating to subalpine vegetation.

The valleys are blanketed in grass and the panoramic views contain every imaginable shade of green. The altitude varies from 600 metres in the south to Mt Michael's 2,750-metre summit.

The Sepik river has no actual river delta and stains the sea brown for up to 50 kilometres. It is said islanders off the coast can draw fresh water straight from the sea.

The Sepik is navigable for almost its entire length and winds down through the land resembling a huge, brown, coiling serpent. The force of the river tears great chunks of mud and vegetation out of the river banks and at times these drift downstream as floating islands.

West Sepik or San-daun Province is near the Irian Jaya border and is inhospitable terrain. It is home to the Upper Sepik people who move around in long, narrow dug-out canoes. Travel is always difficult as there are no roads and the rivers are narrow.

The centres are Vanimo and Amanab and villages around here have strong religious beliefs centred on deities that are believed to hold supernatural powers vital for survival in this remote and dense countryside. East Sepik is the middle and lower region from Angoram to Wewak town and there are a number of large rubber and cocoa plantations along the river flats. Wewak is an attractive palm-fringed town which felt the might of Japanese troops who 'discovered' its isolation and its hidden ports around Kairiru Island. Many war memories remain around the outskirts of the plantations and a Japanese gun still points from the eastern end of the island.

The Sepiks supply what many experts consider the best and most creative carvings which differ from village to village.

At Goway we believe that a well-informed traveller is a safer traveller. With this in mind, we have compiled an easy-to-navigate travel information section dedicated to Papua New Guinea.

Learn about the history and culture of Papua New Guinea, the must-try food and drink, and what to pack in your suitcase. Read about Papua New Guinea's nature and wildlife, weather and geography, and 'Country Quickfacts' compiled by our travel experts. Our globetrotting tips, as well as our visa and health information, will help ensure you're properly prepared for a safe and enjoyable trip. The only way you could possibly learn more is by embarking on your journey and discovering Papua New Guinea for yourself. Start exploring...book one of our Papua New Guinea tours today!

Goway's DOWNUNDER wizards offer many ways to explore, experience and enjoy amazing Papua New Guinea. There are different lodges for different regions, a stay in a Sepik riverboat as well as a luxury small vessel cruising in the region. We can also arrange adventure treks and diving experiences. Let us custom-design what will be your most amazing globetrotting journey.