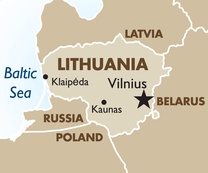 Lithuania is one of the Baltic States and is surrounded by the Baltic Sea to the west, Latvia to the north, Belarus to the east and Poland to the south-west. It has a sand dune strewn coastline, gently rolling hills, vast valleys and meandering river. It is a country with a lot of history and culture. It also has quaint historical towns and cities, interesting ancient buildings of various archaeological styles including old castles, UNESCO World Heritage Sites including some old town centres, beach resorts and many attractive National and Regional Parks.

Vilnius is located in the south eastern part of Lithuania and is the second largest city in the Baltic States. It is known for the outstanding architecture in its Old Town, declared a UNESCO World Heritage Site. Almost half of the city has attractive parks and gardens. The River Neris runs through the centre and there is a prominent hill on top of which are the ruins of an old castle.

The historical centre of Vilnius is one of the largest in Europe with nearly 1500 old buildings constructed over the centuries. These include Vilnius University, the picturesque Church of St. Johns with its bell tower and the Gates of Dawn, the only surviving gate of the first original five gates in the city wall. On Literaty Street, there are over 200 tiles and commemorative plaques to writers who have lived and worked in Vilnius plus a number of foreign writers who have shared some connection to the city.

The most impressive building is probably the Cathedral because of its size and its colour, stark white. It was built in 1387 in the Gothic style but was rebuilt in the Classical style between 1783 and 1801. Immediately opposite is the Palace of the Grand Dukes of Lithuania, a strikingly attractive building and the former diplomatic and political centre of the country. The ruins of Gediminas Castle can be reached by walking up the hill or by funicular. The views from here are wonderful.

The Museum of Genocide Victims is not for the squeamish as it is a memorial and historical exhibition of what took place during the occupation of Lithuania by the Soviets. Originally the headquarters of the Nazi Gestapo, it was taken over, in 1944, by the Soviet Secret Police (the KGB). Another informative museum is the Holocaust Museum, also known as the Jewish Museum which is dedicated to the story of the once flourishing culture and history of Lithuania’s Jewish community.

Lithuania’s second largest city is Kaunus and there is plenty to occupy the visitor from fascinating castles to the old town dating back to the 17th Century with its narrow walking streets. On the coast is the resort of Palanga which has lovely sandy beaches and is also known for its lively atmosphere and its large choice of restaurants, bars, cafes and nightlife.

Klaipeda is the oldest city in the country and is known for its many small sculptures including a mouse, guard dog, dragon, chimney sweep, post pigeons, black ghost, footprints and others. It also has an interesting old town.

The resort town of Druskininkai with its mud baths and mineral springs is a well-known spa centre. In the winter, it is a popular ski resort.

The Aukstaitija National Park is beautiful and home to some interesting wildlife including elk, deer and wild boar. It boasts 126 extremely clean lakes.

So with this wide variety of attractions, perhaps Lithuania could well be your next destination.

At Goway we believe that a well-informed traveller is a safer traveller. With this in mind, we have compiled an easy to navigate travel information section dedicated to Luithuania.

Learn about the history and culture of Lirthuania, the must-try food and drink, and what to pack in your suitcase. Read about Lithuania’s nature and wildlife, weather and geography, along with 'Country Quickfacts' compiled by our travel experts. Our globetrotting tips, as well as our visa and health information will help ensure you're properly prepared for a safe and enjoyable trip. The only way you could possibly learn more is by embarking on your journey and discovering Lithuania for yourself. Start exploring… book one of our Lithuania tours today!