DELUXE | RAIL: Ride through the heart of Africa on this incredible luxury rail journey aboard the Rovos Rail. Travelling from the Indian to the Atlantic Ocean, you’ll head on safari game drives, tour Central African cities, and enjoy the unmatched luxury of the Pride of Africa as you pass through Tanzania, Zambia, the Democratic Republic of Congo, and Angola. 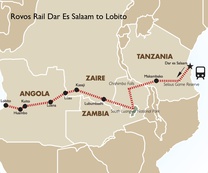 This 15-day luxury African vacation takes you from Dar es Salaam in Tanzania to Lobito in Angola, passing through Zambia and the Democratic Republic of Congo along the way. It’s a journey for the adventurous traveller who wants to experience the often-inaccessible heart of Africa without sacrificing comfort and luxury.

Your African rail journey begins in Dar es Salaam, Tanzania’s largest city. After taking in the bustling atmosphere of this busy seaport, you’ll board Rovos Rail’s Pride of Africa, a luxury train that transports globetrotters back to the golden age of train travel. The train’s classically-designed sleeping cars, attentive staff, and gourmet restaurant offer all the comforts of a 5-star hotel along with the romance of the golden age of steam locomotives. As the train only holds up to 72 passengers, you’ll know that you’ll get the intimate and attentive service that befits a luxury journey as you travel from the Indian to the Atlantic Ocean.

Your first stop aboard Pride of Africa will be Selous Game Reserve, the largest game park on the continent. You’ll head on a game drive to see the park’s unspoiled stretch of the African wilderness, where over 440 species of birds and an abundance of lions and leopards roam the savannah. It’s also likely you’ll spot some African wild dogs, as the park is home to around 50 percent of the world’s population of this endangered species. From Selous, continue on to Makambako, where you can wander the town’s giant market where the Bena people sell their wares.

Continue your luxury African vacation by passing into Zambia, where you’ll stop off at the majestic Chishimba Falls (known for their impressive 30m drop) and take a game drive through South Luangwa National Park in hopes of spotting hippos bathing in the river or elephants and giraffes crossing the plains. Cross the border into the Democratic Republic of Congo and experience a verdant nation too often overwhelmed by war and internal strife. You’ll pass into Lubumbashi, the country’s second-largest city, to take a city tour that’ll introduce you to the Congo’s vibrant culture and show off some prominent local landmarks, like the botanical garden and Art Deco Palace of Justice. Pass further into the country to tour a copper mine and learn about the Congo’s abundant natural resources. Close out your time in the Democratic Republic of Congo by passing by Kasaji and Malonga before crossing the border into Angola.

Few globetrotters ever venture into Angola, as it has severe travel restrictions and a fragile economy. Luckily, aboard Rovos Rail, you’ll gain access to this elusive country and have the chance to admire its overwhelming beauty. While in Angola, you’ll cross the Kasai River, pass by charming remote villages, and enjoy walking tours in the towns of Luau and Luena, where rebel leader Jonas Savambi was killed at the end of the Angolan Civil War in 2002. You’ll also head into the heart of the Ovimbundu Kingdom in Kuito and enjoy a final walking tour in Huamba before passing into Lobito and ending your journey across Africa.

This African rail journey aboard Rovos Rail takes you into parts of Africa that few globetrotters ever access. It’s a luxurious journey with safari game drives and visits to rarely-glimpsed cultural centres that’ll satisfy the most ardent of travellers.

Today breakfast, lunch and high tea will be taken onboard the train. Time permitting there will be a game drive in the Selous Game Reserve. Selous is the largest game park in Africa. As the train travels the Rift Valley passing the Udzungwa Mountains lunch will be served as it negotiates the tunnels, switchbacks and viaducts of the escarpment. At 16:30 tea is served in the lounge car and observation car at the rear of the train. Dinner will be served at 19:30. Overnight Mlimba.

NOTE: Please ensure that the train manager is in possession of your passports and completed forms. Remember to have a look at the Victoria Falls activity list and book any of these through the on board lecturer in time for your arrival in the Falls.
PLEASE RETARD YOUR WATCHES BY ONE HOUR BEFORE RETIRING FOR THE EVENING.

NOTE: Please pack a small overnight bag for the two-night stay at the game lodge. For your convenience we have placed bags in your suite. Please note that beverages, phone calls and laundry are for your own account.
Bottled water and a limited wine selection will be available during lunch and dinner compliments of Rovos Rail. WiFi and spa facilities available (bookings essential). Time of game drives will be confirmed on arrival.

Breakfast will be served between 07:00-9:30 in the dining car. At 10:00 disembark and transfer to Mpika Airport for a chartered flight to the South Luangwa National Park. Transfer to Mfuwe Game Lodge is at 12:00. Enjoy lunch on arrival followed by check-in. Afternoon game drive will start 15:30 in the Luangwa Valley. Dinner will be served at 19:30 and overnight at the lodge.

Wake-up call and continental breakfast is at 6:00. Early morning game drive starts at 6:30 (approximately 2 hours). At 8:30 breakfast is served at the lodge.
NOTE: Please ensure that your luggage is ready for collection at 10:00.

Transfer to Mfuwe Airport for the chartered flight to Ndola, Zambia at 10:00. Upon arrival at 12h00, transfer to Ndola Station to rejoin the train.
NOTE: Please ensure the Train Manager/Gift Shop has your passport for border formalities.

Visit to a Copper Mine

NOTE: Lectures during course of morning and/or afternoon in lounge car. Please consult Lecture Sheet for details.
PLEASE TURN YOUR WATCHES BACK AN HOUR BEFORE RETIRING FOR THE EVENING.

Breakfast is served in the dining cars from 7:00 until 9:00. Then enjoy a walking tour of Huambo, the second largest city in Angola and one of the old kingdoms on the central plateau. Depart for Lépi at 11:00. Lunch is served at 13:00 in the dining cars.

Breakfast is served in the dining cars from 7:00 until 9:30. Arrive at 10:00 to journey's end, Lobito Station, Benguela Province, Angola.

*This trip operates in the reverse direction. Please inquire for details