DELUXE | PRIVATE-GUIDED: Experience an unbeatable combination on this journey through Western China. First stop is Chengdu where you’ll see the giant pandas and do some volunteer work. Then head west to Lijiang, Shangri-La, and eventually Lhasa in Tibet to explore Tibetan Buddhism and admire a stunning backdrop of snow-capped mountains. 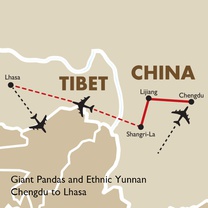 This 11-day Chinese vacation takes you to across Western China to explore Sichuan, Yunnan, and the mountain ranges of Tibet. It features deluxe class accommodations, private tours, and is great for luxury travellers who have been to China before and want to explore further afield in the country.

Your trip to China begins in Chengdu, the Sichuan capital and the world capital of giant pandas. During your time in Chengdu, you’ll head to the Chengdu Giant Panda Breeding Center to observe giant pandas in their natural habitat and learn about Chinese conservation efforts for these beloved mammals. You’ll also explore the People’s Park and the ancient streets and courtyards of Kuan Zhai Xiang Zi before attending a performance of the Sichuan Opera. While in the city, you’ll also help with conservation and upkeep at the Dujiangyan Panda Park before seeing the town’s 2,300-year-old irrigation system and exploring the Jeizi Ancient Town, with its temple dating back to the Jin Dynasty in the 3rd century AD.

Continue on to Shangri-La City, the inspiration for the famous mythical Chinese city high in the mountains. Along the way, you’ll head to Tiger Leaping Gorge, a massive canyon where you can marvel at the rugged mountains and watch the waters rush onward to the Yangtze River. Once you reach Shangri-La, you’ll get in touch with Tibetan culture at the Songzanlin Monastery, the largest Tibetan Buddhist Monastery in Yunnan, and explore China’s first national Park at Bitahai Lake and Shudhu Lake.

The final stop on your journey through Western China is Lhasa, the capital of Tibet and a stunning city set against a backdrop of mountain ranges. You’ll have a day to explore Lhasa at leisure before spending the rest of your time journeying to the most significant sites in Tibetan Buddhism. You’ll head to Potala Palace, the massive winter home of the Dalai Lama that sits atop the town and stuns anyone who sees it with its red-and-white brick façade that blends into the rock. You’ll also explore Norbulingka Palace, which used to house the Dalai Lama in summer, as well as Drepung Monastery and Sera Monastery, with its massive hall filled with the sounds of monks chanting the sutras.

At the end of your stay, head to the airport to continue your onward journey.

Arrive Chengdu, transfer to your hotel for check-in. Remainder of the day is free at leisure.

Morning visit the Chengdu Giant Panda Breeding Centre beautifully landscaped with lush plants and lakes. Meet with 20 some pandas and their caregivers. The highlight is the see the panda cubs at the kindergarten where they play with each other, climbing up and down trees, rolling and pushing and kicking like Kungfu masters. Also, visit the Small Red Panda Center with 40 small pandas in residence who roam freely.

After lunch, visit People's Park with its Bonsai Garden, the park also where throngs of locals gather to practice Taiji, fly kites, or do synchronized dance. Then head to KuanZhai Xiang Zi, the major buildings in this site are courtyards and ancient style streets, wander the surrounding area, immersing in traditional shops and local activities.

Morning dive to Dujiangyan Panda Park with Panda Volunteer Work. Visit the Panda Centre and have a Panda Volunteer Work: All the volunteers are offered overalls and gloves. Before work, all the volunteers will be given job safety training and introduction of the job content, clean the residual bamboo and their feces, observe giant pandas' living environment and state, wash panda's house, feed the giant pandas with the delicious specially prepared "steamed bun" and fruits and watch some science video about giant pandas to know how the human protect giant pandas and live in harmony with pandas.

Optional - Taking a photo with a panda side by side

After lunch at a local restaurant, afternoon visit the ancient Dujiangyan Irrigation System which is the great technological achievement of ancient China. For more than 2,300 years of irrigation, Dujiangyan has benefited the local people just as it prevents Min River basin from annual flooding and made the ancient Shu State a famed 'land of abundance'. This system still plays an indispensable function in agriculture.

And walk along the Jiezi Ancient Town, it includes 32 temples and a great number of other historical sites. It features an ancient temple which could be traced back to Jin Dynasty, primitive forests, an age-old gingko trees and Nan trees, an ancient stone pagoda and a well preserved ancient street. The town is a good combination of natural scenery and artificial designs.

Transfer to morning flight flying to Lijiang. Arrive Lijiang, transfer to your hotel for check-in.

After lunch at local restaurant, afternoon visit the Dayan Ancient Town with long history and profound Naxi culture. Ancient water-supply system is effective function in the ancient town, and rivers flows along every house. Ubiquitous mini bridge is the biggest feature there.

Evening is free at leisure with dinner is on own.

Enjoy the spectacle of Impression Lijiang - Snow Mountain, an outdoor audio-visual extravaganza directed by the internationally acclaimed, Zhang Yimou who directed the 2008 Beijing Olympics Opening Ceremonies and whose films have been nominated for Oscars several times. Over 500 local people from 10 different ethnic groups selected from 16 towns and villages around Lijiang perform rituals, dances and folk songs for visitors daily, weather permitting, against the enchanting scenery as a backdrop. This is truly a special treat for the eyes and ears.

After lunch, head to Baisha village, a small village in the magnificent Jade Dragon Snow Mountain range and is the original settlement of the Naxi people who came to the greater Lijiang Valley a thousand years ago. In nearby Dongba Culture Village you will learn about the local Naxi people, and their culture including a visit to the home of a local Naxi family for a unique perspective into their daily lives. You will also visit the former residence of Dr. Rock a 20th century Austrian-American explorer-botanist and author of two English-language histories of the Naxi people.

Enjoy the free evening with dinner on your own.

Drive to Shangri-la, en route, explore the Tiger Leaping Gorge which is a scenic canyon on the Jinsha River, a primary tributary of the upper Yangtze River. At a maximum depth of approximately 3,790 meters (12,434 feet) from river to mountain peak, Tiger Leaping Gorge is one of the deepest and most spectacular river canyons in the world. The inhabitants of the gorge are primarily the indigenous Naxi people, who live in a handful of small hamlets. Their primary subsistence comes from grain production and hikers.

Arrive Shangri-la, transfer to hotel for check-in.
Evening is free at leisure with dinner on own.

Explore the Songzanlin Monastery which is the largest Tibetan Buddhism monastery in Yunnan Province. Covering an area of 30 hectares, it looks like a mini Kumbum Monastery. Today the monastery once again houses more than 700 monks and lamas.

Take a Tibetan family visit to local resident home and you will learn about a local family's history and way of life. After lunch, visit the Pudacuo National Park which is the first national park in mainland China. Bitahai Lake and Shuduhu Lake are two major parts of the park. Besides these two lakes, forest, marsh, valley, alpine meadow and so on can be seen in the park. All major spots are connected by footpath which offers a closer distance for travelers to experience the natural environment.

Transfer to airport for morning flight to Lhasa. Upon arrival at Lhasa, transfer to your hotel for check-in. Remainder of the day is free at leisure and adapt to the high altitude.

Morning explore the world wonder and pilgrimage site, The Potala Palace, it has stood for centuries as a testament to the Tibetan people and their beliefs. Thousands of pilgrims from around the world come every year to pay homage to this grand estate and the symbol it stands for. This amazing palace has the honor of being the highest ancient palace in the world, with its highest point reaching 3,750 meters (12,300 feet) above sea level, towering 100 meters (300 feet) above the city of Lhasa. It was built as the center of Tibetan government by the fifth Dalai Lama in 1645.

Explore the Jokhang Temple, stores a golden statue of life-sized Sakyamuni, which was brought by Princess Wencheng of the Tang Dynasty. This statue is considered as Sakyamuni himself, so the Jokhang Temple is the most holy temple for Buddhists. Watch religious pilgrims prostrating themselves at the front gate. Join local people's kora (circle for religion) and stroll around Barkhor Street where you may shop for Tibetan items.

Morning visit Norbulingka Palace, which has plenty of plants and is full of oxygen. Here you can appreciate the beautiful gardens and see some local people going about their daily lives. This was the summer palace of the Dalai Lamas, and now it has become a public park. Local people love to come here to chat and stroll.

Explore Drepung Monastery. This used to be the living quarters of the Dalai Lamas before the reconstruction of Potala. The huge Shoton Festival is held here at the beginning of August every year.

Afternoon visit Sera Monastery, comprising a great sutra-chanting hall, a college and 32 sections.Watch the monks' debate and enjoy their special "dance" (it's from 3:00pm to 4:30pm &amp; not available for Sunday). Debate is a way for the monks to learn sutras and scriptures. Sera Monastery opens its debates to the public so you'll have a chance to witness how monks debate.

Transfer to airport for flight to Chengdu, and then connect your onward flight.

Goway will assist in obtaining your Tibet entry permit, but this permit is never guaranteed and subject to change. It is usually not possible to get a Tibet Entry permit between March-Apr 10, May 01-05, and Oct 01-10.