FIRST-CLASS | PRIVATE-GUIDED: Travelling through the heart of Malaysia, discover why it's the highlight of many Asia tours. You'll travel from Singapore to Kuala Lumpur, enjoying the varied and colourful countryside, plus the local highlights of Southern Malaysia. 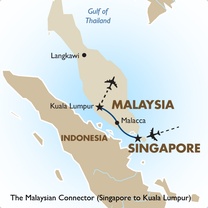 If you happen to be travelling from Singapore to Kuala Lumpur, why not add a tour through Malaysia? Malaysia includes modern cities, first rate beach resorts, lush jungles, verdant rainforests and numerous National Parks. The influences of the ethnic mix also add to Malaysia’s attraction with its Malay, Chinese and Indian cultures.

Set off by overland vehicle from Singapore, cross the causeway into Malaysia and travel through rural areas with views of plantations and small villages en route to your first stop, Malacca. Start with a tour of the city which includes the Cheng Hoon Temple built in 1685 and the oldest functioning temple in Malaysia combining Taoism, Confucianism and Buddhism, the Kampong Kling Mosque with its interesting architectural style, the Baba and Nonya Museum, a showcase for the local history of ethnic Chinese Malays and the Porta de Santiago, the remains of a Portuguese fortress. There will be time to visit Jonkers Street with its decorated houses and antique stores. Overnight in Malacca.

The next day, continue by overland vehicle to the capital, Kuala Lumpur. On arrival, your tour of the city includes the King’s Palace, an impressive white building standing in its own grounds, the National Mosque, the interestingly designed main Railway Station, the National Monument dedicated to those who fell during World War Two, the Sultan Abdul Samad Building, a major architectural landmark, China town and the Seri Mahamariaman Temple, the oldest Hindu temple.

The next day continue your sightseeing in Kuala Lumpur visiting a pewter factory and the BatuCaves, a series of cave temples and a sacred Hindu shrine. The remainder of the day is at leisure to enjoy the capital.

The following day your tour concludes.

Meet at your hotel in Singapore at 08:00am and depart to Malacca with 1 stop in Johor Bahru to change vehicle. Continue the journey with estimated arrival time around noon, tour of the historic sites such as Cheng Hoon Teng Temple - the oldest functioning Chinese temple in Malaysia, Kampung Kling Mosque, Jonker Street (Antique Row), Baba &amp; Nyonya Museum, Stadhuy's Building, Malacca Clock Tower, Christchurch and the famous Porta de Santiago.

Breakfast at hotel and check out.

Depart your hotel by 8:30am to leave for Kuala Lampur, Malaysia's capital city. Upon arrival you will be given a tour of the King's Palace, National Mosque and Railway Station, National Monument, Independence Square, Sultan Abdul Samad building, Selangor Club, St. Mary's Church and the world's tallest free-standing flagpole. The tour resumes for a visit to the Seri Mahamariaman Temple and the colourful Chinatown for bargain hunting.

Before checking into your hotel, visit the tallest Communication Tower in South East Asia for a stunning panoramic view of the city and the Petronas Twin Tower, the highest twin tower in the world.

This tour brings you to the outskirt of Kuala Lumpur city. Firstly, you will visit the well-known Royal Selangor Pewter factory, which is the largest in the world. Here, you will get a brief tour around the factory in which you will not only learn about its history, but you will also be given a demonstration of some of the many processes of a pewter product such as casting, filling, polishing and hammering. Thereafter, there will be a brief stop at the Batik Centre, were you will discover how the popular Malaysian fabric is designed and printed. The last part of the tour will be the most exciting, as you will then proceed to the Batu Caves. This world famous limestone outcrop houses a Hindu temple and is visited by thousands of pilgrims and tourists every year. Before climbing up the 272 stairs in order to reach the main cave temple, you will have a chance to admire the impressive golden structure of the 140 feet tall statue of Hindu God Lord Murugan located at the entrance. Once reached the top you will not only be greeted by several cheeky monkeys, but you will also have a great view of the beautiful skyline of Kuala Lumpur. The rest of the day is at your leisure.

Note: Tour not available for 3 days on Thaipusam Festival (Eve of the festival, festival day and one day after the festival).

At noon, transfer to Kuala Lumpur International Airport for your onward flight.