The official of the Czech Republic (Czechia) is the Czech Crown (Koruna), even though the country is a member of the European Union. Euros are not commonly accepted, so be sure to have some crowns on hand. ATMs are common and credit cards are accepted at many restaurants and hotels in the larger cities.

The official language in the Czech Republic is Czech, with an estimated 98% of all citizens in the country speaking Czech. While tourism professionals and some people in the larger cities will understand English, it’s not common.

The climate in the Czech Republic is very typical of the rest of Europe, with warm, dry summers and cold winters. Temperatures in the winter typically hover around 2°C–9°C/36°F–48°F. Spring (March to May) brings a temperate climate with almost no rain and sunny days, with temperatures typically averaging 9°C–20°C/48°F–68°F. In the summer, temperatures are warm and it can be humid, usually ranging from 24°C–26°C/75°F–78°F. Fall brings comfortable touring temperatures that range from 13°C–24°C/55°F–17°F.

The Czech Republic is especially fascinating for travellers interested in history, particularly the fall of communism in 1989 and how the Czech Republic has evolved since that time. Prague is one of the most attractive cities in Europe, with plenty to attract history buffs, foodies, and cultural travellers. Combining castles and chateaus, history and tradition, music and the love of food and of course beer, the Czech Republic appeals to most travellers. 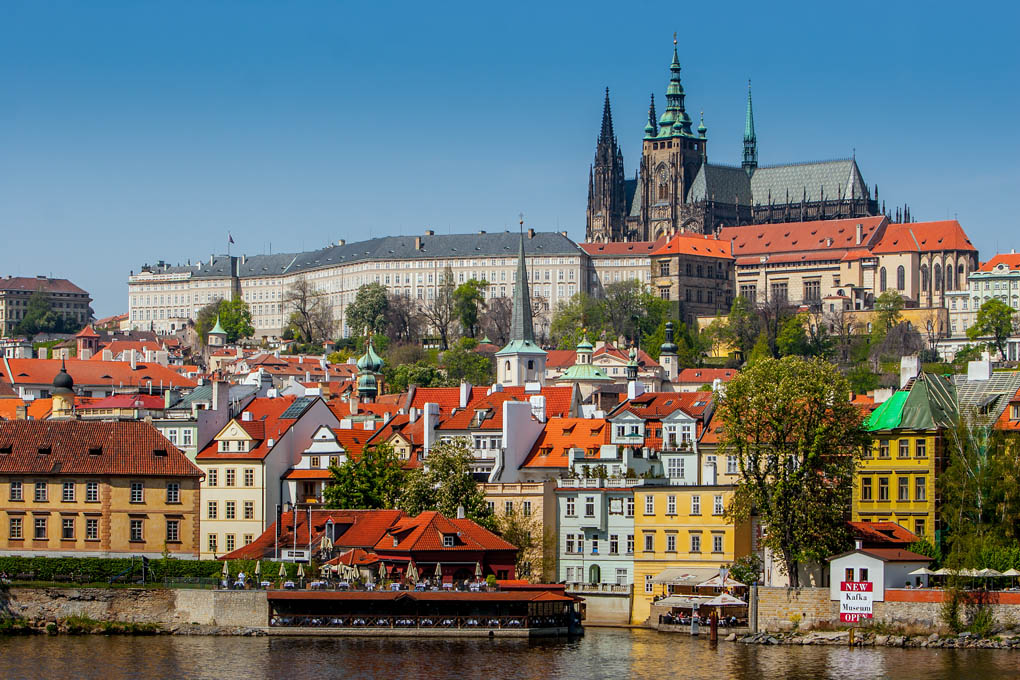 There are five airports in the Czech Republic, but there is only one used for flights that arrive from North America: Prague Vaclav Havel Airport. It serves more than 12 million passengers annually. It is about 10km/6mi from the Prague city centre. Brno Airport is significantly smaller and provides many connections within Europe, especially during the summer holiday season.

There are no direct routes from the United States to the Czech Republic. Travellers will need to connect through one of the major airports in Europe, such as London Heathrow, Amsterdam, and Frankfurt.

There are no direct flights from Canada to the Czech Republic. Canadian flights connect through one of the major cities in Europe, such as London or Frankfurt. 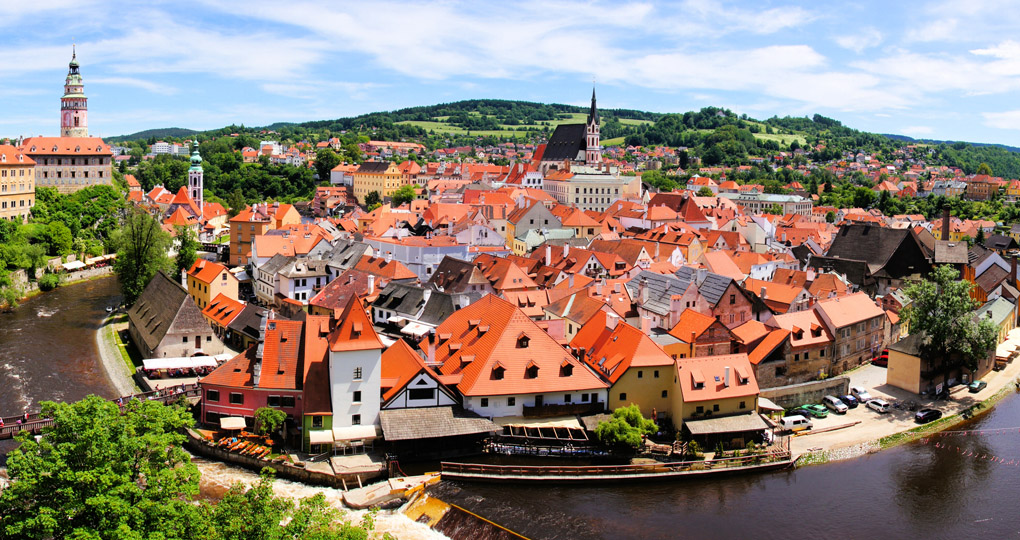 Prague is the historical capital of Bohemia and the capital of the Czech Republic. Since the fall of communism in 1989, the city has become one of Europe’s trendiest cities. The Old Town, with its ancient chapels and cobblestone streets, historic buildings and museums, is spectacular. Culture is at the heart of the city, with the musical influences of Mozart and other classical composers to the modern urban street art around the city keeping the atmosphere vibrant.

Cesky Krumlov is about four hours from Prague and can easily be visited on a day tour. Cesky Krumlov Castle sits above the town and the Vltava River, and is the second largest castle in Europe, spanning 40 buildings and palaces over seven hectares. The town itself has a unique charm and is full of colourful houses that survived destruction in World War II.

Plzen (Pilsen) is the industrial beer capital of Wehstern Bohemia. It is the home of Pilsner lager, which was first created here in 1842. There are beer trails that pass through 14 of the best known breweries in the region, providing opportunities to learn about this centuries-old practice.

Kutna Hora, which means “The City of Silver,” earned its name from the silver mines that were established here in the 13th century. About one thrid of all silver produced in Europe came from this region. The town has remained a popular location for day trippers from Prague. Its historical attractions include the churches of St. Barbara and the Cathedral of Our Lady of Sedlac, as well as the stunning “Bone Chapel” of Sedlec Ossuary.

Other Highlights of Czech Republic Off the Beaten Path 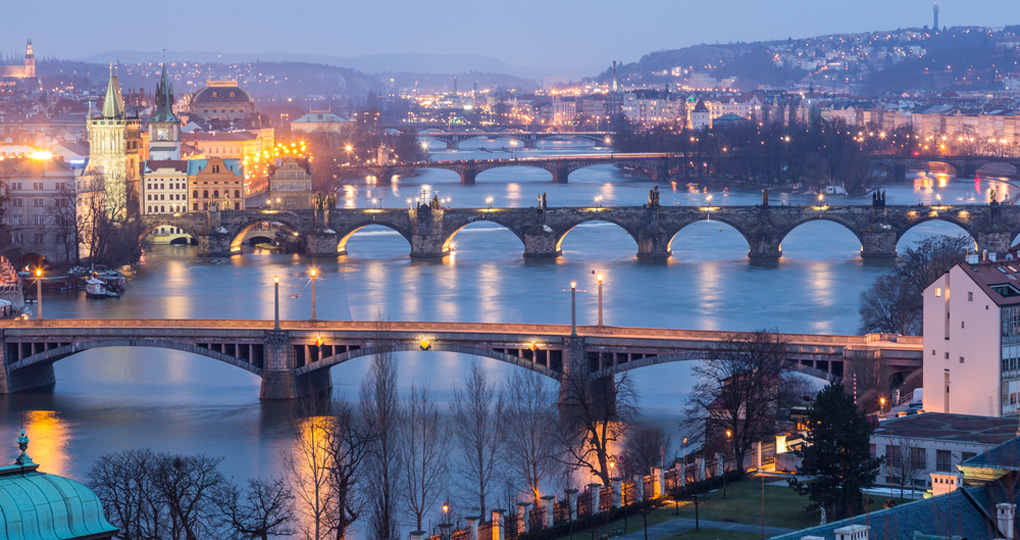 Mlada Boleslav is a historic Czech city that happens to be home to the modern European car maker Skoda. Life in the town has been influenced greatly by Skoda, which has resulted in the opening of the Skoda Auto Museum, which celebrates 100 years of uninterrupted automaking history. The town also has an old town square and the Mlada Boleslav Castle dating back to the 10th century.

The Vltava is the longest river in the Czech Republic, flowing for 430km/267mi. There are many ways to experience the beauty and history of the river. You can visit castles along the way, like Vitkov Castle or Castle Vltavou, or head to lookout points, monasteries and museums over the river. You can also arrange to kayak the river or take a boat cruise for a relaxing guided experience.

This is a perfect destination for hiking, swimming, and even golfing. The name means “Wild Sarka” after the mythical female warrior who allegedly threw herself off one of the cliffs. It is a rugged landscape of steep rocks, groves, and upland plateaux that’s great for hiking, cycling, or rock climbing.

Terezin is a small countryside town today, but it has a dark history, serving as one of the Nazis’ prisons, ghettos, and concentration camps during World War II. More than 150,000 Jewish people were imprisoned here. Tours to Terezin include visiting the monuments, memorials, and museums while learning about this tragic, dark chapter in Czech history. 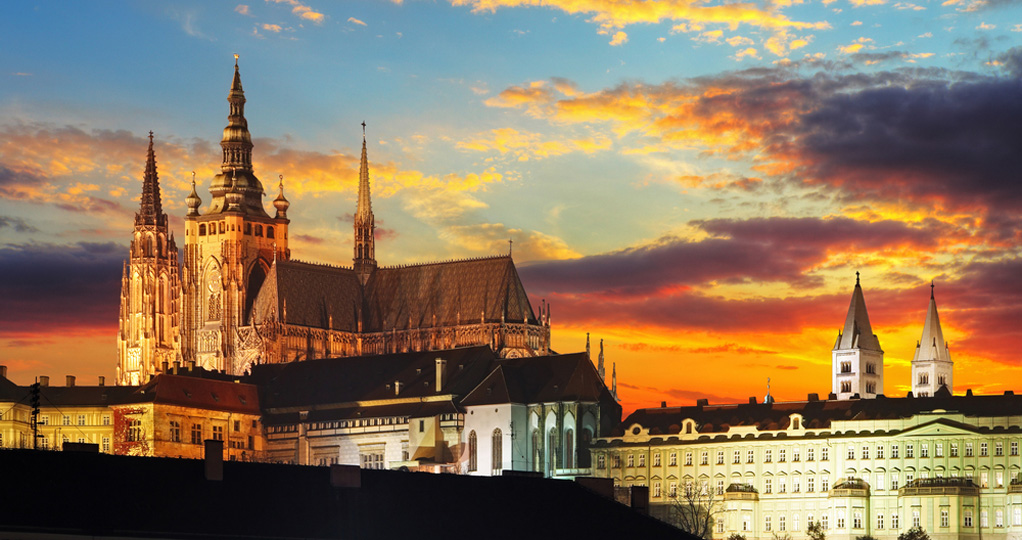 While there are many beautiful museums and galleries where the finest Czech art can be viewed, the streets of Prague are the best place to see the most current and authentic pieces of modern Czech art. Street art became popular in the 1980s as the communist era was coming to a close. Artists of the time took their creative spirit to the streets to create artworks celebrating democracy and freedom from the Eastern bloc. Today, you won’t just find street art on the walls around the city, but also sculptures and art exhibits, such as the Lennon Wall.

Prague Castle was built in the 9th century and is one of the largest castles in Europe. Over the past 11 centuries it has been under continuous development. The castle was originally home to the princess and kings of Bohemia since 1918, but today is the official residence of the president of the republic. On a tour of the castle, you’ll also find historical palaces, offices, gardens, churches, and the adorable miniature street of Golden Lane.

The tradition and cultivation of beer has a long history in the Czech Republic, so it’s no coincidence that the country has the world’s highest beer consumption per capita. The popularity of beer has resulted in Beer Spas across the country. There are several beer and wellness spas around the Czech Republic where you can bathe in beer while sitting in Royal Oak tubs, which are an eternal symbol of longevity and endurance. Drink a beer and enjoy a good soak—what’s not to like?

Located in Kutna Hora, this nondescript Gothic chapel is known as the Church of Bones due to the interior decoration of its sanctuary that incorporates more than 40,000 human skeletons. The bones were collected in the 15th century and in the 1800s, a wood carver decorated the chapel with the bones. The highlight of this macabre chapel is the chandelier, which contains at least one of every human bone. 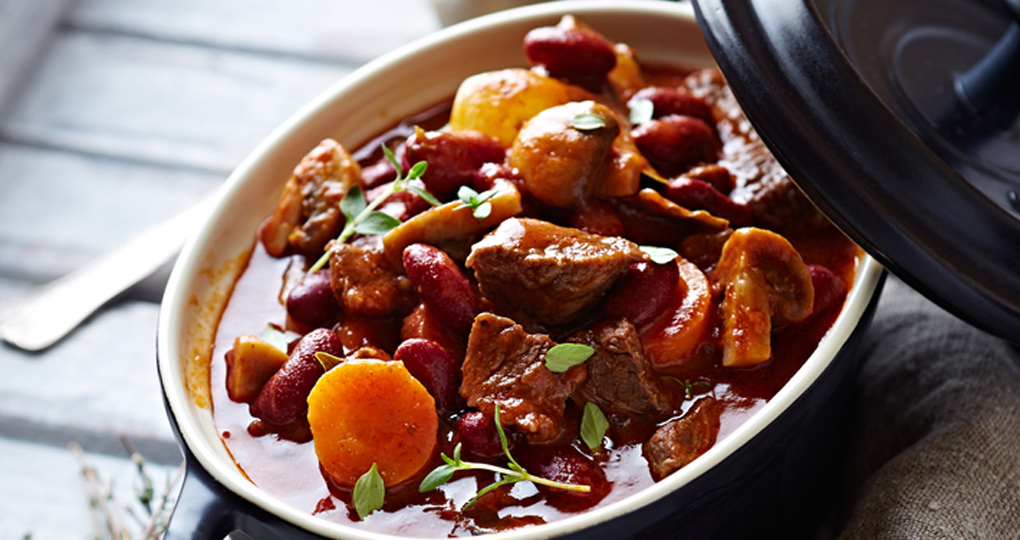 Many dishes that are traditional in the Czech Republic are central to other European countries, like schnitzel. Each national version varies according to the type of meat used, with Czech and German versions typically featuring pork unlike the Austrian schnitzel which primarily uses veal. This meat is tenderized, breaded and fried and served with traditional Czech potato salad, which is similar to the Russian-style mixture of potatoes, carrots, hard boiled eggs, onion, and pickles with mayo, mustard, and brine from the pickles.

Dating back to the early 19th century, svickova is one of the most famous Czech dishes. This hearty wintertime specialty is a marinated beef tenderloin braised in a creamy vegetable sauce. The signature of this dish is the creamy gravy made with mashed root vegetables and sour cream. It is traditionally served with soft bread dumplings, a tart cranberry sauce, and a small amount of whipped cream.

Gulas is a hearty meat stew cooked in a red sauce seasoned with paprika. This dish originated in Hungary, but has become common across the Czech Republic and Slovakia. There are slight variations between the countries versions of the dish, with Czech gulas having fewer vegetables and more meat. Gulas is normally served with bread dumplings on the side.

Chlebicky is a staple for an easy snack that can be found throughout Prague restaurants, bistros, and cafes. It is an open-faced sandwich made with a variety of toppings such as salami, other deli meats, egg, ham, and topped with pickles and cucumbers. It is served for breakfast or lunch and is great for a quick bite during your travels. 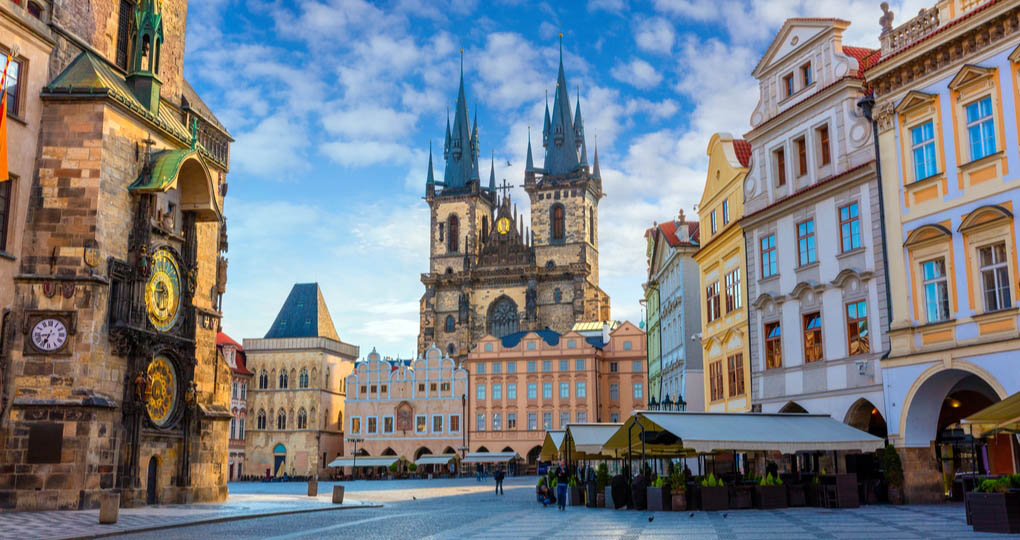 Prague is a city with a lot of see, but it is compact and easy to see by foot with good walking shoes. There is local transportation, with a well-functioning subway system, but language barriers can be an issue. When travelling it is always best to seek to find locally-owned and operated restaurants that serve locally-grown products. Supporting local artisans, shop owners, and family run hotels is also a great way to help move forward sustainability in the Czech Republic.

The Czech Republic is situated in a perfect geographic location in Europe that opens the door to travel in any direction, especially by train. Travelling north into Poland is a breeze, while to the west, both Germany and the Netherlands are easily accessed. Southward, a train will bring you into Austria or Hungary.

Most Popular Itineraries for Czech Republic

Prague & the Surrounds focuses on the highlights of the Czech capital, taking travellers around the city to its various highlights. It also includes trips to Kutna Hora to see Sedlec Ossuary and south to see Terezin and Cesky Krumlov. Highlights of Berlin, Prague, Krakow, and Warsaw pairs Prague along with some of Central Europe’s most popular cities. Classic Eastern Europe: Budapest, Vienna, and Prague starts in Hungary and Austria before exploring Prague and other popular Czech sites such as Cesky Krumlov.

MODERATE | TAILOR-MADE: Few cities in Europe can capture the romance and uniqueness of Prague. On this short escape - the perfect addition to a wider European vacation - spend a few days visiting in the stunning Czech capital while also exploring surrounding towns and learning of their unique, sometimes tragic, history.

FIRST-CLASS | PRIVATE-GUIDED: Explore Central Europe on this 11-day, tailor-made trip through Germany, Czechia, and Poland. Stay in first-class accommodations as you explore Berlin and the beautiful Sanssouci Palace, cruise the Vltava River in Prague, visit Auschwitz-Birkenau Concentration Camp near Krakow, and relax in the Polish capital Warsaw.