Romance and Fantasy in Southern Germany

One of Europe’s biggest countries with one of its most complex histories, Germany is a destination that rewards repeated visits. It offers dynamic, unique cities such as Berlin, Munich, Hamburg, and Cologne, with plenty of often sobering history to discover. But ‘practical and efficient’ Germany can also seem blissfully romantic, particularly in its southern states of Bavaria and Baden-Wuttemburg. The country’s two biggest airport hubs at Frankfurt and Munich offer perfect start and end points for any trip through this beautiful region, or take a round trip to dive deeper into one of Europe’s most exciting countries.

MODERATE | ESCORTED COACH TOUR: See Germany at its most romantic, stepping into the land of iconic castles and fairy tales as you embark on this first-class, shared trip from Frankfurt to Munich. See the university town of Heidelberg, soak in the baths of Baden-Baden, and explore the magical Black Forest before taking to the Alpine Road.

How Long Should I Stay in Frankfurt?

Frankfurt am Main, uncharitably nicknamed ‘Bankfurt’ or ‘Mainhattan,’ is the financial capital of Germany, known more for its airport and trade shows than any tourist attractions. But don’t board the first train out of town just yet. If you do have an extra day or two up your sleeve, Frankfurt is also home to arguably Germany’s best collection of museums outside Berlin. It also holds Germany’s largest botanical garden, and the mind-bending exhibits of Art City. If you do decide to get out of the city, Frankfurt is an ideal base for a Rhine and Lorelei wine tasting day. 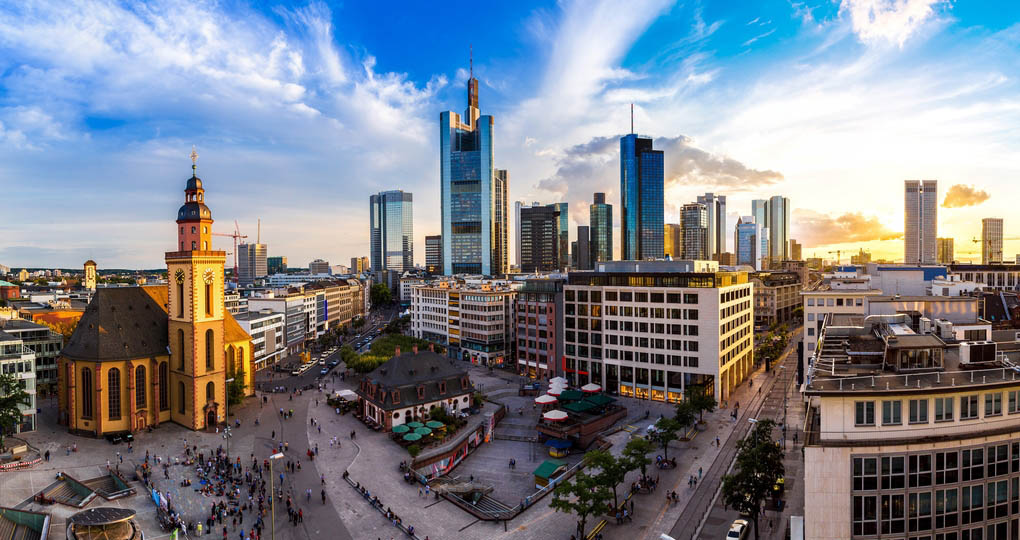 Southwest Germany is a diverse treasure trove containing many of the country’s most appealing towns. Just up the Rhine from Frankfurt, Heidelberg’s namesake university has ranked among Germany’s most prestigious since the 14th century. Red sandstone architecture and lush greenery overlooking the Rhine make wandering the city an absolute pleasure, if not an outright indulgence. The indulgence comes further south at Baden-Baden, a spa town on the Rhine’s banks that has lured Europe’s royalty, nobility, and well-to-do since the early 19th century.

This region of Germany is also a just a hop, skip, and jump from modern day France, and one of that country’s best wine regions, surrounding the town of Colmar. The city of Strasbourg also charms with its fusion of German and French influences, seen in its architecture including an impressive gothic cathedral. No surprise then, that this is also an important city within the European Union, and home to the official seat of the European Parliament. 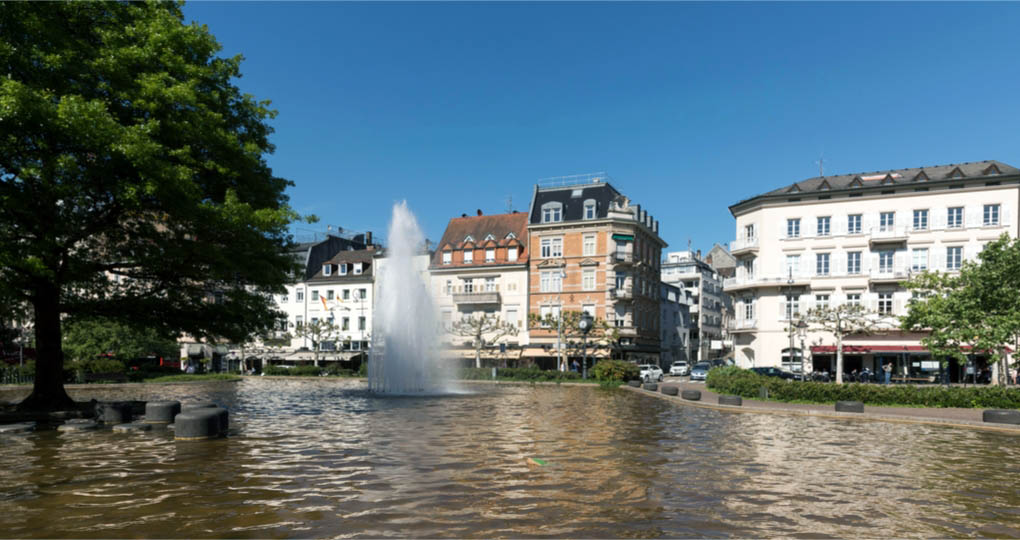 Into the Alps, and a ‘Mad King’s Fantasy World

Rising seemingly out of nowhere on Germany’s southern edge, the Alps are one of Europe’s favourite natural playgrounds, whether it’s for skiing in the winter or hiking in summer. Tucked away in the mountains are some of Bavaria’s most delightful towns, including Obermmergau, home of the traditional Passion Play, staged every 10 years in its own custom-built theatre. In 2020, those not daunted by the 5 hour running time can see the epic production from May 16 until October 4. Right nearby is Linderhof Castle, the small but exquisite retreat of the reclusive King Ludwig II. No first time visit to Bavaria however is complete without seeing the king’s most eccentric creation, Neuschwanstein Castle, just a short distance from his childhood home, Castle Hohenschwangau.

This fabled retreat built in the final years of Ludwig’s life reveals an intensely private man who resented the pressures of public life. The king also struggled to reconcile his profound Catholic faith with a repressed homosexuality confessed in diaries and letters. He commissioned Neuschwanstein as a personal escape into the world of medieval romance and chivalry he so idealised. Ludwig would enjoy the splendor and solitude of his still unfinished castle for less than 6 months before being declared insane, arrested, and possibly murdered, depending on which version of the story you believe. 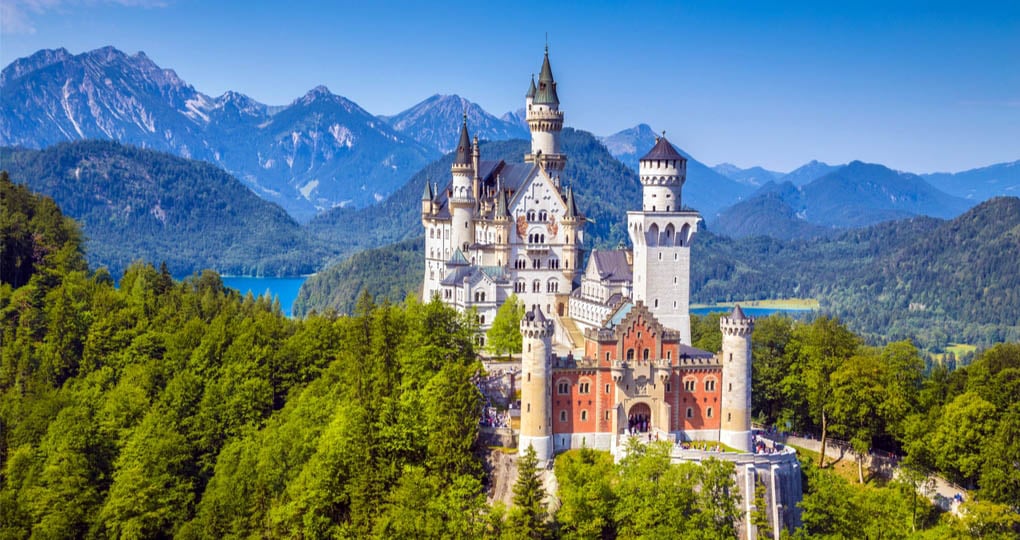 How to Visit Neuschwanstein

Still unfinished, Neuschwanstein today lures up to 6,000 visitors a day in the summer, a figure that would no doubt horrify the reclusive king. If you’re one of them, and your guide isn’t buying tickets for you, know that they can sell out quickly, and are strictly timed, meaning if you miss your tour, you’ll need to purchase a new ticket, without refund. This is Germany. Be on time. The castle is also located a pleasant half hour uphill walk from the ticket office, where tickets must be bought in advance. In the summer, you can opt to take the shuttle bus, and visit Marienbrucke (Mary’s Bridge) for what is perhaps the most famous view of the castle. The bridge is closed on snowy winter days for safety reasons.

At just 35 audio-guided minutes, the tour itself feels quite fast, and there a no photos allowed inside, which speeds things up even more. Nonetheless, even following the crowds, it isn’t difficult to lose yourself, just for half an hour, in King Ludwig II’s astonishing, if melancholy fantasy world. 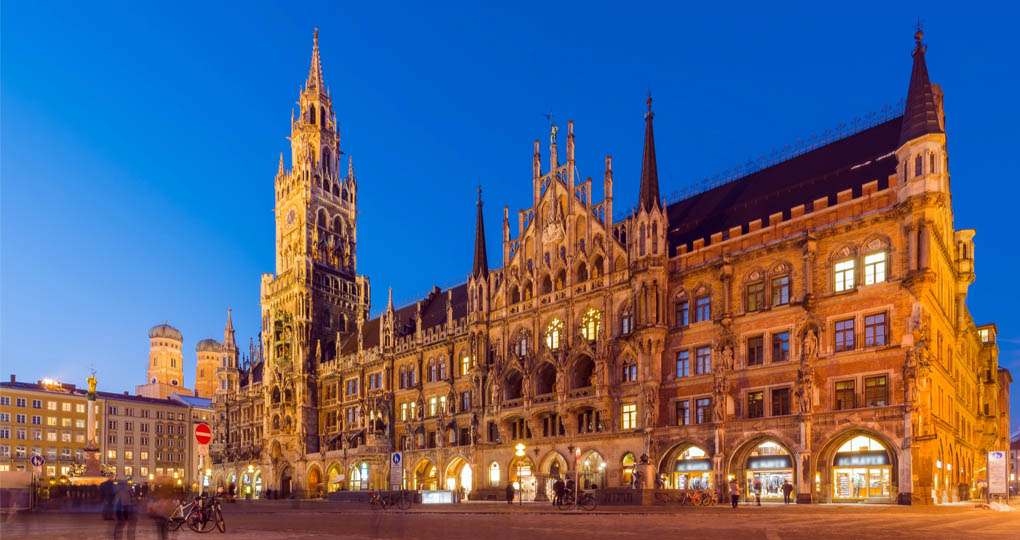 Spending the Perfect Day in Munich

If we’re honest, the ‘perfect day’ in Munich is more like two or three days. There’s just that much to do in Bavaria’s energetic capital, from the stately rooms of the enormous Residenz Museum to the high tech thrills of BMW Welt. That’s not even getting started on the beer halls that define so much of the city’s social culture. If you only have one day, start your exploration at Marienplatz, where the city’s famous glockenspiel springs to life on the clock tower of the ‘New’ Town Hall. Then amble your way through arguably Germany’s most delightful big city until you reach the Residenz, a city within a city that once housed Bavarian royalty. Allow at least two hours for the full tour, or just pop into the exquisite Treasury if you’re pressed for time. Those who are really keen can take another day to visit Nymphenburg, the family’s sumptuous summer palace a short tram ride from the old town.

Culture vultures will want to spend the afternoon exploring the Kunstareal, where Munich’s biggest and best art museums come together. Tech geeks and families might instead find their fun at the Deutsches Museum, one of the best science and technical museums in the world. Car lovers of course will want to make pilgrimage to Munich’s most popular attraction, BMW Welt, with its gleaming showroom and exhibits dedicated to the history, present, and future of the iconic brand.

Oh, and if you’re looking for a beer hall, Hofbrauhaus may offer the traditional music and rowdy atmosphere many associate with Bavaria (and it is fun!), but the local favourite is Augustiner, whose beer hall is located a stone’s throw from Munich’s Central Station. Most restaurants in Munich will work with only one of Bavaria’s big 6 breweries, so keep this in mind if you’re looking to sample your way through the local beers. Munich is traditional and fiercely protective of its favourite beverage (called ‘liquid bread’ in Bavaria), so save the craft beer tour for another destination. 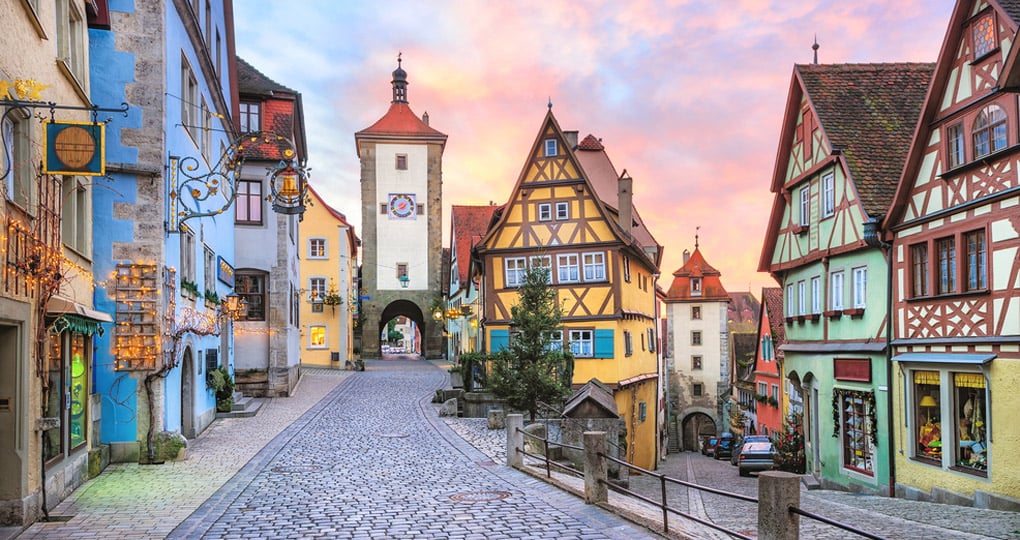 Extending the Journey – Nuremberg and the Romantic Road

Romance probably isn’t the first thing most people associate with Nuremberg, and the city’s excellent Documentation Centre occupying the former Nazi Party Rally Grounds more than explains why. Despite this dark chapter in its history, it is one of Bavaria’s loveliest cities, with lighter high season crowds than sometimes manic Munich. An impressive castle, gothic architecture, and attractive city squares bring your visions of medieval Bavaria to life. Nuremberg is also home to some of Germany’s most impressive Christmas markets if you’re here in season.

Then, there’s Rothenburg ob der Tauber, a town that seems almost too traditionally beautiful to exist in the 21st century. A highlight of Germany’s Romantic Road, it’s worth braving the high season crowds to lose yourself in the medieval streets, wander the castle garden, visit the popular Christmas museum and follow the city wall on Rothenburg’s ‘Tower Trail.’

The actual Romantic Road begins in Wurzburg, located halfway between Nuremberg and Frankfurt, and is worth visiting in its own right for its architecture, built in the lavish baroque and rococo styles.

Heart of Germany: Frankfurt to Frankfurt

Let the experts do the driving as you take a deep-dive into the history of Germany’s southern half. On this journey from Frankfurt to Nuremberg, you’ll stop off at famous historical sites and explore famous medieval cities, including Heidelberg, Strasbourg, Munich, and Rothenburg.

DELUXE | PRIVATE-GUIDED: Embark on a private tour of Germany’s Romantic Road, a breathtaking stretch of medieval old towns and fairy tale castles between Frankfurt and Munich. As you pass through Wurzburg, Rothenburg, and Fussen, you’ll tour medieval squares, walk along city walls, and visit breathtaking castles like Neuschwanstein.

DELUXE | PRIVATE-GUIDED: Let your stomach be your guide as you feast on the wine, food, and beer of Western Europe’s largest nation. Heading from Frankfurt to Munich to Nuremberg, you’ll sample German delicacies, from creamy kasspatzle to savory bratwurst, and explore some of the most romantic medieval towns in all of Europe.