Jordan: Things to do

Every country has its outstanding and special attractions. Goway has selected its Top 10 things to do in Jordan (not in any particular order) for you to enjoy on your visit to this destination. 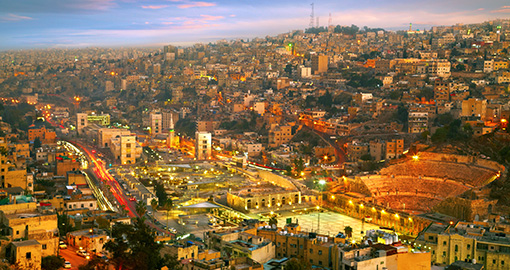 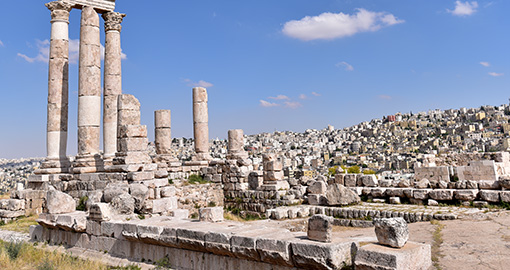 The Amman citadel is perched on top of one of the seven hills that make up the city and is considered to be among the world's oldest continuously inhabited places. It has had a long history of occupation by many great civilizations dating back to the Neolithic period (around 8000 BC). The buildings which are viewable now on a Jordan vacation are from the Roman, Byzantine and Umayyad periods. These include the ruins of the Temple of Hercules, a Byzantine church and the Umayyad Palace, a complex of royal and residential buildings and the best-preserved in the Citadel. Archaeologists have been working at the site since the 1920’s but a large part of the Citadel is still unexcavated. The view from the citadel of Amman is spectacular. 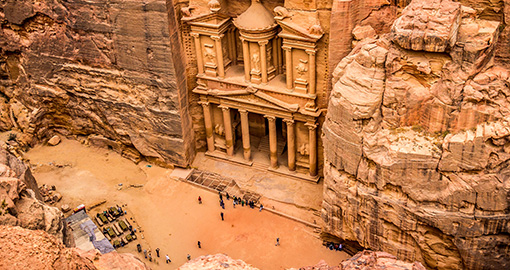 Petra is a historical and archaeological city in southern Jordan. It was established possibly as early as the 4th Century BC as the capital city of the Nabataean Kingdom (the Nabataeans were nomadic Arabs) with a population of around 20,000 inhabitants. It is the number one attraction on trips to Jordan and remained unknown to Europeans until it was rediscovered in 1812. It is carved into the rose-coloured rock face and is a vast complex initially reached via the Siq, a narrow gorge, 1 kilometre/half a mile long flanked by high cliffs. At the end of this gorge, you arrive at the Treasury carved out of the rock face in the first Century AD. Its purpose was containing the tomb of an important Nabataean king. After this, you enter a valley where you will find a great expanse of land containing hundreds of rock-cut tombs. Roughly 500 still exist. Highlights include a Roman-style theatre, obelisks, temples, colonnaded streets and the Ad-Deir Monastery which is situated on top of a rock face and reached by climbing 800 steps. Also located here are the Petra Archaeological Museum and the Petra Nabataean Museum. 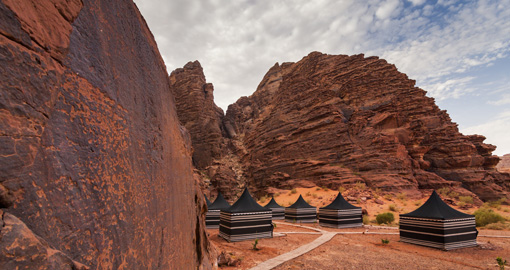 Wadi Rum, also known as The Valley of the Moon, is a valley cut into the sandstone and granite rock in southern Jordan and is quite isolated and mainly inhospitable to human life. It offers one of the easiest glimpses of the desert in the region. It is possible to stay over at one of the desert camps on a Jordan vacation to really savour Wadi Rum. The only permanent inhabitants are several thousand Bedouin nomads keeping the area unspoilt. There are a large number of soaring cliffs which add to the attraction. Jebel Rum is the second highest peak in Jordan rising directly above the Wadi Rum valley. Four Wheel Drive vehicles and Jeeps are mainly used to tour the valley although it can be done on a camel ride. 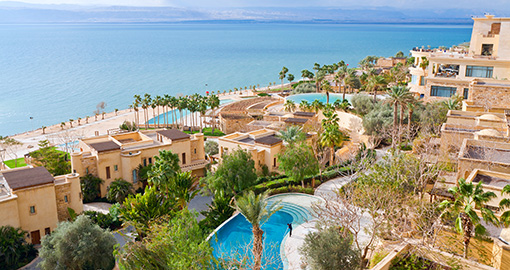 Jordan shares the Dead Sea with Israel, the lowest point in the world. The water in the Dead Sea is extremely salty and has been estimated to be the second saltiest major body of water in the world. Due to this, you can float with ease in the sea where it is nearly impossible to sink. The mud along the shore of the Dead Sea contains many minerals and is believed to have medicinal and therapeutic qualities. There are a number of resort hotels which line the shore of the sea. You can enjoy a spa treatment, watch the sunset across the sea and look over to the West Bank to view lights of Jerusalem in the distance. 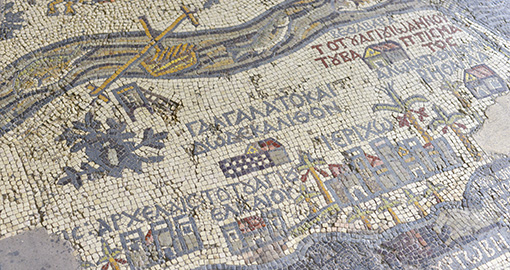 Not far from the Dead Sea is the town of Madaba, known as the 'City of Mosaics' and famous for its Byzantine and Umayyad mosaics, especially a large Byzantine-era mosaic map at the Saint George Church, a 6th Century mosaic depiction of Jerusalem and parts of the Holy Land. 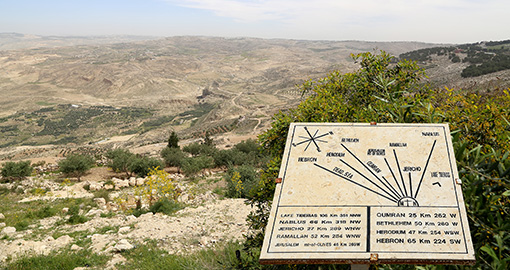 Mount Nebo is a 10-minute drive from Madaba. The site has some wonderful views of the Dead Sea and Jericho in Israel and on a really clear day, Jerusalem. This is the spot where the Bible states that Moses went to see the "promised land." The excavated remains of a church and a monument, discovered in 1933, commemorating the biblical story of Moses stand on top of the mountain. The church was first constructed in the second half of the 4th Century to commemorate the place of Moses' death. 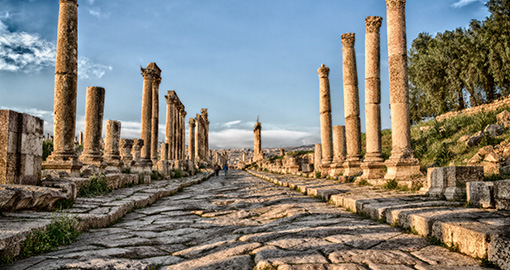 The ancient city of Jerash is one of the most popular attractions on trips to Jordan after Petra. It is considered one of the largest and best-preserved sites of Roman architecture in the world outside of Italy and its history dates back more than 6,500 years. It consists of outstanding colonnaded streets, public squares, theatres, fountains and hilltop temples. Jerash was a thriving city during the 4th Century BC under the rule of Alexander the Great. During its prime, Jerash had roughly a population of around 20,000. It was later invaded by the Persians and then the Muslims and suffered an earthquake causing sufficient damage for it to be abandoned, hidden for centuries, as it was buried under the sand. It was rediscovered in 1806 and has been excavated since 1925. 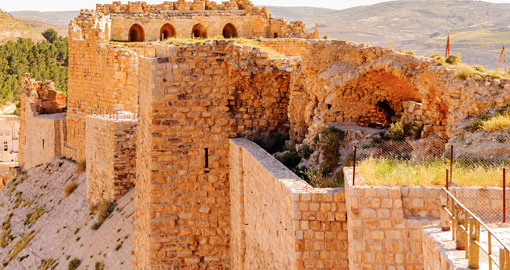 Kerak is a fortified, ancient Crusader castle located 900 metres/2830 feet above sea level with a view of the Dead Sea and lies inside the walls of the old city. The castle dates back to the 12th Century and took the Crusaders 20 years to build. A good way to see the castle is through its Sound and Light performance when it is lit by 50 post lights accompanied by a short documentary movie about the history of Kerak. There is an Archaeological Museum (Castle Museum in the lower court of the castle which covers the local history and archaeology of Kerak Castle, the region and the city. There is an exhibition of excavated artifacts. 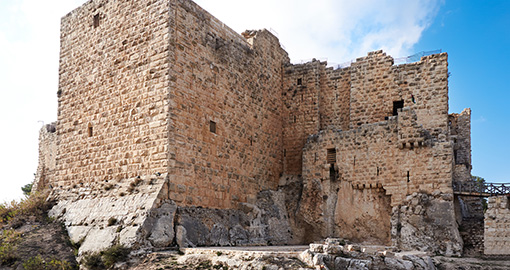 Ajloun Castle is a 12th Century Muslim castle situated in north-west Jordan located on a hilltop. The castle stands on the ruins of a monastery, traces of which were discovered during archaeological excavations. It was an important link in the defensive chain against the Crusaders who were unsuccessful in capturing it. The castle was largely destroyed by Mongol invaders in 1260, only to be almost immediately rebuilt by the Mamluks. Earthquakes in 1837 and 1927 badly damaged the castle, though slow and steady restoration is continuing. Its location dominates a wide stretch of the northern Jordan Valley. It is guarded symbolically by ten soldiers who are placed at different gates. 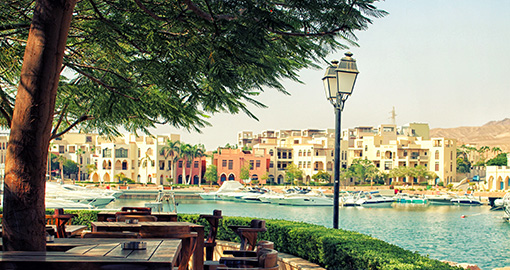 Aqaba is a resort on the north-east tip of the Red Sea in the Gulf of Aqaba, handy for visits to Petra and Wadi Rum. It is an excellent place for scuba diving and snorkeling on trips to Jordan with mild temperatures in the winter but hot in the summer. Run by the Royal Society for the Conservation of Nature, the Aqaba Bird Observatory is an artificially created wetland that is host to a variety of species that use the area as a stopping-off point on bird migrations between Africa, Europe and Asia. Birders will get particular pleasure from the concentration of white-eyed gulls as the Gulf of Aqaba has the largest population in the world.