Things to do in Hong Kong

Every country has its outstanding and special attractions. Goway has selected its top 10 things to do in Hong Kong (not in any particular order) for you to enjoy on your visit to this destination. 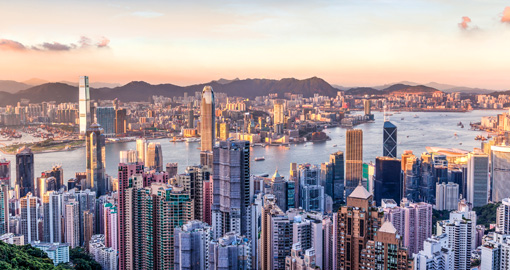 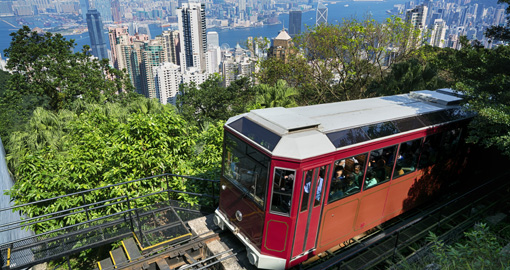 Hong Kong Island is dominated by Victoria Peak, the island's highest peak which can be seen from the harbour and almost everywhere else on a Hong Kong vacation. There are several ways to reach the summit – by road or bus, also via the Peak Tramway. It is possible to hike up to the top of the peak but this is reasonably strenuous. The main attraction of the mountain is the view from the top which has restaurants and boutique shops. The summit is not open to visitors as it is occupied by a radio tower. The Peak Tower has a series of escalators that connect to all levels of the tower and at the top is the Viewing Platform at Sky Terrace. 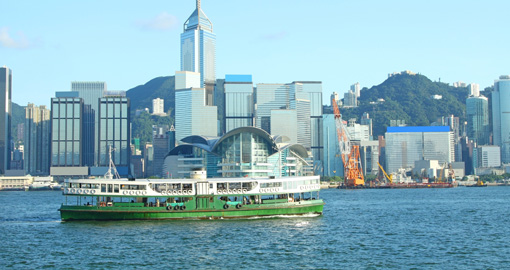 The Star Ferry sails across Victoria Harbour between Kowloon (Tsim Sha Tsui) and Hong Kong Island (Central), the two principal parts that make up a large chunk of the city. It is the cheapest entertainment in Hong Kong as it costs 25 cents US/35 cents Canadian one way. You will experience spectacular views of the skyline of Hong Kong and a glimpse of the harbour activity during the 15-minute journey. Ferries depart every 6 to 12 minutes depending on the time of the day. If you want a slightly longer ride, you can catch a ferry between Kowloon and Wan Chai further along Hong Kong Island. The Star Ferry's Harbour Tour sails on a circular route for an hour around Victoria Harbour covering and calling in at Tsim Sha Tsui, Central and Wan Chai. 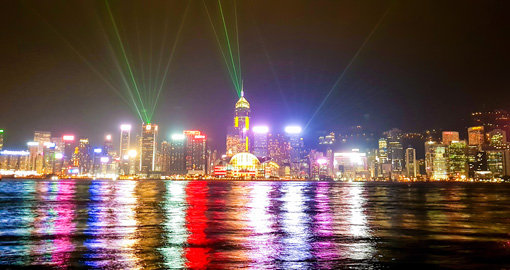 As Hong Kong has one of the most spectacular skylines anywhere, the promenade here is one of the best ways to obtain a great view. It gets especially crowded during the Chinese New Year fireworks displays in late January/early February and in June during the Dragon Boat Festival. Along the first part of the promenade is the Avenue of the Stars which pays homage to the Hong Kong film industry and its stars with handprints, sculptures and information boards. In the evening, the Symphony of Lights begins. This is a spectacular sound-and-light show involving 44 buildings on Hong Kong Island skyline. The Symphony of Lights has been named the “World's Largest Permanent Light and Sound Show” by the Guinness Book of World Records. This is done with coloured lights, laser beams and searchlights, all synchronized to music. Live narration is available in three languages, English, Cantonese and Mandarin, depending on the night. 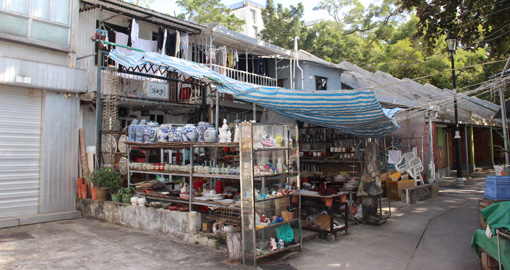 The most renowned market which is visited almost by every visitor on a Hong Kong vacation is Stanley Market on the south side of Hong Kong Island. It is a labyrinth of narrow alleyways containing stalls and shops selling every kind of merchandise including silk garments, sportswear, art, Chinese costume jewellery and souvenirs. There are also a number of restaurants available for lunch or a snack. 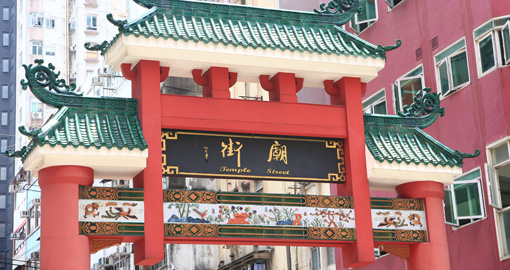 Kowloon is home to the majority of the street markets. There is the Ladies’ Market in Mong Kok with more than 100 stalls offering what most women are happy to find – bargains. The name derives from the type of merchandise sold here such as clothing, cosmetics, CDs, trinkets, leather goods and, of course, SHOES! It stays open until late in the evening.

The best-known “night market” is the Temple Street Night Market at Jordan in Kowloon. Here you can find not only merchandise for sale but also it is a place for singers, buskers and fortune tellers to entertain you. It is a very lively part of Hong Kong. You can pick up almost anything from electronics to clothes and food.

The Bird Market, which is located in a traditional Chinese garden in Mong Kok is worth a visit to see the dozens of stalls selling exotic birds in cages. The Chinese have traditionally liked to keep birds as pets and here, you will see old men with their cages taking their birds for "walks" much like you would take your dog to the park.

Cat Market on Hong Kong Island is where you might find a rare antiques such as Ming Dynasty furniture or something from the Chinese Cultural Revolution. The market is a mixture of antique dealers, curio merchants and art galleries. This is also the place to look for bargains in jade, silk products, embroideries and wooden handicraft items. 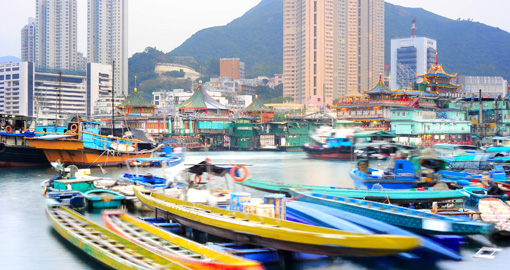 Once a fishing village, Aberdeen is now a popular place for visitors to enjoy on Hong Kong tours. Situated on the southern side of Hong Kong Island, the historic area is known as original Hong Kong since it was the first harbour that European explorers set foot on. The floating village here is awash in boats which the locals use for fishing and trading. Nearby is the floating Jumbo Kingdom, the famous floating restaurant. A free shuttle ferry takes you to the restaurant. You can also take a Sampan boat ride around the harbour which lasts about 20 to 30 minutes. 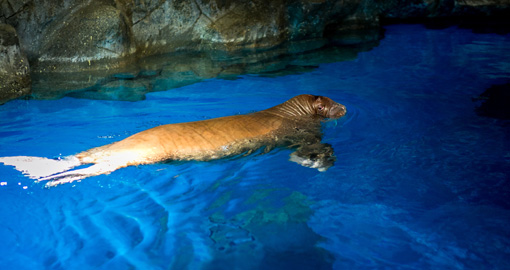 Ocean Park is a marine mammal park, oceanarium, animal theme park and amusement park situated in the Southern District of Hong Kong. It is, together with Hong Kong Disneyland, one of the two large theme parks in Hong Kong. It has a total of 80 attractions and rides. The park is separated by a large mountain into two areas, The Summit (Headland) and The Waterfront (Lowland). These areas can be reached by a cable car system or the Ocean Express funicular railway. The attractions and rides include four roller coasters, animal exhibits with different themes such as a giant panda habitat, rainforest and polar displays and an aquarium featuring the world's largest aquarium dome.

This world-famous theme park is located on reclaimed land in Penny's Bay, Lantau Island. It consists of seven themed areas: Main Street, designed to resemble an early 20th Century Midwest town in the U.S.A., Fantasyland, Adventureland featuring jungle-themed adventures, Tomorrowland, an optimistic vision of the future, Grizzly Gulch, reminiscent of an abandoned mining town, Mystic Point, a dense, uncharted rain forest surrounded by mysterious forces and supernatural events and Toy Story Land bringing to life characters and places from Disney's movies for children. On entering a land, a guest is completely immersed in a themed environment and is unable to see or hear any other. 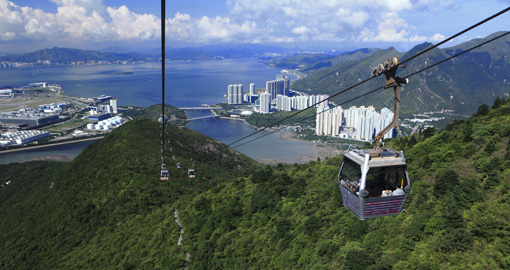 Reached by ferry from Central, Lantau Island is a quieter and more serene place. There are a number of attractions on which to spend time on a Hong Kong vacation. Ngong Ping 360 is a spectacular 5.7 kilometre/3.5-mile long cable car journey that takes in an impressive cultural-themed village and the Tian Tan Buddha. At the themed village, there are a couple of attractions. The Walking with Buddha attraction gives an interesting introduction to Buddha. The Monkey's Tail is a silent animated movie, The Tian Tan Buddha is the largest seated outdoor Buddha in bronze. It weighs over 250 tons and is 34 metres/111 feet tall. Also on the island is the Po Lin Monastery founded in 1906. The main temple building houses 3 bronze statues representing Buddha of the past, present and future. Tai O) is a traditional fishing village where the houses are built on stilts and is known as “The Venice of Hong Kong". For a small fee, some residents will take visitors out on their boats along the river and for a short trips into the sea to view Chinese white dolphins. The village is also a good place to see the sunset. 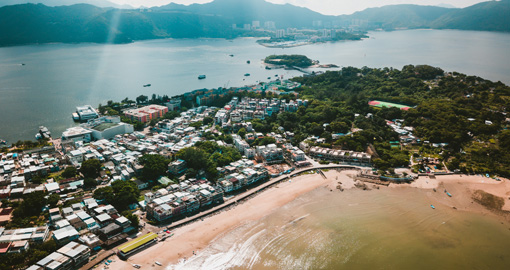 Once again reached by ferry from Central Peng Chau Island is definitely “off-the-beaten-track”. There are no cars, buses or taxis on this island. It is a place for walking or cycling – bikes are available for rent. The island has 8 temples including the Tin Hau Temple dating back to 1792. Around the coastline, you can view marine life including Chinese white dolphins. Finger Hill is a popular spot with panoramic views of the island. There are also a number of beaches dotted around the coastline.