Things to Do in Indonesia

Every country has its outstanding and special attractions. Goway has selected its Top 10 things to do in Indonesia (not in any particular order) for you to enjoy on your visit to this destination. 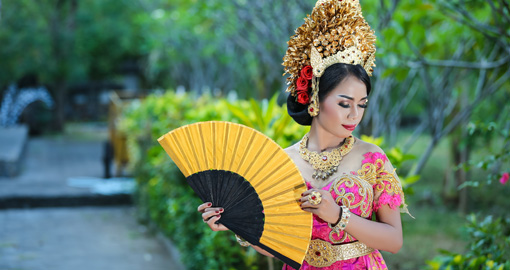 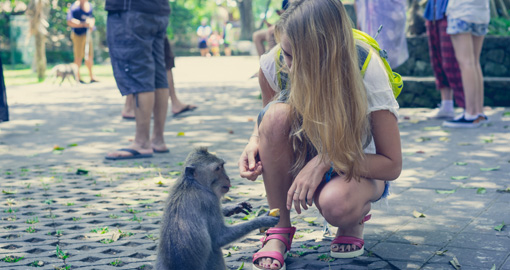 Ubud is situated in the centre of the island and is cooler than the beach areas. It is known for its relaxed atmosphere, lush surroundings and its arts and crafts to be enjoyed on Bali vacations. The Ubud Monkey Forest, also known as the Sacred Monkey Forest of Padangtegal, is home to a number of grey long-tailed macaques near the town centre. You can watch playful monkeys in their natural habitat as well as take a stroll through leafy forest footpaths where there are attractive ancient temples. The Ubud Art Market is open daily and you can find beautiful silk scarves, lightweight shirts, handmade woven bags, baskets, hats and other hand-crafted merchandise. The Ubud Royal Palace is one of the outstanding buildings in Ubud built in the early 1800s. It has well-preserved Balinese architecture and a charming garden. It is one of the main places to enjoy Balinese evening dance performances. 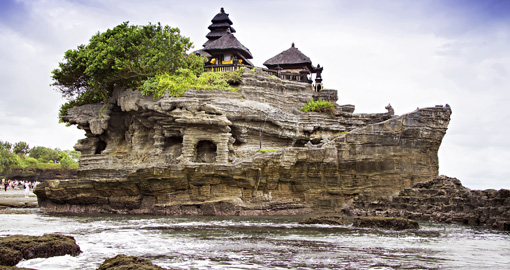 Tanah Lot Temple is famous for its unique offshore setting and sunset backdrops on a Bali vacation. It is an ancient Hindu shrine perched on top of a rock where the waves constantly crash against it. It was established to honour the sea god, Baruna. The site is dotted with smaller shrines and has a cultural park presenting regular dance performances. At high tide, waves flood the causeways making it impossible to cross from the mainland. At low tide, you can cross to view the rock where the legendary ‘guardian’ sea snakes dwell in crevices around a fountain. 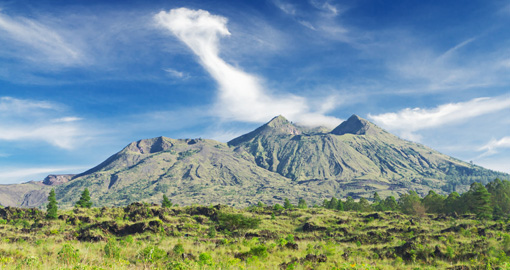 The active volcano on Mount Batur surrounds the large Batur caldera lake. You can view Batur's rugged features of dark lava slopes and black molten rocks from the nearby village of Toya Bungkah which also has lakeside hot springs known for their curative mineral water. The village is a popular choice among trekkers to spend the night before hiking up Mount Batur in time to watch the sunrise. The lush green vegetation and the blue-green-coloured lake serve as a stark contrast to Mount Batur. Kintamani is known as the largest bamboo producer on the island which is used for making traditional furniture items. The best times to enjoy the Mount Batur volcano are from 10 am to 3 pm. 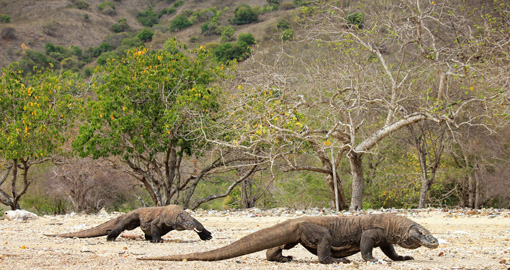 Komodo Dragons are the name for the very large lizards that can be found on 4 islands in Indonesia. These are Komodo, Rinca, Flores and Gili Montang which are all close together. Out of these four islands, Komodo is the one that is populated the most. It is the largest living species of lizard growing to a maximum length of 3 metres/10 feet and weighing up to approximately 70 kilograms/150 pounds. They live in caves, burrows and trees. Dragons have also been found living in Mangrove swamps although they prefer dry places. Komodo Dragons are mostly active during the daytime and are very solitary animals, only coming together to feed and breed. They are capable of running rapidly and very fast in very brief spurts and can run up to 20 kilometres/12miles per hour. To see the Komodo Dragons on an Indonesia vacation, you go on a guided trek which is imperative as these creatures are dangerous and can bite. 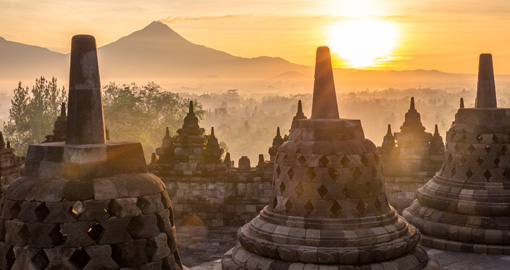 This is the world's largest Buddhist temple built in the 9th Century AD and a UNESCO World Heritage site. It is Indonesia's single-most visited tourist attraction and is not far from the city of Yogyakarta. It is made from two million stone blocks in the form of a massive symmetrical stupa (Buddhist shrine). It has six square terraces which are topped by three circular ones, with four stairways leading up through carved gateways to the top. It is decorated with 2,672 relief panels and 504 Buddha statues. The central dome is surrounded by 72 Buddha statues, each seated inside a perforated stupa. Borobudur has the largest and most complete ensemble of Buddhist reliefs in the world. It is popular for pilgrimages. Once a year, Buddhists in Indonesia celebrate Vesak at the monument. 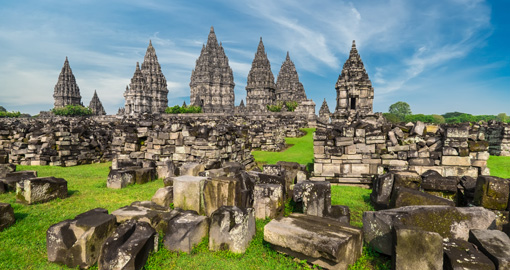 Prambanan is a Hindu temple compound near Yogyakarta. It was built to honour God as the Creator (Brahma), the Preserver (Vishnu) and the Transformer (Shiva). The temple compound, a UNESCO World Heritage Site, is the largest Hindu temple site in Indonesia, and one of the largest in south-east Asia. It consists of around 244 temples erected in the middle of the 9th Century AD, about 50 years later than Borobudur. In the middle of the 16th Century, there is said to have been a great earthquake that destroyed many of the temples. It was not until 1937 that reconstruction began to restore them to some extent. Prambanan suffered extensive damage in the 2006 earthquake. Though the temples survived, hundreds of stone blocks collapsed to the ground or were cracked. Today, on an Indonesia vacation, the main structures have been restored. 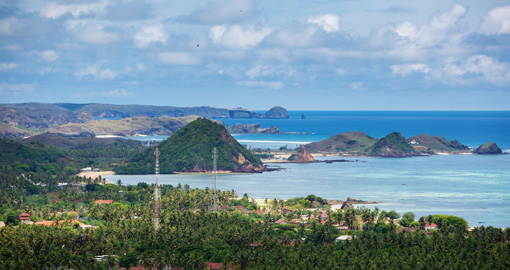 Lombok is a good alternative to Bali on Indonesia vacations with its excellent beaches. It is known for trekking to Indonesia’s second-highest volcano, Gunung Rinjani, through jungle-clad slopes. On arrival at the summit, you are rewarded with amazing views of the whole island. The small offshore island of Gili Trawangan is internationally renowned for beach parties, bars and beachside cocktail lounges. Fishing is a popular pastime as is surfing. 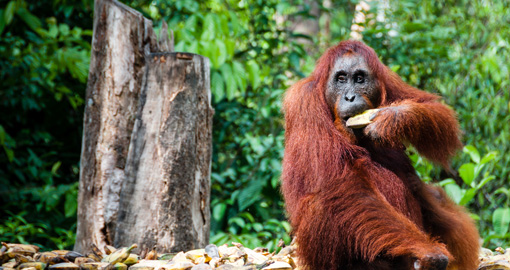 This is the place to see free-roaming orang-utans. It is accessed from the town of Kumai by speedboat. The park was founded in the 1930s for the protection of the orangutans and proboscis monkeys and was designated as a UNESCO Biosphere Reserve in 1977 and a national park in 1982. It is also home to other animals such as gibbons, leopards, wild boars, porcupines and deer. Other creatures include crocodiles, monitor lizards and some bird species. The best way to view all this is on a boat tour stopping to engage with semi-wild orang-utans at the three main feeding stations and also visiting a research centre. Feeding times are generally fixed and scheduled to allow visitors to enjoy all three. 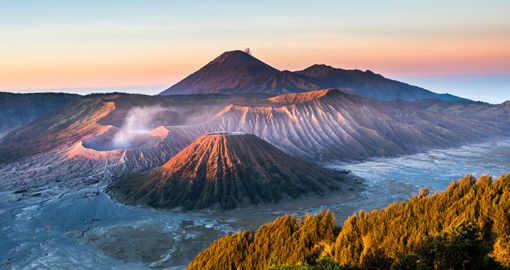 Mount Bromo is an active volcano in East Java. At 2330 metres/7,640 feet, it is not the highest peak in this range of mountains but is the most well-known. A massive eruption once created a caldera with a diameter of more than 8 kilometres/5 miles. One of the attractions of Mount Bromo, on an Indonesia tour, is sunrise. Clouds that cover the sky slowly clear burnt by the sun. The colour changes to a golden hue. The usual way to visit Mount Bromo is from the nearby mountain village of Cemoro Lawang. From there it is possible to walk to the volcano in around 45 minutes. It is also possible to take an organized jeep tour, which includes a stop at the viewpoint of Mount Penanjakan. Depending on the degree of volcanic activity, the Indonesian Centre for Volcanology sometimes issues warnings against visiting Mount Bromo. 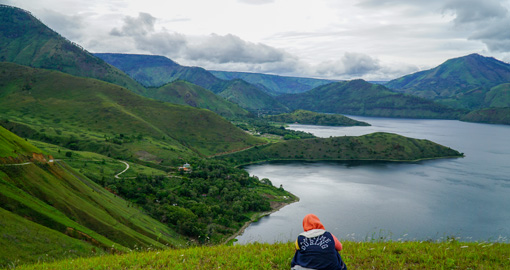 Lake Toba is a large natural lake occupying the caldera of a volcano about 100 kilometres/62 miles long, 30 kilometres/19 miles wide and up to 505 metres/1,660 feet deep. It is the largest lake in Indonesia and also the largest volcanic lake in the world. It is the site of the largest-known explosive eruption on earth in the last 25 million years, some 70,000 years ago. It has been accepted that the eruption of Toba led to a volcanic winter with a worldwide decrease in temperatures. Most of the people who live around Lake Toba are ethnic Bataks. Traditional Batak houses are noted for their distinctive roofs and their colourful decor.