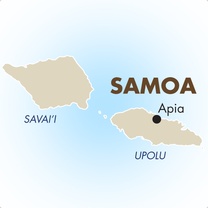 The ten islands of Samoa are all very unique offering different environments and landscapes. With a total landmass that is slightly smaller than that of Rhode Island, Samoa is found in the South Pacific Island about 3,540km (2,200mi) south of Hawaii.

The two principal islands are Upolu and Savai’i.

Upolu: This island is home to the majority of the population of Samoa as well as the capital city Apia. It was formed by a massive basaltic shield volcano. Upolu has proved to be a favourite location for the American television programme Survivor becoming the setting for seasons 19, 20, 23 and 24 - more than any other destination in the show’s history.

Savai’i: This is the largest and highest island in Samoa. It is home to around 23% of the population and houses most of Samoa’s native flora and fauna. With over 100 volcanic craters scattered throughout the island, it is the largest shield volcano in the South Pacific.
The following islands are smaller than the main two and the majority of them are uninhabited.

Manono: One of four inhabited islands in Samoa, Manono had a population of 899 people in a 2006 census. There are no cars or roads and is considerably flat with much low-lying terrain.

Apolima: The smallest of the four inhabited islands, Apolima boasts a population of 75 people. It is less than 1 sq. km across and the only access is by boat.

Fanuatapu: With an area of 15 hectares, Fanuatapu is uninhabited and is made up of a volcanic tuff ring near the eastern tip of Upolu.

Namua: This island is located on the east coast of Upolu. Namua is uninhabited and is quite small; it would only take one hour to walk around the whole island.

Nu’ulua: This island is a habitat for locally and regionally endemic birds. It is made up of the remnants of an eroded volcanic tuff ring.

Nu’usafe’e: A small and remote island, Nu’usafe’e Island is located off of the south east coast of Upolu.

Nu’utele: This island, located 1.3km off the eastern end of Upolu was formed by a volcanic tuff ring and serves as a conservation area for native bird species.

At Goway we believe that a well-informed traveller is a safer traveller. With this in mind, we have compiled an easy to navigate travel information section dedicated to Samoa.

Learn about the history and culture of Samoa, the must-try food and drink, and what to pack in your suitcase. Read about Samoa's nature and wildlife, weather and geography, along with 'Country Quickfacts' compiled by our travel experts. Our globetrotting tips, as well as our visa and health information will help ensure you're properly prepared for a safe and enjoyable trip. The only way you could possibly learn more is by embarking on your journey and discovering Samoa for yourself. Start exploring...book one of our Samoa vacations today!

Book your Samoa Vacation with Goway!

Goway’s Downunder wizards can offer you many ways to explore, and enjoy Samoa. Choose from a simple island stopover and much more.  We want to be your first choice when next you go globetrotting to Samoa.