Penguins of the Falklands Islands

Of the 220 species of bird in the Falkland Islands, five of them are penguins. The King, The Gentoo (world's largest population, 30%), The Rockhopper, The Macaroni and the Magellanic. One location of King penguins is the most accessible in the world (which is by 4WD). In total there are over 500,000 breeding pairs of penguins. It is said that most of the pictures of penguins you see were probably photographed in the Falkland Islands.

Penguin length is measured from the tip of the bill to the tip of the tail, in an outstretched bird. This is a more reliable measurement than height, since it is not affected by variations in stance.

Although it is not hard to enjoy penguin encounters, colonies do vary in size. Please let the Travel Experts at Goway know if there is a particular penguin you really want to meet and we will recommend appropriate locations in your itinerary. 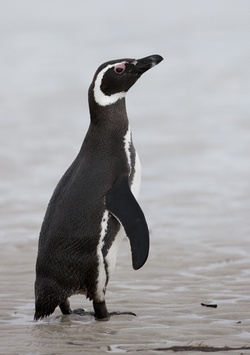 Magellanic penguins are only found around the Falkland Islands and South America, but they are extremely numerous within these regions. The Falklands has a population well in excess of 100,000 breeding pairs.

The Magellanic penguin is around 70cm long, and has an average weight of about 4kg. The head and upper parts are black apart from two broad white stripes beneath the throat; one running up behind the cheeks and above the eye to join the pinkish gape, the second running adjacent to the white underparts with which they merge above the legs. Females are slightly smaller than the males, but have similar plumage.

Magellanic penguins prefer to nest in burrows, but when soil conditions are unsuitable for burrowing, they will nest on the surface using whatever protection they can find.

Magellanic penguins from both the Falkland Islands and South America face natural predators at sea, such as sea lions, leopard seals and orcas (killer whales). They also face predation of chicks and eggs by avian predators, such as gulls and skuas, but where the penguins nest in burrows, such predation is greatly reduced.

Magellanic penguins are popular for tourism, but they are the most nervous of penguins. Visitors that approach breeding sites which do not normally have many visitors, will send the penguins scurrying into their burrows for safety. Magellanic penguins do readily adapt to regular visitation however, and become much less nervous with time.

They are often referred to locally as jackass penguins because of their mournful braying call, a typical sound of the Falkland summer which continues through much of the night. 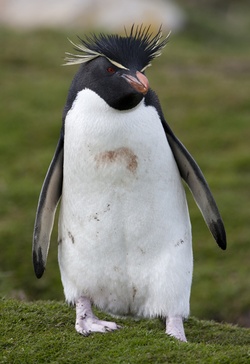 Rockhopper penguins are amongst the smallest of the world's penguins, having an average length of around 52cm, and an average weight of about 3kg. A yellow stripe above each eye projects into a yellow crest, and these are joined behind the head by a black occipital crest. The eyes are red, the short bulbous bill is reddish brown, and the feet and legs are pink. The females are slightly smaller than the males but have a similar plumage.

Colonies are often shared with nesting albatross or cormorants. Rockhopper penguins not only return to the same breeding site each year, but they also utilize the same nest, which they refurbish with stones, sticks, vegetation or any other suitable material. Their preferred nesting sites are steep rock gullies, above approaches into deep water.

Despite being amongst the smallest of penguins, Rockhopper penguins are perhaps the most aggressive. They show little fear of people or of birds and animals larger than themselves. Anything that comes within range of an incubating bird will be pecked, including another Rockhopper, or the long wings of neighbouring albatross. Nevertheless, Rockhopper penguins can be very gentle with their partners, and allopreening (mutual preening) is common.

Rockhammer penguins love jumping over rocks to get about rather than sliding on their bellies like normal penguins. The colorful feathers on their heads make it hard to mistake them, and the crazy colors that are on all feathers going in all directions, remind people of the punk rock generation. 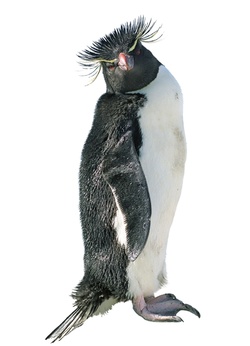 The Macaroni penguin is the most numerous of all the world's penguins, with an estimated world population of over 9 million breeding pairs. They are substantially larger than Rockhoppers, having an average length of around 70cm and an average weight of 5.5kg. The head and upperparts are bluish black, and the underparts are white. Their large reddish brown bill has exposed pink skin at its base; the eyes are red and the legs and feet are pink. The most distinctive features are the golden yellow crests which extend from the centre of the forehead and sweep backwards above the eyes. Females are smaller than the males, but have similar plumage. Juveniles lack the elegant crests, and have dull brown eyes, and browny black bills.

Macaroni penguins breed in colonies on rocky coasts and low cliffs. Their natural predators, such as sea lions and orcas (killer whales) occasionally take adults at sea, whilst gulls, skuas and birds of prey patrol breeding sites for eggs and young. With current populations being so high, there are no special concerns for this species. 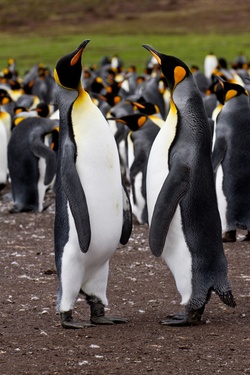 King penguins in a colony

King penguins no longer breed in Patagonia, or indeed any other part of South America. The King penguin is the world's second largest penguin, with a typical weight of 12-14kg, and an average length of 90cm.

King penguins have distinctive orange patches on either side of the head, which extend down and meet beneath the chin, where they become yellow and fade into the silvery white breast plumage. The mandibular plates on either side of the bill are also orange in color. The female is slightly smaller than the male, but has similar plumage.

King penguins make no nest, and instead lay a single egg of around 310g, which they hold on their feet for the entire incubation period of about 55 days. This adaption allows breeding in much colder terrain than would be the case for species that lay their eggs on the ground, and negates the need for nesting material. The eggs are brooded by both parents in turn, with shift changes of 6-18 days; the non-brooding parent going to sea on extended foraging trips.

The newly hatched chicks are also held on the parents' feet for the first 30-40 days, by which time they have developed their mesoptile plumage, and are able to regulate their own body heat.

Human impact is currently very low, despite King penguins being a great tourist attraction in the Falklands. They are very tolerant of human presence, and are not alarmed by the presence of tourists, provided that they remain at the outskirts of the colony. 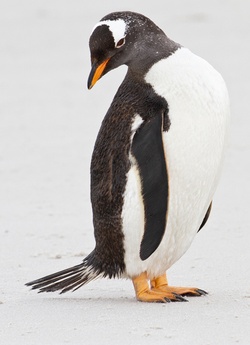 Gentoo penguins have an average length of 80cm and an average weight of 5kg. They have a reddish orange bill, apart from the black culminicorn, and orange feet. White patches about each eye meet across the crown, with white speckling in the adjacent black plumage around the head. Females are slightly smaller than the males, but have similar markings.

Gentoo penguins are ground nesting birds, making rudimentary nests from stones, sticks, grass, feathers, or practically any material that they can find suitable for the purpose.

Because Gentoo penguins at most sites tend to move the colony a few meters each year, they do not retain the same nests from year to year. On occasions whole colonies that have remained at one site for years, will up and move to a new site many kilometers away, for no apparent reason. This may happen suddenly during a single year, or gradually over a number of years.

By comparison with other penguins, Gentoo pair-bonds are often long-lasting, despite annual nest changes. Many adults remain around the colony throughout the year, whilst others take the opportunity during the winter months to make longer foraging trips further afield.

The Falklands is the only Gentoo penguin breeding site with human habitation. Although farming has greatly modified the landscape around the Falklands, Gentoo penguins prefer open plains to breed, and consequently have not been greatly affected by the loss of tall tussac grass. Gentoo penguins are also very tolerant of grazing animals, such as sheep, cattle and horses, which often wander around Gentoo colonies without causing alarm.

For many years the rural communities of the Falkland Islands took Gentoo eggs for food. Until recent years these eggs were an important supplement to the diet of many folk, but now with regular supplies of hen eggs the tradition is gradually dying out. Penguin eggs are always taken at the start of incubation, and the birds rapidly re-lay, so that colonies which have had eggs taken show little difference in productivity by the time chicks are ready to fledge.

At Goway we believe that a well-informed traveller is a safer traveller. With this in mind, we have compiled an easy to navigate travel information section dedicated to the Falkland Islands.

Learn about the history and culture of the Falkland Islands, the must-try food and drink, and what to pack in your suitcase. Read about the Falkland Island's nature and wildlife, weather and geography, along with 'Country Quickfacts' compiled by our travel experts. Our globetrotting tips, as well as our visa and health information will help ensure you're properly prepared for a safe and enjoyable trip. The only way you could possibly learn more is by embarking on your journey and discovering the Falkland Islands for yourself. Start exploring… book one of our Falkland Islands  tours today!

Latin America by Goway is an exclusive division that specializes in planning and organizing Falkland Islands tours, vacations and experiences. To design the best itinerary for you, we at Goway would like to know how specific your interests are for;

We also offer Antarctica cruises that stop over in the Falklands.