Things to do in Mexico

Every country has its outstanding and special attractions. Goway has selected its top 13 things to do in Mexico (not in any particular order) for you to enjoy on your visit to this destination. 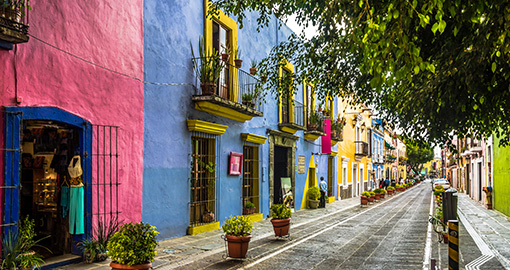 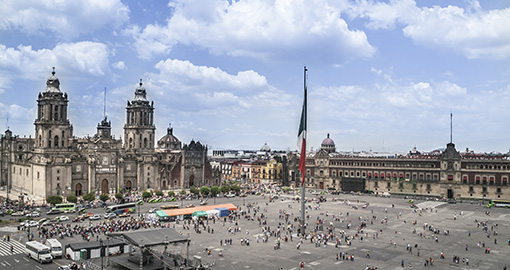 The Historic Centre or as it is known locally, the Centro Historico de la Ciudad de Mexico is very much focused on the Zocalo, the name of the main plaza and the largest plaza in Latin America. The Zocalo occupies 668 blocks and contains 9000 buildings of which 1550 of them have been declared of historical importance. It contains the National Palace,the offices of the President of Mexico and the imposing Metropolitan Cathedral built over two Centuries (1573 to 1813). It is the largest cathedral in Latin America. An important site on a Mexico vacation is the Diego Rivera murals in the palace courtyard, an immense canvas on the walls depicting Mexican civilization from the days of the Aztecs to the post-revolution period. 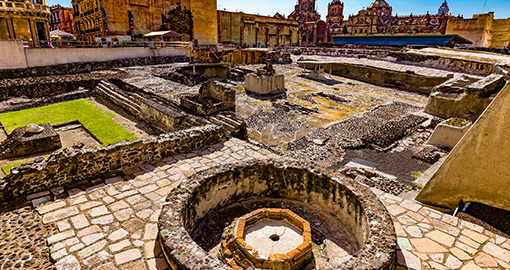 This is an archaeological site and museum only excavated in 1978 and where a huge stone carving of the Aztec goddess Coyolxauhqui was unearthed. The on-site Museo del Templo houses a model of the ancient city of Tenochtitlan which, at its peak, was the largest city in the Pre-Columbian Americas. Artifacts from the site are displayed in the museum such as funerary objects, bones, Colonial-era fine china and pre-Hispanic structures. 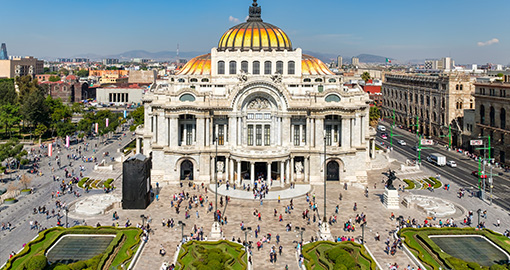 Thisis the principal cultural centre of Mexico City providing entertainment which ranges from music, dance, theatre, and opera to paintings, sculpture and photography. It has subsequently been called the “Cathedral of Art in Mexico". It is an absolutely stunning building known for its murals by Diego Rivera and others. The famous Ballet Folkloric de Mexico performs here. 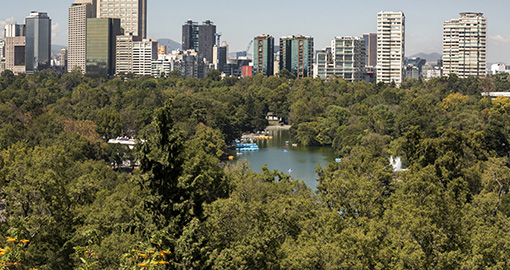 This beautiful park is an enormous and vast green lung in the centre of the city. It is the oldest and largest urban park in Latin America and one of the oldest urban parks in the world with a partly forested area completely surrounded by the urban centre of the city. On Mexico vacations, not only can you stroll around its leafy avenues but you can take in some of the nine museums, the zoo, an amusement park and a castle. The most significant museum here and the largest and most visited in Mexico is the world-renowned National Museum of Anthropology which is considered to be one of the most famous archaeological museums in the world with artifacts from Mexico's pre-Columbian heritage through to the beginning of the Colonial period. On top of a hill stands Chapultepec Castle, a reminder of Mexico’s bygone aristocracy begun in 1785. 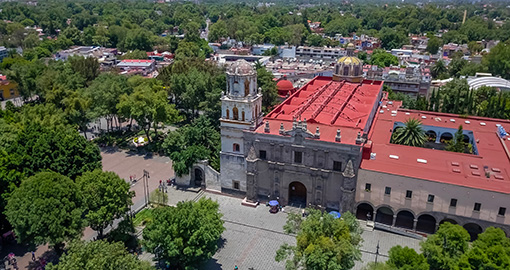 This is a very colourful and lively neighbourhood with many museums, cafes, restaurants, bookstores and markets to experience on a Mexico vacation. It has been home to several Mexican celebrities. This is where Frieda Kahlo, the well-known artist and wife of Diego Rivera spent most of her life having lived in the same house until her death. This house is known as La Casa Azul (The Blue House) and was donated by Diego Rivera to make it a museum in her honour after her death. Another highlight here is the Mercado de Coyoacan, a typical outdoor Mexican market at which you can find anything and everything you may need from groceries to local handicrafts. This is the perfect spot to look for souvenirs at prices generally lower than those in central Mexico City. 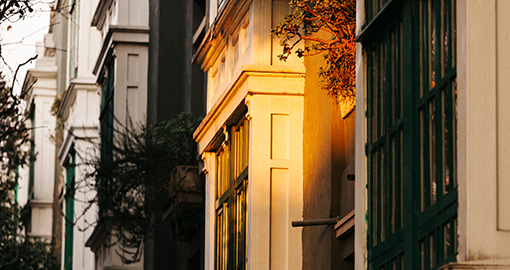 These two neighbourhoods run side by side with no particular clear emphasis as to where one becomes the other. La Condesa is the bohemian quarter of Mexico City and a fashionable neighbourhood with tree-lined streets and any number of boutique stores, cafes and restaurants. Roma is known as the hipster neighbourhood. Besides residential buildings, the streets are lined with restaurants, bars, clubs, shops, churches and galleries. Many are housed in former French-style mansions dating from the beginning of the 20th Century. In both La Condesa and Roma are streets with gorgeous colourful homes, some of which are beautifully restored art deco buildings. 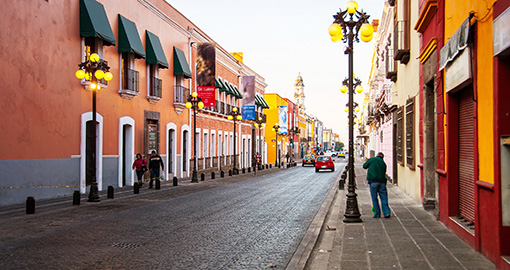 Puebla is known for its colonial architectural destinations as well as being famous for its ceramics. Some of the best-known buildings are the tiled Casa de los Munecos and Casa del Alfenique, the Iglesia de la Compania de Jesus and the Catedral de Puebla, widely considered to be one of the country’s best with its tiled roof. The Museo Amparo has one of the finest collections of Mexican art in Latin America with everything from pre-Hispanic art to modern day pieces. Xanenetla is a vibrant neighbourhood to visit if you are interested in street art with its cobblestone streets and 55 colourful, full wall-sized murals. 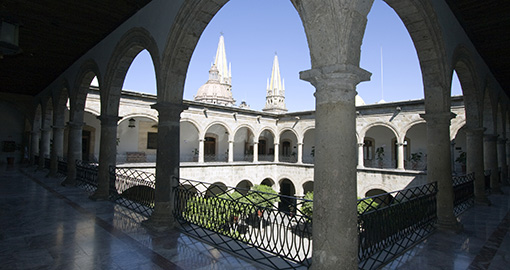 Guadalajara is the second largest city in the country and considered a colonial city, although much of its architecture dates from the independence period. The cathedral here built first in the 16th Century and which took 50 years to complete rivals the one in Mexico City. The mural "The Assumption of the Blessed Virgin" by Bartolome Esteban Murillo must be seen. The Plaza de Armas, south of the cathedral, offers one of the best views of the cathedral and the Palacio de Gobierno (Governor's Office. The Plaza de la Liberacion features two large cup-shaped fountains and a gigantic sculpture of Miguel Hidalgo, the man who signed the Mexican Declaration of Independence. The Mercado Corona Avenida Hidalgo features a variety of foods and souvenir items. The Instituto Cultural Cabanas is a cultural and art centre with fresco paintings and is a UNESCO World Heritage site. The Plaza de los Mariachis is where you will find several mariachis band who offer their music for a small fee. 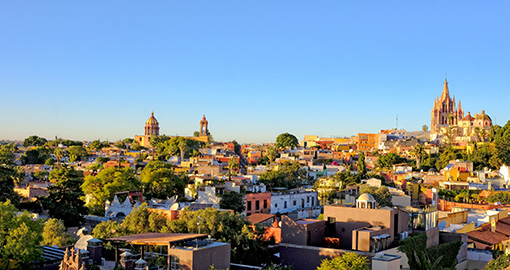 The Spanish Colonial era lasted around 300 years between 1521 and 1821. During this period, many cities and towns in Mexico inherited the style of architecture and ambience of the Spanish influence which can be experienced today on Mexico vacations. Some of the major Colonial cities are San Miguel de Allende, perhaps the best known with its quaint cobblestone street-lined town that has developed a following among artists, San Luis Potosi, an old silver mining city with its colonial inheritance of magnificent buildings, art and public spaces and Guanajuato, a gem named as a World Heritage Site by UNESCO with its genuine Spanish Colonial look, style, feel and atmosphere. 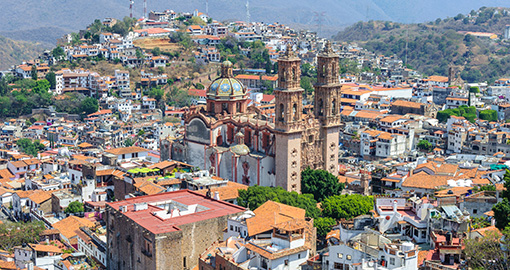 Close to Mexico City is Cuernavaca, another of the country's best-known colonial cities on Mexico vacations. The principal buildings and monuments in the historic centre include El Palacio de Cortes, Palacio de Gobierno, the Cathedral and Casa Maximiliano. Behind some of the tall walls are beautiful gardens and residences owned by wealthy local families dating back to the 15th Century. Perched on a steep hillside, Taxco, once a silver mining town, is now best known for its silver craft. This city is picturesque in a very traditional Mexican way with white stucco buildings with red roof tiles, winding cobbled streets, antique churches and sleepy little plazas. 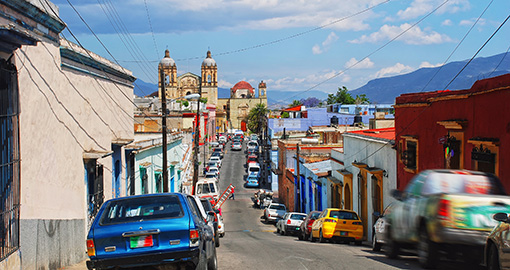 Oaxaca is rich in history and culture where, on Mexican vacations, you can appreciate ancient civilizations, colonial art and architecture and vibrant cultural traditions. It is especially known for its indigenous peoples and culture as well as its prehistoric ruins, baroque churches and monasteries and indigenous markets. At the centre of colonial Oaxaca City is the Zocalo or main square which is surrounded by the cathedral and government buildings. Many of the city’s colonial-era buildings, dating from the 16th century, have been exquisitely restored and now house galleries, museums, hotels, and restaurants. There are several museums in Oaxaca. These include the Museum of Oaxacan Cultures housed in a beautiful monastery, the Museum of Contemporary Art and the Rufino Tamayo Museum with its collection of pre-Columbian art. Oaxaca is also known for its different types of crafts including ceramics, textiles, wood carvings, and tin work. 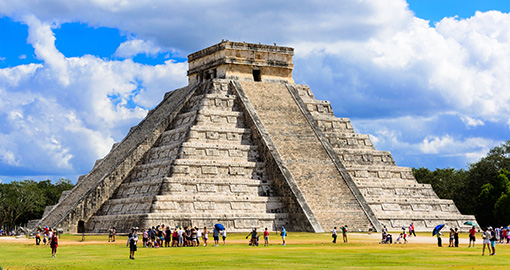 The Yucatan Peninsula is known for both its resorts and Mayan ruins which can be enjoyed together. Merida, the largest city, has a rich cultural life which also reflects its diversity. Many free concerts, performances and other events are held daily. The city's ambience is colonial and it is easy to take day trips to a vast array of destinations including the archaeological sites on Mexico vacation packages. Chichen Itza is probably the most famous and was once a large pre-Columbian city built by the Mayan civilization existing between 600 and 1200 AD. Its most famous building is the Pyramid of Kukulcan, a temple-pyramid dedicated to the feathered serpent of the same name. There are several other temples to explore. Uxmal is an ancient Maya city and considered one of the most important archaeological sites of Maya culture. Its buildings are noted for their size and decoration. Ancient roads connect the buildings. The most important include the Governor’s Palace with the longest façades from Pre-Columbian times and the Adivino also known as the Pyramid of the Magician or the Pyramid of the Dwarf. Tulum is the site of another pre-Columbian Mayan site which is the most picturesque archaeological site on the Riviera Maya and the only one to have been built overlooking the sea. It was an ancient Mayan fortress city that rose to power between the 13th and 15th Centuries and actually survived for a further 70 years after the initial Spanish occupation. It is one of the best preserved archaeological sites in the country and the third most visited on a Mexico vacation package. 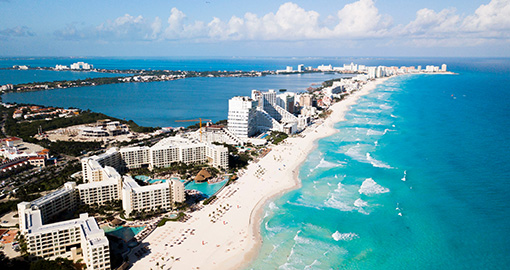 On a Mexico vacation, the Yucatan Peninsula contains a number of popular beach resorts which include Cancun, a fairly recently man-made resort dating back to 1970 before which it did not exist, Cozumel with its excellent scuba diving and snorkeling sites and Playa del Carmen, one of the fastest growing resorts on the peninsula with luxury residential condominium buildings, restaurants, boutiques and entertainment venues.

The whole length of the coastline on the Pacific Ocean side of Mexico has numerous well-developed resorts. The scenery along the Pacific Coast is superior to that of the Caribbean coast.

Acapulco was the foremost beach destination on Mexico vacations but, in popularity, it has been surpassed by Cancun. It offers a vibrant nightlife, excellent shopping and a good choice of restaurants. One of the highlights is the cliff divers who jump from a great height into the sea. 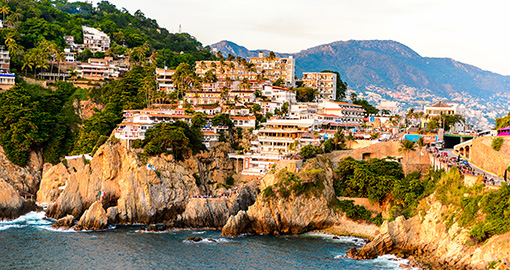 Puerto Vallarta was first put on the map by Hollywood stars Elizabeth Taylor and Richard Burton. It is a very picturesque resort. The town itself has cobblestone streets, white-walled houses and red tiled roofs. In Puerto Vallarta, you can enjoy spectacular sunsets.

Mazatlan is a mixture of culture and history within a modern destination. It is known worldwide as a sport fishing destination. Visitors can enjoy surfing, horseback riding, mountain biking, bird watching and golf in Mazatlan as well as its 25 kilometres/16 miles of golden beaches.

Zihuatanejo retains the feel of an authentic Mexican small fishing town in a beautiful setting as the Sierra Madre mountains are close by. Popular activities include scuba diving, surfing, and deep-sea fishing. 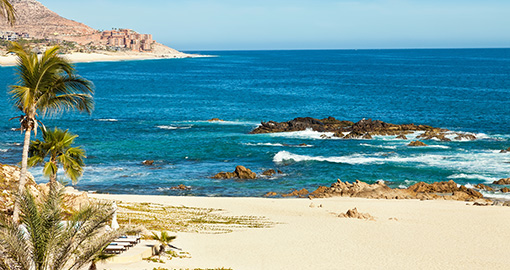 Located on the southern tip of Baja California, Los Cabos is made up of the two distinct cities of Cabo San Lucas and San Jose del Cabo, with a 32 kilometre/20 mile corridor between the two. This is a favourite getaway of Hollywood stars and celebrities who enjoy the gorgeous scenery and luxurious resorts. Only a few of Los Cabos' beaches are suitable for swimming, but there are plenty of other activities such as whale watching, sport fishing, and golfing. Cabo San Lucas has plenty of restaurants, resorts and nightclubs, whereas San Jose del Cabo is a charming town with a number of art galleries and boutiques.