There’s a lot more to do in Mexico than a week or two at an all-inclusive with a side order of Mayan ruin hopping. Not that there’s anything wrong with that, but to get a more balanced, local take on this astonishing country, you’ll need to head to the traditional cities and communities of the interior. Mexico City is a great place to start. Give yourself a day to adjust to the capital’s high altitude and astonishing size, and don’t miss these top sights and experiences. 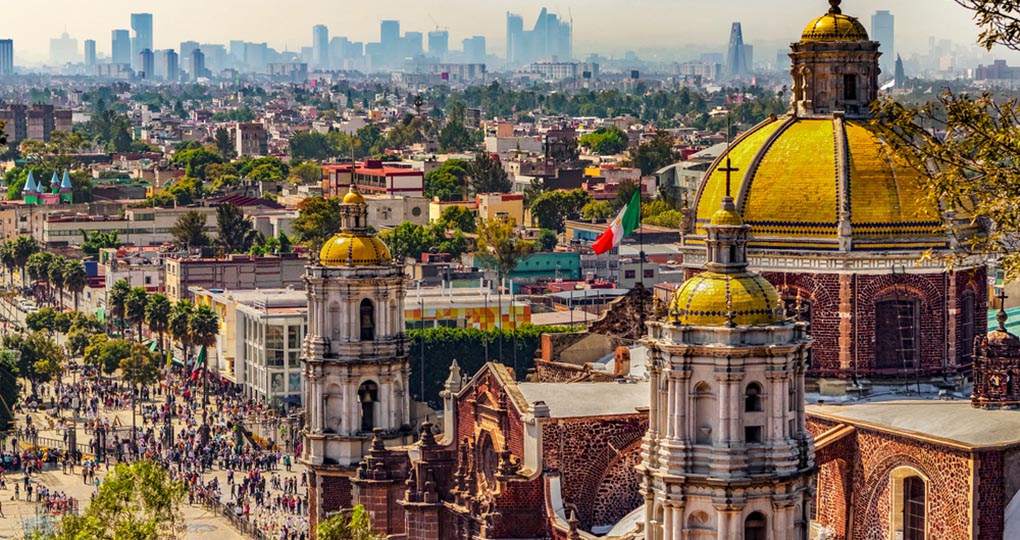 If pre-Columbian history is your passion, you may find your nirvana exploring Mexico’s most visited museum. Conveniently located in Chapultepec Park, this is one of the world’s great history museums, containing 23 exhibition rooms packed with artefacts. Star attractions include the Aztec Sun Stone, unearthed during the construction of the Metropolitan Cathedral, the grinning Disc of Mictlantecuhtli, a recreation of the feathered headdress of Moctezuma II, a replica of Pakal’s Tomb in Palenque, plus countless masks and traditional works rendering Aztec gods and other figures, both historic and mythological. All are housed in a one of Mexico’s most stunning pieces of architecture, designed by Pedro Ramirez Varzquez.

Flanked by the enormous Metropolitan Cathedral and the equally impressive National Palace, Mexico City’s Zocalo is more than just another city square. Pop inside the palace to admire murals by Diego Rivera, then round the eastern side of the cathedral to find a much older place of worship. The Museo del Templo Mayor preserves what remains of an Aztec temple right in the heart of Mexico City. Not just any temple, but the main temple of the Aztec capital Tenochtitlan, destroyed by Spanish invaders to make way for the Metropolitan Cathedral. A model of Templo Mayor as it is thought to have looked at its height is on display in Zocalo metro station. 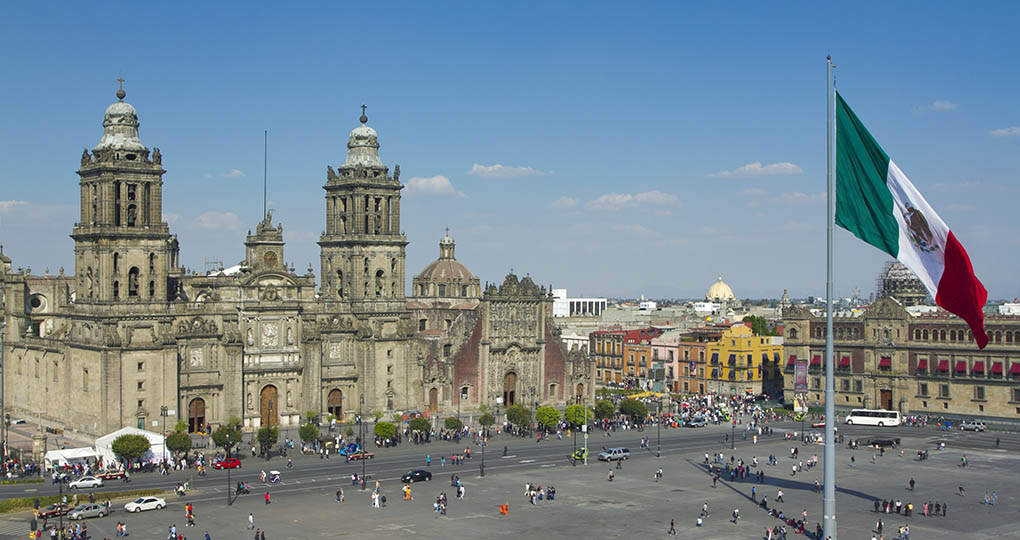 The ‘Floating Garden’ canals of the Xochimilco district are one of Mexico City’s defining images, popular area with visitors and locals alike. It’s a must-visit during your stay, keeping a few tips in mind. Rides on the colourful trajinera boats are charged by the hour per boat, not per passenger, making them excellent value if you’re with a group or can team up with some fellow Globetrotters. The famous Floating Gardens market is a popular highlight, while the macabre Island of the Dolls lures more intrepid travelers who have a half day to spare. Besides a boat ride on the canals, Xochimilco is a great neighbourhood for a diverse, if touristy snapshot of Mexico City’s music, food, art, and most importantly, its people. For a more sedate art fix in the neighbourhood, you can always escape to the Dolores Olmedo Museum. 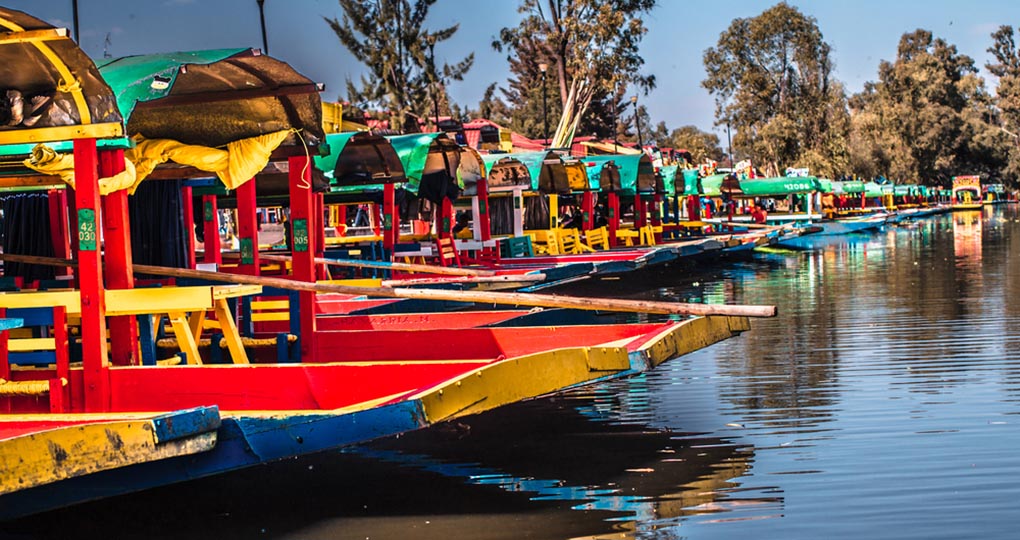 It’s worth devoting half a day to Chapultepec Park, the beautiful green lung that divides the posh Polanco district, the financial downtown, and trendy La Condesa. Besides being home to the Museum of Anthropology, it contains the Chapultepec Zoo, Mexico City’s Museum of Modern Art, and most famously, Chapultepec Castle. Built for former ‘Emperor of Mexico’ Maximilian I (actually a Habsburg), the castle has housed the National Museum of History since 1939. Even if you rush through its dozen galleries, the spectacular stained glass windows are not to be missed, while the terraces offer gorgeous views over Mexico City and the park. 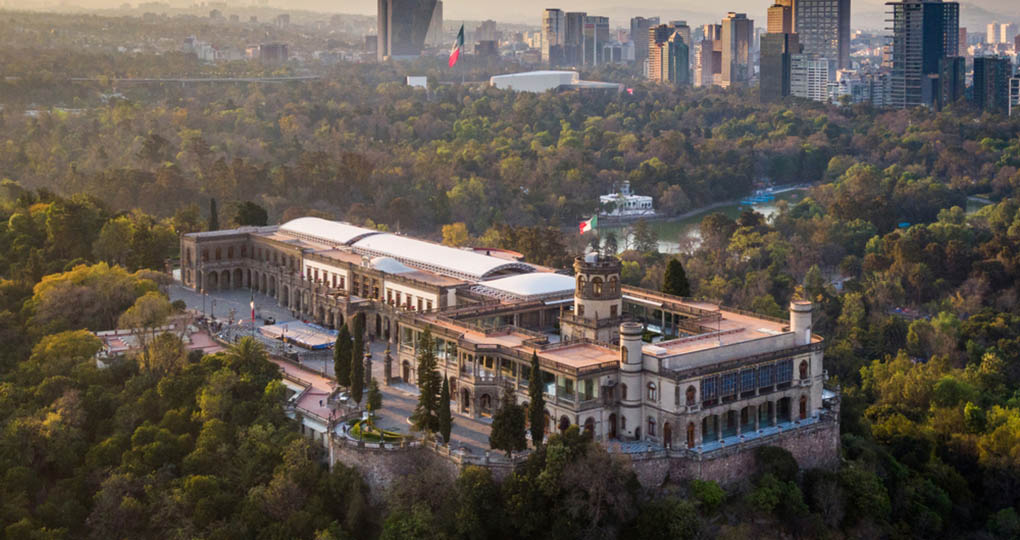 Arguably Mexico City’s most recognised building, the Palacio de Bellas Artes hosts dance, opera, music, theatre, and literary events, in addition to exhibitions showcasing visual arts including painting, photography, and sculpture. At minimum, you’ll want to explore the Art Deco fixtures of this gorgeous Neoclassical building, which contains yet more Rivera murals. The best views of the Palacio can be had from the café on the top level of Sears across the street. Just remember to order something while you admire the view. Homes of Kahlo, Rivera, and Trotsky

Several standout museums are now curated in the homes of famous former Mexico City residents. The most famous is the Casa Azul, where visitors swarm in to learn about and admire the personal effects of Frida Kahlo. If you’re visiting independently, arrive early to beat the crowd, ideally with a pre-booked ticket in hand. Your ticket also includes admission to the Diego Rivera-designed Anahucalli Museum, which houses Rivera’s collection of pre-Columbian art. Don’t get these confused with the Diego Rivera and Frida Kahlo House Studio Museum, a separate pair of bridge-connected houses where the couple lived and worked that is also open to visitors. The Leon Trotsky House Museum, where the Russian revolutionary lived up until his assassination, is less than 10 minutes’ walk from Casa Azul. It’s an easy and fascinating diversion if you want to escape the crowds paying tribute to Frida. 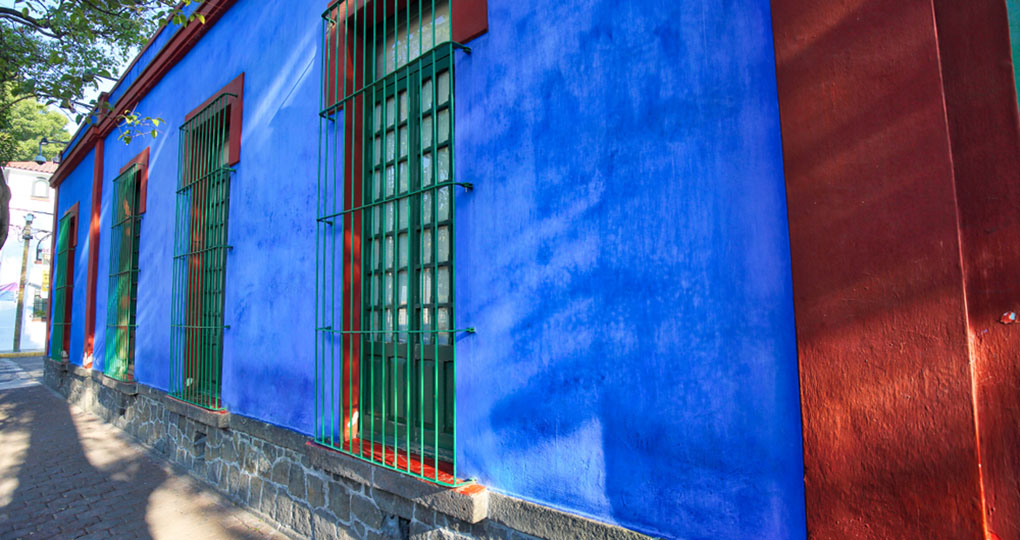 We could fill this list a dozen times over with Mexico City’s art museums, theatres, and cultural institutions. If you only have time for one or two, consider the Somaya Museum, which houses 66,000 pieces of European and Central Ame8rican art, the Museum of Popular Art, the Digital Culture Centre beneath the controversial Estela de Luz, and the Dolores Olmedo Museum. Prominent local businesswoman Olmedo donated her private art collection in the 1960s, including 6,000 pre-Columbian figurines, a smattering of 20th century paintings (including Kahlo and Rivera) and some of her personal possessions. Film buffs shouldn’t miss a visit to Cineteca Nacional de Mexico, both for its innovative architecture, and the attached National Film Museum, a must for fans of Mexican cinema. 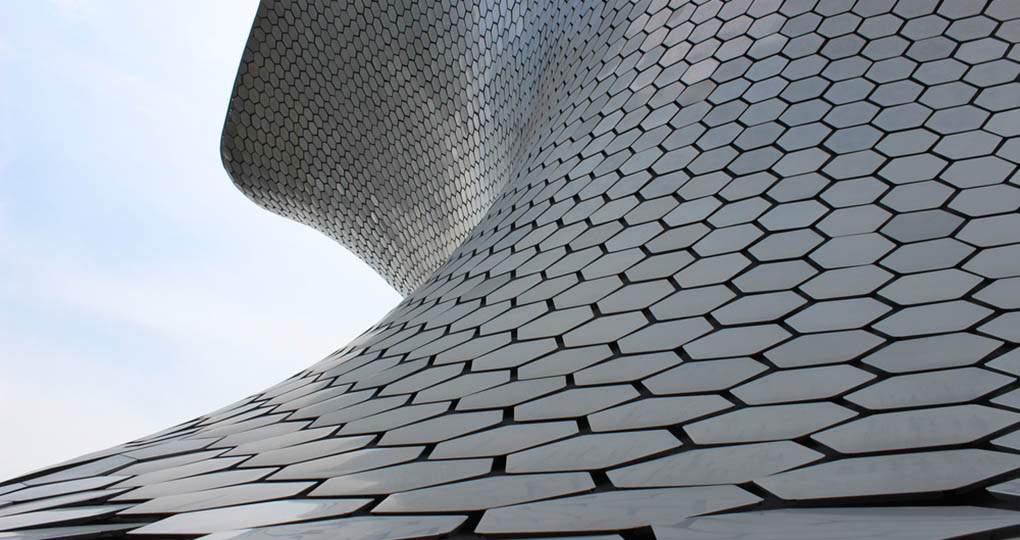 You’re in one of the tastiest capital cities in the world, so don’t miss the flavours on its streets! Be bold and look for a queue of locals, which usually signals some tasty (and safe) treats. These might include crispy, chocolate dipped churros, blue-corn tlacoyos, steamed tamales, more varieties of tacos than you can hope to try in one trip (but by all means, try as many as possible), and finally, chilaquiles. A humble bed of tortilla chips smothered in a variety of toppings and sauces, Mexico City’s staple breakfast isn’t the healthiest option, but it serves up an explosion of flavour and can be found across the city. Even if you’re not a wrestling fan, there are those who claim you’ve never been to Mexico until you’ve experienced the over-the-top gestures, colourful masks, and all-round ridiculous fun of a lucha libre match. The night is more about theatrics than athletics, and there are clear roles and characters that wrestlers assume and cultivate throughout their careers. Low prices have also kept the sport accessible, making it one of the country’s most democratic nights out. Arena Mexico is where the action happens in Mexico City, and you probably won’t have to stay for the whole show to feel like you’ve gotten your money’s worth. 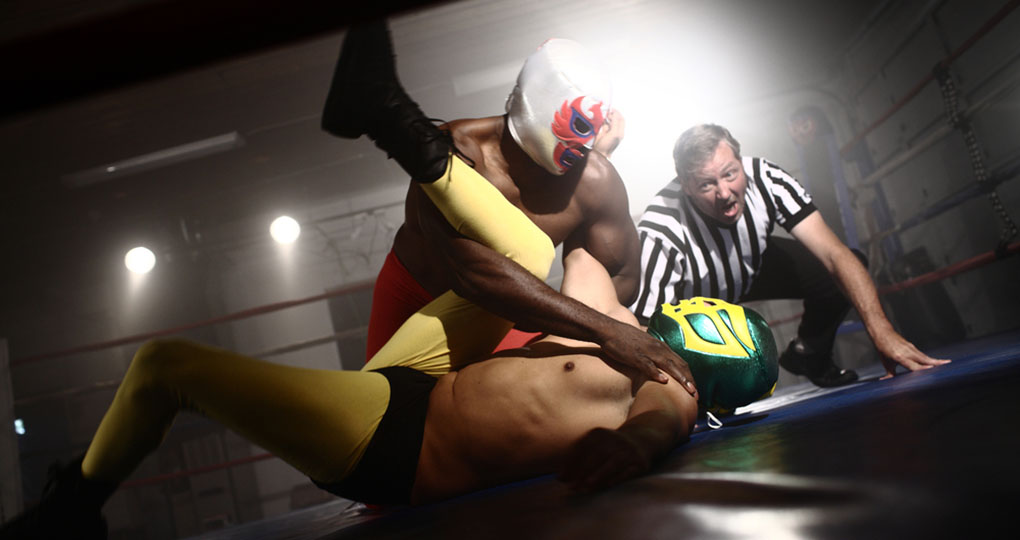 Also known as San Juan Teotihuacan, one of the most important ruins in Mexico is found just 40 kilometres (25 mi) from Mexico City. Meaning ‘birthplace of the gods,’ Teotihuacan is famous for the enormous Pyramid of the Sun and the Pyramid of the Moon, both of which overlook the 5 kilometre (3 mi) Avenue of the Dead. These incredible monuments far predate the Aztecs who found and renamed them, however. While the Aztecs settled Teotihuacan only in the 1400s, and the Toltec civilization before them, the city is believed to predate the birth of Christ by some 400 years. While its origins remain a mystery, the awesome spell it casts on visitors is easier to understand. Teotihuacan is a must visit for any first-time visitor to Mexico City. 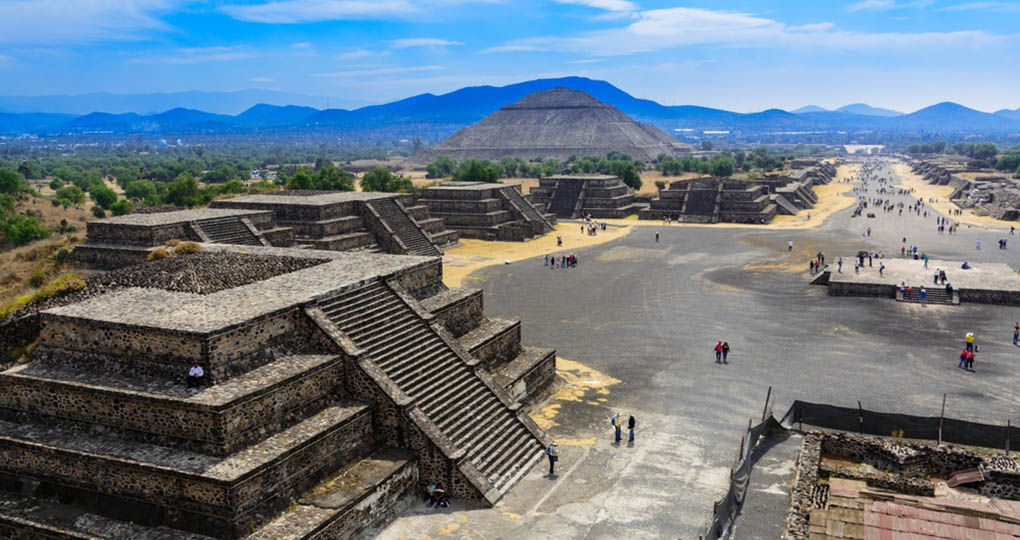 While it’s expensive compared to many parts of Mexico, most Americans and Canadians will find Mexico City to be one of the world’s best value city breaks. Most of the top attractions and museums are extremely affordable, though it can be worth investing in a good quality guide for trips to Xochimilico and Teotihuacan. Expect local, everyday meals to be around 90 MXN, while a mid-range, 3-course dinner for two will be closer to 500 MXN, though dining in trendy or touristy areas can significantly raise prices. A draught of local cerveza (beer) pours for around 40 MXN. Carry cash, since many local businesses will not accept cards.

Mexico City is nowhere near as dangerous as some believe, though petty crime is a significant problem. Dress well, but simply, keep your wits and valuables about you, and never leave an opportunity open to thieves. Avoid cabs on the street. Have your hotel/restaurant/bar call you a cab, or order an Uber instead. Mexicans love to hear how much you’re enjoying their country. Greet the locals with an enthusiastic handshake and a warm mucho gusto to say you’re pleased to meet them. If you’re lucky enough to be invited to a Mexican home, bring a small gift and… try to be at least a half-hour late. This is one of the few countries where arriving on time seems rude, or at best, too eager. Keep your hands in view while eating, resting your wrists on the table, wait for your hostess to begin eating before you do, and if there are any toasts to be made, let the men give them. Machismo culture is extremely dominant in Mexico, and solo female travellers may hear the odd unwelcome remark. These usually have more to do with the admirer’s pride than harassment or intent, but carrying yourself with quiet confidence will help keep things to a minimum. If you do ever feel threatened, don’t hesitate to seek help.

Resources for brushing up on your Mexican Spanish are readily available, and a few key phrases will definitely help you on the streets of Mexico City. Younger people are more likely to speak English if you need help. Up to 100 Native American languages are also thought to be in use throughout Mexico, serving as the primary language of over one million Mexicans.