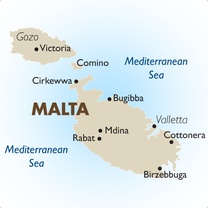 Malta is made up of an archipelago of seven islands in the Mediterranean Sea and is located 80 kilometres/50 miles south of Sicily. Although it is an archipelago, only the three largest islands of Malta, Gozo and Comino are inhabited.  Its strategic location meant that it was occupied by many civilizations which included the Romans and the British over time. Malta gained its independence in 1964. Valletta is a harbour city which has preserved much of its original 16th-century architectural heritage.

Because of its warm climate, it is a popular tourist destination. It does have other attractions which include its history and architectural and historical monuments including nine UNESCO World Heritage Sites. The official languages are Maltese and English and Italian is also widely understood and spoken. Virtually all Maltese citizens speak English fluently.

Valletta, the capital has a rich history. It is modern, with good shopping and also offers many museums and cultural sites. Of particular note is St John's Co-Cathedral, built by one of the earlier Grandmasters of the Knights Hospitaller. It contains Caravaggio paintings, tapestries and various relics of immense value. The floors of the Cathedral are the tombs of the most famous knights of the Order of St John. The Hypogeum of Ħal-Saflien, is a subterranean structure that dates back to 3300-3000 BC in Maltese prehistory and is located in Paola, Malta. The Hypogeum is thought to have been originally a sanctuary, but it became a necropolis in prehistoric times, and in fact, the remains of more than 7,000 individuals have been found here. It is the only known prehistoric underground temple in the world.

Sliema is Malta's most modern and most built-up area and where most tourists stay.  It is a vibrant town and all amenities are within walking distance. Sliema and nearby St Julian's form a near continuous town spread over two adjacent peninsulas. The seafront is well developed and offers an array of cafes, bars and restaurants and some stone beaches with safe and clean swimming areas.

Elsewhere on the main island is the ancient capital of Mdina, also known as the Silent City. The history of Mdina traces back more than 4000 years. It was here that in 60 A.D. that the Apostle St. Paul is said to have lived after being shipwrecked on the Islands. Mdina is fascinating to visit for its timeless atmosphere as well as its cultural and religious treasures. It is one of Europe's finest examples of an ancient walled city and extraordinary in its mix of medieval and baroque architecture.

Nearby is the scenic town of Rabat with its fortress which offers attractions such as its architecture, history and an amazing view from the fort. Rabat is home to the famous Catacombs of St. Paul which were used in Roman times to bury the dead. In the Catacombs of St Agatha's, there are over 500 graves of several types.

At Goway we believe that a well-informed traveller is a safer traveller. With this in mind, we have compiled an easy-to-navigate travel information section dedicated to Malta.

Learn about the history and culture of Malta, the must-try food and drink, and what to pack in your suitcase. Read about Malta's nature and wildlife, weather and geography, along with 'Country Quickfacts' compiled by our travel experts. Our globetrotting tips, as well as our visa and health information, will help ensure you're properly prepared for a safe and enjoyable trip. The only way you could possibly learn more is by embarking on your journey and discovering Malta for yourself. Start exploring… book one of our Malta tours today!