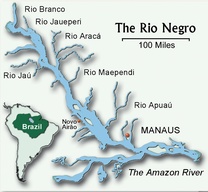 Voyage to the Heart of the Amazon is different from all other cruises offered in the Amazon. It is an "expedition cruise". We go far into the forest and are able to see creatures that are hidden to other visitors. We explore some of the most untouched rainforest in all of the Amazon. The voyage begins in Manaus, Brazil and over eight days the Motor Yacht Tucano navigates far up the Rio Negro [pronounced NAY-GRO]. In the daytime and often at night we seek out the wildlife that still lives in the world's greatest of wilderness. There are very few settlers so the plants and animals are still abundant.

This river cruise travels through the only UNESCO World Heritage listed site within the Amazon. For more information about the Central Amazon Conservation Complex, visit UNESCO.

WHEN TO VISIT THE BRAZILIAN AMAZON

The high season, with more tourists, are July-September and December-January. These periods are within the low water season (July-February), and have significant advantages for your Amazon tours: less rain, less mosquitoes, easier observation of aquatic life in lakes, better time for fishing or swimming.

But there are some disadvantages also: temperatures are higher (especially before December), some waterways are more clogged with vegetation, limiting access to wildlife zones; the forest life is less visible except for aquatic life in isolated lakes (the best period for viewing wild life, in Manaus region, is March - June; this is also a cooler period, and a nicer one for your Amazon tours: waterside plants such as acacias, morning glories, or cecropias, flourish at these months.

Some people prefer transitional periods (October and November; and May and June, in the region of Manaus), where you may have some advantages of the rainy and the dryer periods. But there aren't true rules on that issue. For most people, the more determinant factor is the rain. December to May period can have many rainy days, and that can spoil many planned Amazon tours.