Nepal: Things to do

Every country has its outstanding and special attractions. Goway has selected its Top 14 things to do in Nepal (not in any particular order) for you to enjoy on your visit to this destination. 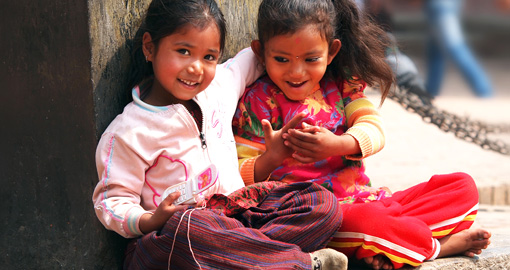 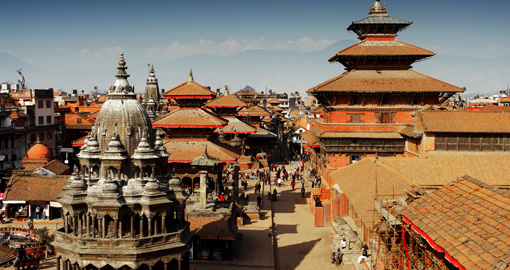 The central attraction in Kathmandu, on a Nepal vacation, is Durbar Square which is in the heart of the old city. The entire square was designated a UNESCO World Heritage Site. Durbar means royal palace. The old Royal Palace from the days when Nepal was a kingdom is located here. The style of the palace is a mixture of eastern and western architecture. In Durbar Square and the surrounding area are around 50 temples. This includes the Taleju Bhawani Temple built in 1564, the square’s most magnificent temple and dedicated to a goddess of the same name from Southern India. It is open to the public only once a year during the Dashain Festival which lasts 15 days at the end of September through to early October. Dashain commemorates a great victory of the gods over the wicked demons and is celebrated throughout Nepal. 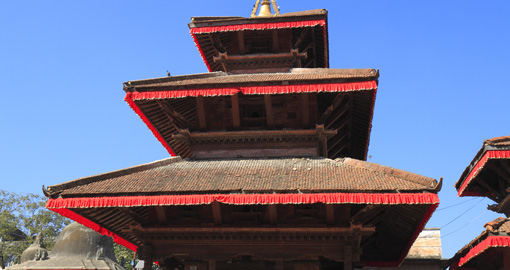 This is an important temple in Kathmandu, built in the 16th Century and known for the erotic figures carved on its wooden struts. The palace itself is divided into two courtyards, the outer and inner. The most important complex in the inner courtyard is the Hanuman Dhoka which was the royal Nepalese residence until the 19th Century and was where important ceremonies such as the coronation of the Nepalese king took place. It is possible to visit the state rooms inside this building. It is also home to the King Tribhuwan Memorial Museum which showcases the entire history of this king's life (1903/1955) and the Mahendra Museum which showcases his son who succeeded him (!920/1972). 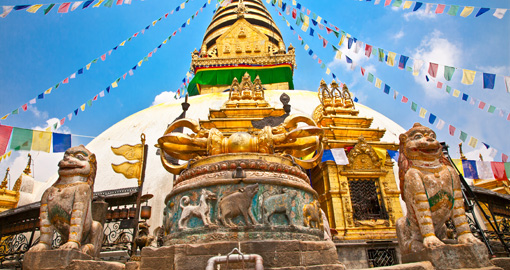 Located 3 kilometres/2 miles outside of Kathmandu, this is the holiest Buddhist temple on a trip to Nepal. It is the oldest of its kind in the country dating back to the 13th Century. It is situated on a hill overlooking the city offering panoramic views of the surrounding area. It is also known as the “Monkey Temple” due to the large number of monkeys who inhabit it. There is a gleaming white stupa which is topped by a gilded spire painted with the eyes of Buddha. You will see Buddhist devotees each morning and evening who come to spin the prayer wheels. It is also a great place to watch the sunset. 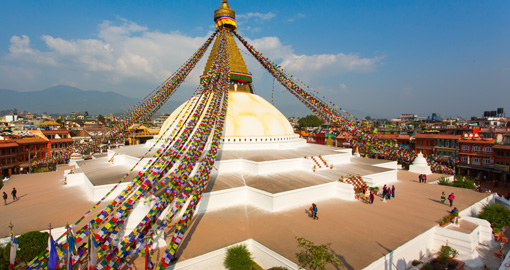 The Boudhanath Stupa is located 7 kilometres/4 miles outside Kathmandu and is the largest Buddhist stupa in the world. It was built in the 5th Century AD. It attracts thousands of pilgrims daily who conduct the ritual of walking three or more times around the stupa while repeating a mantra. It is a colourful sight as Tibetan monks in maroon robes also wander around the stupa. The laneways around the stupa are full of monasteries and workshops producing butter lamps, ceremonial horns, Tibetan drums, monks’ headgear and the other accessories of Tibetan Buddhist life. Boudhanath is a fascinating and very spiritual place. 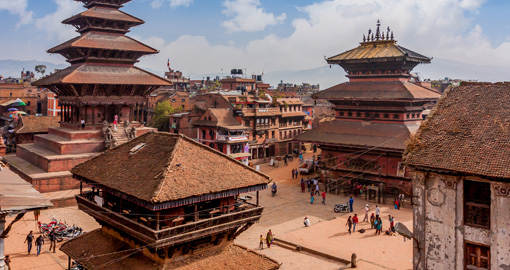 This is the second Durbar Square situated 13 kilometres/8 miles east of Kathmandu to visit on Nepal tours. It is again a temple complex combining different styles of architecture. It has some fine sculptures and woodcarvings. The temples are situated around a palace made of brick and wood. The Bhaktapur Durbar Museum has an exhibition of the traditional art of Nepal such as local products, pottery etc. The 55 Window Palace dating back to the 15th Century has some excellent woodcarving. The Art Gallery houses ancient paintings representing the Hindu and Buddhist faiths. 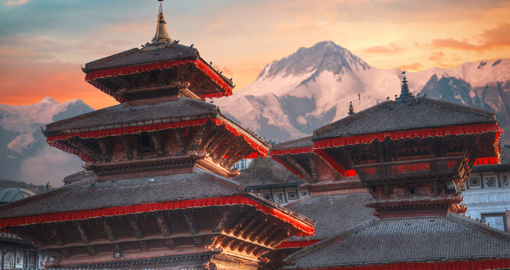 This is the third Durbar Square located in the centre of the city of Lalitpur, 5 kilometres/3 miles south of Kathmandu in the Kathmandu Valley. The square is full of ancient palaces, temples, and shrines noted for their exquisite carvings. The ancient Royal Palace of Patan faces on to the beautiful Durbar Square. There is a very large and impressive mass of temples, a visually stunning display of what is called, Newar architecture which is typically Nepalese. It is the oldest of the three Durbar Squares and was unfortunately, heavily damaged during the earthquake that occurred in 2015. 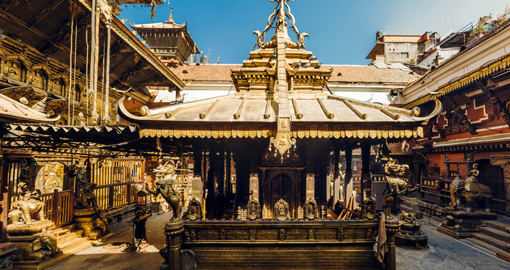 This unique Buddhist monastery is just north of Durbar Square and dates back to the 15th Century. Its name is derived from the gilded metal plates. The temple itself is a magnificent example of courtyard temple architecture. Two elephant statues guard the doorway and the facade is covered by a host of gleaming Buddhist figures. The main priest of the temple is a young boy under the age of 12, who serves for 30 days before handing the job over to another young boy. This is a town 32 kilometres/20 miles south-east of Kathmandu where you can, on a Nepal trip, enjoy excellent views of the Himalayan Mountains and also experience the ancient parts of the town with its atmospheric narrow cobblestone streets and lanes reminiscent of medieval times. There are many interesting temples to see, some of which are still used for worship by the local people. The Dhulikhel View Tower which is up a hill outside the town offers excellent views of the HimalayasimalayasHi. 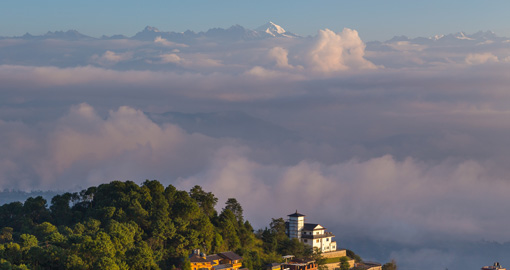 Nagarkot has the reputation for being the best place to view the Himalayas around Kathmandu. It is 32 kilometres/ 20 miles away and is a village with hotels from whose balconies you can take in wonderful mountain vistas. A visit to Nagarkot is best between October and March when you will nearly always be rewarded with mountain views but the mountains are notorious for suddenly disappearing behind clouds at any time. 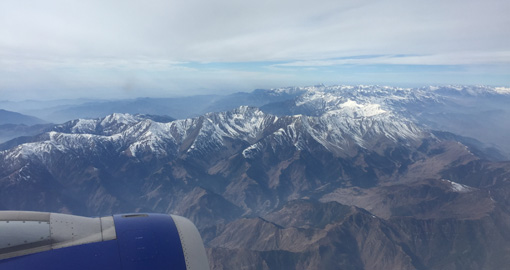 One very special thing to do, on a Nepal vacations, is to take a 1-hour scenic flight high above the peaks of the Himalayas and Mount Everest. You depart by bus from Kathmandu to the airport to join a small plane. You literally fly over the 29,029-foot/8,848-metre high Mount Everest. A pilot provides a narration during the flight about the significance and the names of the various summits. You can take photos from the window of the plane. There is a large amount of wildlife in Nepal hand Chitwan National Park is the best place to view it. It was established in 1973, has been given UNESCO World Heritage status and is considered one of the best wildlife viewing Parks in Asia. It is located roughly in the middle of the country in the lowland plains. The type of animals that live there include rhinoceros, leopards, wild elephants, sloth bears, hyenas, wild dogs, mongooses, deer, monkeys and the Royal Bengal tiger. In total, there are around 70 different species of animals. The park also boasts over 500 different bird species. There is no accommodation inside the park itself but there are luxury lodges just outside the park boundaries and there are also less expensive accommodations a little further away. Unfortunately, the dense jungle and tall grass do in some ways limit wildlife viewing. However, one way, on a Nepal vacation, to literally rise above the grassland is to take an elephant safari. This is a beautiful lakeside resort. The lake itself is called Phewa Lake and is surrounded by forests and the snow-capped mountain peaks of the Annapurna Range which reflect in its waters. The views of the majestic backdrop of the Himalayas are sensational. You will find a number of hotels, pubs and bars strung along the shoreline. It is a good place to relax and enjoy the scenery. There are 6 other beautiful lakes in the vicinity of Pokhara which can all be visited and enjoyed. Swimming and boating are two of the main activities. You can visit the International Mountain dedicated to historical documents and chronicles about mountaineering and also about people living in the Himalayas plus descriptions of the 14 highest peaks together with exhibits about famous expeditions. A good place to watch the sunset or the sunrise is at the World Peace Pagoda on top of a hill just outside of Pokhara. This can be done from both Kathmandu and Pokhara when on a Nepal trip and treks can be easy or strenuous depending on your interest and ability. They can be done stopping overnight at what are called Tea Houses which are basically tourist lodges or by sleeping overnight in tents. Usually, most trekkers join a group which includes a guide, porters and full provisions. Treks can be customized to the individual ranging from one day to much longer periods of up to at least 3 weeks. Pokhara is the more popular starting point because of the proximity of the beautiful Annapurna mountain range. This is undertaken by flying from Kathmandu to Lukla which is the start of the trek at 2860 metres/9295 feet. You eventually reach the base camp which is at 5380 metres/17,600 feet. On average, the trek takes 8 days to reach the camp and 4 days to return coming down. It is a good idea to spend a little time in the village of Namche en route to acclimatize to the altitude. Aside from the breathtaking beauty along the way, you will come across villages and monasteries where you can experience typical Sherpa culture.