Thailand: Things to do

What are the top things to do in Thailand? This, after all, is Asia's most popular destination, offering a rich cultural history, famously welcoming locals (it's not called the Land of Smiles for nothing), a compelling reverence for tradition, and some of the most beautiful beaches you'll find anywhere. Then, there's the food! Here are our top picks for things to see and do in Thailand. 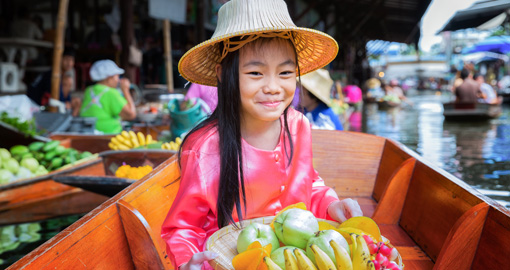 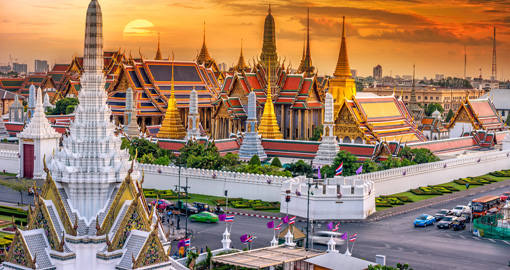 The imposing Grand Palace, situated on the banks of the Chao Phraya River, is Thailand’s most sacred site. It used to be the official residence of the Kings of Siam (and later Thailand) since 1782 until 1925 and is made up of numerous buildings, halls, pavilions set around open lawns, gardens and courtyards. It is still used for official events such as royal ceremonies and state functions. It is divided into two main parts which are the Temple of the Emerald Buddha and the royal residence. The latter is divided into three major parts, the Outer Court, the Middle Court, and the Inner Court. The Grand Palace is currently partially open to the public as a museum, but it remains a working palace, with several royal offices still situated inside. The Emerald Buddha, the sacred Buddha image meticulously carved from a single block of emerald can be viewed here on Thailand vacations. 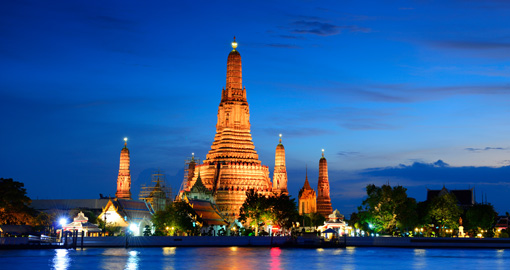 The architecturally beautiful Wat Arun, also known as The Temple of Dawn and situated again on the banks of the Chao Phraya River, is one of the most stunning temples in Bangkok, not only because of its riverside location but also because the design is very different from the other temples in Bangkok. It is partly made up of colourfully decorated spires which sparkle in the sunshine and stands majestically over the water. Despite its name, it is stunning at sunset, particularly when lit up at night. The spire is one of Bangkok's world-famous landmarks, over 70 metres/230 feet high, beautifully decorated with tiny pieces of coloured glass and Chinese porcelain. You can climb the central spire but the steps are very steep. It is an important place of worship for Buddhists so make sure to dress appropriately. You can pick up one of the cover-ups that are for rent near the entrance. 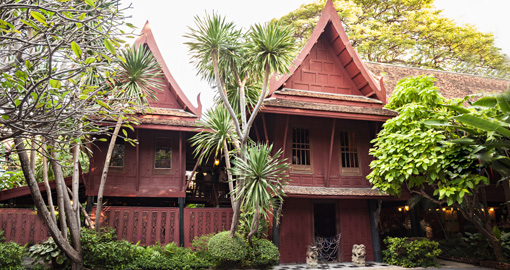 The Jim Thompson House is a museum that houses the art collection of American businessman and architect, Jim Thompson, the museum designer and former owner. It was built in 1959 and is unconventional architecturally. It is a complex of six traditional Thai-styled houses, mainly constructed of wood, and various old Thai structures that were collected from all parts of Thailand in the 1950s and 1960s. He built a large collection of historical Buddhist statues and traditional Thai paintings made of wood, cloth, and paper that depicted the life of Buddha. He has collected secular art not only from Thailand but from Burma, Cambodia and Laos. There is a collection of white and blue porcelain from China from around the 16th and 17th Centuries. 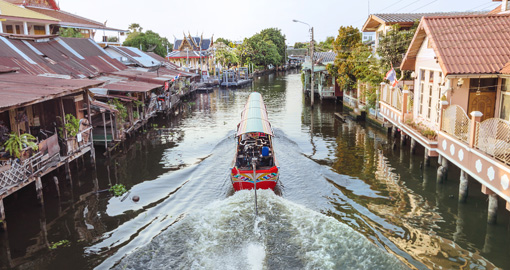 You can, on a Thai vacation, take a cruise on a long-tailed boat through a network of small, narrow canals which are known locally as khlongs hidden away in the centre of the city. The cruise allows you to see sights that are not available any other way such as a temple, a unique art gallery and an orchid farm. You also get to observe activity and daily life of the locals as you pass by simple wooden houses with clothes drying in the sun and perhaps a convenience store. The Artist's House is a beautifully restored old home on a canal that a local artist renovated, in part to preserve the traditional structure and in part to open a gallery and art centre. You can walk around the house and enjoy the paintings, sculptures, architecture and tranquil atmosphere. 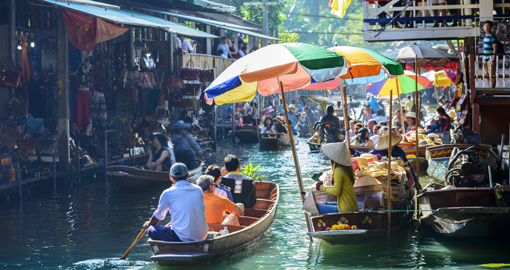 The Damnoen Saduak market is about one hour’s drive from Bangkok situated in a small town. Most visitors on trips to Thailand join a long-tailed boat that takes them to the market which is active among narrow canals with wooden houses on stilts on the banks. When you arrive at the market, you will see fruit and vegetable sellers rowing up the canals delivering their goods to the locals. The market is open every day from around 6.30 am to 11.00 am. The Floating Market is always crowded with vendors floating in their small boats selling agricultural products and local food which are mostly brought from their own nearby orchards. 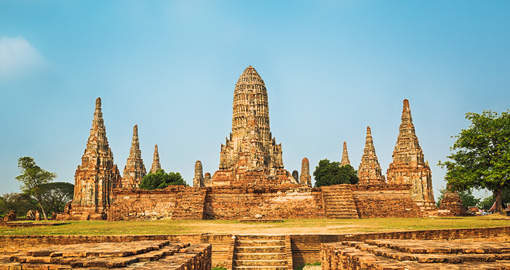 Ayutthaya is an ancient capital 85 kilometres/53 miles north of Bangkok. Founded around 1350, Ayutthaya became the second capital of Siam after Sukhothai. By 1700, Ayutthaya had become the largest city in the world with a total of 1 million inhabitants. When it was invaded by the Burmese in 1767, it was almost completely burnt to the ground. Today, what remains are some temples and palaces which were made of stone. This UNESCO World Heritage site, which is actually an island, has 67 amazing temples and ruins with a number of imposing Buddha statues. An example is the Wat Phra Sri Sanphet, which means “Temple of the Holy, Splendid and Omniscient and was revered as the grandest and most beautiful temple comprised of three ancient chedis, or chapels, these ruins. The architecture is breathtaking. 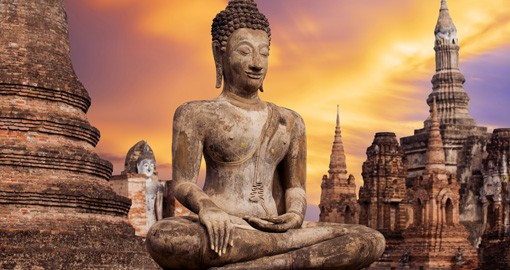 Sukhothai translates as "the dawn of happiness" as the Sukhothai (Rising of Happiness) Kingdom flourished from the mid-13th Century to the late 14th Century. This period is often considered the golden age of Thai civilization. The remains of the kingdom feature partially rebuilt ruins, making it one of the most visited ancient sites in Thailand. It is situated among some peaceful hills. The temples and monuments have been restored and the Sukhothai Historical Park is a UNESCO World Heritage site with its 190 historical ruins. Highlights include the Wat Phra Pai Luang, believed to be the original foundation site of the Sukhothai Kingdom. This temple offers a combination of Khmer and Lopburi architecture dating back to the early 13th Century, The Wat Mahathat was the spiritual centre of the Sukhothai Kingdom and the most photographed with its giant seated Buddha image behind rows of half-collapsed columns. 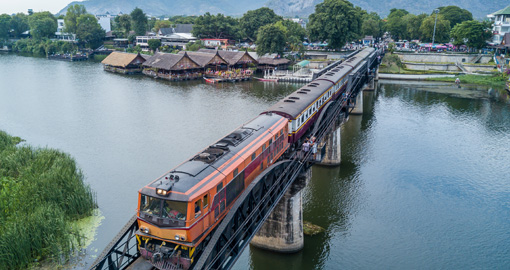 The River Kwai is mentioned in the famous movie “Bridge over the River Kwai”, a movie about a moving experience which took place during the Second World War. The largest town is Kanchanaburi which is 130 kilometres/80 miles west of Bangkok. On Thailand vacations, you can visit for a day or really enjoy the tropical surroundings by staying overnight as there is plenty to see. The actual bridge can be walked on the wooden planks but watch out for passenger trains when one comes along. The bridge was part of the Death Railway linking Thailand with Myanmar (Burma) built by allied prisoner-of-war under Japanese supervision The Kanchanaburi War cemetery contains the remains of almost 7000 allied POW's who perished during the construction of the Death Railway. Another cemetery was built on the site of a former Prisoner of War Camp. It contains the graves of around 1700 POW’s. The War Museum has a collection of war instruments, photographs, uniforms, etc. There are other attractions in the area. The Erawan Waterfall is one of Thailand’s prettiest and worth visiting. You can enjoy a breathtaking ride on a traditional long-tailed boat on a 2-hour trip which takes in a number of the highlights of the area. You might want to consider a very special experience by staying at the River Kwai Jungle Rafts Resort. It offers unique accommodation right on the river. All floating rooms are tucked into a floating bamboo lodge moored along the river surrounded by lush green mountains and jungle. 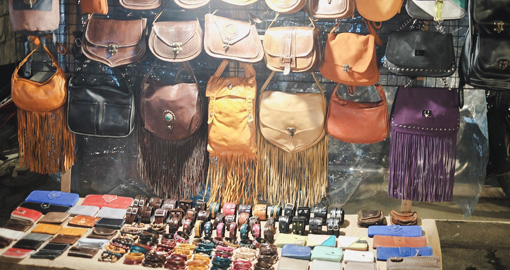 Chiang Mai is a shopper’s paradise and there are plenty of bargains in the famous Chiang Mai Night Bazaar. The Night Bazaar is approximately 1kilometre/half a mile long. It is open every day of the year regardless of the weather from dusk till around midnight. As the sun sets over Chiang Mai, all the street vendors turn up and load their goods on to their stalls. You will probably see the same vendors in the same spot every night. There is a huge variety of brand name designer goods (real and fake) (clothing, T-shirts, belts, shoes, jewellery, watches, DVD's & CD's) and local Thai goods at really low prices. Remember to bargain for your purchases as it is expected and is all part of the fun. There a number of mobile food street stalls for a quick snack. Even if you do not want to buy anything, a stroll up and down the Night Bazaar is an amazing experience. 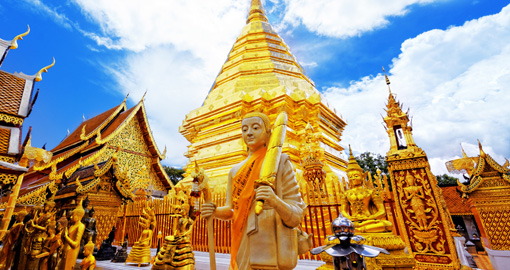 This temple is located near the top of Doi Suthep (Mount Suthep) situated 15 kilometres/9 miles from Chiang Mai. It was built as a Buddhist monastery in 1383 and is still a working monastery today. The architecture, statues, murals and shrines here are breathtaking. You start with either a walk up 300 steps of the Naga Serpent Staircase or take the elevator. At the top, there is a golden spire and walls decorated with historical murals and shrines. There is a large viewing terrace which houses one of the world’s largest gongs and which makes a rich sound when struck. From here, you have terrific views down over Chiang Mai, weather permitting. 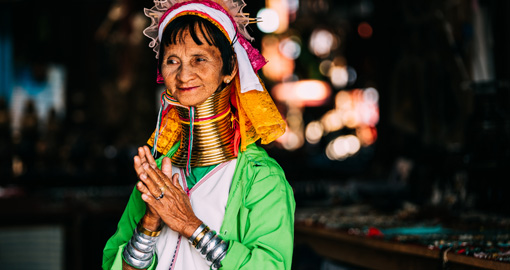 When in Northern Thailand, particularly the Chiang Mai region, you can visit a hill tribe village. They are groups of ethnic minorities who crossed over into Thailand from Myanmar and Laos and are numerous in this region. There are seven main hill tribe groups in Thailand. Because of their colourful, traditional dress and dramatically elongated necks adorned with brass rings, the Karen people from Myanmar have long been considered an attraction. If you visit a village, you will be asked to buy handicrafts made by these minorities. Each hill tribe group has its own unique language, customs, and culture. In general, the best tours are the ones where you go in small groups and stay in the villages themselves. These home stays are almost always very "rough" by Western standards. 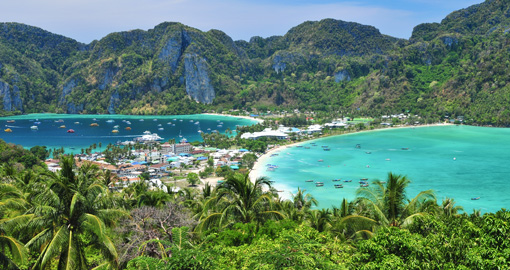 Phi Phi was where the movie “The Beach” was filmed. It is considered one of the most naturally beautiful islands in Thailand with its coral, long white sandy beaches and backdrop of limestone mountains with sheer cliffs. It is easily accessible from Phuket as it is only 50 kilometres/31 miles in the Andaman Sea reached by ferry. There is no public transportation in Phi Phi which is made up of several islands but only two which are really important, Phi Phi Don and Phi Phi Leh. All accommodation is on the main island of Phi Phi Don which is the only island that is populated. The central area of Phi Phi Don is the liveliest place with many hotels, restaurants, bars and shops suiting all budgets for visitors on a Thailand vacation. Some of the activities available are scuba diving, snorkeling, swimming and pleasant walks along the coastal path with its coconut trees overlooking a turquoise sea. Totally uninhabited except for visitors during the daytime, Phi Phi Leh lies off the southernmost tip of Phi Phi Don. It offers a wonderful combination of small sandy beaches, coral reefs and vertical cliffs. 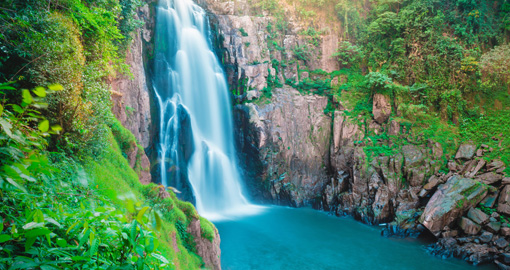 Khao Yai is Thailand's oldest and most visited national park. It incorporates one of the largest monsoon forests in mainland Asia, which is why it was named a UNESCO World Heritage site. However, despite its size, it is one of the easiest national parks in Thailand to get around. More than 80% of the park is forested and has a rich diversity of plants. There is plenty of wildlife with at least 70 species of animals and over 300 bird species. A major attraction is the spectacular waterfalls. There are several viewpoints from which to observe some of the animals as well as the surrounding scenery. You can visit bat caves, go trekking and take a night safari.