Things to do in Brazil

Every country has its outstanding and special attractions. Goway has selected its Top 12 Things to do in Brazil (not in any particular order) for you to enjoy on your visit to this destination. 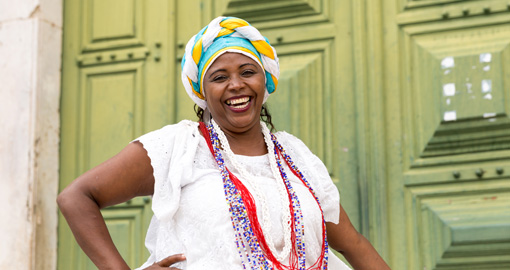 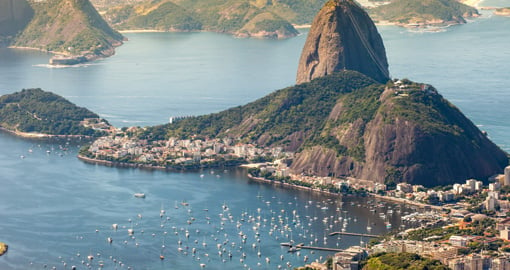 Sugar Loaf Mountain is a rounded rock peak at the mouth of Guanabara Bay on a peninsula that juts out into the Atlantic Ocean. It gets its name from the resemblance to the traditional shape of concentrated refined loaf sugar. It is 395 metres/1135 feet in height and towers above the beaches and city. It reached by cable cars, first from the ground to Morro da Urca on the lower peak and then by a second cable car to the upper peak. The panoramic views are spectacular of the surrounding area to be experienced on Brazil tours. 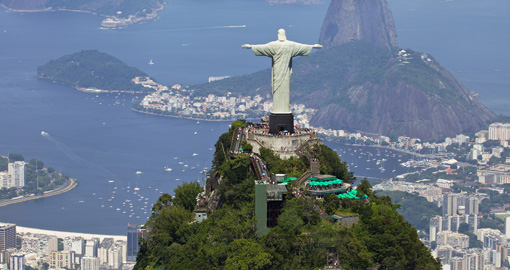 This is a site which is very hard not to miss wherever you go in Rio on Brazil vacations. This is the backdrop to the city and rises up from the ocean to a height of 700 metres/2280 feet. On its summit is the enormous and iconic statue of Christ the Redeemer which, in itself, is 30 metres/100 feet in height. The statue of Christ has him stretching out his arms to an overall length of 28 metres/90 feet as if welcoming the world. The views of the city and the coastline are absolutely spectacular. You can see all the famous beaches such as Ipanema and Copacabana plus Sugarloaf Mountain and the Maracana Soccer Stadium. There are several ways of reaching the top of Corcovado? You can climb up which is challenging, you can take a bus to the back of the mountain and walk up or take an organized sightseeing tour. Corcovado is located in part of the Tijuca National Park which is a huge forest with springs, waterfalls and a wide variety of tropical birds and plants. This is a very colourful annual event which takes place in Rio prior to Lent. It is extremely well-prepared and a magnificent showpiece. It is held from the Friday before Ash Wednesday until that day when Lent begins before Lent which is 6 days. On the Sunday and the Monday, spectators watch the parades of competing samba dancers from a purpose-built stadium designed by Brazil's best-known architect, Oscar Niemeyer. This is the Sambadrome where grandstand boxes provide ringside seats to a 700-metre parade route where dancers and musicians from the competing samba schools do their thing dressed in dazzling costumes. During Carnival time, samba music can be heard coming from neighbourhoods throughout the city and crowds gather to dance and play all day and night. 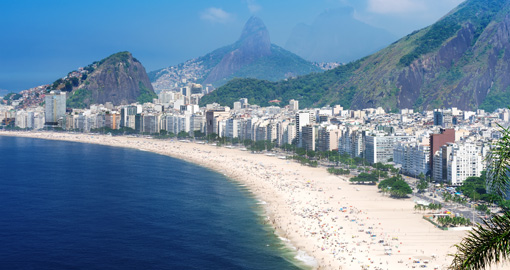 Rio is famous for its numerous beaches which are strung along the coastline of the city, each one separated either by district or confined to their own bay. Some are lively and others ideal for a peaceful sojourn. All are, in their own way, stunning with the mountains as their backdrop. The best-known is probably Copacabana in downtown Rio’s most fashionable and famous neighbourhood with its many upscale hotels and restaurants. It is extremely active with both locals and visitors enjoying the sand and the sea. 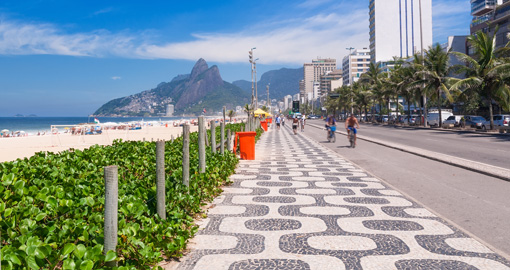 Possibly just as well-known is Ipanema which is adjacent to Copacabana and which became famous through the Bossa Nova song, “Girl from Ipanema”. The beach attracts both sunbathers and surfers. It is located in one of Rio’s most exclusive neighbourhoods replete with upscale restaurants, cafes and shops. The beachfront is always busy with people riding bikes, rollerblading, skateboarding or simply strolling. 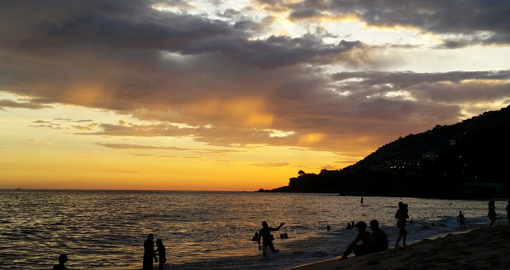 Leblon, located next to Ipanema, is regarded as being the most expensive residential area in Latin America. However, the beach is free! It is known as a cosmopolitan neighborhood with a lively nightlife and a good choice of restaurants, clubs and bars.

Other beaches include Barra da Tijuca, the longest beach at 17 kilometres/11miles in length. It attracts both families and water sports enthusiasts, Prainha which is set in beautiful natural landscapes offering a stretch of sand with an impressive backdrop of jungle-coated mountains and Joatinga which is small and has the cleanest water in Rio de Janeiro attracting surfers and people who just want to get away from the city’s more hectic beaches. 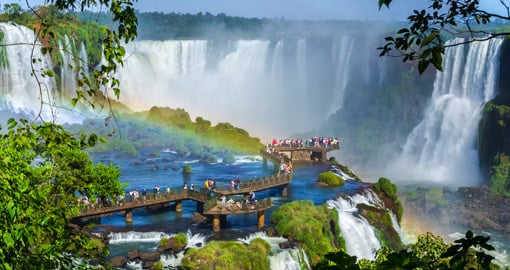 This spectacular waterfall is shared by three different countries – Argentina, Brazil, and Paraguay. It is 2.7 kilometres/1.7 miles long and has 275 individual water cascades. Iguassu Falls has the largest average annual flow of water, more than any other waterfall in the world. It is recommended to spend at least a day on each side of Iguassu on Brazil tours. The most impressive part of the falls is called “Devil’s Throat,” shared between both sides. It is a U-shaped cataract and half the river’s flow falls into it. You will see a huge amount of mist which can be seen from afar, and hear the roar of the water pouring down. You can take a train running along the Argentinean side to where the mist and the roar are the most spectacular. Also, you can walk to Devil’s Throat and take a boat ride underneath the falling waters. While the falls are farther away, you can get a better overview of them from the Brazilian side. From virtually every angle, the views are definitely more panoramic. You can consider the 10-minute helicopter ride from the Brazilian side. What you get is a bird’s eye view of not only the falls but also the surrounding rainforest. 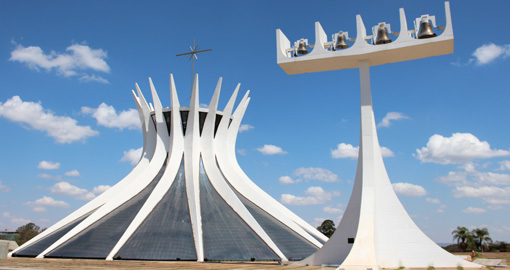 Brazil's capital city, Brasília, was carved out of the jungles and completed in less than three years in 1960 when it became a showpiece of city planning and avant-garde architecture. Without the usual mix of residential and business districts, the entire government section of Brasilia is composed of major architectural highlights. These include the presidential palace, the Supreme Court and the two sharply contrasting congress buildings plus the Historical Museum of Brasília and the Pantheon of Freedom designed by Oscar Niemeyer. That architect's best-known building in the city is the circular Metropolitana Nossa Senhora Aparecida Cathedral. Another of Niemeyer's works is the Palacio dos Arcos which houses the Foreign Ministry and is surrounded by beautiful gardens. Memorial dos Povos Indígenas (Museum of Indigenous People) has an outstanding collection of native Brazilian art. The Brasilia TV Tower is a good place to get an interesting view of the city with its observation deck. 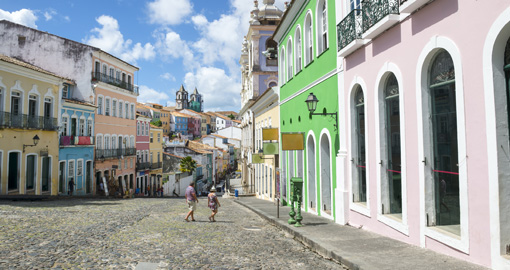 The upper town of Salvador, Brazil's former colonial capital and principal port for slaves arriving from Africa, is a UNESCO World Heritage site due to its exceptional collection of 17th and 18th Century colonial buildings, the finest in South America. Called the Pelourinho, this old quarter is where you will find Salvador's most beautiful churches and monasteries built at a time when Brazil was the source of Portugal's riches and gold was lavished on the colony's religious buildings. The finest and most opulent of the city's churches is Sao Francisco built in the early 1700s and filled with intricate carvings covered in gold. An African influence is to be found in Salvador's music, festivals, and cuisine. The upper and lower towns are linked by steep streets and a number of elevators and a funicular which has become a landmark in Salvador. From the terrace formed by the upper plaza, Praca Tome de Souza, there is a superb view of the lower town and the harbour.

The Amazon River, Jungle, and Rainforest 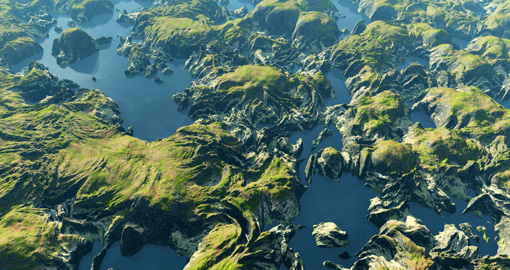 The Amazon Rainforest accounts for more than half of the world’s remaining forests and 20 per cent of the world’s oxygen. One in 10 known species in the world can be found in the Amazon region, home to around 2.5 million insect species, tens of thousands of plants, and thousands of birds and mammals. Many areas in the jungle are difficult to get to and some are still unexplored. The villages along the river or in the jungle are mostly untouched by modern lifestyles. The people stick to traditional ways of living. In these villages you will find medicine men, healers, shaman, and witch doctors. On Brazil vacations, you can take a cruise starting from Manaus. Situated in the heart of the rainforest, Manaus is the largest city in the Brazilian Amazon and is located on the Rio Negro a few miles before it meets the Rio Solimoes to form the Amazon River, properly called the “Meeting of the Waters.” This will be one of the highlights on your cruise. You can choose various types of cruises depending on your taste and budget. From small motorized canoes and speed boats to 5-star luxury ships, these are all available. Try to spend some time in Manaus itself, with its famous Manaus Opera House built during the heyday of the rubber trade and where many famous opera divas and maestros performed. 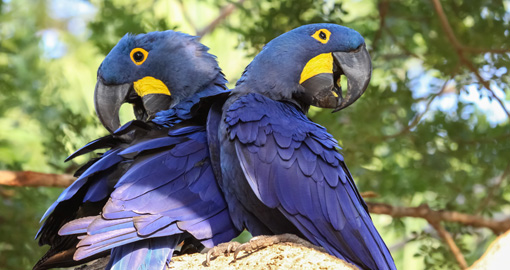 The Pantanal is the world’s largest wetland consisting of forests, lakes, and grasslands. It also spreads over into Paraguay and Bolivia. The flooded marshlands teem with everything from piranhas to jaguars and crocodiles. This is a place for nature lovers. The region’s protected areas include the Pantanal Matogrossense National Park and three private nature reserves where you can have the opportunity to view wildlife go on safari, go swimming and take canoe trips. The Pantanal is home to approximately 3500 known plant species, with more being discovered on a regular basis. This is the capital of the state of Minas Gerais which had its heyday during the colonial period which is evident from the interiors of the churches in Ouro Preto. Entire walls are awash in gold along with diamonds from the mines surrounding the city in the 17th and 18th centuries. Ouro Preto has steep narrow streets lined by gracious colonial mansion and white churches and a mountain backdrop setting. The entire town is so rich in colonial architecture that Ouro Preto has been named a UNESCO World Heritage site. Fortaleza is located in northeastern Brazil on the Atlantic Ocean and is one of the largest cities in Brazil. It is famous for forro music and dance which are a fusion of European, African and native influences. The Metropolitan Cathedral of Fortaleza has nice mosaics, and its high towers and its size (its capacity is 5000 persons) are impressive. The Museum of Art and Popular Culture is located in an old prison and has displays of many good examples of folk art as well as boats and cultural relics. Fortaleza has around 25 kilometres/16 miles of beaches with each one having its own characteristics. The best two are Praia de Iracema and Meireles. One thing worth seeing is the sunset from Praia Iracema. Recife has been nicknamed the “Venice of Brazil” due to the number of picturesque waterways that criss-cross the city. Because of its proximity to the equator, the weather is generally warm and due to the cool sea breezes never gets too hot. Recife is a major tourist attraction in northeastern Brazil both for its beaches and for its historic sites dating back to the Portuguese and the Dutch colonization of the region. The beach of Porto de Galinhas, south of the city, has been repeatedly awarded the title of best beach in Brazil. The historic centre of Olinda just north of Recife is a UNESCO World Heritage site. It is a colourful place to visit on Brazil vacations with its pastel-coloured houses and quaint colonial churches and its proximity to the ocean. It is extremely photogenic with its narrow cobblestone streets. There is an open-air living museum and everywhere you look are picturesque churches. Founded in the 16th Century, Olinda was the original capital of the Pernambuco province and formerly one of the most powerful and influential cities in Brazil.