Things to Do in Rio de Janeiro 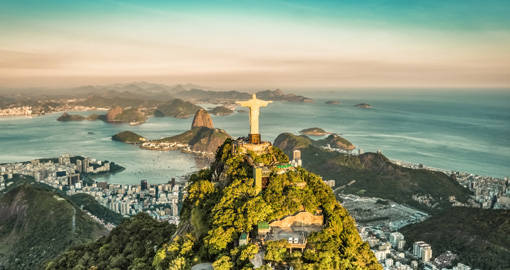 The Marvelous City, capturing all that is Brazil in the world’s imagination, Rio de Janeiro is a destination like no other. Imbued with the fire and energy of centuries of history, all rising in one of the world’s most beautiful natural locations, here are some Rio de Janeiro icons you should not miss.

The Corcovado and Cristo Redentor

Overlooking Rio with arms outstretched, Christ the Redeemer brings together the city’s faith and beauty in one spectacular image. The Corcovado on which it stands is one of Rio’s highest peaks, over 700 metres above sea level. Since 1884, the Corcovado Rack Railway has taken sightseers (and in its early days, locals) to the summit. Cristo Redentor was finished in 1931, and defines the mountain as it’s seen today. There’s simply no better view of Copacabana and Ipanema Beaches, Pao de Acucar, downtown, Maracana Stadium, and Guanabara Bay. You can even lay down to ensure the best angle for that inevitable photo of Jesus and your travel companion together in that famous ‘arms wide’ pose. 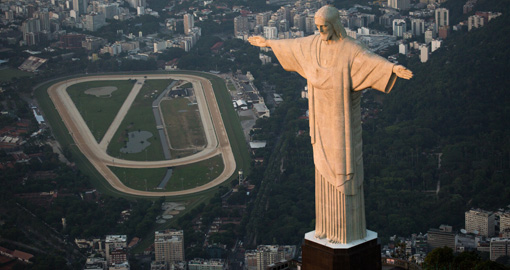 What is Christ staring at across the city? Follow his gaze to Rio de Janeiro’s other iconic peak and must-see view, Pao de Acucar. Though its 400 metres falls way short of the Corcovado in height, Sugarloaf, as it’s known in English, offers hands down the best view of the Tijuca rainforest and its many mountainous peaks. Its famous cable car opened in 1912 (decades before its debut in the James Bond film Moonraker), only the third of its kind in the world. Staring back at Christ the Redeemer with Copacabana Beach stretching out to your left and the old city of Rio on your right will imprint an unforgettable Rio image upon your memory. Some call it a better view than the Corcovado, but do both and decide for yourself! 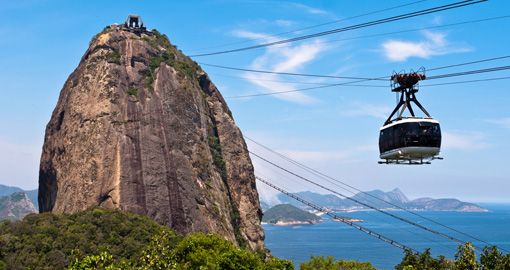 Sunset over Ipanema and Leblon

It’s hard to imagine today that beaches have been part of Rio’s culture for barely a century. Of Rio’s two great beach strips, Ipanema and Leblon has one distinctive offering Copacabana doesn’t. At the beach’s eastern end lies a rocky outcropping known as Arpoador. You’ll want to be here for at least one sunset as the light disappears behind Dois Irmaos, the mountain formation known as the Two Brothers, and the whole beach applauds the end of another perfect Rio day. Copacabana is the nicer swimming beach, but the sunset over Ipanema is one of those experiences that leaves you in awe of nature without ever leaving the city. 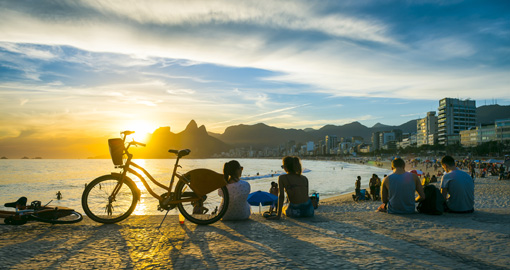 The neighbourhood that secured Rio’s reputation as a hotspot for tropical nightlife, Copacabana is arguably the most impressive urban beach in the world. Even if a day lazing at the beach isn’t to your taste, the historic Copacabana Fort opens up a chapter of Rio’s history, while at the northern end, Morro do Leme offers a spectacular view back down the beach. 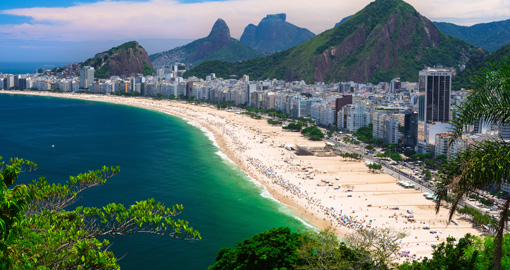 There was a Rio before it became a beach town, and its influence on art, theatre, cinema, music and culture reached far and wide. In the early 1900s, the square known as Cinelandia was the Broadway of the Brazilian film world. Today, many of the old theatres are either closed or converted into restaurants, bars, or clubs, but some are being restored into cinemas once more. You’ll also find the Municipal Theatre here, part of early attempts to make Rio into the Paris of South America. The label never quite took hold, but if Rio is a southern Paris, nearby Lapa is its Montmartre, a refuge for artists and scoundrels – often one and the same! The birthplace of modern samba, Lapa remains a great place to dance the night away. Just be sure to get a cab or Uber when you’re done. This isn’t an area to walk around at night. 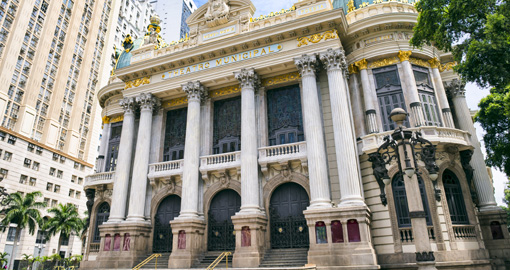 While Lapa was where Rio’s working class danced the night away, Santa Teresa overlooked it with a somewhat more genteel air. Before the emergence of Copacabana, Ipanema, and Leblon (now Rio’s most expensive district), this was the neighbourhood for Rio’s well-to-do, and it shows in the dramatic mansions and colourful architecture they left behind. Today, you’ll find it full of cafes, galleries, and loads of traditional Rio atmosphere. 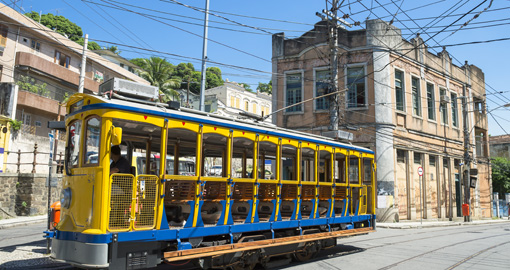 One of Rio’s newest attractions has fast become one of its most beloved. Only completed in 2013, this colourful stairway is the work of Jorge Selaron, a Chilean artist who loved Rio so much he began renovating the steps in front of his house in 1990. Eventually, visitors from around the world began bringing him tiles for the colourful makeover. Now covered in the images and icons of Rio de Janeiro, the steps mark the playful gateway between the historic Lapa nightlife district and Santa Teresa. 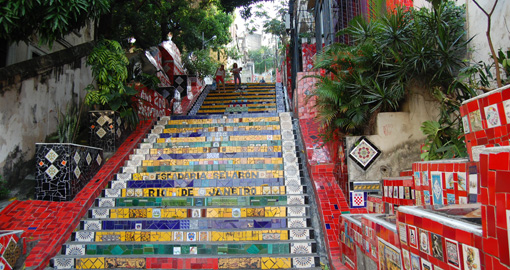 Spreading across the centre of Rio (remember, there is a vast amount of city to the west and north that tourists rarely see), this natural playground offers you a chance to escape the frenetic pace of Carnival or the tourist crowds on the beach. You can even take it all in from above, hang gliding from beautiful Pedra Bonita. 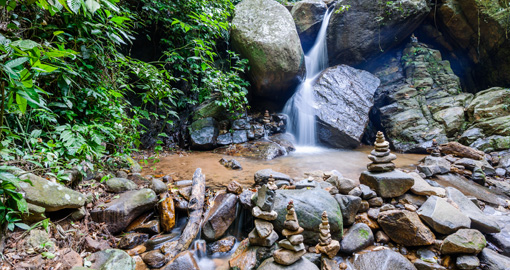 Before the 2016 Olympics, Rio de Janeiro’s port district was little more than a busy overpass sheltering an alarming drug problem. The revitalization of the district has swept all of that away. It includes new public artwork including the world’s largest mural, and the space age Museum of Tomorrow, was a crowning highlight of the city’s makeover. You’ll find the Rio Art Museum, and Banco do Brasil Cultural Centre near here as well. 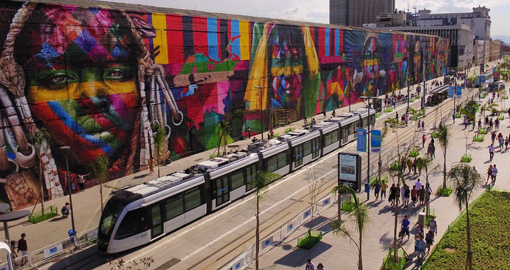 While the Tijuca National Park is its centerpiece, Rio also boasts two great outdoor spaces in the Zona Sul. Parque Lage is home to Rio’s most famous visual art school, housed in an historic mansion with views up to the Corcovado. A short distance away are the Botanical Gardens, housing about 6,500 different species of plants including some endangered species. Visit them both on a bike ride around Lagoa Rodrigo de Freitas for an active morning out in Rio. 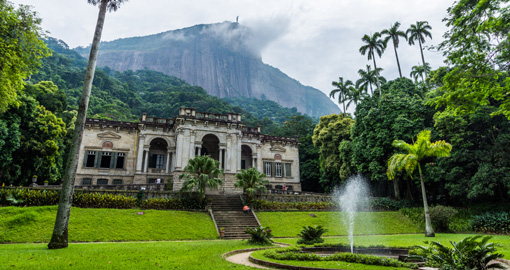 Away from the beaches, Rio is not particularly expensive, but most visitors find the added safety and convenience of the Zona Sul to be worth the extra cost. Uber is a cheap and a reliable alternative to cabs, particularly after dark, when you should not be wandering on foot. A basic meal at a local buffet will cost around 25-30 BRL, while a mid-range, 3-course dinner for two will be around 120 BRL. Dining at an all-you-can-eat churrascarra will cost more, but is an essential Brazilian experience! Local beers cost around 8 BRL. Don’t underestimate your sightseeing budget. Major landmarks including the Corcovado and Sugarloaf cable car are unusually expensive. A guided tour that includes entrance tickets can be a worthwhile investment. Credit cards are accepted just about everywhere (even at many stalls on the beach). Just be sure to carry a little cash as well, for safety as well as convenience. Prices climb considerably over Carnival, particularly for hotels and good private guides.

Rio’s reputation can intimidate some visitors, and many non-Carioca Brazilians scorn it as not representing the ‘real’ Brazil. Neither should deter you from visiting. Rio has become much safer in recent years, but it does require a few extra precautions. Your hotel concierge or guide will usually be happy to discuss things openly and frankly, and offer sensible advice. Don’t bring valuable items to the beach, though it’s normal to ask your ‘beach neighbour’ to watch your towel and clothes while you’re swimming, in exchange for returning the favour. If you do need urgent help, the DFAT are police who speak English and are specially trained to assist tourists. When visiting Rio, be prepared, not paranoid.

Brazilian Portuguese is rich with local expressions and colour, but the basics are easy to learn. Questions are particularly easy to form in Portuguese, as they are marked only by an upward intonation at the end of the sentence. On the flipside, this can be a serious test of your listening skills! Relatively few locals speak English outside the tourism industry, so break out that phrase book or consider taking some classes before you arrive. Some Spanish can help, but it is certainly not mutually intelligible with Portuguese.