Things to do in Uruguay

Every country has its outstanding and special attractions. Goway has selected its Top 14 things to do in Uruguay (not in any particular order) for you to enjoy on your visit to this destination. 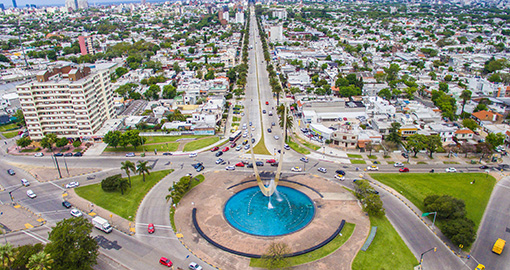 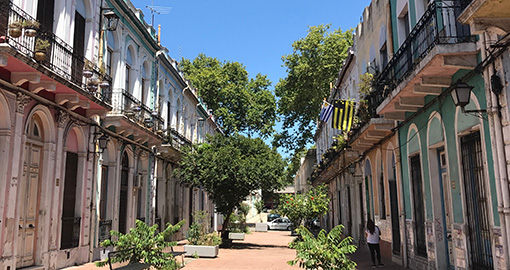 This is the oldest part of the city of Montevideo and is a Barrio (neighbourhood). The beautiful old architecture here lends Ciudad Vieja its character. During the week, the pedestrian streets are full of visitors, street vendors, and street musicians. It is full of beautiful old architecture with outstanding examples of 17th and 18th Century buildings that have been renovated and restored to their original condition. 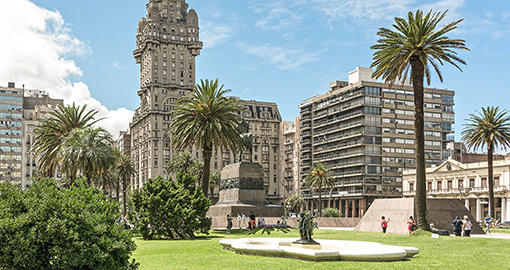 This plaza is Montevideo's largest plaza commemorated by the Spanish. It divides the business section from the Old City. In the centre is a huge statue of the hero of the revolution, Jose Artigas and the subterranean Artigas Mausoleum where a guard of honour keeps a 24-hour vigil over his remains. Other structures surrounding the plaza include the stone gateway Puerta de la Ciudadela and the Palacio Estevez which used to be the working palace of the President of Uruguay but has now been converted into museum housing artifacts and mementos of the Uruguayan presidency. 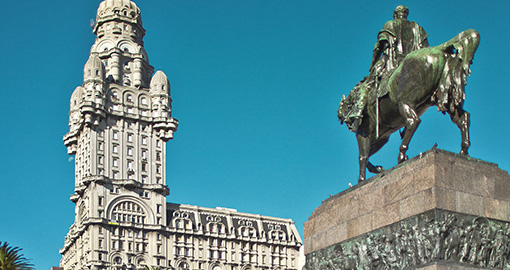 The 26-story Palacio Salvo was the tallest building in Latin America when it opened in 1927 and is still a classic Montevideo landmark on an Uruguay vacation. Inside Palacio Salvo, the Tango Museum of Montevideo is open to the public and contains exhibits about the history of La Cumparsita and the Uruguayan Tango. 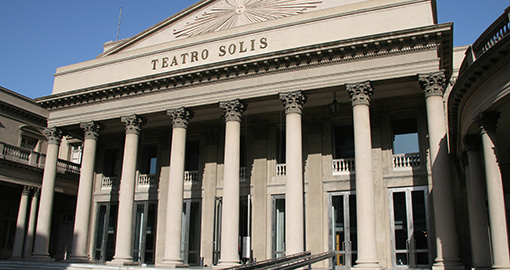 The Solis Theatre is Uruguay's most important and renowned theatre. It opened in 1856 and was designed by the Italian architect Carlo Zucchi. It is located in Montevideo's Old Town next to the Plaza Independencia. The building is a striking neoclassical masterpiece and is the heart and soul of the city’s performing arts scene. It has hosted some outstanding artists and performers such as Sarah Bernhardt, Vivien Leigh and Enrico Caruso. Today, on a trip to Uruguay, you can enjoy performances of opera, ballet, orchestra concerts and plays.

This is the main Roman Catholic Church of Montevideo and the seat of its archdiocese. It is located in the neighbourhood of Ciudad Vieja. The building was erected in 1790 in the neoclassical style. There is one major altar, several side altars, memorials, and tombs of several of the former archbishops and bishops who served in the Cathedral. On a side altar is an image of the Virgin of the Thirty Three, patron saint of Uruguay. 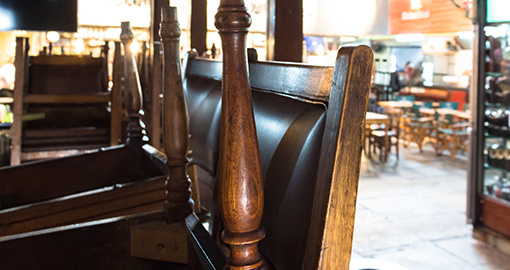 This market is located close to the waterfront in the Cuidad Viejo. It has been in existence since 1868. African slaves and other illegal imports from Europe were sold here. Many visitors come here daily to purchase items such as antiques, traditional clothes, leather goods and souvenirs. You can have a meal or just a snack at one of the restaurants or a local bar. It is a tradition for locals to have lunch here on Saturdays. 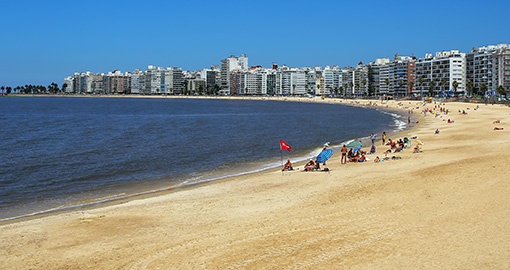 There is a very attractive coastline which is part of the city. It is here, on Uruguay vacations, that you will feel as though the urban districts don’t exist. You will see locals enjoying the several different beaches, either simply strolling, cycling or rollerblading along the boardwalk or sitting outside restaurants and cafes. There are 10 individual beaches that hug the shoreline, all with white powdery sand and with a choice of hotels catering to international visitors. The best-known one is Pocitos Beach which has a very attractive promenade complete with restaurants, bars and hotels. 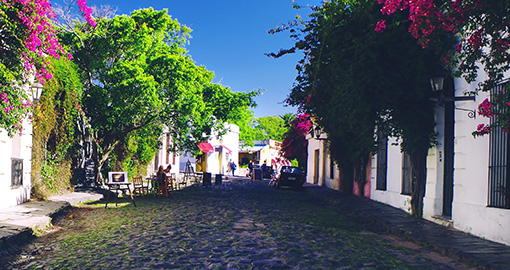 This is a totally charming small city that was awarded UNESCO World Heritage status as it is here that history and culture come together. The old part of Colonia, known as the Barrio Historico, is made up of picturesque narrow cobblestone streets with buildings that reflect both Spanish and Portuguese colonial architecture. One way to simply enjoy Colonia is to walk around and discover the many side streets including the Calle de Suspiros (Street of Sighs) which personifies the old quarter and the large main square which has a number of restaurants offering tables inside and outside. 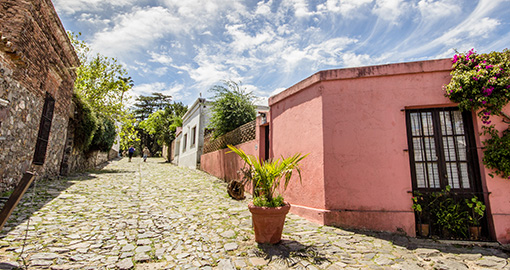 A sight that will catch your eye in Colonia del Sacramento, on an Uruguay vacation, is the number of interesting-looking vintage cars which are everywhere and are used by the locals. The Church Matriz is considered the oldest church in Uruguay and is another UNESCO World Heritage site. The El Faro Lighthouse, built-in 1857, is worth seeing, first, because of its shape and design and secondly, the view from the top which can be visited and allows an unrestricted view over the city and the River Plate, the waterway between Uruguay and Argentina.

For museum buffs, there is the Granja Colonia Arenas Museum with its collection of souvenirs collected by the family Arenas, 80,000 items over the past 50 years. It holds 5 awards in the Guinness Book of World Records Items include 16,000 plus black graphic pencils, 3600 perfume bottles, 36,000 key chains, 4800 ashtrays, 10,000 matchboxes and several hundred drink cans. The museum offers traditional fruit-flavoured jams/jellies as well as some more unique flavours such as onion and pepper ones. Tasting is free and they are available for purchase. 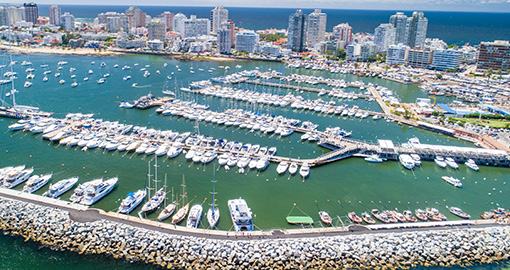 Punta del Este is an upscale resort in the south of the country and South America’s most glamorous. It has been referred to as “The Monte Carlo of the South” and “The St. Tropez of South America”. It has excellent beaches, an attractive city centre and wonderful views of many sailboats bobbing up and down in the marinas. The city has quite a bit of Colonial architecture which contrasts with the more modern buildings. Playa Mansa is the most popular beach where you can do almost everything – walk on the boardwalk, swim, windsurf, sail, and enjoy a number of good restaurants and cafes. Playa Brava is another popular beach. Punta del Este has a vibrant nightlife with a large selection of lively bars, nightclubs and a casino. You can visit the Ralli Museum which features modern and contemporary Latin American art and also visit the outdoor sculpture park at the Atchugarry Foundation with its diverse collection of works by national and international artists. The Lussich Arboretum has more than 100 species of plants set in 192 hectares/470 acres of land. Punta Ballena is a viewpoint with a 360-degree panoramic view of the Atlantic Ocean. Finally, on a trip to Uruguay, you can experience the beautiful amazing sunsets which exist in Punta del Este, especially at Punta Ballena. 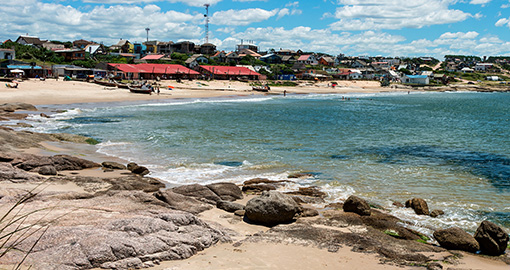 Punta del Diablo is a fishing village that has become a major resort. It is perched on a hill overlooking the ocean. Due to strict building codes, there are no high rises or sprawling luxury resorts or high rises. Instead, there are small hotels. There are several restaurants including fine-dining options. The picturesque, white sand beaches are a major attraction here. The Parque Nacional Santa Teresa (Saint Teresa National Park) is just outside Punta del Diablo and is home to approximately 2 million trees as well as flora and fauna from around the world including rare cormorants. The park has 60 kilometres/37 miles of hiking trails. Whales can be seen along the shore during the summer. 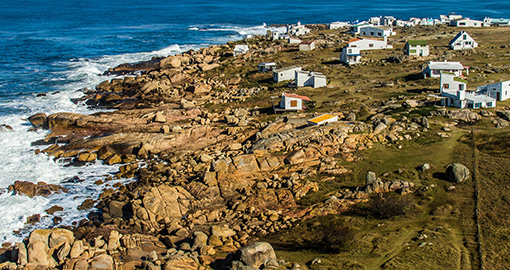 Cabo Polonio sits on the tip of a peninsula that extends into the Atlantic Ocean. It is one of Uruguay’s wildest areas and home to its second-biggest sea-lion colony. There are no banking services, and the town’s limited electricity is derived from generators and solar and wind power. The ocean side of the peninsula experiences strong waves, while the bay interior of the peninsula is sheltered. Cabo Polonio is a real paradise. Due to the quietness of its beaches, it has been one of the most visited swimming resorts for a quiet vacation.

This is a family-run ranch 80 kilometres/50 miles east of Punta del Este surrounded by the sierras (hills) of Rocha, ravines, native grasslands and rolling meadows. This 950-hectare working farm attracts a variety of wildlife. There is an attractive outside terrace where tea is served together with a restaurant and an outdoor swimming pool. Activities include riding around the estancia or full-day rides to the beach, swimming, walking and bird watching. The area has many important ecosystems such as wetlands with a great variety of birds. From here, you can visit nearby beach resorts such as La Paloma, La Pedrera or Cabo Polonio. 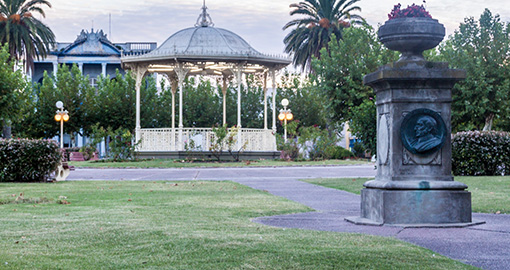 About an hour north of Colonia del Sacramento is the town of Fray Bentos, home of the meatpacker, Fray Bentos of corned beef fame. There is a museum here that was awarded UNESCO World Heritage status. The company opened a museum to illustrate the entire meatpacking process and to quote UNESCO, “provides evidence of the interchange of human values between European society and the South American population of the 19th and 20th Centuries". 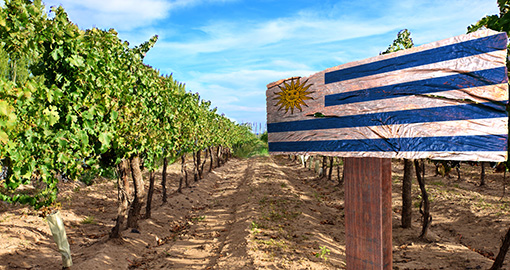 Uruguay’s wine industry may not be well known but it produces some very high-quality vintages and has some wonderful vineyards which can be visited on an Uruguay vacation. The traditional vineyards were founded by immigrants who continued their historic tradition of wine in their new homes. You can visit many wineries. Bodega Garzon is located on top of a mountain range close to Punta del Este and the historic town of Garzon. It is definitely worth a visit as it is a quaint little town. Just outside of Punta del Este is Vina Eden which offers amazing panoramic views of the surrounding hills and coast. You can wander around the vineyard or explore it on horseback or even a Segway. Just outside Montevideo is Juanico, one of the country’s best-known wineries where they produce the national wine, Don Pascual found everywhere. There is a large wine cellar to visit. One of the oldest vineyards in the country is De Lucca, founded in 1945. It is a boutique vineyard that has been owned by the De Lucca family since it was established. All tours are conducted by family members who passionately describe every aspect of their work and the vineyard.