Slovakia: Things to do

Every country has its outstanding and special attractions. Goway has selected its Top 9 Things to do in Slovakia (not in any particular order) for you to enjoy on your visit to this destination. 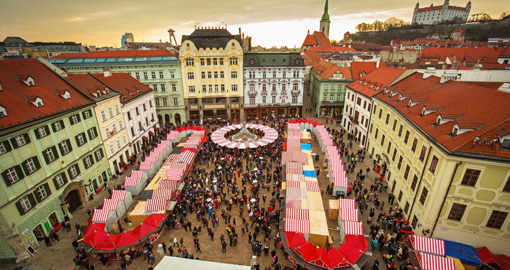 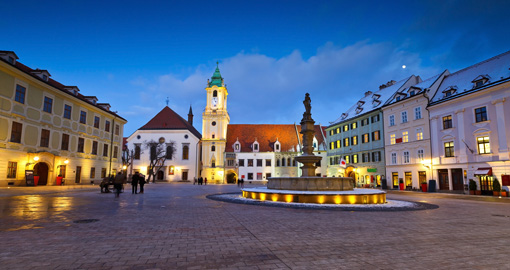 The Old Town of Bratislava is the historic centre and is a well preserved medieval district with many churches and narrow streets filled with cafes and restaurants to enjoy on a Slovakia vacation. The Old Town Hall in the main square was the house of the mayor of the medieval town. Since 1868, the building has housed what is now the oldest museum in Bratislava, the City Museum. St. Michael's Tower is one of the most important symbols of Bratislava. It is the only remaining original gate of 4 to the Old Town and is much photographed. . Zichy's Palace is an elegant building dating back to 1775. It is now used for ceremonies and celebrations. A memorial plaque outside of the Baroque-style Pallfy's Palace advises that the six-year-old child prodigy, Wolfgang Amadeus Mozart (1756-1791), probably performed a concert in the palace. St. Martin’s Cathedral is the largest and oldest as well as the most remarkable church in Bratislava originally built in the 14th Century. 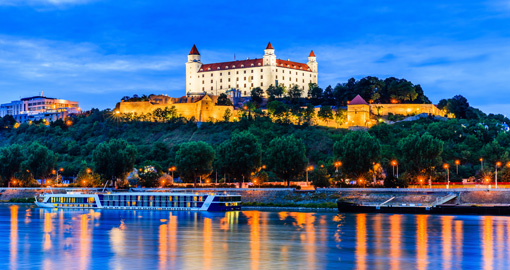 Bratislava Castle sits on a hill overlooking the city. Although the main part of the castle building only dates back to the mid-1900’s, (some segments date back several centuries), this majestic-looking castle is well worth a visit even if only for the excellent panoramic views of the surrounding area. The castle itself has a long history going back to the 10th Century. Inside the castle are a History Museum and the National Museum. The latter contains a large number of paintings by both local and foreign artists, a collection of Slovakian glassware and furniture as well as clocks, weapons and armour. 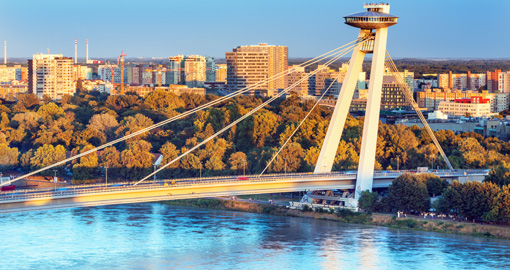 Novy Most or New Bridge was completed and opened to traffic in 1971. It straddles the River Danube dividing the city Situated about 300 feet above the Danube River and is an interesting structure architecturally. There is a walkway for pedestrians to walk across. At the south side is the Novy Most UFO Observation Tower with its observation deck where the views of Bratislava are outstanding. There is also a restaurant for dining while looking at the views of the river and the city. 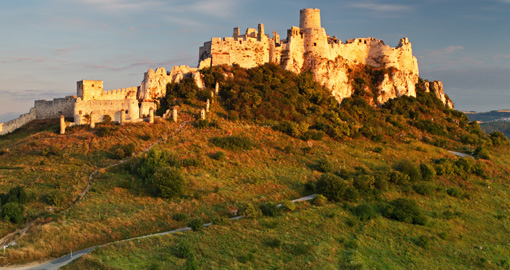 This National Cultural Monument, although partially in ruins, is one of the largest castle compounds in Central Europe and is a UNESCO World Heritage site. Construction of this medieval castle dates back to the beginning of the 12th Century. It was an important political, economic and cultural centre for this part of the Kingdom of Hungary and of several kings and families who owned the castle. Several movies have been made here due to its historical ambience. Now, it serves as a museum with exhibits from the Stone Age until the Middle Ages. Roman coins were found inside a cave under the castle. The castle's kitchen has been restored and you can almost see the cooks preparing food for castle's lords. There is a tower which can be climbed for interesting views of the surrounding countryside. 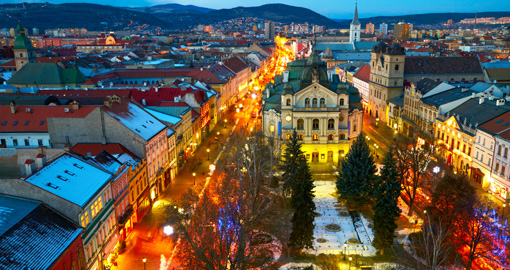 Kosice is the second largest city in Slovakia and in 2013 was the European Capital of Culture. The city has a well-preserved historical centre with many heritage-protected buildings in Gothic, Renaissance, Baroque, and Art Nouveau styles. It also contains Slovakia's largest church, the 14th Century Gothic St. Elisabeth Cathedral. The long main street has aristocratic palaces, churches, and old houses and is a pedestrian zone with many boutiques, cafés, and restaurants. Other monuments and buildings on a Slovakia vacation of cultural and historical interest are the old Town Hall, the Old University, the Captain's Palace and Liberation Square. Kosice has a number of art galleries (the East Slovak Gallery) and museums (the East Slovak Museum). The Kosice State Theater features drama, opera, and ballet. There is also a Marionette Theatre. 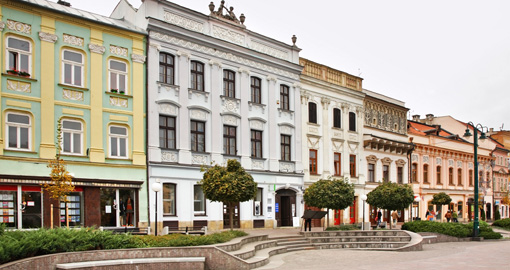 Presov is the third-largest city in Slovakia. The old town has a wealth of Baroque, Rococo and Gothic architecture. The historical centre is lined with buildings built in these styles and is a rival to Kosice. The centre is dominated by the 14th Century St. Nicholas Church with its tall tower. The most outstanding building is the Rakozcy Palace which houses the Vlastivedne Museum which details the history of the city from ancient times to the early 20th Century. It also has a collection of historical clocks. Another important building is the magnificent baroque Klobusicky Palace built in the 18th Century. The Presov Wine Museum, located in the basement of the Town Hall, features more than 1500 types of wines from around the world including Slovakian and Moravian wines. 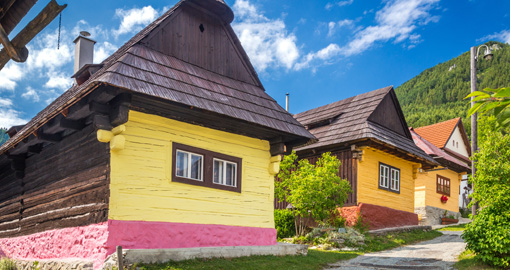 Vlkolinec is a small village and an excellent sample of the old rustic architecture to be experienced on a Slovakia vacation. This is the only village in Slovakia that has not been disturbed by new development. It is a living preservation of folk architecture and as such, is a UNESCO World Heritage site. Chickens and other farm animals roam freely in the village and there is a sense of peace and tranquility. One house is arranged as a village life museum and an information centre. Among the protected buildings in the community are 45 log houses with farmyards from the 18th Century. 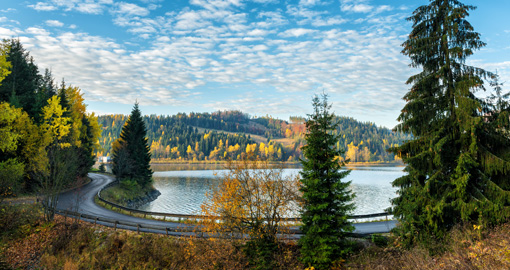 This is one of the nine national parks in Slovakia and is situated in East Slovakia. The National Park protects the area of the Slovak Paradise mountain range. The park offers about 300 kilometres/180 miles of hiking trails with ladders, chains and bridges. The park contains about 350 caves but only the Dobsinska Ice Cave, a UNESCO World Heritage Site, is open to the public Rivers and streams have formed many gorges, canyons, valleys, caves, and waterfalls in the Slovak Paradise National Park. The best-known is Velky Sokol, the longest at 4.5 kilometres/2.78 miles. The park contains a great diversity of wildlife species, around 4000 which includes 2100 species of butterflies. It is home to 65 endangered species, including the saker falcon, European otter and European ground squirrel. 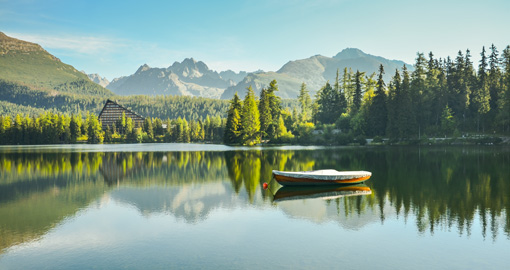 Also known as the High Tatras, this is the tallest range in the Carpathian Mountains and form a natural border between Slovakia and Poland. It has around 25 peaks which measure above 2500 metres/8100 feet. The highest peak is called Gerlach which is at 2655 metres/8710 feet. The terrain has pristine snowfields, ultramarine mountain lakes, thundering waterfalls, pine forests and alpine meadows. Visitors come here to hike, cycle or, in the winter, ski.