FIRST-CLASS | SELF-DRIVE: Discover the delights of northern Spain on a unique self-drive program. Start in Madrid, then discover the cities of Toledo, Burgos, San Sebastian, Segovia and more. See charming medieval cities, attractive beaches and stunning mountain scenery. Spend time in Santiago de Compostela, the final destination on the Way of St. James pilgrimage route, before heading back to Madrid. 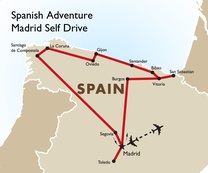 Pick up your rental car at Madrid airport and then stay in Madrid for 2 nights. Enjoy the sights and major landmarks in the morning followed by an included lunch at a well known local restaurant. In the afternoon, drive to nearby Toledo, the Imperial centre of European medieval history. This fortified walled city, a UNESCO World Heritage site is located on a hill and once you step inside, it is like going back in time. Worth visiting are the Cathedral dating back to the 13th Century, the Alcazar or Roman Palace and the house of the painter El Greco. Return later to Madrid.

The following day, drive 244 kilometres/150 miles to Burgos, the historical capital of Castilian Spain. Burgos has a magnificent Gothic cathedral. Also worth visiting are the Carthusian Monastery of Miraflores and the Monastery of Las Huelgas. Stay overnight here
The next morning, drive 120 kilometres/75 miles to Vitoria, the medieval capital of the Basque Autonomous Region. Take in the Parliament and the Government headquarters.

Continue to Bilbao, a further 65 kilometres/40 miles away where you will stay for the next 2 nights.

During your time in Bilbao, visit San Sebastian, a journey of 100 kilometres/62 miles. This stunningly attractive city, known as the “Pearl of Northern Spain, is renowned for its breathtaking beaches and also its historic old town. After exploring San Sebastian, drive back to Bilbao by way of the pretty beach resorts of Zarautz and Getaria.

Drive next to Santander a distance of 195 kilometres/120 miles, a city of interesting historical neighbourhoods. Here take in the Lighthouse of Cabo Mayor, the 12th Century cathedral, the attractive Pereda Gardens and the Royal Palace of Magdalena. Then continue to Gijon, a further 176 kilometres/110 miles where you will find the largest building in Spain, the Laboral University modeled on the Parthenon in Paris. Finally head to Oviedo, another 30 kilometres/18 miles where you will stay for the next 2 nights.

Oviedo has an old town district rich in architecture dating back to the early medieval period. From Oviedo, visit the town of Covadonga with its many interesting churches and nearby awe-inspiring local scenery including the breathtaking Picos de Europa range of mountains with its attractive lakes. On the way back to Oviedo, stop at Congas de Onis with its Roman Bridge.

The following morning, drive 290 kilometres/180 miles to La Coruna in Galicia with its Roman Tower of Hercules, a lighthouse dating back to the 2nd Century AD and enjoy the beach at the Playa de Riazor. Drive 70 kilometres/40 miles to Santiago de Compostela for overnight.

Millions of people from all over the world come to this city every year, many of them reaching the end of the Way of Saint James pilgrimage route. Its historic centre has been designated a World Heritage Site by the UNESCO. The next day, you have the morning free to explore the city. The cathedral, the Plaza del Obradoiro, the tomb of the apostle and the square are all noteworthy attractions. Then drive to Segovia, 537 kilometres/360 miles away. Segovia is an old walled city and a UNESCO World Heritage site located on rolling hills. Make sure to see the Roman Aqueduct and the Alcazar/Royal Palace. Stay overnight here.

Your final drive today is back to Madrid, a journey of 90 kilometres/55 miles for one more night’s accommodation there. The next day return your rental car back to Madrid airport.

Upon arrival at Madrid Airport, make you way to the car rental depot to pick up your rental car. You are then free to make your own way to the hotel. Overnight in Madrid.

Today you can enjoy breakfast at the hotel before taking yourself on a tour Madrid. It is recommended that you visit some famed tourist attractions like Paseo de la Castellana, Gran Cia, Puerta del Sol, and Plaza de Toros de las Ventas. Enjoy lunch at La Capilla de la Bolsa (included). In the afternoon, drive to city of Toledo (approx. 70km) to take in the sights. Toledo is one of the most important centers of European medieval history. The first one to report about it was Roman author Titus Livius, who describes it as a "small fortificated town", and fortification has always been an important parameter in its history. Toledo was capital of Spain from the Gothic epoch until 1560, fact that explains its really impressive medieval architecture. Walking through its streets one feels like having stepped back into the Middle-Ages, but in the best sense of it, and perhaps you will search your pockets for a few gold-ducats to buy some of Toledo's fine artisany or just to enjoy of its highly recommendable cuisine. Overnight in Madrid.

Today, after breakfast, you will drive to Burgos (approx. 244km). Things to see in Burgos are the Home of the Miranda, House of Angels and the impressive gothic cathedral. Burgos was founded in 884, and its historical heritage is always evident to the visitor. It is a monumental town, charming for that so typical 4medieval northern castilian ambience. The gothic cathedral is all dominant, but there are many more important monuments such as the Cartuja de Miraflores or the Monastery of Las Huelgas. Generally the town is quiet and clean, and after your sightseeing-tour or a walk through one of the parks you may want to try out Burgos' exquisite cuisine. Overnight in Burgos.

Your day begins with breakfast at your hotel in Burgos, and then head out on your drive towards Vitoria (approx. 120km). Here you can stop for a brief visit in Vitoria, the capital of the Basque country and the capital city of Green European 2012. Then you will continue to Bilbao (approx. 65km) for the night. Overnight in Bilbao.

After breakfast at your hotel, it's time to head out to San Sebastian (approx. 100km), famous for its bay, beach, port and historic old town. Lying on the coast of the Bay of Biscay, being surrounded by hills, and offering a lively beach front means San Sebastien is a city that boasts a range of natural beauty, but the fabulous architecture, plazas and parks dotted throughout the city adds to its well-deserved label as the "pearl" of the North of Spain. On your drive back to Bilbao in the afternoon, stop in Zarauzt and Getaria. Overnight in Bilbao.

Today you will drive to Santander (approx. 195km) and check out the Pereda gardens, cathedral, lighthouse and royal palace. You will then continue to Gijon (approx. 176km) to see the largest building in Spain, the Universidad Laboral. The neighbourhood of Cimadevilla and the beach in Gijon are other noteworthy attractions. Finally head to Oviedo (approx. 30km) where you will be staying overnight.

Today we suggest you take a walking tour of Oviedo's old town after a hotel breakfast. An ancient, noble city surrounded by unbelievable nature, Oviedo provided a wonderful base for hiking, sight-seeing and culture. Head to Covadonga in the afternoon to see the area and walk by the lakes. As its location suggests, Covadonga pretty much targets every button on the scenic tourist's hit list and offers breathtaking scenery and close access to the famous Picos de Europa and some stunning mountain lakes. But possibly even more importantly, Covadonga also possesses a religious sanctuary with a splendid and historic basilica, a mythical grotto, a museum and both a statue to, and the tomb of, Asturian and Spanish hero, Pelayo. Stop in Congas de Onis before returning to your hotel in Oviedo. Overnight in Oviedo.

After breakfast at your hotel, the first part of your drive takes you to La Coruna (approx. 290km). Here you can see the tower of Hercules, Playa di Riazor and City Hall. La Coruna is part of the Spanish autonomous community of Galicia, a region of vast green landscapes with a rich Celtic and Roman heritage which keeps, still today, a mystic and magic allure. Drive to 70km to Santiago de Compostela. Millions of people from all over the world come to this city every year, many of them reaching the end of the Way of Saint James pilgrimage route. Its historic centre has been designated a World Heritage Site by the UNESCO. Overnight in Santiago de Compostela.

After breakfast, enjoy free time to visit the city. The main sights of interest are the Plaza del Obradoiro Square and the Cathedral, with the Portico de la Gloria and Tomb of the Apostle. Later in the day, make your way to the next destination, Segovia.

Enjoy breakfast at the hotel in Segovia, followed by time to explore the city and its famous Roman aqueduct. It will then be time to return to Madrid (90km). Overnight in Madrid.

Today marks the end of the trip. After breakfast you will check out and return your rental car to the airport. You are then free to make your onward journey!

Prices are "from", per person, based on twin share and include all taxes. The driver must be over the age of 25 and hold a valid driver's licence, plus have a credit card for the security deposit. An International Drivers Permit is also required. Subject to availability at the time of booking.