Great Parks of The East

FIRST-CLASS | SELF-DRIVE: Cosmopolitan Toronto is the starting point of this two-week circular tour. Driving north from the city, you can explore some of Ontario’s famous national parks nearby. After a brief stay in the capital, Ottawa, return to the tranquility of nature in Québec's delightful outdoor spaces. The trail leads southbound via the bustling cities of Québec City and Montréal, famous for their joie de vivre, to the thundering splendor of Niagara Falls. 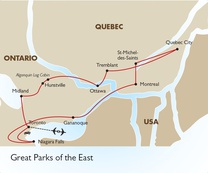 Toronto is the starting point of this two-week circular tour, which allows you to explore relaxing Ontario parks as well as the nation’s capital, Quebec City, Montreal and Niagara Falls.

Following your arrival, you have the day to explore Toronto. Check out the boutiques in Leslieville, wander the boardwalk that lines Lake Ontario in the Beaches neighborhood, and finish the night with a drink at one of the city’s rooftop hotel bars.

Your day two drive takes you to Huron country. In the town of Midland, Georgian Spirit Cruises offers tours to view some of the 30,000 islands, the world’s largest freshwater archipelago. Leaving Midland, the road leads north-east to the Muskoka Region, a playground for Canadians and Americans alike. Check out the boutique shops of Port Carling, where there are also pretty waterfront parks and an engaging pioneer museum. Head to Huntsville for the night.

Huntsville has a nice downtown, with historic brick buildings and waterfront cafes where you can watch the boats go by. Huntsville is just a short drive from magnificent Algonquin Provincial Park, with hilly terrain and quiet, pristine lakes.

The next day you’ll journey into Quebec’s Gatineau Park, a delightful area of hills, lakes and forests. Be sure to see the lovely gardens and buildings at Mackenzie King Estate, former home of Canadian Prime Minister Mackenzie King.

The next morning, try a boat cruise on the Rideau Canal, or explore the shopping scene in The Glebe neighborhood. You’ll overnight in the resort area of Mont Tremblant in Quebec.

Enjoy a full day in the Laurentians. Stroll through the beautiful pedestrian village in the town of Tremblant, or take a ride to the top of the ski hill for wondrous views.

As you make your way to Quebec City, stop in the artsy town of Saint Saveur to explore galleries and independent shops. Many streets in the city of Trois-Rivieres feature 18th-century style structures and galleries.

From there it’s on to Quebec City, with its unique French culture and joie de vivre. Wander through narrow alleyways and admire the coloured, tiled roofs and cobblestone lanes. You can take a funicular from the upper town to the romantic, lower quarter and try an outdoor café.

The next day you can enjoy a fabulously scenic drive through the fertile plains and rolling hills of the Mauricie and Lanaudiere regions. Reservoir Taureau and Baie du Milieu offer activities such as canoeing, kayaking, mountain biking, sailing and hiking.

From Saint-Michel-des-Saints you’ll make your way to vibrant Montreal. Wander Rue Saint Paul and admire the cutting-edge galleries and small restaurants. Rent a bike in Old Montreal and take an easy, path west along the Lachine Canal to the Atwater Market, which has fabulous Quebec cheeses, as well as fresh pastries and produce.

Across the border in Ontario, stop in Gananoque and take a boat cruise to enjoy the tranquility and beauty of the Thousand Islands and its majestic island homes, including Singer Castle. Downtown Kingston has lovely waterfront parks and great restaurants.

Drive along Lake Ontario to reach Niagara Falls. Visit Niagara-on-the-Lake, a quaint 19th-century village. Once in Niagara Falls, the Hornblower Niagara Cruise Voyage to the Falls is an unforgettable journey to the base of one of nature’s most powerful waterfalls.

Arrive at Pearson International Airport, Toronto, and transfer independently to your downtown hotel. The Roadbook you received will have all the information needed for your holiday/trip/journey. The Remainder of your day is at leisure, perhaps shopping at the Eaton Centre or sampling the fine cuisine and nightlife of Toronto.

Today’s scenic drive takes you to Huron country with a suggested detour through Penetanguishene, an old native village. You will certainly want to experience a little bit of the Georgian Bay's ‘30 000 Islands’, the world's largest freshwater archipelago and, time permitting, tour the Jesuit mission at Sainte-Marie among the Hurons.

Leaving Midland, the road leads north-east to century-old Algonquin Provincial Park, the first national park to be established in Canada, and the beautiful Muskoka region. It’s a relatively short driving day with lots of opportunities to stop and enjoy the magnificent scenery.

There’s lots to do in Huntsville, located on the edge of Algonquin Provincial Park and Ontario’s coveted ‘cottage country’, known for a gracious lifestyle, endless summer days spent on a multitude of freshwater lakes and rivers and spectacular natural beauty. For the outdoors enthusiast there are hiking trails, horse riding opportunities and boat cruises. A short drive away are Lion's Lookout Park or Muskoka Pioneer Village.

Today you journey into Quebec to Gatineau Park. This is a delightful natural area, almost an oasis, of hills and forest that boasts an amazing biodiversity. It’s near the town of Gatineau, which itself is just across the river from Ottawa, making this a great spot for hiking, canoeing, cycling, as well as winter sports. Make a point to see the Mackenzie King Estate, Étienne Brûlé Lookout and Philippe Lake.

It is a short drive into the Laurentian Mountains, and you should have time in the morning to see more of Ottawa, the Parliament Buildings, maybe even a short cruise on the Ottawa River. Your final destination of the day is the resort area of Mont Tremblant.

Enjoy a full day in the Laurentians. Visiting St. Jovite and MontTremblant Park, Quebec's oldest provincial park, you’ll uncover the scenic beauty that attracts travelers from around the world. Relax and take your time to enjoy the luxury resort area of Tremblant which invites you to stroll through its beautiful pedestrian village.

A scenic drive on the Chemin du Roy, Canada’s first year-round carriageway, brings you past numerous historical French-Canadian villages. Trois-Rivieres is Quebec’s second-oldest city and many of its streets feature 18th-century style structures and galleries. In Batiscan, you can view a stone presbytery, a fascinating architectural gem.

The best way to see the numerous historic buildings and experience the city’s unique French culture is to take a leisurely walk through the enchanting, cobbled streets, and narrow laneways. Don’t miss a visit to The Fortifications, the famous Plains of Abraham, the Place Royale, the Basilica, or the dramatic shrine at Ste. Anne-de-Beaupre. If you have time, a little outside the city are wonderfully natural settings of Montmorency Falls and Ile d'Orleans.

Today you can enjoy a fabulously scenic drive through the fertile plains and rolling hills of the Mauricie and Lanaudiere regions, wonderful examples of the unspoiled landscapes of Quebec’s less travelled regions.

Beautiful scenery surrounds you at Reservoir Taureau and Baie du Milieu, with numerous outdoor activities at your disposal, such as canoeing, kayaking, mountain biking or sailing. Alternatively, head for the hills along the hiking trails.

Traverse the Lanaudiere region and its numerous lakes. Stop in Berthierville and visit the Gilles Villeneuve Museum, then continue to the vibrant, cosmopolitan city of Montreal. You can create your own urban adventures that might include the Notre-Dame Basilica, Place d'Armes, rue St. Catherine, Old Montreal, the "underground city", Mont-Royal Park, the Biodome de Montreal and Insectarium, Olympic Stadium, botanical gardens, Musee des Beaux Arts, and the Oratoire St. Joseph. Spend the evening exploring this cosmopolitan center’s bustling nightlife and gourmet restaurants.

Drive along Lake Ontario, skirting Ontario's capital, Toronto, to reach Niagara Falls. Visit Niagara-on-the-Lake, a charming 19th-century village. Once in Niagara Falls, put on your rain jacket and step aboard for the ride of a lifetime! The Hornblower Niagara Cruises - Voyage to The Falls tour will take you to the American Falls before sailing past massive rock formations to the magnificent sight of the thundering Horseshoe Falls. Be assured that you will have unsurpassed photo opportunities.

Return to Toronto's Pearson International Airport to check in for your return flight, or your hotel if you plan to extend your stay.