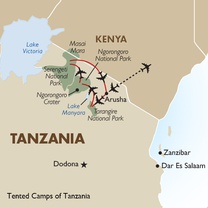 Tanzania is located in East Africa and is bordered by Kenya and Uganda in the north, Rwanda, Burundi and the Democratic Republic of Congo to the west and Zambia, Malawi and Mozambique to the south. The eastern portion of Tanzania is bordered by the Indian Ocean and boasts a 1,424 square kilometre coastline. Tanzania also houses the islands of Zanzibar, Pemba and Mafia which are located 45 km (28mi) from the coast in the northeast. Zanzibar is quite low-lying and is characterized by sandy beaches and coral reefs. Pemba Island is known as the “Green Island” and is hillier and more fertile than Zanzibar. The Mafia archipelago is made up of one large island and several smaller ones.

Mainland Tanzania is divided into several regions. The coastal plains are characterized by tropical vegetation. In the north, there is the Maasai Steppe which covers an area of around 82,000 square kilometres. The bulk of the country is a highland plateau, some of it semi-desert and the rest savannah and scattered bush.

Kilimanjaro is a dormant volcanic mountain in Kilimanjaro National Park. It is the highest mountain in Africa, standing at 5,895 m (19,341 ft). It is made up of three distinct volcanic cones, Kibo, Mawenzi and Shira. Another prominent geographical feature in Tanzania is Ngorongoro Crater. The crater is the largest un-flooded and unbroken caldera in the world, stretching 20 km (12.4mi) across, 600 m (1,968.5 ft) deep and totals 300 square kilometres in area.

At Goway we believe that a well-informed traveller is a safer traveller. With this in mind, we have compiled an easy-to-navigate travel information section dedicated to Tanzania.

After your African Safari, why not consider one of Goway's Europe tours or Egypt tours en route from Tanzania or perhaps a stopover in Dubai on one of our United Arab Emirates tours

Book your Tanzania safari with Goway!

AfricaExperts is the exclusive division of Goway that specializes in planning and organizing Tanzania safaris and experiences. Choose from a locally escorted tour, an exclusive African safari, a stay of distinction, a small group tour and more. We want to be your first choice when next you go globetrotting to Tanzania.