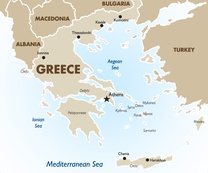 Greece lies at the meeting point of three continents – Europe, Asia, and Africa. Greece is bordered to the north by Bulgaria and North Macedonia, to the northwest by Albania, and to the northeast by Turkey.  The main geographic regions consist of the peninsular mainland, the Peloponnese peninsula, and more than 2000 islands scattered in the Aegean and Ionian Seas of which approximately 170 are inhabited. 80% of the country consists of mountains or hills making Greece one of the most mountainous countries in Europe.

Because of its geographical position, Greece was the crossroad of several civilizations, all of which left their mark. Modern Greece can trace its roots to the civilization of Ancient Greece.  Considered the cradle of Western Civilization, Greece is the birthplace of democracy, Western philosophy, and the Olympic Games. There are in fact, 17 UNESCO World Heritage Sites located in Greece.

An important percentage of Greece's national income comes from tourism. Greece is one of the world's most popular tourist destinations, ranking in the world's top 20 countries. The reasons are manifold but considering the attractions of its beaches and reliable sunny summer weather, its nightlife, historical sites, and natural beauty, its popularity is not surprising. The nation's terrain is just as varied as its architectural heritage: idyllic beaches, towering mountain ranges, wine-producing valleys, vast stretches of olive orchards in the south, and lush forests in the north. As for Greece's historical sights, the country offers just as many medieval churches and castles as classical ruins and temples

Athens, more than likely the first port of call for any visitor to Greece, offers many major museums, archaeological sites, and other attractions, as well as being a major national transportation hub. It is also the starting point for the many island cruises which vary in length and quality.

Thessaloniki is Greece’s second-largest city and is a lively cosmopolitan centre. It has a large number of Byzantine churches and a history dating back 3000 years.

Some of the better-known Greek Islands are Crete, Rhodes, Mykonos, and Corfu. Corfu is a lush green island with excellent beaches; Crete is not only known for its beaches but also for its Roman and Turkish architecture and ancient Minoan ruins; Mykonos is a sophisticated vacation centre and Rhodes offers beaches and mountain scenery, as well as being the ancient site of the Colossus, one of the seven ancient wonders of the world.

On the Peloponnese mainland, there is Delphi, famous for the Oracle of Apollo and Olympia, the site of the ancient Olympic Games.

At Goway we believe that a well-informed traveller is a safer traveller. With this in mind, we have compiled an easy-to-navigate travel information section dedicated to Greece.

Learn about the history and culture of Greece, the must-try food and drink, and what to pack in your suitcase. Read about Greece's nature and wildlife, weather, and geography, along with 'Country Quickfacts' compiled by our travel experts. Our globetrotting tips, as well as our visa and health information will help ensure you're properly prepared for a safe and enjoyable trip. The only way you could possibly learn more is by embarking on your journey and discovering Greece for yourself. Start exploring… book one of our Greece tours today!