Greece: Things to do

Not sure where to start in Greece? Here are Goway's top picks for what to see and do in this ancient cradle of civilization. 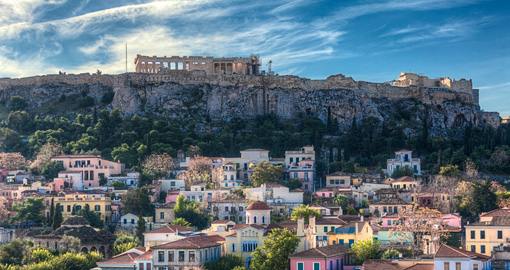 Give yourself plenty of time to visit the many important sites of Athens. With limited time, focus on these Athens highlights.. 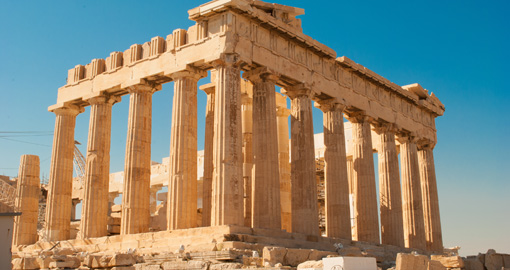 The Acropolis is the most important ancient site in Athens and is visible from almost anywhere in the city. It is an imposing hill in the centre of Athens. On the summit of the Acropolis is the Parthenon, an ancient temple dedicated to the goddess, Athena Parthenos and built between 447 and 438 B.C. It is built entirely of marble and is the largest Doric temple in Greece.  The statue of Athena was the most important sculpture in the Parthenon being over 12 metres/40 feet in height but it disappeared centuries ago and all that remains is a small replica of the same. Many of the artifacts which existed in the temple have been removed to the Acropolis Museum which is situated at the bottom of the hill.

Below the Acropolis is the Ancient Agora which is a wide expanse of ancient Greek remains. An Agora is a marketplace where people used to congregate to buy and sell all kinds of commodities. There have been many excavations that have been undertaken here.

The Panathenaic Stadium which was built in the 4th Century BC as a venue for athletic contests is oval-shaped and was a running track with stone seating all around it. The stadium was restored in 1895 in order to host the 1896 Olympics with seats for 70,000 spectators. 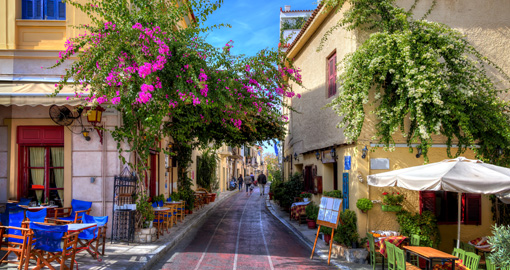 The Plaka is a self-contained area and an old historical neighbourhood of Athens not far from the Acropolis with a labyrinth of narrow streets.  It is also the site of many open-air restaurants to enjoy on your Greece vacation. In the Plaka, you can experience street musicians, flower sellers, and much more. There are ancient Greek and Roman ruins as well as some beautiful 19th Century and older buildings, plus some Byzantine churches.

Along with the Acropolis Museum, an important one is the National Archaeological Museum which has one of the world’s best collections of Greek antiquities, dating from as far back as the Neolithic Age to the Classical periods. The artifacts include sculptures, pottery, frescoes, and jewellery. There are over 10,000 items housed in the building. 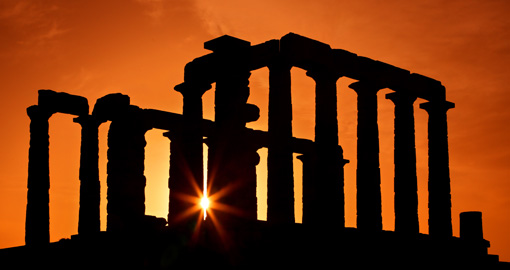 Just outside of Athens is Cape Sounion, the site of the ruins of an ancient Greek temple of Poseidon, the god of the sea in classical mythology. The temple was constructed in 444–440 BC. The remains are perched on the headland, surrounded on three sides by the sea. The ruins bear the engraved name of English Romantic poet Lord Byron (1788–1823). The site is also a popular place to watch the extraordinary sunset over the Aegean Sea

If you are strictly limited for time on a Greece vacation, consider a one-day cruise to three interesting islands – Hydra, Poros, and Aegina – all located fairly close to Athens, in the Saronic Gulf. You will have time ashore on each island to possibly have a quick swim, shop, or simply explore. Hydra is a car-free island that features narrow stone-paved streets and painted 18th Century houses. Poros is a beautiful green island with groves of pine and lemon trees plus narrow picturesque cobblestone streets.  The waterfront is lively with its shops, cafes, and restaurants. The island of Aegina is the largest of the three and has numerous charming fishing villages and quiet beaches. The Temple of Aphaea Athena is the most important monument on Aegina. 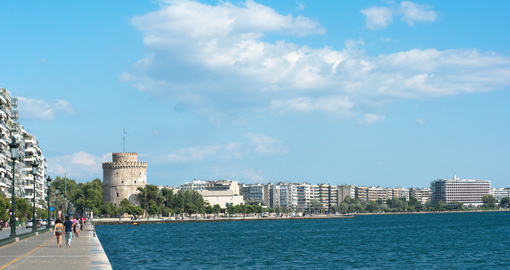 Thessaloniki is the capital of Macedonia and second-largest city in Greece. It was named after the half-sister of Alexander the Great. Thessaloniki has a long history and, after Constantinople, was the second most important city of the Byzantine Empire. It is no surprise that it is full of beautiful examples of Byzantine art and architecture. It is a lively modern city with wide avenues plus many parks and squares. Old houses stand side by side with modern buildings. The main square is Platia Aristotelous on the waterfront and is filled with cafes and restaurants, a great place to people-watch on travel to Greece.   Another lively area is the Ladadika neighbourhood, again, full of bars, cafes, and restaurants. The old port area has been rejuvenated with more restaurants and a couple of art galleries. A special structure is the 15th Century White Tower, the symbol of the city and a museum of art and history. Some of the other historical buildings include the Palace of Galerius, built in the 3rd Century AD, the Roman Market and Theatre, and the Roman Baths from the same era. Ancient Vergina is a UNESCO World Heritage site and one of the most extensive archaeological sites in Greece, located about 2 hours from Thessaloniki. It was the first capital of the Kingdom of Macedonia and was only discovered in the 19th Century with its important remains including a large palace and a burial ground with royal tombs. Another important archaeological site is Pella, the birthplace of Alexander the Great. Exploration of the site began in 1953 and continues today. In 2006, a farmer accidentally uncovered the largest tomb ever found in Greece. 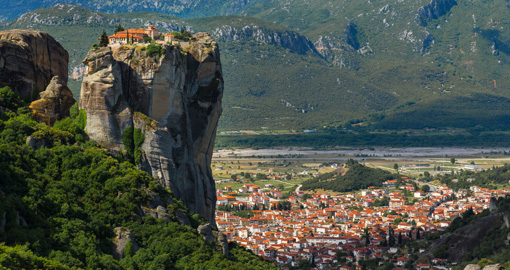 A visit to Meteora, perched above the town of Kalambaka, is a unique and breathtaking experience on trips to Greece. Situated roughly between Athens and Thessaloniki, this is a series of rock formations with vertical cliffs on top of which are to be found a number of monasteries dating back mostly to the 14th Century.  These monasteries were built by monks who were previously hermits living in caves. Originally, there were 24 monasteries but only 6 now remain. Meteora has become a pilgrimage for Christians around the world. A visit to the monasteries, even if your interests are not religious, will give you a spiritual and magical feeling. 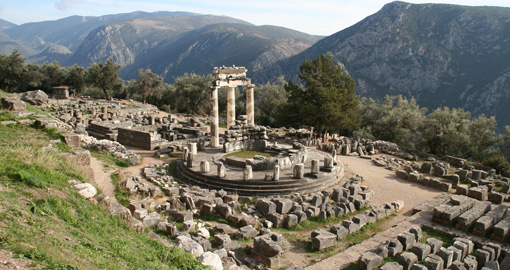 Delphi is famous as the ancient sanctuary, the site of the oracle that was consulted on important decisions throughout the ancient classical world. It is located in Central Greece on the southwest slope of Mount Parnassus.  It is a UNESCO World Heritage Site due to its history and significance in ancient Greek times. On a Greece vacation, after the Acropolis in Athens, Delphi is the most popular archaeological site in Greece. It was considered in ancient times to be the centre of the known world.  Delphi became the venue, every four years starting in 776 BC, where athletes from all over Greece competed in the Pythian Games, a precursor to the Modern Olympics. The Delphi Archaeological Museum contains a special collection of items associated with ancient Delphi. The permanent exhibition covers over 1,000 years from the Mycenaean era (1600 to 1100 BC) to Greco-Roman times. 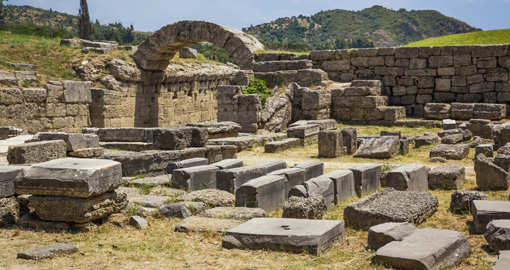 This is the birthplace of the Olympic Games. The ancient games were held every 4 years from the 8th Century BC to the 4th Century AD. Today, the Olympic flame is lit here before it travels around the world to its destination. Now, on Greek vacations, there are only ruins to look at, which include the Gymnasium from the 2nd Century BC, the workshop where the gold statue of Zeus was sculpted (it was one of the seven ancient wonders of the world), the immense Doric Temple of Zeus and the Stadium which was rectangular, unlike today's stadiums. It could seat at least 45,000 spectators. 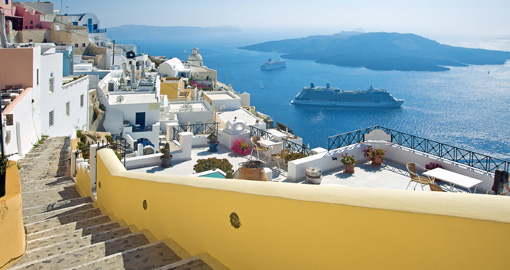 Santorini is what you might imagine as an archetypal Greek Island with its white-washed houses and churches and blue sky.  This very beautiful island was formed from a huge volcanic eruption which created a large lagoon in the middle of the island. It is consequently surrounded by steep cliffs on three sides. It still has an active volcano, the only one in the world whose crater is in the sea. The last big eruption occurred 3,600 years ago. Santorini has a reputation as being a romantic island with its crystal-clear waters. You can add to this the island’s amazing sunsets. The capital is Fira, a town of proverbial white-washed houses which lies on top of a series of high cliffs. It is where you will be rewarded with panoramic views of the island and an amazing view of the volcano on trips to Greece. Akrotiri is an ancient city dating back to the Minoan civilization (2700–1420 BC) which was rediscovered only 50 years ago when it was found under the volcanic ash from an earthquake in the 1600’s BC. Like the Roman ruins of Pompeii, it is remarkably well-preserved. Excavated artifacts are shown in the Museum of Prehistoric Thera in Fira. 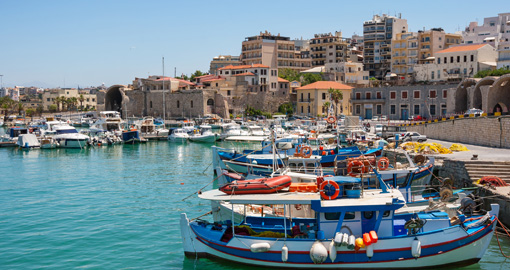 Crete, the largest Greek island, has ancient archaeological sites, great beaches, and superb scenery ranging from mountains to green valleys and steep gorges. The capital, Heraklion, is located between two mountain ranges. There is a Venetian fortress on the harbour walls, built in the early 1500s, Venetian mansions, and a number of Byzantine churches to view. The Palace of Knossos, just outside of the city, is a Minoan archaeological site, once the ceremonial and political centre of the Minoan civilization and culture. Another city is Chania, which hasn’t changed much from the time of the Venetian rule of Crete (13th to 17th centuries).  Remnants of Venetian and Turkish architecture are to be found with some of the old townhouses now restored. The old town is a maze of alleyways that contain the aforementioned Venetian mansions and churches. Rhodes is one of the best-preserved medieval towns anywhere, with buildings that date back to Crusader times.  The ancient city of Rhodes was first constructed in 407 BC and was designed according to the city planning system devised by the greatest city planner of antiquity, Hippodamus of Miletus. In 1309, the Knights of Saint John of Jerusalem conquered Rhodes and built strong fortifications to protect the island, turning it into a thriving multinational medieval city. During the Ottoman occupation, new buildings were erected within the Old Town, mainly mosques and baths. In 1912, Rhodes was conquered by the Italians who added magnificent buildings, wide roads, and squares. The Palace of the Grand Master was rebuilt and the Street of the Knights was reconstructed. At the end of the Street stands the Hospital of the Knights, which houses the Archaeological Museum. Rhodes is listed as a UNESCO World Heritage site. The Old Town of Rhodes is a mosaic of different cultures and civilizations, a wonderful stop on trips to Greece. There are around 227 inhabited islands in Greece, some large, some small.   Greece has been blessed with a collection of beautiful islands to visit on trips to Greece.  There are two ways of reaching the islands on your Greek Islands vacation. Either fly (not many islands have airports) or take a ferry from Athens to the island of your choice. Another option is to take a Greek Islands cruise but this will limit your time on each island although it does give the opportunity to experience several. These cruises vary from one day to around one or two weeks. You can also fly or, if available, take a ferry between certain major islands.