Things to do in Ireland 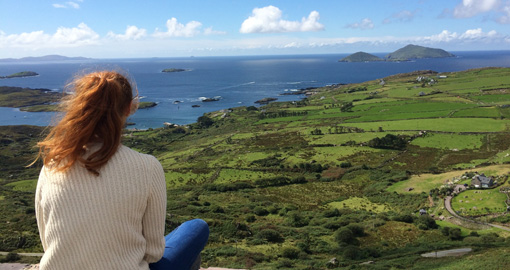 Every country has its outstanding and special attractions. Goway has selected its Top 13 Things to Do in Ireland (not in any particular order) for you to enjoy on your visit to this destination. 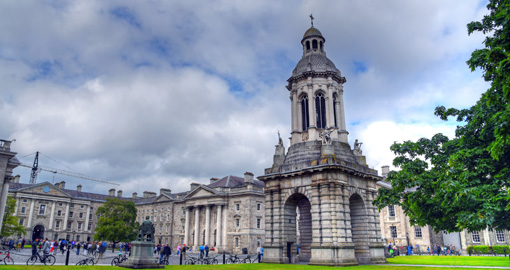 Apart from being an attractive campus in the heart of Dublin on Ireland tours, it has an extensive library with over 5 million printed volumes consisting of journals, manuscripts, maps and music. The most famous of its manuscripts, the Book of Kells and the Book of Durrow, were presented to the Bishop of Meath and former vice-chancellor of the university in the 1660s. Other special collections include the Usher collection acquired in 1661 and the Fagel collection of 1802. The Book of Kells attracts over 500,000 visitors to Trinity College every year and is regarded as Ireland’s greatest national treasure. It was written around 800 AD and contains a richly decorated copy of the four gospels in Latin text. In all, there are 680 pages. Two volumes are normally on display with one opened at a major decorated page and the other at a text opening. 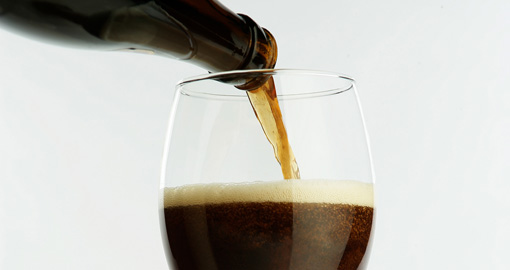 The beverage Guinness is known all over the world and is Ireland’s national beverage. So, when in Dublin on Ireland vacation, head to the Guinness Storehouse where the drink is made and enjoy an entertaining tour of the brewery. It was built in 1904 and is a revered historical site although a previous building on this site dated back to 1759. A tour of this seven-storey building is for the visitor, an experience dedicated to the history of the making of this world-famous beer. You start off on the ground level and learn about the brewing process. As you go higher, the theme changes to include other aspects of production such as the advertising and the type of bottles and cans used over time and many other things connected to the drink. When you reach the top level, you enter the Gravity Bar to enjoy a pint of Guinness which is included in the price of admission. The amazing panoramic views of Dublin and the surrounding area are worth the admission fee alone.

The City of Cork and Blarney Castle 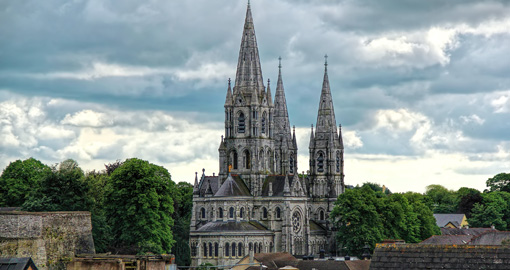 Cork, in many ways, is the quintessential Irish city on Ireland tours. The centre of Cork is located on an island surrounded by waterways with attractive Georgian avenues plus narrow streets and alleyways dating back to the 17th Century full of shops, pubs, cafes and restaurants. St Finn Barres Cathedral is something that will immediately catch your eye with its elegant structure and gargoyles. Inside you will find marble floor mosaics, a colourful ceiling and a bishop’s throne. The English Market is a very special place. There are many vendors inside offering all types of products and is a well-known Cork landmark. The Crawford Municipal Art Gallery has an excellent collection of paintings from the 17th Century to the present. A walk up Patrick’s Hill which overlooks the centre of the city is well worth doing for the views of Cork and way beyond. Blarney Castle is located just outside of Cork and is, of course, home to the famous Blarney Stone. There are many legends as to the origin of the stone. It is said it was a magical stone upon which Irish kings were crowned. According to legend, kissing the stone gives the person “the gift of the gab”. Surrounding the castle are some beautiful and quite extensive gardens. 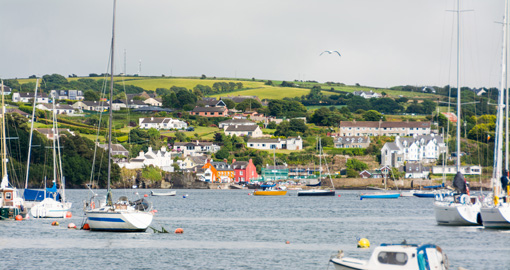 Situated a short distance on the coast from Cork, Kinsale is a very attractive, picturesque town with a harbour filled with sailboats bobbing in the water. It has been designated an Irish Heritage Town and has winding streets with galleries and small shops, bars and restaurants plus it is a place to enjoy a walk along the coastline or up Compass Hill which towers over the town. There are two old fortifications, Charles Fort and James Fort which guard the narrow entrance to Kinsale from the sea. Charles Fort is a 17th Century fortress which is well worth exploring. Kinsale is known as the “Gourmet Capital” of Ireland. It is also the place where the liner, the Lusitania sank in 1915. The 200-year-old Signal Tower has been converted into a museum dedicated to the story of this liner which was torpedoed by a German U-boat when 1200 lost their lives. 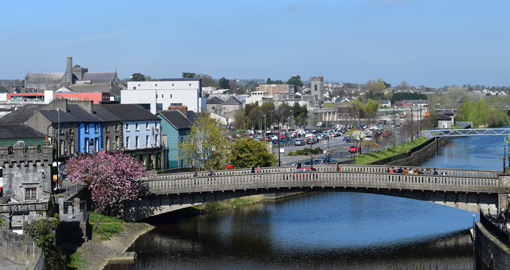 Kilkenny is located in the southeast of the country on Ireland vacations and can be reached easily from Dublin or Cork. It is a charming town with narrow, winding streets which give it an Old World feel as do the terraces of elegant Georgian houses. Right in the centre is the historic Norman Kilkenny Castle which is surrounded by a maze of alleyways and lanes and a nice park and a rose garden. St. Canice’s Cathedral has an excellent stained-glass window and the neo-gothic St. Mary's Cathedral is an impressive landmark due to its tower which rises above the city. The altar here is of Italian marble and relics of certain Irish saints can be found also. Rothe House, a merchant’s house built in 1594, is the headquarters of the Kilkenny Archaeological Society and has a museum with exhibits which include a Viking sword, a period costume collection and a quaint walled garden which is a reconstruction of an early 17th Century urban garden. Opposite the castle is the Kilkenny Design Centre selling original Irish handicrafts. 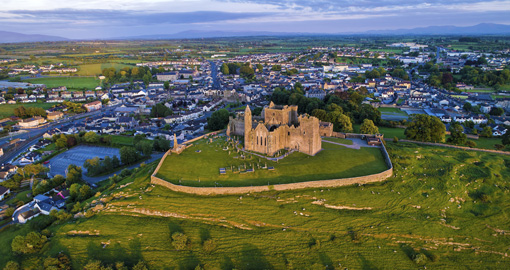 If you like legends, then visit the Rock of Cashel near the town of the same name. It consists of ancient fortifications rising from a green hill in the middle of the countryside. It was once the seat of the Kings of Munster for several hundreds of years before the Norman invasion of Ireland in the 12th Century. According to local mythology, the Rock of Cashel originated in a mountain 32 kilometres/20 miles from Cashel when St. Patrick banished Satan from a cave which resulted in the Rock landing in Cashel. The building perched on the rock is one of the most exceptional medieval architectural sites to be found anywhere in Europe. Most of the buildings on this site date from the 12th and 13th Centuries. The Rock of Cashel is made up of sturdy walls which encircle an enclosure containing a complete round tower, a 13th Century Gothic cathedral and a fine 12th Century Romanesque chapel, home to some of Ireland’s oldest frescoes and is a gem of Romanesque architecture with beautifully carved doorways. 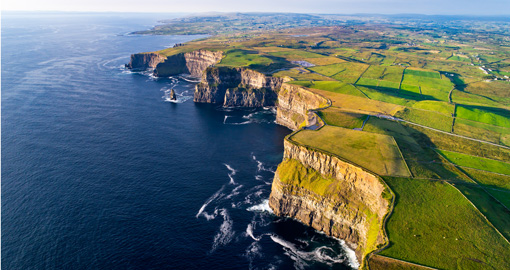 The Cliffs of Moher are located in County Clare on the west coast of Ireland. They are one of the most visited sites in the country. These spectacular cliffs rise above the Atlantic Ocean to a height of 214 metres/702 feet and stretch 8 kilometres/5 miles along the coast. O'Brien's Tower, a round stone tower near the midpoint of the cliffs built in 1835 is where, from the top of the tower, the views are wonderful. You can see the Aran Islands in Galway Bay and mountain ranges in Connemara as well as the Dingle Peninsula and Blasket Islands in Kerry. They are as much a historical landmark as they are a geographical phenomenon. 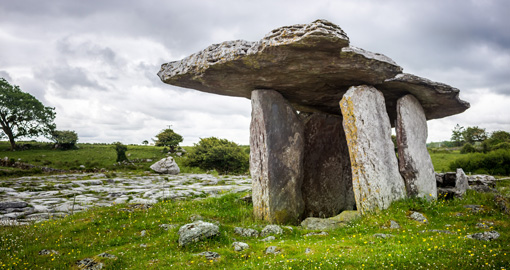 The Burren National Park is located not far from the Cliffs of Moher. It is a large area in size made up of grassland, scrub, woodland, lakes, cliffs and fens and can be described as both rocky and fertile. It is owned by the Irish government and maintained for conservation. There are wonderful views of the rugged shoreline cliffs from here. The karst (limestone) hills are rich in historic and archaeological sites which include several megalithic tombs and the nearby Corcomroe Abbey. There is a wealth of flora and fauna.

The Ring of Kerry, The Dingle and The Beara Peninsula 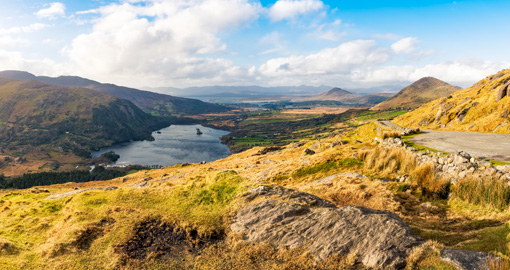 There are 3 promontories which protrude from the southwest coast of Ireland, all of which are equally beautiful and attractive.

The Ring of Kerry

is probably the best known for its spectacular beauty, ancient sites, stone forts, old monasteries, and several castles, all among a landscape carved out of the rock by the last Ice Age. The Ring is approximately 180 kilometres/112 miles in circumference and the main route follows the coast which is encircled by scenic mountains and lakes with views everywhere of the ocean.

To the north of the Ring of Kerry is the

which is about 48 kilometres/30 miles in circumference and must be driven in a clockwise direction. It is a mountainous peninsula containing Ireland’s second highest peak. The coastline consists of steep cliffs together with sandy beaches. The town of Dingle is traditionally Gaelic in character and has the claim to be the most western point in Ireland. This fishing port is quaint without even trying. Many pubs double as shops so you can enjoy a Guinness along with purchasing hardware items. Once again, as you travel around the Dingle, you experience amazing panoramic views of the ocean. Parts of the Dingle are extremely bleak and godforsaken. Add to this, the pounding waves against the cliffs, and you see why this particular peninsula has character.

To the south of the Ring of Kerry, is totally tranquil and unspoiled. It is certainly less visited than either the Ring of Kerry or The Dingle on Ireland tours. However, it offers just as much dramatic scenery with a number of skyscraping passes snaking over the mountainous terrain with awe-inspiring views of the surrounding countryside. It has two mountain ranges running down the centre, the Caha Mountains and the Slieve Miskish Mountains. The Beara Peninsula is 148 kilometres/92 miles around. However, you might want to cut inland and go over the dramatic Healey Pass which traverses the peninsula. One highlight is Ireland’s only cable car, which can be taken from the tip of the peninsula out to tiny Dursey Island. The island can also be reached by a short ferry ride. There are 511 historical sites on the peninsula, some dating back to 2000 B.C. that can be found, making it the location with one of the highest numbers of antiquities in one area in Ireland.