Limerick is a major city in the Republic of Ireland. It is Ireland’s third-largest city and just a short distance from Shannon airport in the west of the country. It makes a fascinating addition to most Ireland vacations, both as a city break and with its surrounding attractions.

Located in the south of Ireland’s west coast, Limerick’s climate is heavily influenced by the Atlantic Current and as such is very unpredictable. The overall climate of Limerick is mild and generally warm and temperate, however, there is significant rainfall year-round. The winter months from September to February are mild in temperature and experience the most rainfall, while the summer months experience warmer temperatures and less rainfall. Although even in the driest month, there is still a high chance of rain.

What are the top things to do in Limerick?

A Visit to Pery Square

You might want to start your explorations in Pery Square with its fine Georgian terraces dating back to 1835. Also here is the beautiful People’s Park opened in 1877 where you will find the Limerick City Gallery of Art. This wonderful collection of Irish art gathers works spanning the last 300 years. The gallery is the home of Eva International, Ireland's biennial art festival.

Just over the River Shannon which runs through the city is the 13th Century King John’s Castle with vast walls and towers built on the instructions of King John of England around 1200. A multimedia display gives an excellent presentation of the history of Ireland in general, and Limerick in particular. There are exhibitions on the castle's archaeology and the development of Georgian Limerick. In the courtyard, there is a medieval campaign tent, a blacksmiths forge and scenes from a 17th Century siege. 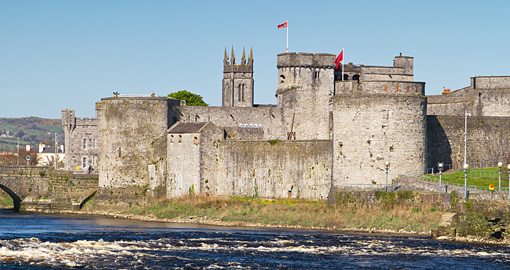 Just outside Limerick is the magnificent Bunratty Castle, probably Ireland’s most renowned castle. It dates back to 1425 and is the best-preserved medieval fortress in the country restored to its former glory. It contains mainly 15th and 16th Century furnishings, tapestries and works of art. There are evening medieval banquets during which certain guests can be banished to the dungeons below. Also here is the Folk Park with over 30 buildings which recreate a living village from the past with farmhouses, shops and streets. The Hunt Museum has one of Ireland’s best private collections of art and antiquities (over 2000 items) from the Neolithic Age to the 20th Century and includes works by Renoir, Picasso, Henry Moore and Yeats. There are artifacts from Greece, Rome and Egypt. Visitors are allowed to open drawers and look at the finest collection of Bronze Age, Iron Age, medieval and modern art treasures outside of Dublin.

St. Mary’s Cathedral, Limerick’s oldest and most historic building, was founded in 1168. Some original parts of the building still exist such as the West Door, the nave and the aisles. Experts believe that parts of the palace of an ancient King of Munster are incorporated into the present structure of the Cathedral.

Take in the Street Art

Limerick is known for its abundant street art which can be found in some unlikely places. Renowned street artists from all over the world come to Limerick to leave their mark with colourful murals and messages. Some of the ‘graffiti’ is exceptional, such as the Bearded Man and the ‘Hello Kitty.’ It’s worth doing a little advanced research so you know where to look.